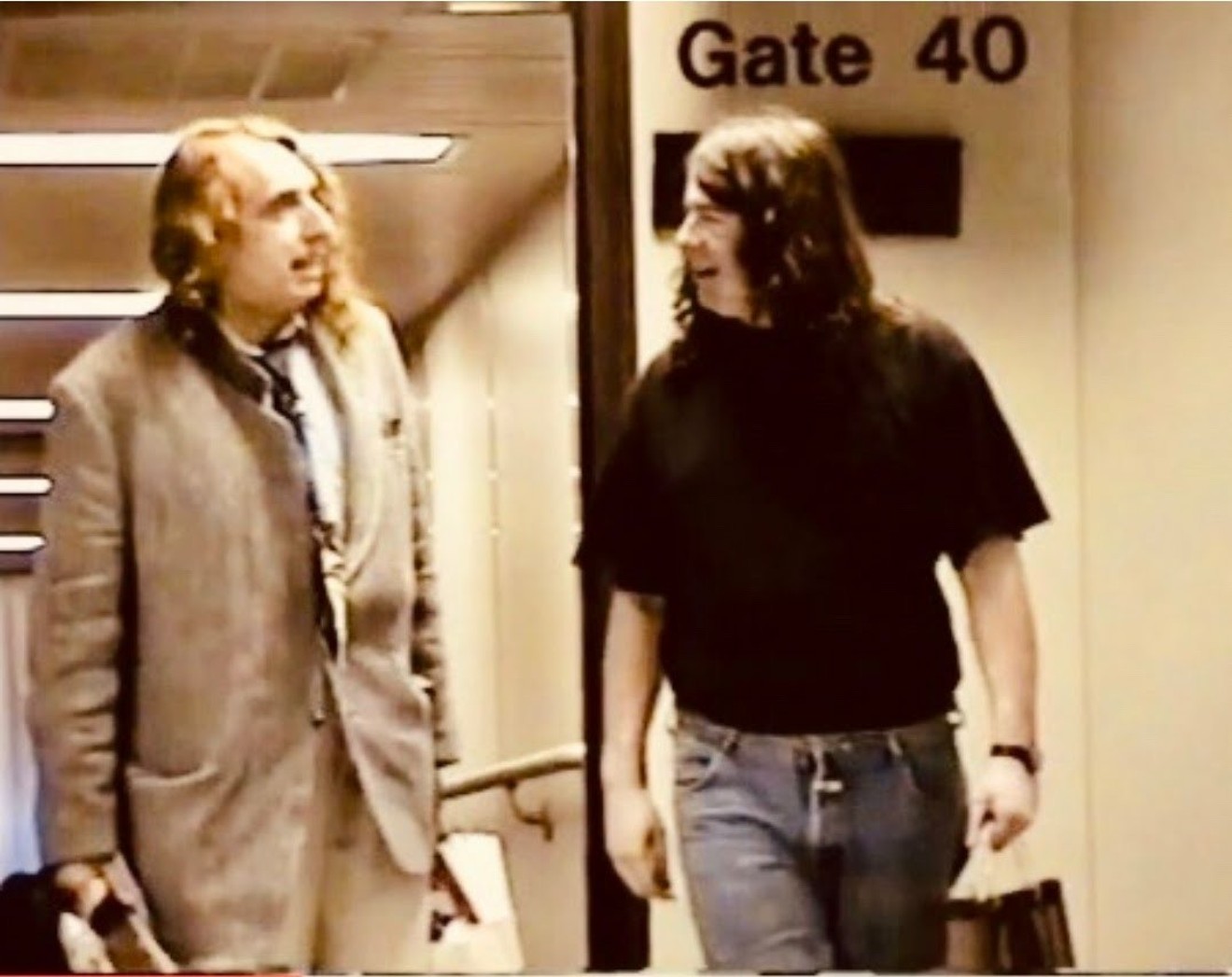 Bucks Burnett (right) picks up legendary musician Tiny Tim (left) at the airport in 1990 for one of Tiny's many concerts in North Texas. Burnett managed Tiny's career for the final third period of the pop star's career. Bucks Burnett Archives
Dallas music maven and 14 Records store owner Bucks Burnett dedicated a large part of his life to the career of the eccentric and incomparable Tiny Tim, the mischaracterized "novelty" musician who became one of music's most uniquely eclectic pop stars.

A new documentary called Tiny Tim: King for a Day is now in theaters and was screened during the recent USA Film Festival at the Angelika Film Center. Burnett says he received several invitations to the film festival screening but he declined the opportunity to sit in the audience because he has issues with the film's final cut.

"I've had three different people offer me free passes to the Tiny screening," Burnett writes in a text message. "Declined them all. So surreal to be at a point in my life where the first ever doc about Tiny is playing Dallas and I'm not going."

Burnett worked as Tiny Tim's manager from 1984 until 1996, produced the last two of his albums including 1996's Girl  — recorded with the Grammy-winning Denton polka band Brave Combo — and founded his official fan club. He and one of the film's producers, Justin Martell, who wrote the Tiny Tim biography Eternal Troubadour: The Improbable Life of Tiny Tim, on which King for a Day is based, confirm that interviews with Burnett were filmed but didn't make it into the film released in theaters.

The documentary fails to address what Burnett believes are key moments in Tiny Tim's story in the latter part of the singer's life leading up to his death in 1996 at the age of 64.

"They faced the same issue I had writing the book," Martell says. "How do you work in this thing that actually took place and developed over the space of almost two decades?"

King For a Day, directed by Johan Von Sydow of Memento Films and distributed through Juno Films, examines Tiny Tim's career and personal life through interviews with other notable names who knew and worked with him, such as Wavy Gravy and Laugh In creator George Schlatter. It also delves into Tiny's life through his diary entries, read onscreen by "Weird Al" Yankovic, and shows personal photographs and home videos that Martell says he obtained and arranged, giving the filmmakers "access to the Tiny Tim rabbit hole."

The diary entries, in particular, convey some of Tiny Tim's deepest thoughts about his career, faith and love life and the internal conflicts that all three created, but Burnett believes the film doesn't dig deep enough to truly understand the artist.

"To me, there's a tragic aspect to this film, and it's not because Tiny Tim becomes a joke and drops dead of a heart attack," Burnett says. "The tragedy is we're all cheated out of a great documentary, and we're stuck forever with this greeting card instead of a dark fucking novel that could have been a masterpiece."

The three-plus minute cut of Martell's four-hour interview with Burnett at his record store covers more than just the touring and albums he and Tiny Tim worked on together. One of the most interesting stories involves a woman named Stephanie Bohn whom Tiny had met through Burnett (and fell in love with) calling her "the eternal princess."

A big part of Tiny Tim's legendary rise to infamy happened with his first wedding in 1969 to Victoria Budinger, also known as Miss Vicky. The two tied the knot live on Johnny Carson's Tonight Show, and the spectacle surrounding the event made it the second most-watched moment in television history at the time, only behind the Apollo 11 moon landing.

Burnett says Tiny's boisterous romances created a deep conflict with his devout Christian faith, "which was lifelong and personal but also extraordinarily romantic. So he was constantly attracted to and getting involved with many beautiful women."

During one of Tiny Tim's appearances at Club Dada in Deep Ellum, Burnett introduced him to Bohn, "the eternal princess" who would eventually become known as "Miss Stephanie."

Bohn and Tiny became friends while Bohn gracefully turned down his many romantic advances. Tiny's love for Bohn would not die, however, even through his second and third marriages, Burnett says. 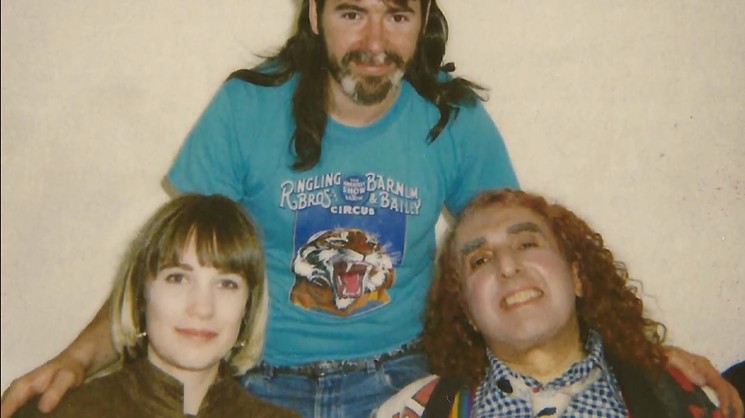 Bucks Burnett's (top) missing interview from the Tiny Tim (right) documentary King for a Day covers the pop star's undying love for Denton native Stephanie Bohn (left) whom he called his "eternal princess" until his dying day.
Justin Martell/Screenshot by Danny Gallagher
Burnett and Tiny Tim were working on the album Girl at a studio in Denton on Tiny's label, Victim (a combination of his and his first wife's name), but it took seven years to finish.

"Tiny Tim and Big Bucks had a falling out," says Brave Combo founder Carl Finch. "They would fix it every now and then and get back together."

Burnett says the friendship and partnership that grew around Tiny's headlining performance at Burnett's Edstock show at the Bronco Bowl — a financially unsuccessful but memorable concert centered on Burnett's facetious Mr. Ed Fan Club (which had many rock stars as members) — was tested after almost three years of virtually no contact. The souring relationship put the album and Burnett's plans for Tiny's celebrity comeback on hold.

"He was so fucked up about the unrequited nature of this love that he couldn't look at me without seeing her," Burnett says of Bohn. "We were Siamese twins in his mind."

The completion of Girl represents a key facet of Tiny's career and artistry. Finch says it showcases the musician's deep dedication to his craft and encyclopedic knowledge of musical history even if he knew "his place" as a bizarre novelty act who would wrongly get pegged as a failed celebrity or fallen star in the tabloids.

"Girl was on a legitimate, internationally distributed label," Finch says. "I think it stands out for that reason. He was putting out stuff with everybody. He was putting out one-offs here and there. Tiny was up for doing whatever all the time. Personally, I think it's a brilliant record."

Burnett says Martell fought hard to get these and other aspects of Tiny's life and career into the documentary,  but Martell says they ultimately decided to go another route. Instead, the documentary sums up the remainder of Tiny Tim's career as that of a washed-out celebrity struggling to make a comeback by any means necessary.

The film also talks about how Tiny performed in circuses and dinner theaters and took on the role of a killer clown in a B-grade slasher movie called Blood Harvest. The tone of these moments in the film is a somber one and may have been true to public perception, but Finch says Tiny Tim remained very busy with shows and recordings and embraced whatever role the pop culture ether chose to bestow upon him. Finch recalls seeing a magazine ad in the 1990s for Kenwood Stereos claiming they could "make anything sound better." The caption was followed with a picture of Tiny Tim clutching his ukulele and another caption underneath read, "But come on, even we have our limits."

"The guy never stopped working," Finch says. "He had people after him his whole life. I remember one time we were touring in the Midwest and saw a National Enquirer article about how Tiny Tim had fallen and now he was living in a ramshackle hotel in the Midwest. We find out where he is and he's actually staying at the nicest hotel in Des Moines, Iowa, in the penthouse because he's doing dinner theater there."

"They had a version that had it in there and they let me tinker with it and couldn't make it work without throwing off the back end of the movie," Martell says. "You have to mention Girl and Miss Stephanie, and they wouldn't do it, and it just came down to that."

The decision came down to presenting a narrative that the filmmakers thought would be easier for audiences to follow, especially those unfamiliar with Tiny Tim's musical legend or discography, "that would serve as a gateway to wanting to find out more," Martell says.

"They didn't do it maliciously," he says. "It came down to a discussion or debate that couldn't get it to work for the narrative they created for the film."

Burnett says even if he's disappointed audiences won't get to a side of Tiny Tim that he and others knew, he wishes no ill will or bad mojo on the film's release. In fact, he says he hopes it picks up the work he and others did to elevate Tiny Tim's genius to a whole new generation of music fans. 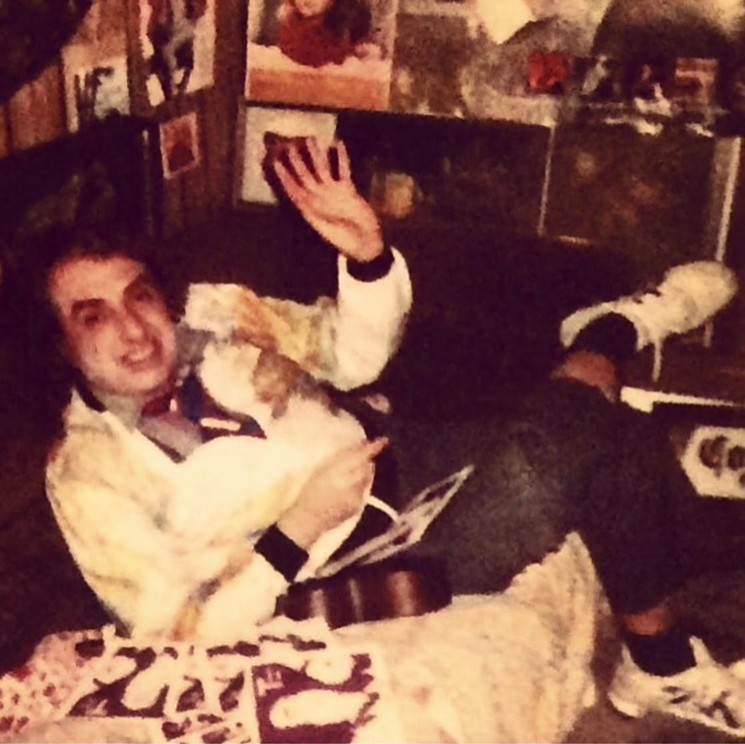 Tiny Tim smiles for the camera during a visit to his manager Bucks Burnett's Denton home in 1988.
Bucks Burnett Archives
KEEP THE DALLAS OBSERVER FREE... Since we started the Dallas Observer, it has been defined as the free, independent voice of Dallas, and we'd like to keep it that way. With local media under siege, it's more important than ever for us to rally support behind funding our local journalism. You can help by participating in our "I Support" program, allowing us to keep offering readers access to our incisive coverage of local news, food and culture with no paywalls.
Make a one-time donation today for as little as $1.