CPAC in Dallas Was a Different Kind of Strange CPAC attendees were told that the liberals wanted to indoctrinate their kids with critical race theory, take their guns away through door-to-door vaccine distribution, steal elections and flood the country with illegal immigrants. Jacob Vaughn
Dressed in a navy blue suit and reflective Pit Viper sunglasses, white nationalist Nick Fuentes stood outside the Anatole Hilton hotel in Dallas and readied himself for a press conference about how the Conservative Political Action Conference (CPAC) had banned him from attending.

Inside the hotel, thousands of people gathered over the weekend for CPAC's "America UnCanceled" convention, which drew bigwig Republican politicians like former President Donald Trump.

True to form, Fuentes vowed to deliver "the most racist, the most sexist, the most anti-Semitic, the most Holocaust-denying speech in all of Dallas this weekend."

He and a group of his supporters then went into the hotel, chanting “America first!” and “white boy summer!” They were removed by security shortly after. Joking, a couple of his followers told me QAnon would be giving a press conference across the street and that I should be there.

CPAC may have barred Fuentes, but a casual stroll through the conference suggested that plenty of far-right figureheads had, in fact, been welcomed with open arms.

Among the thousands of attendees roamed Stewart Rhodes, leader of the radical anti-government group Oath Keepers. The Oath Keepers has been implicated in the planning of the insurrection at the Capitol. More than a dozen Oath Keepers and supporters face conspiracy charges related to the attack. According to NPR, court documents indicate investigators are investigating Rhodes himself.

When the Oath Keepers leader was approached by a reporter with Salon, Rhodes got angry and told them to “fuck off.” Salon reported that CPAC organizers were coordinating with federal officials regarding Rhodes’ presence.

Also on hand were two members of the Proud Boys, an ultra-nationalist group known for attacking anti-fascists and others during protests. The Canadian government recently designated the Proud Boys a terrorist entity, but CPAC organizers apparently had no such qualms.

Still, there appeared to be a divide among the conference's attendees. Some of them felt like it was time for some tough love in the Republican Party — time to move on from Trump, talk of a fraudulent election and the QAnon conspiracy theories. Others walked around proudly wearing Trump 2024 hats and Stop the Steal T-shirts, clinging onto the fringe that Trump helped make mainstream throughout his four years in office.

On some issues spotlighted during the conference, however, they all stood united: critical race theory, so-called election integrity, border security and guns.

Throughout the three-day melee, speakers time and again insisted that liberals wanted to indoctrinate children with critical race theory, steal their guns, rig elections and flood the country with undocumented immigrants. They urged attendees to fight back.

The main speaking sessions at the conference opened with a goofy cartoon poking fun at the Biden administration, his policies and the media’s attention to his love of ice cream.

On stage at CPAC, he said Trump asked if he was ready to do it again. Patrick said Texas stands with Trump, CPAC, God and the Bible. “In 2024, Trumpism will rise again,” Patrick said.

Overall, the event, which would be capped off with a speech from the former president, seemed like a watered-down version of the Q-affiliated For God & Country Patriot Roundup event that took place in Dallas over Memorial Day weekend.

The conspiracy theory entails a so-called “deep state” controlled by pedophile Hollywood elites and powerful Democratic politicians, all of whom are supposedly acting against Trump. QAnon hardliners say only Trump can stop the supposed mass child sex-trafficking plot.

Followers will also often say everything that has happened, including Trump losing the election, is part of some divine plan, and one day soon, the former president will seize the country's reins once again.

Trump previously refused to disavow the conspiracy theory, saying he didn’t know much about it. “I do know [QAnon followers] are very much against pedophilia,” he said during a televised town hall in November. “They fight it very hard, but I know nothing about it.” Some followers saw his comments as an endorsement of the theory.

QAnon and Trump memorabilia sold side-by-side at CPAC in Dallas.
Jacob Vaughn
At the Q convention, speakers claimed the election was stolen and that the pandemic was a hoax.

Throughout CPAC, similar rhetoric came from the likes of Texas U.S. Rep. Louie Gohmert, former Texas GOP chairman Allen West and others with a history of flirting with QAnon and other baseless conspiracy theories. Gohmert and Allen both spoke at the Q convention, as did Texas Agriculture Commissioner Sid Miller, who was also featured at CPAC.

When Alex Berenson, a former New York Times reporter and current conspiracy theorist, lashed out at the country's mask mandates and vaccine guidance, the crowd broke out in applause. "The government was hoping that they could sort of sucker 90 percent of the population into getting vaccinated," he said. "And it isn't happening."

Dr. Anthony Fauci, the president's chief medical advisor and director of the U.S. National Institute of Allergy and Infectious Diseases, later told CNN that widely shared clips of Berenson's speech disturbed him. "It's horrifying," he said. "I mean, they are cheering about someone saying that it's a good thing for people not to try and save their lives."

The same crowd applauded Trump when he bragged that three vaccines were manufactured under his presidency.

Some CPAC attendees were also given a card outlining a seven-point plan to reinstate Trump as president “in days, not years,” according to Business Insider.

QAnon memorabilia has previously been discouraged at Trump rallies. CPAC organizers didn’t respond when asked if there would be such a rule at the Anatole Hilton. But on one of the many tables set up for vendors in the exhibition hall in the hotel lay a stack of Q T-shirts surrounded by Trump memorabilia. Another vendor sold toilet paper with images of Biden made to look like Hitler.

At CPAC, Gohmert suggested that the Jan. 6 attack on the Capitol was a leftist conspiracy and the resulting arrests were unjust. Gohmert likened himself to Martin Luther King Jr., arguing that he advocates for peaceful protests. “But we can’t let them intimidate us from not protesting,” he said. “That’s what this treatment of people that got arrested was all about — intimidation.”

Other speakers, including Trump, also downplayed the events at the Capitol and said the election was rigged. Many attendees believed them.

Trump easily won a CPAC presidential straw poll, with 70% of attendees saying they'd support him in another run for the White House. DeSantis only got a fifth of the vote. In a second poll omitting Trump, DeSantis received 68%. 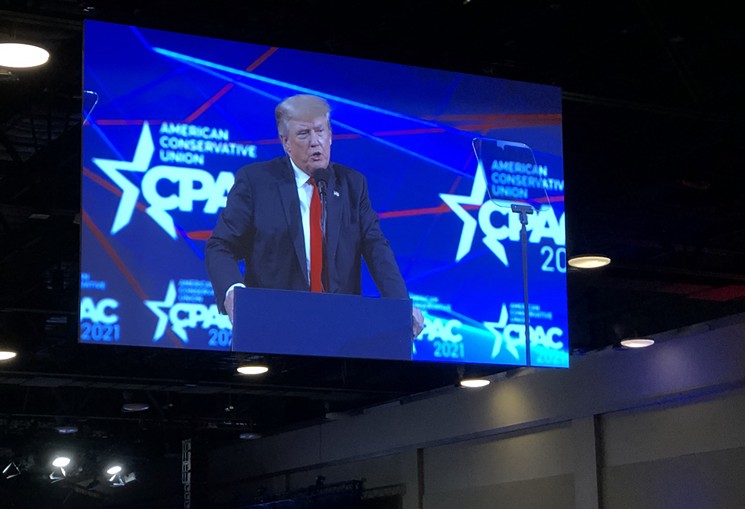 Trump was still the favorite among attendees, according to a CPAC presidential straw poll.
Jacob Vaughn
During his speech, Trump hinted at a possible 2024 run, downplayed the insurrection and continued to spread lies about the election.

“No evidence? There’s so much evidence,” Trump said. The audience erupted in chants of "four more years! and "Trump won!"

On the insurrectionists, he said, “People that are patriots or conservatives or Republicans, they stay in jail for extended periods of time. … We want law order. We demand law and order.”

Eugene Rivera made the trip from New Jersey to attend CPAC. He insisted the election was fraudulent. He said he was at the Capitol on the day of the insurrection. “I went there with my brother," he said. "I didn’t at all feel threatened by any type of white supremacists. That’s all fake news. I have video to prove it on my phone right now.” (Video of the riot shows demonstrators attack Capitol police, vandalizing the Capitol grounds and storming the building.)

Rivera thinks the country is going down the drain. He's hoping Trump will run in 2024 with Florida Gov. DeSantis as his vice-presidential candidate. He also hopes for a spring cleaning of what he calls "Republicans in name only," or RINOs, in the party. The number of them is dwindling, he said, and what will be left is President Trump’s Republican Party. “This country, six or seven months into the Biden presidency, is a disaster,” he said.
KEEP THE DALLAS OBSERVER FREE... Since we started the Dallas Observer, it has been defined as the free, independent voice of Dallas, and we'd like to keep it that way. With local media under siege, it's more important than ever for us to rally support behind funding our local journalism. You can help by participating in our "I Support" program, allowing us to keep offering readers access to our incisive coverage of local news, food and culture with no paywalls.
Make a one-time donation today for as little as $1.