Dallas Mayor Eric Johnson wants to save $6.5 million by slashing city civilian employees' salaries by as much as 25%. Brian Maschino
Dallas has already furloughed hundreds of city employees because of the pandemic, but as the City Council works on drafting a budget for what promises to be a tight 2020-'21 fiscal year, the mayor is proposing further cuts to civilian employee salaries. In an email updating the city on budget talks, Mayor Eric Johnson said he wants to look into "defunding the bureaucracy" with cuts to top-paid city staff — excluding the police.

Johnson proposed salary cuts for more than 1,300 non-uniform employees making $60,000 annually or more. These cuts could add up to over $6.5 million in savings for the city.

"If Dallas City Hall is going to truly reflect its 'service first' mantra amid the pandemic, your city councilmembers must be willing to look at defunding the bureaucracy," Johnson wrote, applying a twist to widespread calls to "defund the police."

The lower end of these cuts would affect the salaries of some city librarians, electricians, engineers and many others. The cuts to the midrange salaries, $100,000 to $159,000, would include positions like directors, assistant directors and employee retirement fund compliance officers. When comparing maximum pay, librarians and city electricians make more in Houston then they do in Dallas.

The proposed salary cuts are as high as 25% for the half-dozen civilian employees making $250,000 or more and step down from there. The 490 employees whose $60,000 to $69,999 salaries are paid from the city's general fund would see 1% cuts under the mayor's proposal. Johnson said this is not meant to be a slap in the face to these employees. Instead, it's a recognition of the unprecedented economic impact the pandemic has had on Dallas. 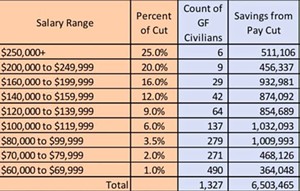 If the mayor's proposal is implemented, over 1,300 civilian city employees could see cuts to their salaries.
City Mayors' Office
Businesses in the private sector have made cuts. Johnson said City Hall should have to share their pain instead of expecting Dallas residents and businesses to absorb cuts to services without tax relief.

“I support Mayor Johnson’s focus on service delivery and am always willing to consider ways to increase our efficiencies in an effort to free up funding that can be used to improve the daily lives of our residents,” said Adam McGough, deputy mayor pro tem.

Johnson has been floating this idea since the end of last month when he laid out his budget priorities. But in an Aug. 7 memo, City Manager TC Broadnax, who makes over $400,000 and would be included in the top tier cuts, said he didn't recommend slashing civilian employee salaries.

Catherine Cuellar, director of communications, outreach and marketing, said many employees the cuts would apply to are eligible for retirement. If the proposed cuts happen, these employees would likely retire in waves during the weeks leading up to the start of the next fiscal year. This would allow them to get their full compensation in retirement at their higher pay level, Cuellar said. The city would then have to pay for any accrued vacation time for those employees and then pay to have those positions refilled.

Cuellar said the cuts could also result in high turnover in Dallas' leadership positions, which could cause disruptions in a number of city departments.

Johnson wrote that he already has some ideas about where the money from the salary cuts could go but wants to hear feedback from the community. He said there is still much to discuss, but it's already clear that the proposed budget doesn't align with some Dallas residents' priorities, which include defunding and reforming the police.

One example of a program that should be spared the ax, Johnson suggested, is painting bike lane stripes on the city's streets, which perennially receive too little money for genuine maintenance.

Johnson said the $500,000 cut to the bike-lane funding in Broadnax's proposed 2020-'21 budget should be reconsidered. During the first City Council budget meeting this month, councilmember Omar Narvaez also said he would like this money put back.

Not only are bicycles as a means of exercise in demand during the pandemic, Johnson said, but Dallas residents also use them to save gas money or because they don't have a car. "This is, in part, an equity issue," Johnson said.

At last Wednesday's meeting, council members voted in favor of advance funding agreements to expand the Dallas trail system. Johnson said he wants to see the same investments in the city's bicycle infrastructure. "Doing so is good for the environment, good for mobility and good for urban development," Johnson said. "Bike lanes, whether you use them or not, will help the city grow and thrive for years to come."

If the mayor really wants to fund the city's bike infrastructure, there are plenty of cuts, which Broadnax also doesn't recommend, that could be made to the Dallas Police Department budget.

In another Aug. 7 memo, Broadnax presented budget reduction options for DPD. The cuts include eliminating the hiring of 150 new officers and several reductions in force that could save the city over $90 million in the next fiscal year.


Although the savings could be huge, Broadnax says he does not recommend the DPD cuts because these reductions would affect the level of service that the department provides. This week, Gov. Greg Abbott suggested the state should freeze property tax revenue in cities that defund their police. In response, Johnson said it is imperative that Dallas invest in a highly trained and well-led police department that emphasizes community policing.

On top of the furloughs, there are plans to consolidate and make cuts in several offices in the next fiscal year and Johnson said more difficult decisions lie ahead. "Of course, the budget doesn't present many easy choices this year," he said. "Needs abound in Dallas right now, and the resources are going to be more scarce than in years past."
KEEP THE DALLAS OBSERVER FREE... Since we started the Dallas Observer, it has been defined as the free, independent voice of Dallas, and we'd like to keep it that way. With local media under siege, it's more important than ever for us to rally support behind funding our local journalism. You can help by participating in our "I Support" program, allowing us to keep offering readers access to our incisive coverage of local news, food and culture with no paywalls.
Make a one-time donation today for as little as $1.