From left: Tammy Dombeck, Amanda Zitzman and Chelsey Davis Facebook, KDVR, ABC Arizona
The job listing was clear. KTVT-TV (Channel 11), Dallas' CBS affiliate, needed a traffic reporter with "strong knowledge of local traffic in the Dallas/Fort Worth area" and at least five years of professional broadcasting experience. The station seemingly had the perfect candidate, too. Tammy Dombeck, a longtime fixture on local morning airwaves, was the station's fill-in traffic reporter, taking over whenever Whitney Drolen, whose October 2014 resignation caused the job opening, couldn't make it in to tell North Texas drivers about the traffic nightmares waiting to pounce during their morning commutes.

Dombeck, who was 42 at the time, applied for the job, making sure she went through the appropriate channels and submitting a written application and a video reel. CBS 11 didn't give her the gig. Instead, the station offered the job to 27-year-old Amanda Zitzman. Zitzman, now an early morning reporter at Denver's Fox affiliate, turned down the job.

Rather than turning to Dombeck, CBS 11 hired Chelsey Davis, a 24-year-old former Arizona Cardinals cheerleader, as its traffic anchor. According to the U.S. Equal Employment Opportunity Commission, Zitzman and Davis weren't picked over Dombeck because they were more qualified or more experienced. They were offered the job, the federal agency says, because they were younger than Dombeck.

"Tammy [Dombeck] was clearly qualified for the position of traffic reporter," said Joel Clark, senior trial attorney for the EEOC. "We are confident that the station's ratings were favorable during the time that she filled in as the morning traffic reporter. But the station clearly preferred a younger face and a less-qualified applicant based on unfounded stereotypes about female reporters in broadcast television."

Davis quit CBS 11 in 2016 to move to Arizona with her new husband, former WFAA-TV (Channel 8) anchor Brandon Hamilton. Like Davis, replacement Madison Sawyer, nee Adams, is blonde and in her 20s. Adams had no previous traffic reporting experience before the station hired her.
click to enlarge 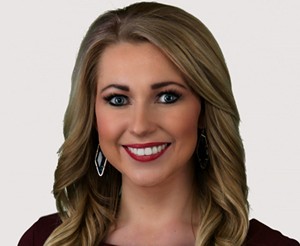 Whenever the EEOC believes age discrimination has happened in the workplace, it is required by law to help employers and employees try to reach a settlement in the case. When it is unable to do so, as in this case, the EEOC can pursue further legal action against the employer. And on Tuesday, the EEOC sued KTVT in federal court for age discrimination against Dombeck.

In a statement emailed to the Dallas Observer, CBS 11 denied any discrimination in its hiring practices. "KTVT respectfully disagrees with the EEOC's current assessment and looks forward to resolving this matter," said Lori Conrad, KTVT's director of communications.