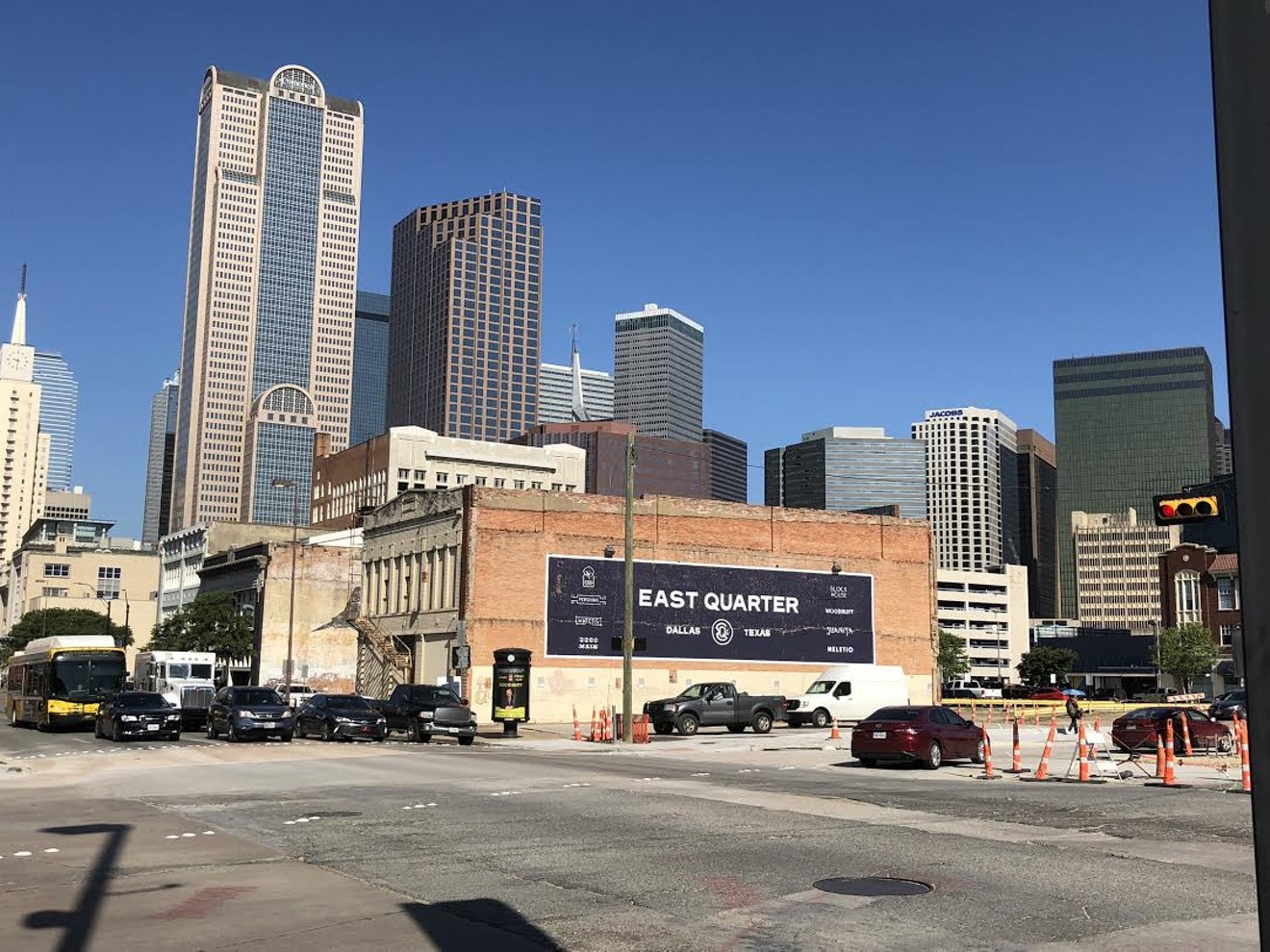 East Quarter, Dallas' newest district, is under construction. The project, led by Todd Interests, will refurbish 18 historic buildings in the area between downtown and Deep Ellum. Dalton LaFerney

Deep Ellum and downtown Dallas meet right around 2200 Main St., where a nightclub called Purgatory used to sit. It was a great concept — three floors with different designs, one heaven, one purgatory and the other hell — that quickly went wrong, and the club served as a touch point in the city’s struggle to repurpose downtown.

Partygoers witnessed bouncers punching people, and one bouncer said in a lawsuit that a customer slashed at his throat with a broken bottle. The Dallas Morning News wrote a story in 2007 about the club, partially based on police reports, which showed that, among other documented crimes, someone was “hit with a small weight attached to a heavy chain.”

For a long time, developers have been unable to figure out what exactly to do with the area near Purgatory. It’s been kind of an awkward place — not quite Deep Ellum, a place to cut loose, and certainly not in the Main Street District or the business district, a place for professionals. And the abundant upscale townhouses call attention to the area’s changing identity.

But there seems to be a clear direction now, and next week the old Purgatory nightclub building will be torn down. It’s making way for a project the city calls East Quarter, the newest district to be added to Dallas’ many neighborhoods.

East Quarter will combine work spaces with living spaces. The goal is to refurbish 18 of the area’s historic buildings and open them up to creative companies similar to Tractorbeam, the digital marketing company, which renewed its lease Thursday morning in what soon will be East Quarter.

“It’s been Dallas’ best-kept secret,” says Shawn Todd, the CEO of Todd Interests, the company leading the multitiered effort to bring East Quarter to life. He said the project has been underway for the past two years, “but really this neighborhood has been over a hundred years in the making.”

With all of the development that has been done in the Farmers Market area, Deep Ellum and downtown, Todd said, East Quarter will serve as the final step in joining the three neighborhoods. “All of these things now can connect,” he promised.

“It will make all the neighborhoods more seamless.” – Downtown Inc. CEO Kourtny Garrett


Todd Interests has deployed Andres Construction, one of Texas’ leading companies that repurposes old buildings, to do the refurbishing. The architect is from OmniPlan. The Dallas 360 plan and Parks for Downtown Dallas are guiding the project, and the latter group's latest project, the new Hardwood Park, will touch East Quarter. Peloton Commercial Real Estate is will lease the office spaces once they’re available.

Dallas chef and restaurateur Nick Badavinus, who owns places such as Neighborhood Services and Montlake Cut, said he will open a new restaurant in the Magnolia Oil/KLIF Building. He’s the first to commit to the new neighborhood.

From its view high above Dallas, in the Bank of America Building downtown, Downtown Dallas Inc. sees East Quarter as an opportunity for the city to showcase to residents and visitors alike the value of connectivity among Dallas’ many neighborhoods.

“It will make all the neighborhoods more seamless,” Downtown Dallas Inc. CEO Kourtny Garrett said. She dates the downtown revitalization efforts to the late 1990s. “Twenty years” for this to finally happen, she said, “really isn’t that much time.”

Garrett credits much of the struggle to the historic buildings because they are a delicate undertaking. They require more care, and there are more hoops to jump through to renovate them. Also, multiple business owners had to be dealt with. The past two years have been spent acquiring the 18 properties from the five owners.

“All of this construction will be completed by the end of this year,” Todd said.
KEEP THE DALLAS OBSERVER FREE... Since we started the Dallas Observer, it has been defined as the free, independent voice of Dallas, and we'd like to keep it that way. With local media under siege, it's more important than ever for us to rally support behind funding our local journalism. You can help by participating in our "I Support" program, allowing us to keep offering readers access to our incisive coverage of local news, food and culture with no paywalls.
Make a one-time donation today for as little as $1.