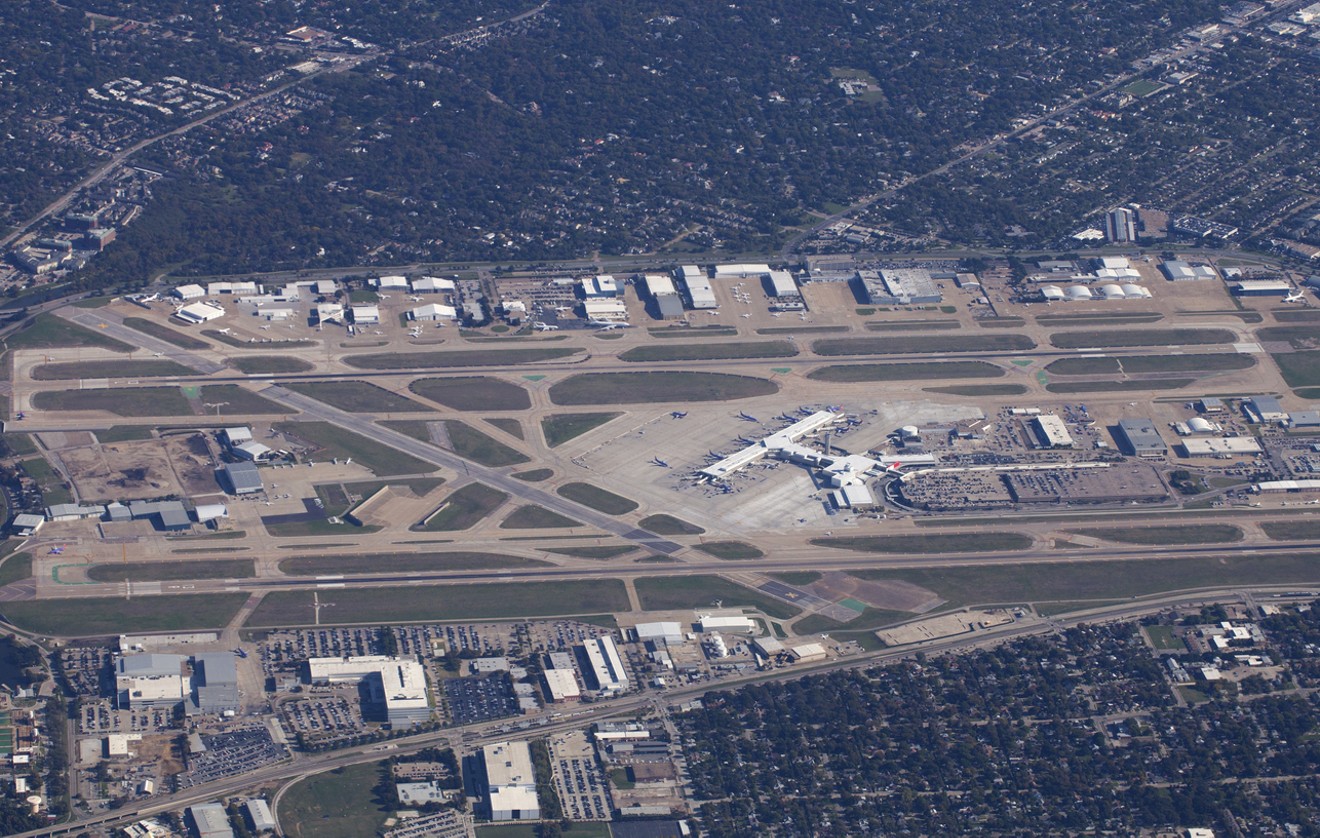 For decades, residents around the Dallas Love Field airport have been fighting for some peace and quiet. iStock
In two three-month periods last year, residents in Dallas made a total of nearly 3,800 complaints about noisy aircraft flying in and out of Dallas Love Field Airport. During a meeting of the Environment and Sustainability Committee on Monday, city officials will discuss how they can better contain the noise.

The Federal Aviation Administration (FAA) is responsible for the National Airspace System in the U.S., directing traffic in and out of Dallas Love Field. The city has its own department of aviation, which is monitored by the FAA to ensure they’re in compliance with all regulations.

Residents near Love Field have been making a stink about all the noise for decades. In 1980, the Love Field Citizens Action Committee was created, and the following year, the Dallas City Council adopted its voluntary noise control program.

In ’81, the Love Field Environmental Advisory Committee chose a consultant to look at and make recommendations on how the city’s voluntary noise abatement program could be more effective. The committee reviewed 15 recommendations.

The City Council at the time approved seven of those recommendations to be included in Dallas’ voluntary noise program. The same year, Southwest Airlines made a promise to residents near Love Field. The deal was that the airline would voluntarily phase out its louder aircraft and replace them with quieter ones.

Residents at the time, like then-president of the Love Field Citizens Action Committee T.H. Golson, got vocal again when they realized the airline wasn’t holding up to their end of the bargain.

“We’ve done everything we could to compromise,” Golson told D Magazine back then. “Now we feel violated, that we’ve been lead down a path. We’re very frustrated, disappointed and, believe me, a lot of people are downright angry.”

In 1982, Love Field implemented its nighttime preferential runway measure. Under this, aircraft weighing more than 12,500 pounds are supposed to use a different runway between 9 p.m. and 6 a.m. Aircraft are also prohibited from engine run-ups between midnight and 6 a.m. The city also asks operators to avoid run-ups after 10 p.m., but this is voluntary.

Four years later, the airport had its first noise program review. In the ’90s, some public schools were enrolled in a soundproofing program to make all the noise easier to bear, and the feds stepped in to try to make air travel quieter across the country. Congress passed the Airport Noise and Capacity Act of 1990, which replaced all of the louder Stage II aircraft flying in and out of the U.S. with the quieter Stage III aircraft by the end of the decade. The act also moved noise abatement and mitigation authority away from local governments and into the hands of the FAA. Airports with restrictions from before the law was passed were grandfathered in.

In 2017, the Aviation Department also approved a new way of monitoring the noise, which is still used today.

According to the July 15, 2021,  Love Field Environmental Advisory Committee meeting agenda, there were 3,773 noise complaints stemming from the airport in the span of three months.

A majority of those, nearly 95%, said the planes flying overhead were just too loud. Another 166 complaints were about aircraft flying too low, too early and too loudly. Most of the complaints came in between the hours of 6 a.m. and 9 p.m. However, those complaints dropped significantly in the following months. From October to the end of 2021, there were only 24 noise complaints from the airport’s operations.

After the Environment and Sustainability Committee meeting Monday, city staff will touch base with residents in the area as well as officials at the airport to get feedback on how to beef up noise control at Love Field. After that, changes will be put on the City Council’s agenda for a vote.
KEEP THE DALLAS OBSERVER FREE... Since we started the Dallas Observer, it has been defined as the free, independent voice of Dallas, and we'd like to keep it that way. With local media under siege, it's more important than ever for us to rally support behind funding our local journalism. You can help by participating in our "I Support" program, allowing us to keep offering readers access to our incisive coverage of local news, food and culture with no paywalls.
Make a one-time donation today for as little as $1.