Grim Calculus: Deaths for an Economy and Maybe Somebody's Reelection

Is President Donald Trump making a reelection calculus by which lives would be sacrificed in order to re-crank the economy? Gage Skidmore
In the debate on opening up versus shutting down, a dark picture is emerging, with national ramifications but also with some nasty roots closer to home. A truly terrible political calculus may be afoot.

The calculus would be this: that the nation will swallow the cost in human lives of reopening the economy if that cost is paid mainly in the lives of non-white immigrants, prisoners and old people in Medicaid nursing homes.

And let’s start local. Tuesday, Accion America, a Dallas-based social activism group with a solid track record for credibility, held a press conference leveling a barrage of disturbing charges against Quality Sausage Co., a local meat-processing plant. The core accusation is that when the company learned its workers were infected with COVID-19, it began paying them thousand-dollar bonuses to keep coming to work.

The plant closed last Friday. In response to my request Wednesday, the company provided a detailed statement outlining a number of steps taken before the closing to control infection among workers and to ensure food safety. The company said its guidance from the Centers for Disease Control and Prevention has been that food contamination is not an issue with COVID-19.

“Quality Sausage Company has temporarily paused operations so we can fully assess our response to the COVID-19 crisis, including completing testing of all employees,” the statement said. “We have taken this action as a way to help protect the health and safety of our team members and expect to conclude our review during the week of April 27.”

Wednesday, Carlos Quintanilla of Accion America gave me his version of events at the plant: “People started testing positive around April 7,” Quintanilla said. “Because the demand and the pressure is so big, they (the company) started saying (to workers), ‘We are going to give you a bonus of $1,000. Come on in if you need to work, and those who don’t want to work, we understand.’"

“Quality Sausage Company has temporarily paused operations so we can fully assess our response to the COVID-19 crisis, including completing testing of all employees.”— Company statement

The coronavirus problem is not unique to Quality Sausage Co. If anything, meatpacking deaths are an epidemic within the pandemic, as many plants across the country have gone down in the face of intense outbreaks. The Texas Tribune this week published a detailed report by Alex Ura on a coronavirus catastrophe unfolding at a meat-packing plant in Cactus, Texas, at the top of the Panhandle.

In all of these cases, a common factor is the physical proximity of workers in the plant required by the work itself. But another consistent theme is that workers in American meat-packing plants tend to be non-white immigrants and refugees from all over the world. In Cactus, the labor force, once Mexican and Central American, is now mainly Laotian, Vietnamese, Sudanese, Burmese and Somalian, Ura reported.

The collapse of the meat-packing industry, if that’s what we are looking at, would have a disastrous domino-effect on the entire food supply chain. At a certain point animals cannot be stored like canned goods; they have to be slaughtered, whether there is a buyer for them or not.

Labor leaders immediately fired back that the Trump meat-packing order was virtually bereft of measures to protect workers. Richard Trumka, president of the A.F.L.-C.I.O., tweeted: “Using executive power to force people back on the job without proper protections is wrong and dangerous.”

Also Wednesday, David Frum, a former speech-writer for President George W. Bush, postulated publicly that a Trump re-election strategy is emerging in which Trump makes the calculation suggested above: “Trump is consciously choosing to risk higher virus casualties in Q2 in hope of jolting the economy into revival in Q3 to save his reelection in Q4. It's a desperate gamble to save himself by sacrificing others. It's also not very likely to work.”

I wrote yesterday about the suburban community of Colleyville, an affluent enclave where some residents, encouraged by the mayor, have been proudly and somewhat notoriously flaunting their disregard for social distancing and safe-at-home measures. Many Facebook commenters noticed the same thing I did about the Colleyville residents seen on TV crowding into restaurants. Exactly unlike the people who work in meatpacking plants, the Colleyville residents on TV waving American flags and giving the finger to social distancing are all white.

Those who speak on TV express bravado, as if they do not expect or worry about becoming infected. And at least for a while, that may make a certain sense. Affluent white people do not work in meat-packing plants, ever. If one ever did, it would be to write a novel. 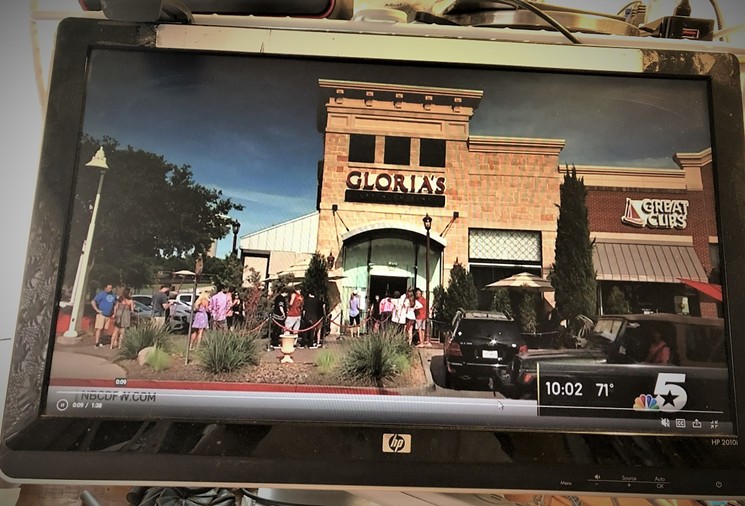 If someone from Colleyville went to work in a meat packing plant, it would be to write a novel about it.
Jim Schutze
But we could ask ourselves this about Frum’s thesis: Would the president have been so quick to order people back to work in the packing plants without protections if through some bizarre quirk of fate most of the workers were those white Colleyville people we have been seeing on TV? And how much bravado and flag-waving

“It’s not only the workers at Quality who get infected but everyone they became associated with, the babysitters, the grocery store employees, the gardeners."— Carlos Quintanilla

would there be coming from Colleyville then?

If the president’s calculus is to sacrifice lives in order to win reelection on the economy, Frum said he thought the plan is “not very likely to work.” We might ask ourselves why.

Let’s say he gets the economy cranking again. The fact is that a good portion of Trump’s support before the pandemic came from people who found him personally objectionable but didn’t want to rock the boat as long as the economy stayed hot. So why wouldn’t those same people return to that same mentality if Trump could show he had heated up the economy again?

Or are we looking at the wrong thing? If the calculus is fundamentally racist, if the white nation is willing to write off non-white deaths in order to make money, the calculation depends on the deaths remaining mainly non-white. All bets are off when death comes to Colleyville.

Quintanilla told me these stories from the last few days: “I just got a call from this lady. She worked at Quality Sausage. She came home and infected her husband. He infected their son. They don’t know how many people may have been infected by their son.

“I have another lady. She took care of one of the children from an employee of Quality Sausage. That lady comes and picks up her children. She infects the caregiver. The caregiver infects her own children. The children are infected, the woman is infected, her husband is infected.

“I have another guy who lives with other guys who don’t work at Quality. They work at construction. They share an apartment. You know, it’s not unusual for Mexicans to have six or seven people in an apartment. He infects everybody in that apartment.

“It’s not only the workers at Quality who get infected but everyone they became associated with, the babysitters, the grocery store employees, the gardeners. The virus doesn’t discriminate.”

And look around. Look around Colleyville. Look around America. Who are the workers? How many white people do you see doing hard manual labor, domestic labor, hotel service work, restaurant labor?

The sacrificial calculus is based in part on one assumption that is not untrue. The immigrants and the non-white poor have no choice. They have to go back to work, whether they will be protected or not.

A number of states have already announced that workers who decline to return to work at reopened companies will be deemed “voluntary quits,” no longer eligible for unemployment money. By now we have all seen the miles-long lines of people seeking food from the food banks. Those lines are a whip, and the whip is hunger.

So, yes, the calculus is correct in that one assumption. Those workers will have to go back to work. But Quintanilla points out a terrible irony in the calculus: “Because they need to work,” he says, “they are going to go work and put their lives at risk.”

Sacrificing the lives of certain people so that another kind of people can have a good economy won’t work, because the virus is hungry. And all of us, all kinds and colors, all of the social and economic stripes, all the nationalities: we all taste the same.
KEEP THE DALLAS OBSERVER FREE... Since we started the Dallas Observer, it has been defined as the free, independent voice of Dallas, and we'd like to keep it that way. With local media under siege, it's more important than ever for us to rally support behind funding our local journalism. You can help by participating in our "I Support" program, allowing us to keep offering readers access to our incisive coverage of local news, food and culture with no paywalls.
Make a one-time donation today for as little as $1.