Conservative Officials on Texas-Mexico Border Are Declaring an 'Invasion.' Critics Say There Isn't One. 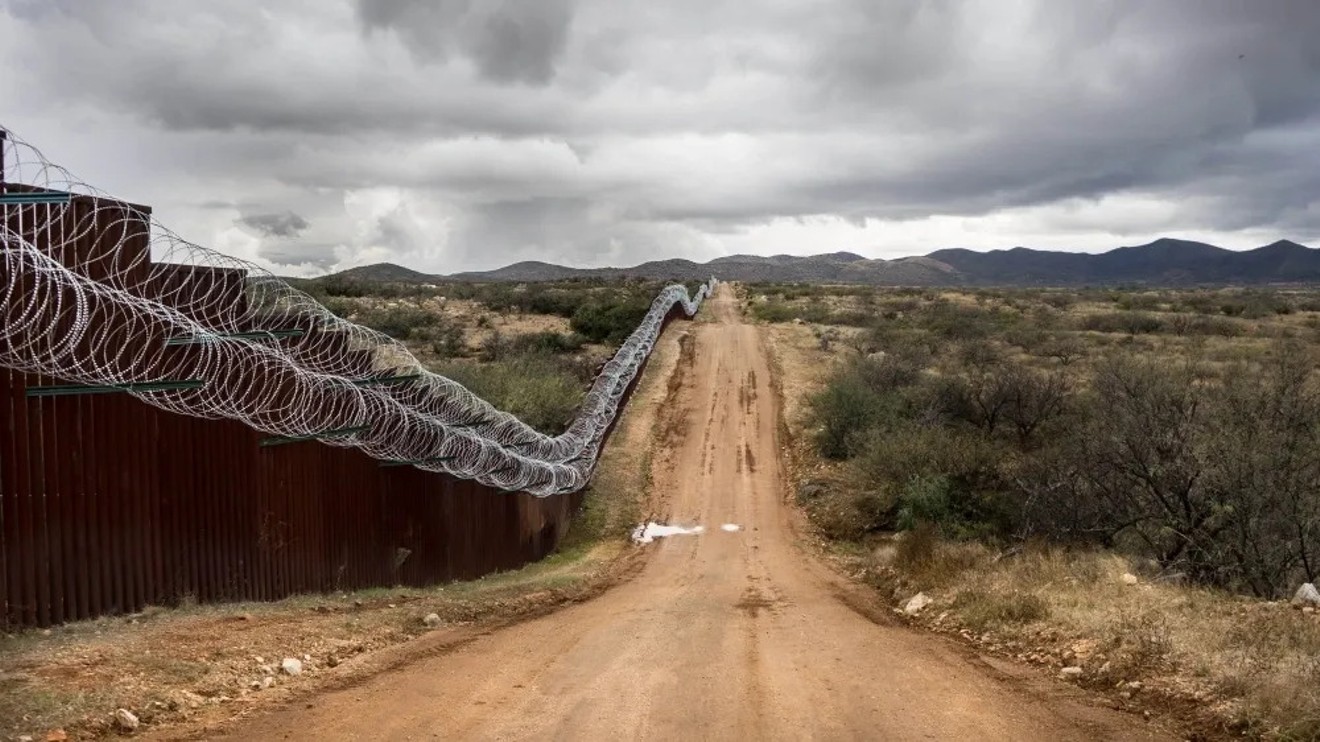 Over the years, border vigilantes have targeted both migrants and humanitarians alike. Patrick Strickland
Gathered in front of the press corps in South Texas on Tuesday, a Baptist pastor lowered his head and delivered a solemn prayer. Shortly after whispering “amen,” local leadership from multiple border counties began warning of the “invasion.”

Several officials announced Tuesday afternoon that they have declared an invasion at the state’s southern border. Advocates say doing so could potentially grant the state broader border powers.

Terrell County Judge Dale Lynn Carruthers on Tuesday claimed that in May alone, 49 “illegals” were apprehended in the pasture behind her house. She then warned that her border community’s some 1,000 residents “live in fear” each day.

“I’m here to let you know the invasion is real and that we are doing the best we can with limited manpower,” she said. “Terrell County has the least to offer and the most to lose.”
Conservative leaders in Texas and beyond have ramped up attacks on people crossing the border in recent months. While some say the invasion declaration is necessary to safeguard U.S. citizens, critics have widely panned it as a political stunt with potentially deadly consequences.

“All strategies remain on the table as Texas continues stepping up in the federal government’s absence," a spokesperson for the governor said by email Tuesday.

In part, the spokesperson added: "While President Biden ignores the ever-growing humanitarian crisis, and Congressional members visit the border for photo-ops and then return to Washington to do nothing, Texas has deployed thousands of Texas National Guard soldiers and DPS troopers and spent over $4 billion of Texas taxpayer money to secure our border, including building our own border wall, erecting strategic barriers, and sending significant resources to help our local partners as was mentioned repeatedly in the Brackettville press conference."

But Efrén C. Olivares, immigrant justice deputy legal director for the Southern Poverty Law Center, said he “disagrees with the entire framing.” The way he sees it, the "invasion" declaration is nothing more than another political stunt ahead of the midterm elections.

“To refer to anything as an ‘invasion’ … has this militarized connotation to it, as if we are at war with immigrants,” he said. “And even though that might be what some of these anti-immigrant elected officials would like, that is very much not the case.”

Olivares said border-crossers are often women and children fleeing persecution, poverty and life-threatening scenarios. They come to the border seeking protection and opportunity.

“The United States prides itself on our history as a refuge and a nation comprised primarily of immigrants,” she said via email. “There is absolutely no basis in our history for viewing families, children and adults coming to the country to seek protection and opportunity as an 'invasion.'”

In late June, the U.S. Supreme Court decided that the current presidential administration can end the Trump-era “Remain in Mexico” program. The policy forced border-crossers seeking asylum to stay in Mexico while their cases slowly moved through the U.S. immigration courts. It also thrust certain asylum seekers into violent situations, squalid living conditions and other threatening scenarios.

"You’re describing migrants as an enemy of the state, and that’s a little scary." – Heidi Beirich, Global Project Against Hate and Extremism

Abbott and other Texas Republicans have buckled down on their anti-immigrant rhetoric ahead of November’s midterms. The governor recently cautioned against a so-called “caravan” supposedly heading to the border, a notion refuted by immigration experts.

He's also touted his controversial security initiative Operation Lone Star as necessary to keeping the state safe. But some critics have slammed the effort, which has deployed Department of Public Safety and Texas National Guard officers to the border, as little more than an expensive and ineffective political exercise.

In a March 4 video, Abbott bragged about the one-year anniversary of the endeavor. “Operation Lone Star has apprehended more than 200,000 illegal immigrants,” the governor claimed. “That includes more than 9,000 felony charges and more than 11,000 criminal arrests.”

Abbott has pitched himself as a tough-on-immigration politician, one who’s more committed to border security than the federal government is. He recently blamed President Joe Biden for the demise of dozens of migrants discovered in an abandoned tractor-trailer in San Antonio.

Using the “invasion” rhetoric is problematic for how people of color, particularly Latinos, will be treated in border areas, said Heidi Beirich, co-founder of the Global Project Against Hate and Extremism.

“You’re describing migrants as an enemy of the state, and that’s a little scary,” she said. “You’re essentially demonizing a whole population.”

This type of rhetoric could potentially lead to more hate crimes and violence against that population, she added. It's another way that conservatives are promoting anti-immigrant sentiments, something that’s even scarier considering the involvement of sheriffs and other public officials.

Beirich also fears that it could further agitate unauthorized paramilitary bodies patrolling the border. Officials are essentially feeding them rhetoric that could make them feel more justified in their anti-immigrant actions.

The right’s increasing demonization of immigrant groups is a “tragedy,” Beirich said. She thinks of how, back in the '80s, then-President Ronald Reagan granted amnesty to around three million people living here without legal authorization, allowing them to obtain legal status.

“The conservatives and the GOP have just become so horrifically anti-immigrant that they don’t sound any different than [former Ku Klux Klan leader] David Duke sounds,” she added. “And I mean that literally.”

Immigration policy is a federal matter, so local entities should focus on issues like crime prevention and public safety, Olivares said.

More broadly, he argued that there should be an orderly way to come to the United States. A worker shortage is already hurting the country’s economy, yet people continue to get turned away at the border, he said. The economic aspect is just one of many separate issues surrounding the border.

“At the end of the day,” Olivares said, “all of these arguments, all of these stunts — like declaring an ‘invasion’ at the border — [are] distracting from engaging in the serious public policy conversations that I think ought to be happening.”


Update, 7/6/2022: Since publication, this story has been updated to clarify attribution to the Texas Civil Rights Project's Laura Peña.
KEEP THE DALLAS OBSERVER FREE... Since we started the Dallas Observer, it has been defined as the free, independent voice of Dallas, and we'd like to keep it that way. With local media under siege, it's more important than ever for us to rally support behind funding our local journalism. You can help by participating in our "I Support" program, allowing us to keep offering readers access to our incisive coverage of local news, food and culture with no paywalls.
Make a one-time donation today for as little as $1.