More Pollution Is Headed for Midlothian, the 'Cement Capital of Texas' 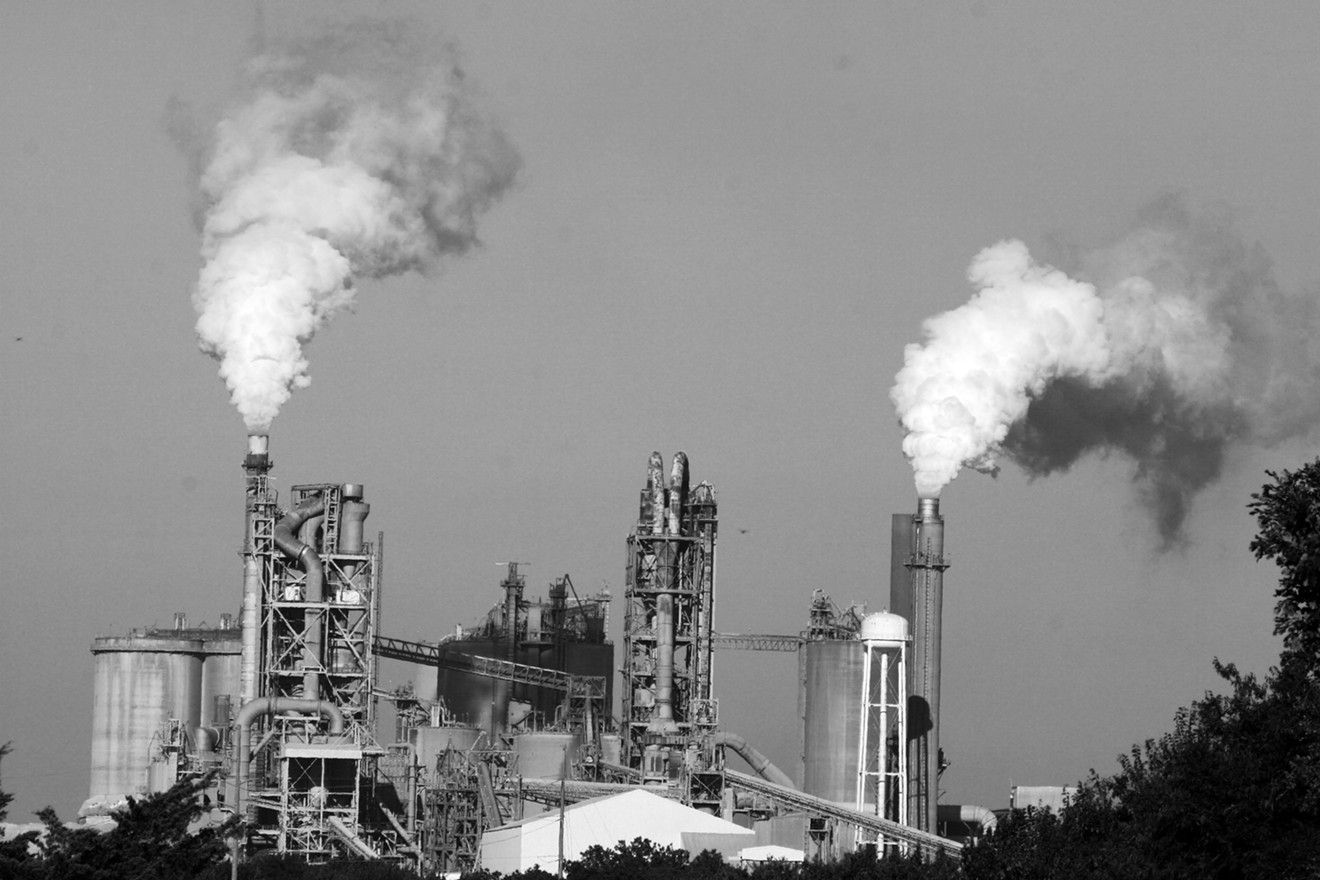 The Swiss-based company Holcim is the largest cement producer in the U.S. It’s plant in Midlothian is the No. 1 polluter in all of North Texas, pumping out 7,952 tons of total emissions in 2019. Laura Hunt
Despite 18 months of pleading with the Texas Commission on Environmental Quality (TCEQ), residents in Midlothian will have to put up with more air pollution courtesy of one of the city's biggest cement plants.

After Laura Hunt and her family moved from Oklahoma to Midlothian, a half-hour drive from Dallas, in 2015, her daughter began having breathing problems.

“She just had recurrent pneumonia. She stopped eating, stopped growing, her lung function decreased to half normal,” Hunt, a pediatrician, said. “We never could really find much in the way of a medical explanation for the source of the problems. The cement plant was always in the back of my mind.”

According to D Magazine, Midlothian produced 3 million tons of cement in 1999. TXI cement was used to build Dallas City Hall, the Meyerson Symphony Center and the J.C. Penney headquarters. A Texas Environmental Resource Consortium study found pollution that came from Ellis County, where Midlothian is located, has a significant effect on the air quality in Dallas, Tarrant, Collin and Denton counties.

Hunt lived near the Martin Marietta plant when her daughter started getting sick in October 2015. Martin Marietta, an American building materials company, bought the plant from Texas Industries (TXI) in 2015. She said they considered relocating, but because she’s a hospital-based pediatrician and needs to live in a 30-minute response time of where she works, moving was not simple.

For the next two years, her daughter’s ailments gradually got worse until 2017 when she was taken to the National Jewish Hospital.

Hunt did a lot of online research throughout her daughter’s treatment at the hospital. Through this, she found the Dallas-based Downwinders at Risk and began talking to their director Jim Schermbeck. The environmental advocacy group recently helped rid the Floral Farms neighborhood of Shingle Mountain. Schermbeck tried to inspire her to speak out about her worries regarding the cement plants. She didn’t feel ready for that.

By 2019, Hunt’s daughter was feeling better and the family was getting ready to move into a new home in Midlothian.

They moved to a house near the Holcim cement facility. The Swiss-based company Holcim is the largest cement producer in the U.S. It’s plant in Midlothian has been described as the No. 1 polluter in all of North Texas, pumping out 7,952 tons of total emissions in 2019.

The week they closed on the house in June 2019, Holcim requested a permit to get the legal amount of carbon monoxide it could emit every year increased. Instead of only being able to release 4,300 tons of carbon monoxide, the maximum amount legally allowed, Holcim wanted to emit 7,100 tons. They also want to be able to burn more petroleum coke, a solid, carbon-based material that looks like coal and can create particulate matter pollution, which can cause serious heart and lung issues. The permit was originally obtained and reported on by the Fort Worth Star Telegram.

She reached back out to Schermbeck, who sent her a copy of the permit. “It was clear they just want to increase pollution,” Hunt said. “There’s no offsets or benefits to the community whatsoever.” The company cited operational difficulties and the ability to stay competitive as reasons for the permit request.

Schermbeck introduced Hunt to fellow Midlothian resident Abigail Slye, who also approached him with similar fears about the cement plants.

The two of them live about a mile apart. They met in August 2019 with several others who have been active in combating some of the cement plants. Together, they decided to form their own group, Midlothian Breathe.

Trying to contest the permit was a complicated process. They first had to request a public meeting for further discussion with TCEQ. They requested that Holcim do test burns before the permit was approved, opposed to after.

They ended up getting about 450 public comments in total and the meeting was granted. But COVID-19 delayed their meeting. They finally had a virtual public meeting in August. In the meantime, they hired a consultant.

Ron Sahu, a mechanical engineer and environmental consultant, was hired to help evaluate the permit in detail and refine the arguments made in their public comments. They spent thousands of dollars to hire him. They initially approached their City Council to pay for the consultant, but it refused.


Midlothian Breathe didn’t think they’d be able to get the permit denied but hoped to get more safeguards put in place.

"I did what I could to protect my one daughter who seems particularly at risk, as well as the rest of my family and the community. We can be proud of that.” – Laura Hunt, Midlothian Breathe

Then, TCEQ had to respond to each of the public comments. They hoped through this TCEQ would be willing to add to the permit request, but the agency discounted their consultant and their comments. “In the TCEQ’s eyes, he’s just some quack we found off the street,” Hunt said.

The permit was approved in draft form. They tried requesting a contested case hearing. “That’s when you’re basically saying formally, ‘I contest this permit and I want to duke it out in a court proceeding,’” Hunt explained. It’s one of the big ways that Downwinders has been successful in similar past cases.

Midlothian Breathe requested the hearing as a group. Hunt also filed individually on behalf of her family and daughter. About 30 other people filed individual requests, but they were all denied.

Their 18-month effort ended with a 1-minute discussion by TCEQ denying their hearing requests. The permit will be completed in the next couple of months. Midlothian Breathe posted a video of the discussion on their Facebook page.

Holcim can increase carbon monoxide emissions by about 40-50% and start burning 100% petroleum coke as their flexible fuel, which could triple the amount of particulate matter and add heavy metals into the air, Hunt said. TCEQ approved it on the basis that even if their particulate matter is tripled, the facility will still be within the Environmental Protection Agency’s max threshold.

They denied the hearing request because they said no one lives close enough to the plant to prove they’re at higher risk of adverse effects than the general population. They all live about 1.5-2 miles from the facility. But TCEQ said they should live within a mile of the property.

Hunt said the decision is disappointing, but she’s not surprised. She and the others were told not to expect to have much of an impact.

“At least I can say now I did absolutely everything in my power to stop this or make this more protective," Hunt said. "I did what I could to protect my one daughter who seems particularly at risk, as well as the rest of my family and the community. We can be proud of that.”

Schermbeck said, "Since this GOP version of the TCEQ is devoted entirely to allowing industrial polluters to do as they please, Downwinders is not surprised by today's actions by the agency.

"What people who haven't been paying attention should realize is that TCEQ denied a hearing in the Holcim matter today to the very same residents TCEQ has been granting 'standing' to in previous Holcim hearings since the last century. Republican opposition to simple participation in the everyday processes of a working democracy are not confined to the ballot box."

In an emailed statement, a spokesperson for Holcim said: "We are pleased that the TCEQ Commissioners have voted to approve our permit application for our Midlothian facility. Our team has worked diligently to develop an application that meets federal and Texas air quality standards as we support the construction of critical infrastructure for communities, as well as home and commercial construction that promotes local and regional economic growth."

Additionally, the spokesperson said the company has been a part of the Midlothian community for almost four decades, insisting that it's committed to protecting the health and safety of its employees and local residents.

Although Hunt and the others didn’t get what they wanted, she said it's a big accomplishment that they have the infrastructure to fight something like this more efficiently in the future. Right now, they’re trying to get more information by installing more air monitors to "let the data speak for itself."

Hunt said she’s still happy they were able to make the permit approval such a pain in the neck for Holcim. If they hadn’t focused so strongly on it, they wouldn’t have been able to delay the permit for as long as they did.

“I think we still sent a strong message to Holcim,” Hunt said. That message? “We’re paying attention. We’re not going to make this easy for you.”
KEEP THE DALLAS OBSERVER FREE... Since we started the Dallas Observer, it has been defined as the free, independent voice of Dallas, and we'd like to keep it that way. With local media under siege, it's more important than ever for us to rally support behind funding our local journalism. You can help by participating in our "I Support" program, allowing us to keep offering readers access to our incisive coverage of local news, food and culture with no paywalls.
Make a one-time donation today for as little as $1.