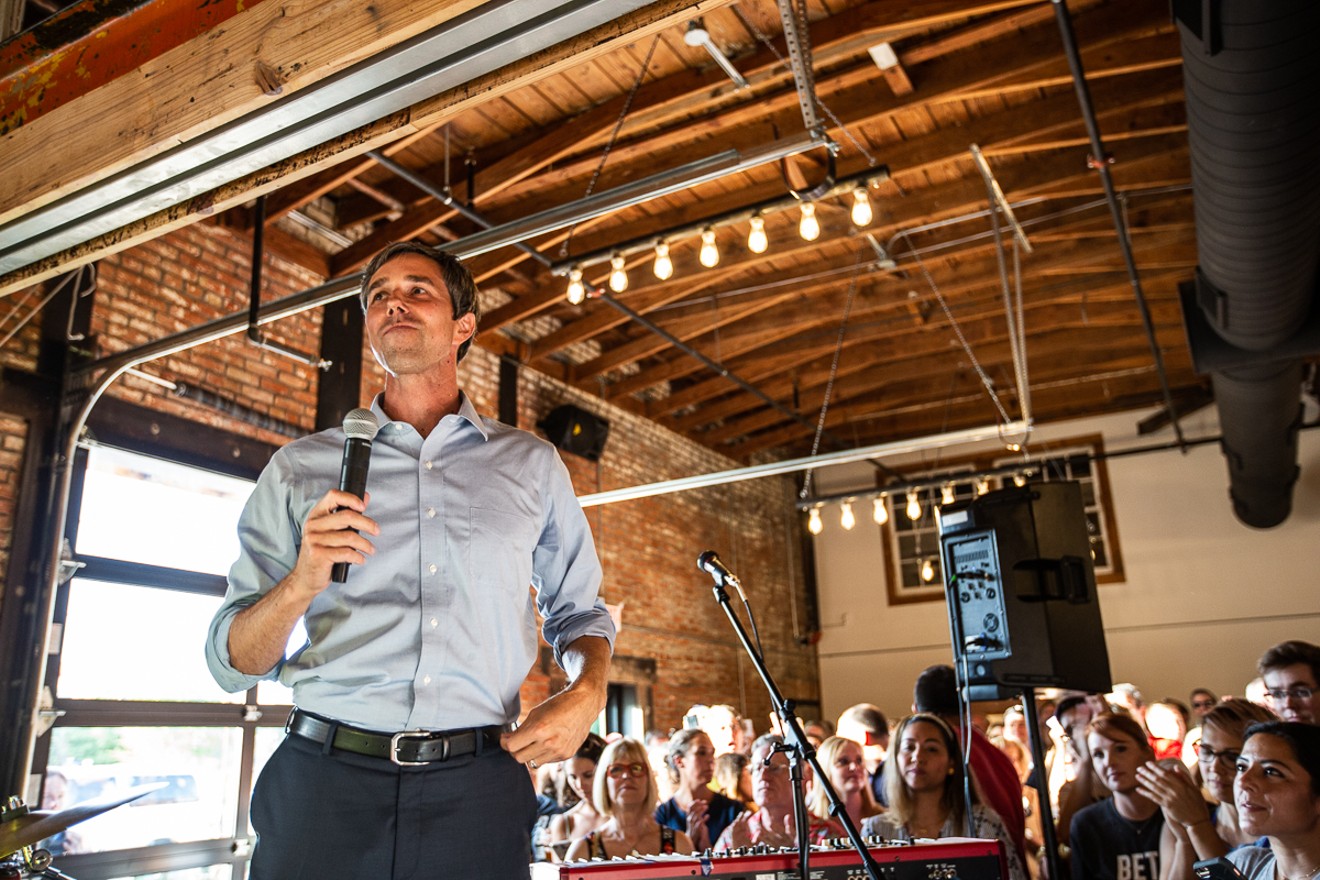 Beto O'Rourke. Sexy and he knows it. Melissa Hennings
The GOP has a problem attracting women voters, at least among those women who think uninvited pussy grabbing is a bad thing. And they have a problem with younger voters, a depressingly small group but one that nonetheless tends to be passionate about things like civil liberties, the environment and keeping the nation's vulvae safe from the grasping tiny hands of large orange men.

Yep, it could be a tough row to hoe for the GOP, but luckily for them, Texas Republicans have a cunning plan: Tell voters that Beto O'Rourke, the man looking to unseat Sen. Ted Cruz, was once a smokin' hot bass player in a punk band. And include pictures.

Psst ... hey, Texas GOP, haven't you heard? Rock and roll is here to stay. You should know that, since Danny & the Juniors released that song in 1958, which is about where the hearts, minds and policies of the Republican Party still dwell — at least among the more enlightened party members, that vanishing breed.

Not up on your social media? Let us 'splain.

Here's the setup. Throughout his campaign against Cruz, O'Rourke has pushed the senator for multiple debates. Last month, Cruz agreed, sorta, to five debates but insisted on the time, location and topics of each of the showdowns. O'Rourke balked, specifically at the Cruz team's requirement that each of the debates be held on a Friday night and limited to one topic of Cruz's choosing.

Hah, like a punk rocker is going to be tied by rules from the man. In the words of Sid Vicious, any self-respecting punk like O'Rourke will sing out, "Uhdiditmwahwaaaay."

Anyhow, the sides have yet to come to an agreement — although both Cruz and O'Rourke have said in recent days that their camps are getting closer to reaching a deal — but the Texas GOP decided this week that it was going to go after O'Rourke anyway, once it became clear that the first Cruz-proposed debate, which would've been Friday night, wasn't going to happen.

Which is fine, not exactly in good faith, but fine by the standards of political campaigns. Boy, did they screw it up, though. Instead of making O'Rourke look chicken, Texas Republicans made the already Kennedy-esque O'Rourke look even sexier in a series of tweets. The message, apparently, was that O'Rourke is just too cool for Texas voters.

That's right Texas voters, while Cruz made enemies for life during his undergrad years at Princeton, O'Rourke played bass in a band with At the Drive-In frontman Cedric Bixler-Zavala. While they never made it big, Foss were a bit of a thing in the early '90s, as demonstrated by a couple of raucous performances on a local TV show in El Paso. O'Rourke's in red. (Warning to elderly Republicans: play this with the sound muted. We don't want to kill anyone's grandma.)

OK, so we're not saying the music was good. But for reference, below is a clip of what Republicans look like when they play guitar. We believe the man on the left is Ron Wood. The guy on the right making the embarrassing bass face is late GOP dirty trickster Lee Atwater.
The Texas GOP also tweeted O'Rourke's mugshot from a 1998 DWI arrest, which might have been a good idea had O'Rourke not already addressed the two arrests on his record — university police picked him up after he crawled under a fence on the University of Texas-El Paso campus in 1995 — repeatedly.


There's always the chance that Robert “Beto” O’Rourke won’t debate Senator Cruz because he got into a hazy situation... pic.twitter.com/4nmd42AEkl

The Texas GOP's tweets, as anyone who knows anything about Twitter would've guessed, backfired brutally. Many, including vox.com's Matt Yglesias, questioned Texas Republicans' decision to contrast O'Rourke with their candidate.

Is the theory of this tweet that the cool guy in a band typically loses a popularity contest to an unpleasant debate nerd? https://t.co/7AX1AK6ypk

here’s what ted cruz and beto o’rourke were doing to unwind during roughly the same period pic.twitter.com/yxsXGaaF0y

This is so good. Beto was in a band while Ted Cruz was busy being a friendless ambition monster practicing his inaugural address in the Princeton dorm mirror. https://t.co/tdQjz5gJ64

Keep pointing out that Beto is cooler than you though. Good plan. pic.twitter.com/eEuBZ1zP5b

Why is the GOP trying to make me have a crush on Beto https://t.co/WLYnx7zYpi

Not sure posting photos of Beto O'Rourke looking super hot in the '90s is the best strategy, but I'm gonna assume the Texas GOP know what they're doing.

why'd they tweet this photo of beto looking hot as fuck https://t.co/bX4rJIknpj

Ernie Luckman showed everyone, again, that The Simpsons have already predicted everything.

The best tweet of the bunch, however, and there was an avalanche of them, was an inside joke from journalist Jules Suzdaltsev.

me finding out Beto was in a band pic.twitter.com/BZ00s8gFRM

Keep up the good work Texas GOP. O'Rourke needs every vote he can get.
KEEP THE DALLAS OBSERVER FREE... Since we started the Dallas Observer, it has been defined as the free, independent voice of Dallas, and we'd like to keep it that way. With local media under siege, it's more important than ever for us to rally support behind funding our local journalism. You can help by participating in our "I Support" program, allowing us to keep offering readers access to our incisive coverage of local news, food and culture with no paywalls.
Make a one-time donation today for as little as $1.