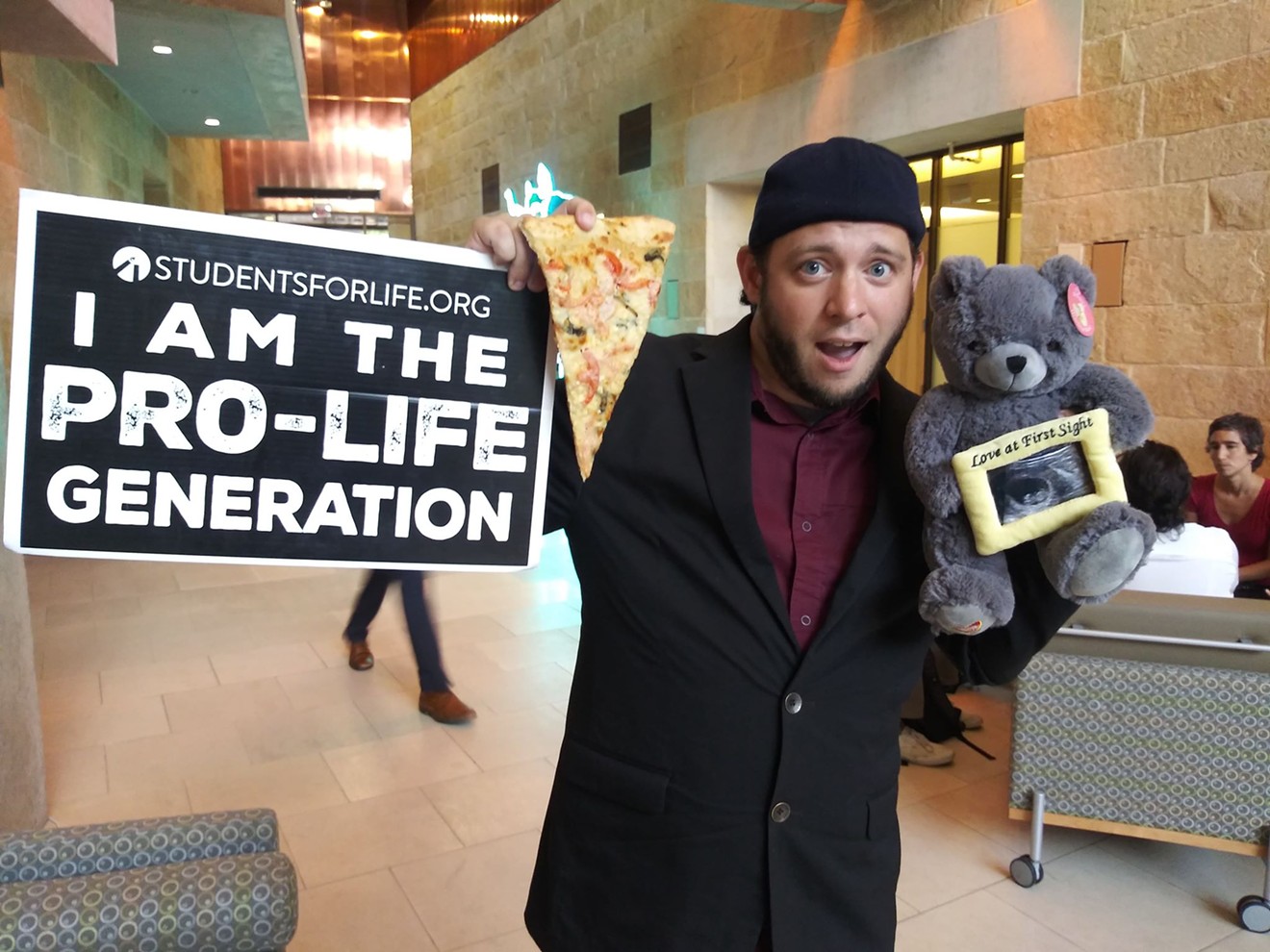 Mark Lee Dickson, in Austin during the 2019 legislative session, faces lawsuits from a trio of abortion-rights groups accusing him of defamation. Alex Carter
A year ago last Thursday, the town of Waskom in deep East Texas declared itself a sanctuary city from abortion. The move was as notable for its novelty as its glaring unconstitutionality, but it started a movement. At the urging of East Texas Right to Life director and provocateur Mark Lee Dickson, small cities and towns across the state have followed suit over the last 12 months.

In places like Rusk and Big Spring, city councils have taken up and approved ordinances banning abortions within their city limits, based on the idea that the Supreme Court decisions guaranteeing women's right to have abortions were all wrongly decided. The resolutions also declared a cluster of abortion-rights groups criminal organizations.

The American Civil Liberties Union of Texas sued several of the cities and counties that passed the ordinances earlier this year but withdrew the suits after the municipalities agreed to drop several provisions from their ordinances, including the bit about the abortion-rights groups being criminal organizations.

Late last week, three of the groups — The Afiya Center, The Lilith Fund and the Texas Equal Access Fund — sued Dickson and East Texas Right to Life for making the claim in the first place. Asserting they'd committed crimes when they'd done no such thing, the groups say, was defamation.

"There is no level of commitment to a particular political outcome and no amount of fervent belief in any one particular political position that relieves a person of his duty to avoid defaming others. Simply put, there are rules that apply to everyone in Texas and one of them is you cannot falsely accuse your political enemies of crimes," the version of the suit filed by the Texas Equal Access Fund in Dallas County reads. "Defendants Mark Lee Dickson ('Dickson') and Right to Life East Texas ('RLET') have been breaking that rule with impunity for months by lying about Plaintiff Texas Equal Access Fund ('TEA Fund' or 'Plaintiff') and other pro-choice organizations. Defendants’ lies about the TEA Fund and the other organizations are as simple as they are appalling. They have repeatedly stated that TEA Fund and the other organizations are literal criminals when Defendants know that is not true."


Marsha Jones, the executive director of The Afiya Center, a Dallas nonprofit focused on improving and providing access to reproductive healthcare for black women and girls, said that Dickson's crusade has threatened its existence.

"The women and folk that we serve have already been marginalized and disenfranchised, and we are saying enough already," Jones wrote in a statement. "Texans seeking abortions deserve compassion and care, not reproductive oppression. To be labeled as a 'criminal entity' presents a clear and present danger to the life of this organization.”

Dickson views getting sued as a win for his cause.

"The lawsuit they are bringing should be a great case to bring before the courts and a great victory in the fight for life. The statements which I have made are rooted not in my own imagination, but in the law written on all of our hearts, in the Constitution of the United States of America, in the Texas Constitution, and in the laws of the great State of Texas," he said in a statement Thursday.

While Dickson's ordinances have been the subject of two lawsuits and significant consternation among both abortion-rights and anti-abortion activists, they still don't actually do anything.

The ordinances are simply meant to confuse and intimidate those who might seek abortion care, according to the groups suing Dickson.

"Dickson wants people to genuinely believe that providing abortion services, or assisting others to do so, is presently a crime, and that present abortions or assistance therewith — undertaken while Roe is still the governing law — will be subject to future penalties if the Supreme Court’s view of the constitution changes. Dickson and RLET know that abortion is legal, that advocacy for abortion rights is legal, that assisting people in obtaining legal abortions is legal, and yet Dickson is genuinely trying to persuade people that organizations like TEA Fund are currently violating the law by providing assistance to people who are seeking abortion services. This is defamation."


Despite Dickson's efforts, the groups suing him say they are undeterred and will continue to support access to healthcare for women across North Texas.

"Our callers rely on us to provide them with accurate information and help them get the abortion they need, and we’re dedicated to helping all of them, whether they live in Waskom, Dallas, or any part of North Texas," Kamyon Conner, the executive director of the Texas Equal Access Fund, said in a statement. "We take pride in the work that we do to expand abortion access in Texas and denounce those attempting to say that this tireless work is criminal. Texans depend on us and with this lawsuit, we’re fighting back and holding anti-abortion extremists accountable for their dangerous lies.”
KEEP THE DALLAS OBSERVER FREE... Since we started the Dallas Observer, it has been defined as the free, independent voice of Dallas, and we'd like to keep it that way. With local media under siege, it's more important than ever for us to rally support behind funding our local journalism. You can help by participating in our "I Support" program, allowing us to keep offering readers access to our incisive coverage of local news, food and culture with no paywalls.
Make a one-time donation today for as little as $1.