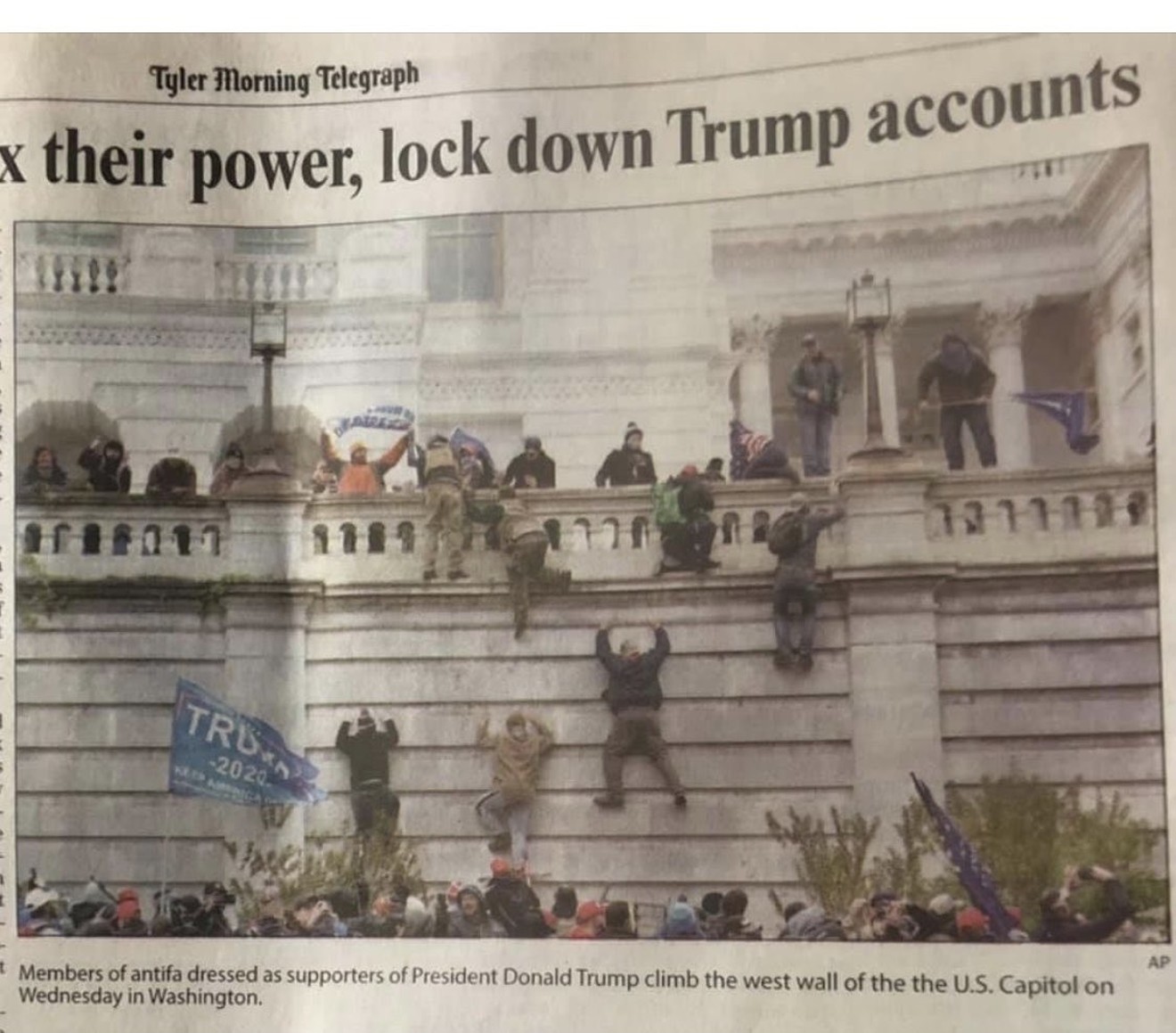 The caption on Page 8A of the newspaper’s Friday edition said insurrectionists scaling the Capitol’s west wall as Congress met to accept the election of Joe Biden were “members of antifa dressed as supporters of President Donald Trump.” The false claim that members of the loose coalition of anti-facists known as antifa provoked  Wednesday’s assault on Congress spread early among conservative commentators before being quickly debunked by the FBI last week.

By Friday afternoon, social media platforms lit up with images of the page along with comments that the newspaper was peddling right-wing propaganda. After a flurry of tweets and Facebook posts demanding answers and accountability, John Anderson, East Texas regional editor for the Longview News-Journal and Tyler Morning Telegraph, tweeted: “It was not done by editorial staff. That is not the correct cutline and we are addressing it.”

On the newspaper’s “TylerPaper” Facebook page, long-time subscribers, former employees and outraged social media users from across the country complained about the falsehood getting past the newspaper’s editors.

“That’s really bad,” Tyler resident Jim Noble commented. He wanted to see more done after reading TylerPaper’s post announcing the correction. “I’ve been a subscriber for 20 years. I don’t want to tell you how to do your business, but that deserves a response that reflects your commitment to accurate and unbiased journalism,” Noble wrote.

By the end of the weekend, the Facebook announcement that the paper was aware of the “incorrect cutline” had 566 comments and 47 shares. From locals, there was a sense of frustration, disappointment and some anger, but out-of-towners called for everything from a copy editor’s firing to the editor in chief’s resignation to closing the newspaper.

“Social media, stuff lives on forever there,” said Stephen McHaney, president of the company that owns the Telegraph, M. Roberts Media, and publisher of the Longview News-Journal. By 6 p.m. Saturday, McHaney said he had spent about 30 hours fielding phone calls, texts and emails about the cutline. Calls rang in from New York to California and all across Texas. “As soon as I was aware of the mistake, I knew this was going to blow up and get a lot of response,” he said.

“Some people say, ‘Oh, you know, this just proves that you're fake news,’ And I 100% believe that … this proves that we're not fake news because the fundamental difference in my mind between fake news and real news is if you're real news, you admit to your mistakes and you correct them,” McHaney said.

But readers and commenters online had the same question: Who is to blame?

"The fundamental difference in my mind between fake news and real news is if you're real news, you admit to your mistakes and you correct them.” – Stephen McHaney, M. Roberts Media LLC's president

“There's a perception that there are hundreds of people reviewing every article,” McHaney said. “And that's just not the case.”

At many publications, copy editors are the last line of defense against mistakes as they give stories a final polish and, in many cases, write captions and proof pages before they go to press. That line has grown perilously thin in recent years as newspapers shed jobs, outsource copy editing and slash pay for those copy editors who remain, thanks to changing reader habits and competition in advertising from social media behemoths cutting into newspapers' profits.

When asked to clarify Anderson’s tweet about the cutline not being from “editorial staff,” McHaney said: “It was definitely somebody on staff. I think his comment was that it happened in production, which is, frankly, it's a difference without a difference. It happened on the copy desk, instead of in the writing and editing portion. So, for the general public, yeah, it happened. That's part of editorial, I mean, it's part of the company.”

The Tyler Morning Telegraph was family-owned and operated for 108 years before being acquired by M. Roberts Media in 2018. A media and “marketing solutions company” that also owns the Victoria Advocate, Longview News-Journal, Panola Watchman, Marshall News Messenger and Kilgore News Herald, the company  also offers “commercial printing and distribution services.”


A real caption that someone edited in my former newspaper today. This is deeply shameful. Someone intentionally edited an @ap caption to this in Gohmert’s hometown newspaper.

“My standpoint is, I personally take responsibility for it,” McHaney said. “Every mistake that happens in this company, ultimately, I'm responsible for it. And so, you know, when it’s all said and done, that is the case. I take responsibility for the error. The only reason it comes into a discussion of ‘How did it happen?’ – and there's this one person – is because people go ‘All right, well, then how did that happen?’ And then you have to start getting into the whole process of how does the newsroom work?”

An editorial written by McHaney and published Sunday apologized for the mistake.

“OUR VIEW: We made a mistake. We are sorry,” McHaney wrote. “I can assure you that there is no one more concerned about this error than us. We have already started investigating how this happened and we will review our processes to ensure that it does not happen again. Our current process clearly failed, and it needs to be changed. The main point about the process that we want you to know is that this was not a reviewed and approved caption. It was a breakdown in our process. We will strive to do better because this is not acceptable.”

“As a former copy editor at the TMT and other papers, things like this aren’t ‘mistakes,’ ‘accidents’ or ‘errors,’ reader Nathan Wright tweeted in response. “I know how the process works. Someone went in and changed the [AP’s] cutline. Then it was approved by one or two others who got a look at it. This editorial is garbage.”

Many on Twitter, some other photojournalists, tagged the AP in tweets of the photo with some hoping the AP would investigate and others calling for the AP to revoke the paper’s ability to run their content.

“AP has a general rule against changing the editorial meaning of AP content,” Patrick Maks, media relations manager for The Associated Press, wrote in an email late Saturday. “We are proud of the factual journalism that we deliver to our customers and we have addressed the issue with our member.”

“We've got a process that obviously broke down, it failed in this,” McHaney said in a phone interview. “And so we will, we will review that, to make sure that it doesn't happen again.” He declined to name who he thought was responsible for the caption. “This is not a public figure,” he said. “This is not a manager. I don't think it's appropriate to talk about that individual.”

The false cutline can hardly be dismissed as a typo, but it wasn’t necessarily meant to be published. It’s possible someone placed the caption as a joke to share with coworkers without intending it to make the final proof of the page, though McHaney wouldn’t say. (Editor’s note: Similar things have happened at other newspapers.)

“I will say, I do not believe it was malicious," McHaney said.

“I would just, you know, I would encourage you to look at this through the lens of a young person on copy desk who's perhaps not as experienced. … There's an old, old saying that I've tried to teach reporters and editors forever is that ‘No matter what you're doing, whether it's a joke or not, don't put anything in the system that you don't want to end up in the paper, because it just might end up in the paper.’” (Editor’s note: Amen.)
KEEP THE DALLAS OBSERVER FREE... Since we started the Dallas Observer, it has been defined as the free, independent voice of Dallas, and we'd like to keep it that way. With local media under siege, it's more important than ever for us to rally support behind funding our local journalism. You can help by participating in our "I Support" program, allowing us to keep offering readers access to our incisive coverage of local news, food and culture with no paywalls.
Make a one-time donation today for as little as $1.
Daniel Rodrigue
Contact: Daniel Rodrigue