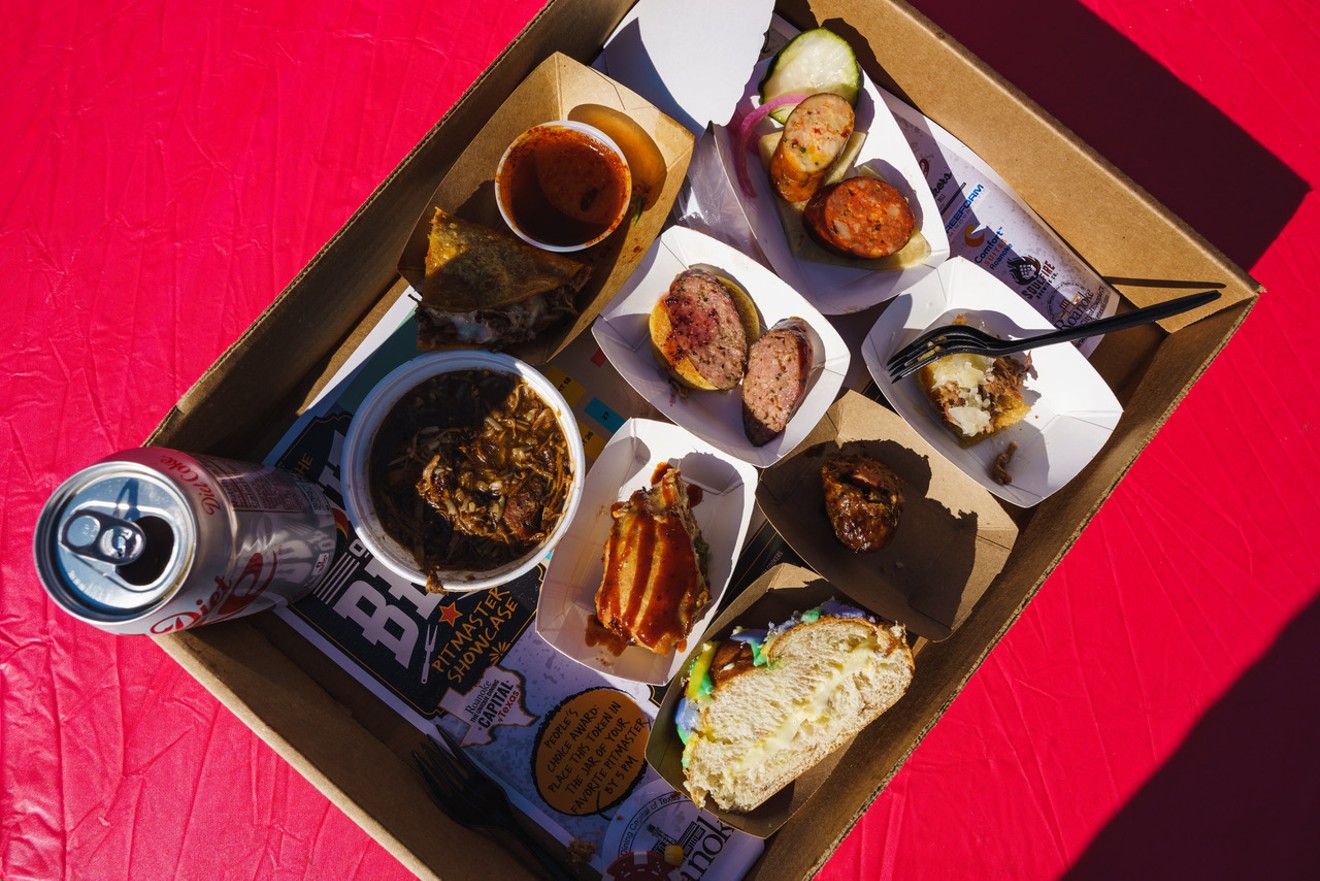 A tray of food this past weekend at For the Love of BBQ Pitmaster Showcase in Roanoke. Sean Welch
The day started with snow flurries and finished with 1,000-gallon smokers, barbecue and live music.

For the Love of BBQ Pitmaster Showcase brought out some amazing flavors from around DFW, Texas and Louisiana. The collaboration of minds from festival founder Brendan Lamb and the city of Roanoke managed to make year two better than the first. The layout and entry were more welcoming and better coordinated for a speedier entrance.

Upon entry, attendees had the option of free gourmet coffee or a beer sample from Soulfire Brewing in Roanoke. The pitmasters and vendors were intertwined but broken up into two areas, which helped minimize congestion.

Spit fire set up by AJs Custom Cookers and Big Javs BBQ.
Sean Welch
Big Javs BBQ teamed up with AJ’s Custom Cookers for an elaborate live-fire spit where they roasted a suckling pig and goat. This showcase set the tone for the day.

As we moved from station to station, trying each sample, the food continued to impress, but it wasn’t the only attraction. Texas Made Supply Co. had a putting green, and there was an ax-throwing trailer on site, as well as a rotation of live music acts on the main stage.

If you needed a break from the cold, a cocktail or a chance to rest your legs you could head inside to the Chop Shop and redeem your drink ticket for a cold beer or a soda. There was a bar and a large seating area, which was a welcome addition from last year's setup.

What’s the best about these food festivals? The creativity. From Weatherford down to New Orleans, these pitmasters brought some of their most exciting dishes yet.

Anterledshed BBQ won people’s choice with their brisket elotes. Hurtado Barbecue’s served duck barbacoa tacos on blue corn tortillas. Rossler’s Blue Cord Barbecue had a “porkstrami” on sourdough with mustard and sauerkraut. Smoke & Biscuit brought back childhood memories with a smoked bologna sandwich topped with queso. Gonzo’s Smokehouse of Luling, Louisiana, showed off their burnt end boudin sausage and Trevino’s stole our hearts with their pork belly burnt end sopapilla topped with Wicker’s Jalapeño Jelly. While Antlershed won the people’s choice, we made a list of our own:

Trevino’s pork belly burnt end sopapilla was otherworldly. The sweet jelly and sopapilla complemented the heat from the jalapeño and the succulence of the pork belly. It was hard to think about another bite other than this one all day, but we managed.

The Monterrey chicken sausage from Weatherford’s TND Barbecue was more than just a beautiful display of colors. Chicken and sausage aren’t always found in the same sentence but in this case, we wouldn’t want it any other way. If the chicken wasn’t our favorite, their Monterrey Jack sausage was a close second.

The burnt-end boudin sausage from Gonzo’s Smokehouse made us want to get into our cars on Monday and head to Louisiana. During the month of February, there are plenty of reasons to head to New Orleans, but their boudin and King Cake are worth the trip alone.

Typically, when you think of pastrami, you think of beef, rye and a deli.  Rossler’s Blue Cord Barbecue had a pork rendition of pastrami on top of a slice of sourdough slathered whole grain mustard topped with a nest of sauerkraut. Everything about this bite was right.
click to enlarge

Porkstrami from Rossler's Blue Cord Barbecue
Sean Welch
We just can't wait until next year.
KEEP THE DALLAS OBSERVER FREE... Since we started the Dallas Observer, it has been defined as the free, independent voice of Dallas, and we'd like to keep it that way. With local media under siege, it's more important than ever for us to rally support behind funding our local journalism. You can help by participating in our "I Support" program, allowing us to keep offering readers access to our incisive coverage of local news, food and culture with no paywalls.
Make a one-time donation today for as little as $1.