After 32 Years, Avila's Has a Comfortable Lead as One of the Best Tex-Mex Restaurants The chile relleno, stuffed with brisket, is one of the best Tex-Mex dishes in the city ($12.95). Nick Rallo
Before Anita and Octavio Avila opened their restaurant, there was the bungalow at 4714 Maple Ave. The front of the house was devoted to Anita’s beauty shop, which she ran until 1982. On Sunday mornings, three blocks away from the storefront, granddaughter Katherine Avila and the rest of the family would gather for breakfast. Grandma’s cooking is forever the restaurant before the restaurant. A few days before Christmas in 1985, Anita and Octavio Avila opened their doors for the public, and the menu built around those Sunday recipes.

Thirty-two years later, Avila's has a cruising lead as one of the best Tex-Mex restaurants in the city. It's as polished as ever, and the food feels free of the anchors of trends or chef-driven concepts. The best Tex-Mex restaurants blow past the stereotype of hangover-cure food or drunk food. The best ones serve food that, when it arrives, has the transportive effect of placing you in front of a buffet of family-style eating on a random Sunday.

In Avila’s restaurant-house, a Texas icon shows up at my table: the plastic salsa carafe, decanting a flame-red, homemade blend of jalapeños and tomatoes that thrums my head with heat. The salsa is a roaring fire. Nearby, an Avila’s newcomer chomps through his bowl of chips and hot sauce, too.

“So far, so good,” the man says out of nowhere.

The chile relleno, a forest-green poblano stuffed with tumbles of tender, rich-with-its-own-juices brisket, enveloped in a tomato sauce and a comforter of cheese, arrives with less fanfare than it deserves. The tomato sauce over the pepper is light and bright, better than most Italian spots' marinara. 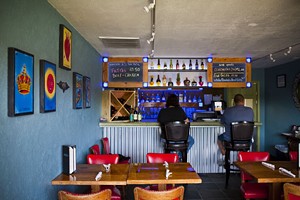 Nick Rallo
“Gosh, low and slow,” Katharine Avila says when asked about how the brisket is cooked. It bathes in a 200-degree bath of onions, pepper, salt, garlic and red wine for around six hours. It's dropped in tacos, Avila’s most popular order for more than a few years.

When Avila’s opened in the mid-'80s, it was a family-run gig. Grandma Anita cooked, of course. Katherine’s aunt joined in, and Octavio Sr. washed dishes. Katharine’s father and brother ran the front of the house.

The first menu items were the combination plates, named Papito, Anna Maria, Ricky and Patricia after her aunts and uncles. The mole and the chile relleno are true-blue specialties. Chickens are boiled and pulled apart for enchiladas, astonishingly good in a city where the dish is often presented with bone-dry protein under a stagnant river of cheese sauce.


“People always ask us: Is your mole out of a jar? ... Sometimes I’m offended. It’s so much labor and so much time." — Katherine Avila

“We don’t use any kind of helpers. Like, the sour cream does not have any kind of powdery mix in it,” Katherine Avila says. “A lot of restaurants use it to make it fluffy ... they use shortcuts.”

Do not ask if there’s chocolate in the mole. Avila's recipe is layers of heat and tang and smoke. It sparks with nine fresh and dried chiles.

“People always ask us: Is your mole out of a jar?” Katherine Avila says. “It depends on my mood, but sometimes I’m offended. It’s so much labor and so much time.” Pozole, served with must-use toppings of lime, diced cabbage, raw jalapeños, lime and Mexican oregano, is $5.95.
Nick Rallo
About a decade ago, the Man with Frosted Tips walked in the restaurant. Once Guy Fieri’s episode of Diners, Drive-Ins and Dives aired, Avila’s created a combo platter to meet the demand of the show, A wave of newcomers came in looking for pozole, a tamale, a brisket gordita, pico de gallo, guacamole, rice and beans. Love or hate Guy Fieri, his TV show bolsters local mom-and-pop restaurants. Every time it re-airs, Katherine Avila says, the restaurant gets a weeklong bump in customers.

Anita Avila died in January 2014. Katherine admits there was a time when the cooking drifted off the road from Anita Avila’s original dishes. Today, head chef David Quezada has focused things, if my recent visit is any indication. The pozole isn’t Flavortown (trademarked) — it’s a piping-hot, ageless and comforting stew.

Quezada has been with the family for five years. The best thing about the 32-year-old restaurant, however, is that the food tastes free of whatever time it really is.