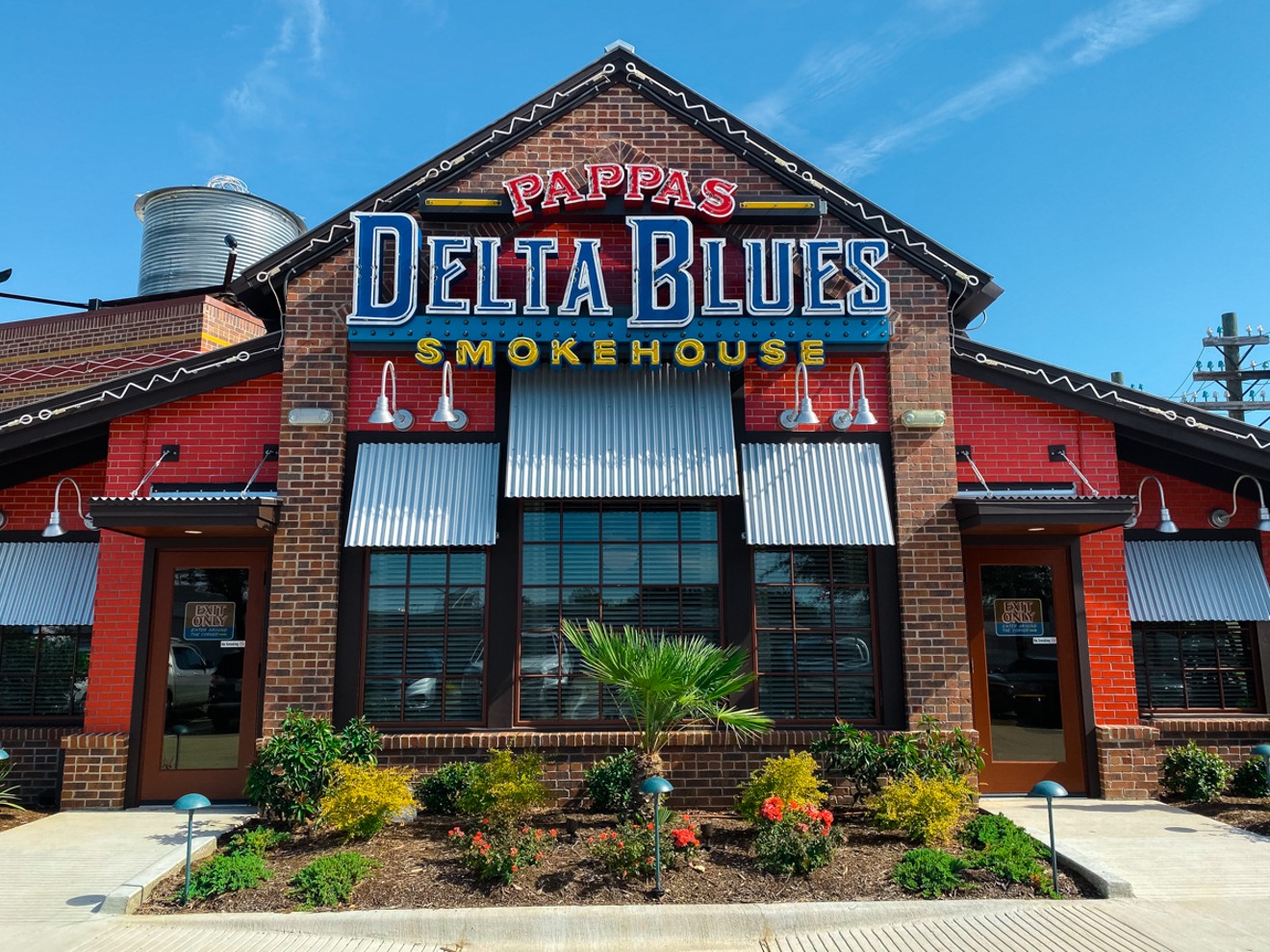 “We wanted to elevate the BBQ experience for Texans,” it reads. “No need to wait in line and eat off a plastic tray: Pappas Delta Blues Smokehouse offers the best barbecue around.”

It’s a bold claim to stake, but bold is what we do in Texas. Sure, sit-down, full-service barbecue restaurants are the exception and not the rule around here, but Local Yocal BBQ and Grill in McKinney and 18th and Vine BBQ in Dallas set a high bar, and comparisons are inevitable.

On the whole, the barbecue marks at Pappas are hit with authority, but you’re going to pay for the elevated experience. And we certainly experienced some hiccups in service along the way that aren’t the norm at other restaurants in the Pappas family. 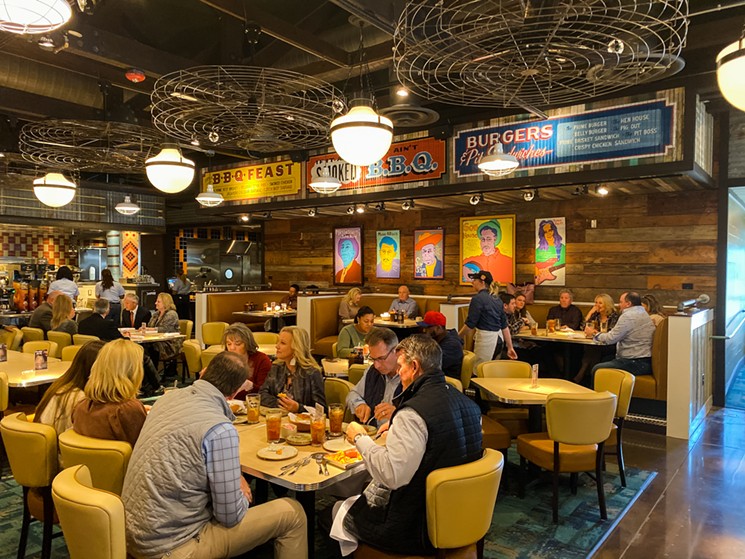 If sound came through our photos, you'd hear lots of Christmas music from this photo taken two days after Halloween. You're welcome for that technology not happening.
Chris Wolfgang
With a name like Delta Blues, you probably don’t expect Blake Shelton/Gwen Stefani Christmas covers to greet your ears on arrival. In fact, the Christmas music continued almost nonstop, despite it being the first weekend of November on our visit. We overheard a neighboring table comment negatively about the musical choices, and the Christmas-heavy music rotation tapered off shortly thereafter.

Pappas Delta Blues Smokehouse offers a substantial menu of barbecue and Southern fare. There’s also a full bar menu that's heavy with whiskey, while local breweries make up a pleasant share of the beer selections. But anyone who bristles at the current state of high barbecue prices will find their ire sufficiently raised when they see how little their dining dollars get them at Pappas Delta Blues.

We started with an appetizer of pimento cheese, served with “East Texas crackers” and, most important, some of Pappas' jalapeño-cheddar sausage ($13.95). Our tray (metal, not plastic!) arrived with a healthy scoop of pimento cheese and a full link of the sausage, although “East Texas crackers" here is just a euphemism for saltines dusted with paprika. 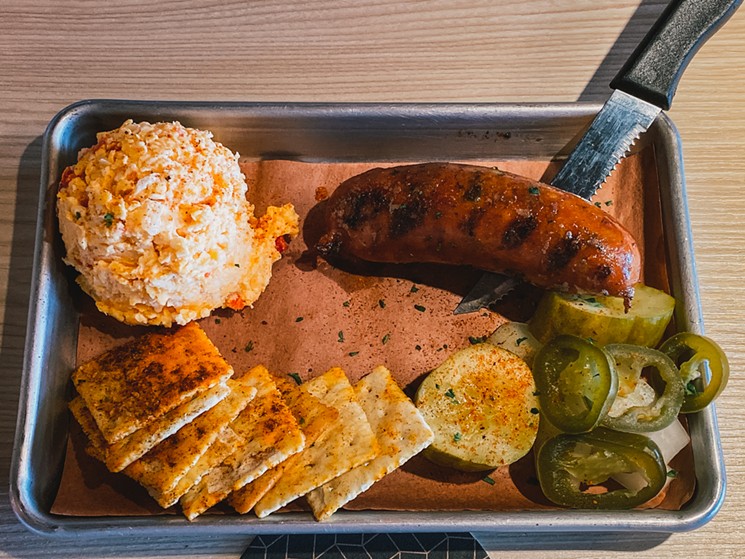 Sticker shock continues if you’re looking for traditional barbecue. During lunch hours, a two-meat combo plate of barbecue is a budget-busting $24.95. For nearly $25, you get prime brisket, your choice of another meat and two sides. In Pappas' defense, it’s a lot of food, all of it high quality; we were presented with what felt like close to a pound of meat on our plate.

We got both lean and moist slices of brisket with stellar flavor and a sticky and smoky bark that we couldn’t get enough of. Equally smoky and delicious was the ample pile of pulled pork, so juicy that it feels like a barbecue magic trick of flavor. We were a little let down by the pedestrian mac and cheese, with more crumbled saltines (sorry, “East Texas crackers”) on top, but the jalapeño creamed corn impressed. 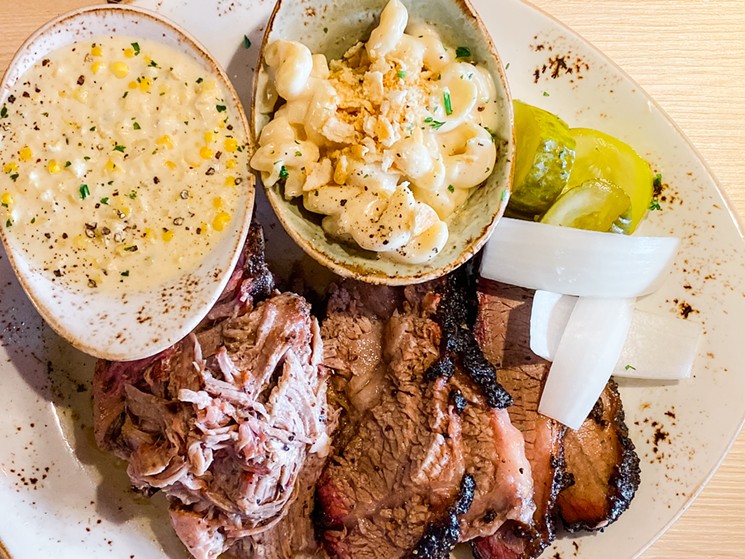 Twenty-five dollars for lunch, $30 for dinner. It's a lot of food, but the value proposition is up for debate.
Chris Wolfgang
No one wants to do a financial analysis of their lunch to determine if it’s a good value, but ordering this much food a la carte at most barbecue joints would also net you a sizable check. And while there’s no denying the copious quantity of quality food on the tray, ordering the same tray at dinner for $29.95 strikes us as much less of a bargain. There’s a cheaper taco section of barbecue meats that’s only available for weekday lunches, but most dining couples can expect at least a $50 bill with each visit.

We realize cloth napkins, real plates, a full bar and waitstaff don’t come cheap, but a similar meal at 18th and Vine runs only $18, with the same level of service. Or perhaps better service, because we encountered some bumps at Pappas Delta Blues that don’t often happen at other Pappas establishments.

The waitstaff who served us were all friendly and knowledgeable, and our waitress had thoughtful recommendations when she learned it was our first visit. But twice our iced tea glasses sat empty for inexcusable amounts of time before a waitress reappeared to ask if we wanted refills.

And despite the promise of not having to stand in line, we certainly sat around waiting like some of the area’s more popular barbecue joints. Our appetizer appeared around 20 minutes after we ordered it, but it was at least 30 minutes longer before the entrees arrived. 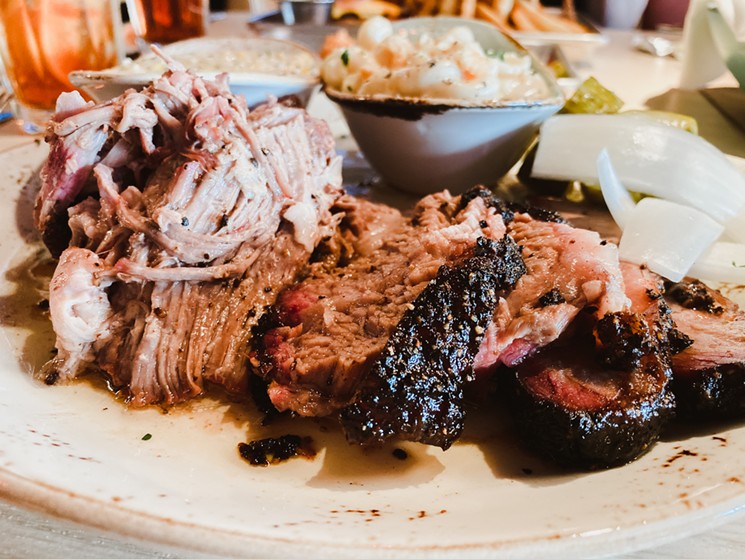 Without question, Pappas Delta Blues earns high marks for some stellar barbecued meats. But at what cost?
Chris Wolfgang
Around the time we really started to wonder where our food was, with no sign of our waitress, the manager came over unprompted to apologize for the delay and tell us she would see what she could do to get our order out. Our food arrived about five minutes later.

We left lunch full of belly but light of wallet, which leaves us wondering where Pappas Delta Blues Smokehouse fits in the Dallas-Fort Worth barbecue scene. Comparisons to places mentioned in this article earlier seem likely, but they execute the elevated barbecue theme with better accuracy. And while Pappas’ barbecue flavors are the equal of many craft spots, they lose points on the value side of the equation.

That said, Pappas Delta Blues Smokehouse was doing a swimming business on our visit. Maybe it fits in because it fills a missing spot in Plano’s ample restaurant scene and is a venture that is already paying dividends.

Pappas Delta Blues Smokehouse, 3916 Dallas Parkway, Plano. 972-378-9903. Open 11 a.m. to 10 p.m. Sunday through Thursday; 11 a.m. to 11 p.m. Friday through Saturday.
KEEP THE DALLAS OBSERVER FREE... Since we started the Dallas Observer, it has been defined as the free, independent voice of Dallas, and we'd like to keep it that way. With local media under siege, it's more important than ever for us to rally support behind funding our local journalism. You can help by participating in our "I Support" program, allowing us to keep offering readers access to our incisive coverage of local news, food and culture with no paywalls.
Make a one-time donation today for as little as $1.