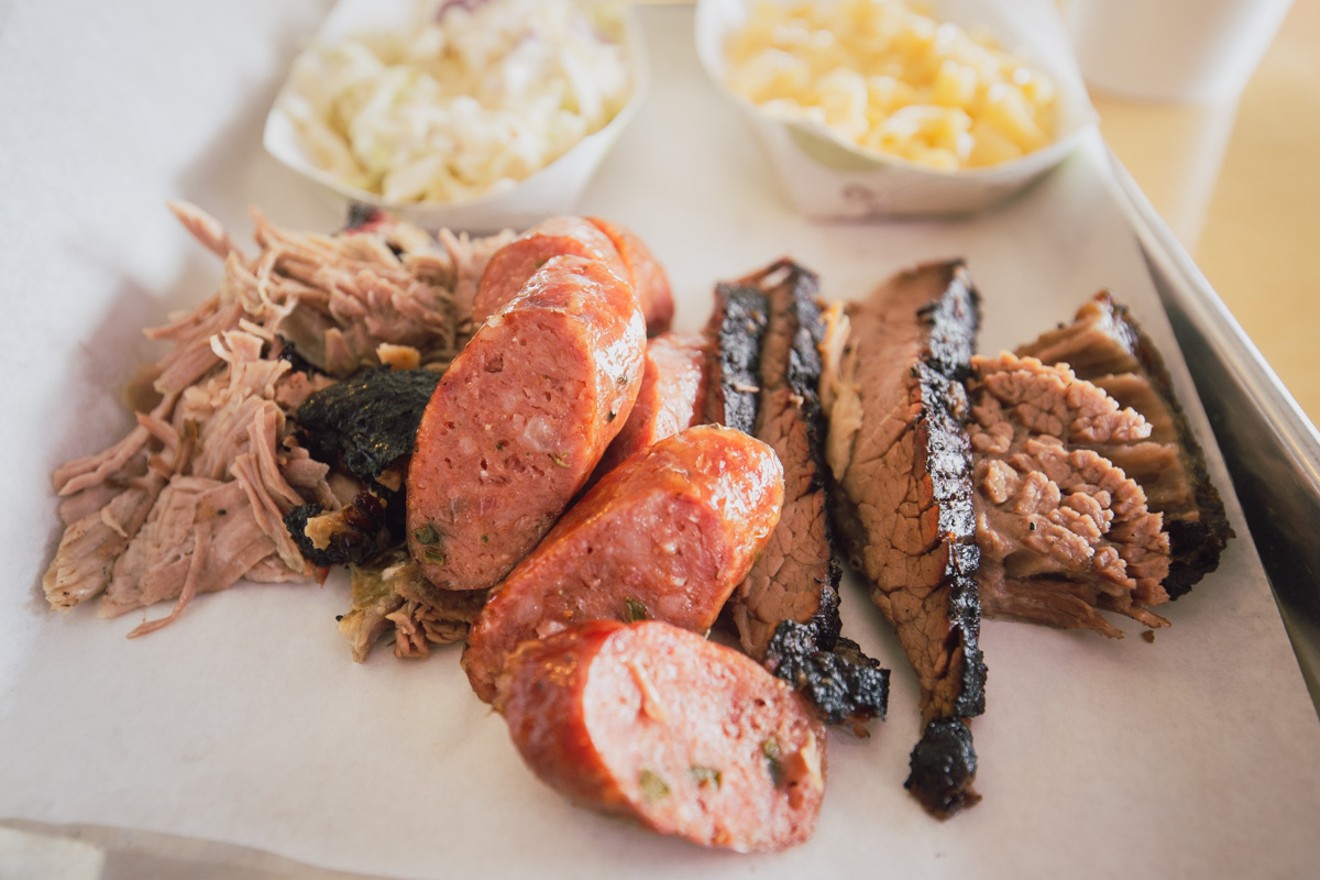 Pulled pork, jalapeño sausage and brisket from Austin's Bar-B-Que are more old-school than craft style, but it makes a tasty meal that's also budget-friendly. Chris Wolfgang
Most of us have heard plenty about how great the economy is, but a glance of our bank account balances begs to differ. Sure, the C-suite crowd has probably seen some big gains in their investment portfolios, but for the rest of us not swimming in extra cash, we need some reliable dining options that won't break the bank. Thankfully, Austin's Bar-B-Que in Addison fits in our budget quite nicely.

Austin's is a new arrival to Dallas' barbecue scene, but owners Robert and Valerie Austin aren't rookies in the restaurant business. Robert worked for the Baker's Ribs chain for more than 25 years, while Valerie tended bar at spots such as the Palomino at the Crescent and the Four Seasons. With an ideal surname for running a Texas barbecue joint, the Austins opened Uptown Bar-B-Que in the spot of the Old Warsaw last year, and they now have taken over the former Duke's Icehouse in Addison for their new namesake venture. 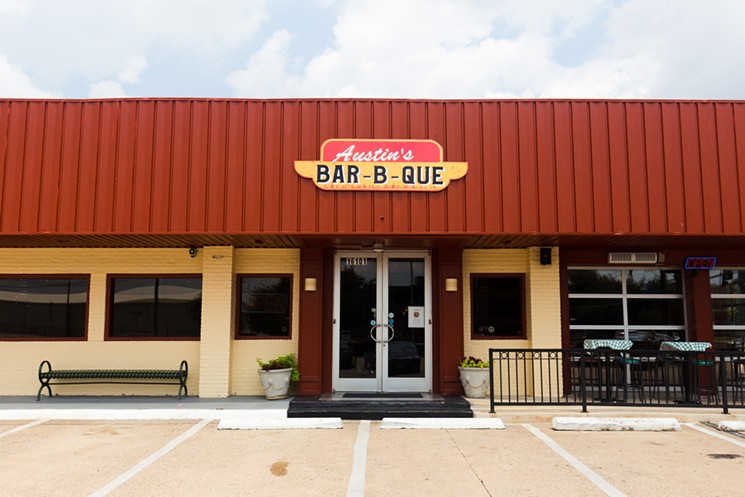 Austin's Bar-B-Que blends barbecue restaurant and neighborhood sports bar in the old Duke's Icehouse in Addison.
Chris Wolfgang
For a place that has been a local watering hole for almost as long as this author can remember, stepping into Austin's Bar-B-Que feels different yet familiar at the same time. Overall, the restaurant seems brighter, with plenty of dining space, yet there's still a large bar area and several TVs that could curry favor with those still looking for a neighborhood bar to call their own. Expanded hours on the weekends will help in that regard. Ordering food takes place at a small window just to the left of the entrance, or patrons can order from the bar.

With a vibe that blends restaurant and sports bar, Austin's Bar-B-Que is no craft barbecue spot. But that's OK with us, and it's definitely OK with our wallets. We ordered a three-meat plate with sliced brisket, pulled pork and jalapeño sausage plus two sides for the bargain basement price of $13.95. Toss in a beverage, and it's entirely possible to enjoy a sizable barbecue lunch and still head home with change from a 20.

If you're looking for a heavy salt-and-pepper bark on your brisket in the highest of Central Texas fashions, Austin's brisket isn't for you. Instead, Austin's serves a more old-school barbecue experience. The brisket we ordered had a thin bark that comes naturally after hours bathing in smoke, and without the assistance of spicy rubs. The lightly smoky flavor of the beef is a winner, though it was a touch on the dry side. Remember when a tray of barbecue like this was affordable? Austin's remembers, and they have priced this hefty meal at less than $14.
Chris Wolfgang
There are similar barky bits to be found in the pulled pork, and the warm bottle of tangy barbecue sauce we were handed with our tray paired nicely with the pig. The jalapeño sausage started off mild, but the heat of the peppers came on nicely with later bites. Meanwhile, we stayed old-school traditional with our side choices. The mac and cheese was somewhat plain, but plenty creamy, while the coleslaw rocked a generous amount of pepper to offset the creamy, sweet dressing.

If your dining budget is more modest, Austin's has options for you. Any of their meats, except ribs or chicken, can be had on a bun for $6.50, or made into a basket with a side of fries for $8.95. If a burger is more your speed, Austin's offers one for $5.50, or you can make it a cheeseburger for 50 cents more.

Not all dining has to be of the expensive variety, and quite frankly, we can't afford to eat like 1-percenters at every meal. That's why small, neighborhood joints like Austin's Bar-B-Que will always have a spot on our list, where food that's kind to your mouth can also be kind to your finances.

Austin's Bar-B-Que, 16101 Keller Springs Road, Addison. 972-803-4383. 11 a.m.-midnight Monday-Thursday; 11 a.m.-2 a.m. Friday-Saturday.
KEEP THE DALLAS OBSERVER FREE... Since we started the Dallas Observer, it has been defined as the free, independent voice of Dallas, and we'd like to keep it that way. With local media under siege, it's more important than ever for us to rally support behind funding our local journalism. You can help by participating in our "I Support" program, allowing us to keep offering readers access to our incisive coverage of local news, food and culture with no paywalls.
Make a one-time donation today for as little as $1.