The Essential Barbecue of Dallas Kris Manning checks his brisket in the smoker at Smokey Joe's BBQ. Kathy Tran
The history of barbecue in Dallas may not have the same cachet as it does in other Texas towns, but that's not to say that the barbecue in Big D suffers by comparison. Far from it — the city sports an impressive range of venues offering smoke-kissed barbecue. Some of them have been around for decades, while others got their start during barbecue's resurgence, which kicked off in the aughts. Then there are relative newcomers, who blend different styles of barbecue with other cultures to create something completely unique.

Find a full discourse on the state of barbecue in Dallas here.

Following are what we consider the essential spots from all three genres that do business in Dallas County. 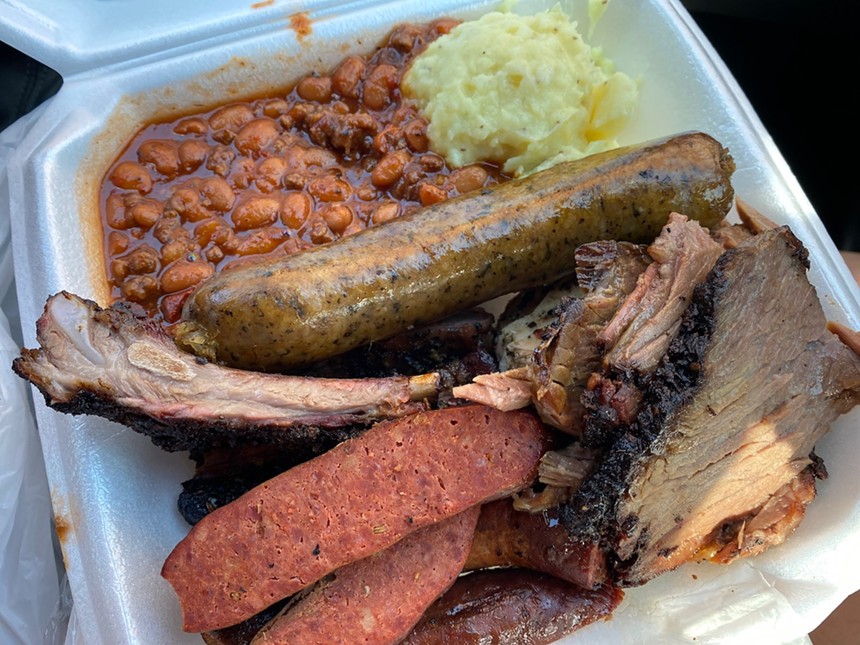 Baby Back Shak serves boudin along with brisket and ribs.
Lauren Drewes Daniels
With a name like Baby Back Shak, it shouldn’t come as a surprise that ribs are a must-order at this Cedars institution. Any barbecue hound worth his rub knows that ribs shouldn’t fall off the bone, but pull off with a gentle tug, and Baby Back Shak nails this measurement. While the brisket is also good, the better pick is boudin, rare to find this far from Louisiana or East Texas. Meshack's Bar-B-Que
Chris Wolfgang
There’s nothing that feels more quintessentially Texas than getting barbecue from a shack on the side of the road. Along with her husband, Travis, Donna Mayes took over her dad’s namesake barbecue stand and serves smoky, delicious barbecue with zero pretense. Meshack's is takeout only, and leaning next to your car while feasting on smoky brisket and tender ribs reminds us of how barbecue used to be. Smokey John's three-meat plate is better than ever.
Dalila Thomas
Brothers Brent and Juan Reaves run the show, having taken over from their father, “Smokey” John Reaves, but his touch remains. Smokey John’s is barbecue plus home cooking (seriously, the catfish is a can’t-miss), and through fires and pandemics, a legion of customers keep coming back for a meal with their extended families. 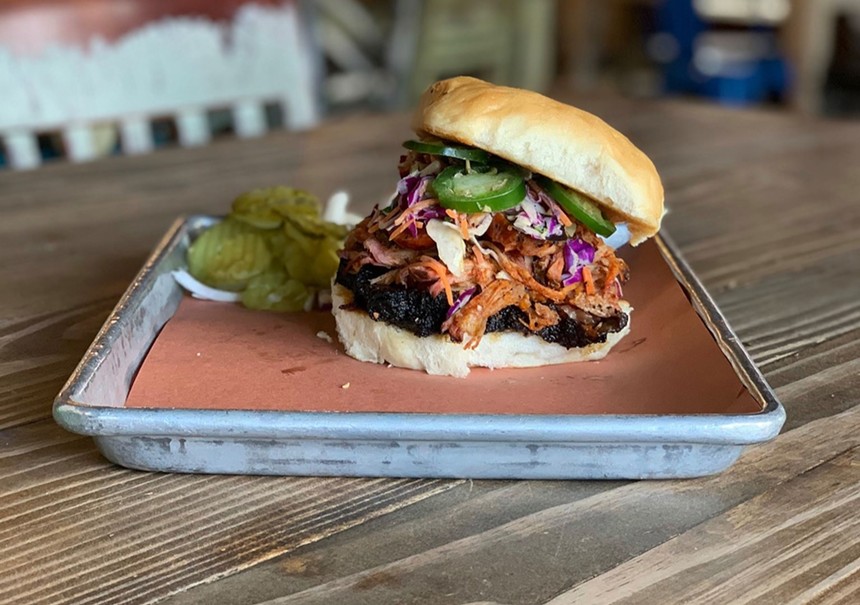 Pecan Lodge's Pitmaster sandwich went up against Smokey John's Big John sandwich.
Courtesy Pecan Lodge
While their time at the Dallas Farmers Market feels like a lifetime ago, Pecan Lodge still stands as perhaps Dallas’ best-known barbecue joint. Just like when the restaurant was in Shed 2 at the market, a line often snakes out the door and down the sidewalk of its Deep Ellum home, where fans line up for fatty brisket and the baked sweet potato and barbacoa combination known as the Hot Mess. Keep your eyes open when burnt ends land on the specials board. 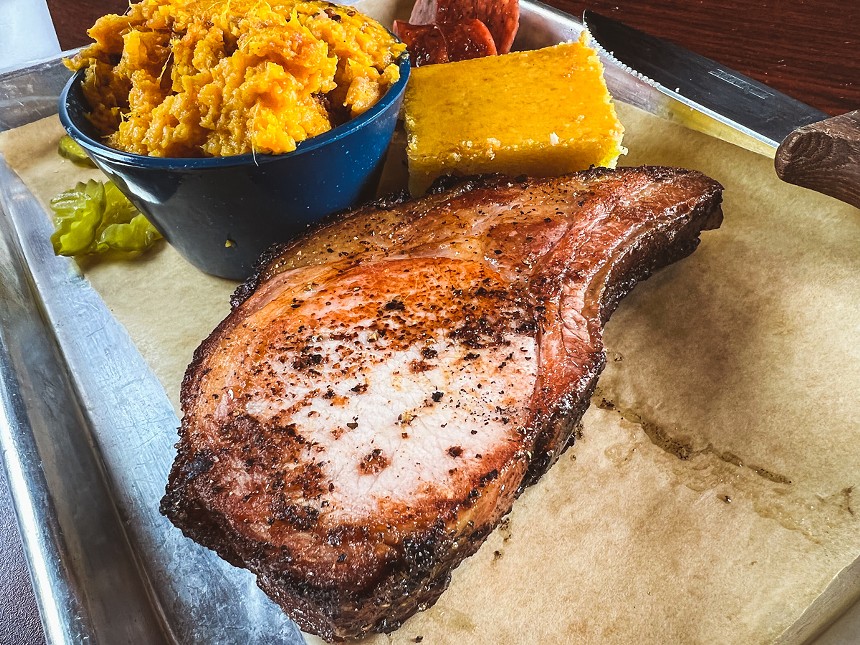 Slow Bone's smoked pork chop will cure what ails you, as long as you're ailing on Sunday or Monday.
Chris Wolfgang
Slow Bone is the insider’s choice for some of the best barbecue in the city limits. Sure, a line forms just after opening, but it moves quickly, and the fact that Slow Bone serves barbecue seven days a week for lunch means you don’t have to rearrange your calendar for a visit. The sides here are the best around, with plenty of vegetarian options. Don't sleep on the (very slowly) smoked pork chops either, a special on Sunday and Mondays only. Cattleack is calling, but just two days a week.
Brian Reinhart
We take our share of the blame for the lines at Cattleack Barbecue, which is hands down one of our favorite barbecue establishments, Dallas or otherwise. We’ve repeatedly sung the praises of Todd David’s Akaushi brisket, which borders on smoky perfection at this two-day-a-week operation. David and his team also crank out a weekly special such as burnt end boudin sausage or pastrami beef ribs. Best to sign up for their weekly emails to stay abreast; they can also alert you when there's no line and plenty of food left. The BBQ Snob sandwich at Heim.
Chris Wolfgang
Travis Heim loves craft barbecue but hates forcing people to stand in line for it. At the Dallas location of his barbecue empire, Heim takes on the challenge of serving breakfast tacos, along with lunch and dinner, so the smokers are always full of meats. As important as dishing out good barbecue is, Heim wants to put a bacon burnt end on every plate without having to wait hours for it, which is something we’re on board with. Brisket, sausage links, ribs, macaroni and cheese, beans and fried okra: Smoky Joe's nails the compulsory part of the program.
Alison McLean
When Kris Manning took over his father’s barbecue spot, his dad’s barbecue was the only thing he knew. But as his curiosity about smoked meats grew, he took the opportunity to experience and learn about styles across the state. Then he applied that knowledge to his menu back home. Today, Smokey Joe’s still has the old-school barbecue vibe, but deftly shows off influences like East Texas hot links, barbecue brakes (all the ends, not just brisket) and a Central Texas brisket that would be at home in the Hill Country. The tortillas and green salsa are as magical as the meat at Zavala's.
Lauren Drewes Daniels
We’ll go ahead and throw out a controversial opinion: Tortillas are just as good if not a better accompaniment than white bread when it comes to barbecue. At Zavala’s, we long for those fluffy tortillas, either on the side or wrapping up a Sloppy Juan. Zavala’s mix of Mexican heritage with Texas barbecue produces brisket and ribs with an extra spicy zing, and there’s a cilantro-heavy green sauce that goes perfectly with anything on the menu. 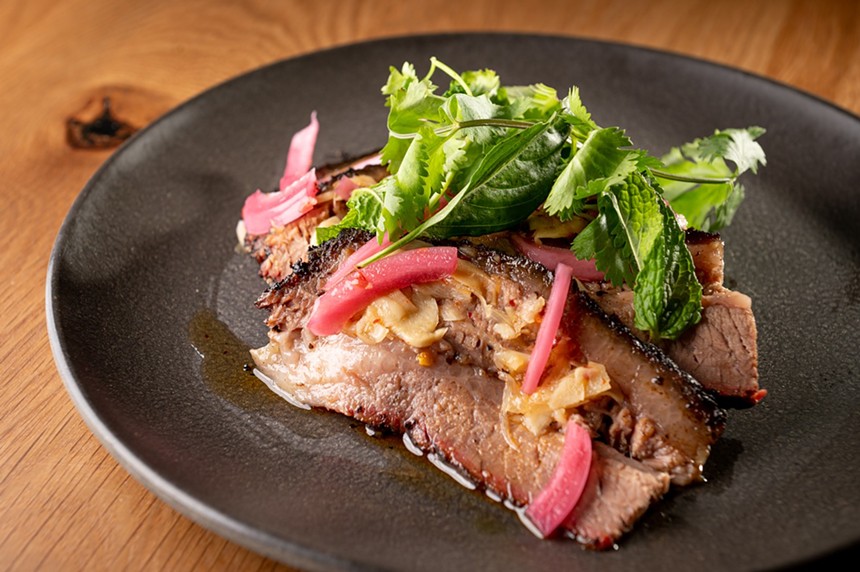 Loro's brisket
Alison McLean
It’s a risky proposition to mess with Texas barbecue and bolder still to blend it with Asian fare without upsetting both cultures. Under the guidance of Uchi’s Tyson Cole and Franklin Barbecue’s Aaron Franklin, Loro manages the feat with brilliantly executed fare that seamlessly blends the two cuisines. For those who don’t have the income to spring for dinner at Uchi or the time to stand in line at Franklin’s, Loro’s resplendent fare is the ideal alternative.
KEEP THE DALLAS OBSERVER FREE... Since we started the Dallas Observer, it has been defined as the free, independent voice of Dallas, and we'd like to keep it that way. With local media under siege, it's more important than ever for us to rally support behind funding our local journalism. You can help by participating in our "I Support" program, allowing us to keep offering readers access to our incisive coverage of local news, food and culture with no paywalls.
Make a one-time donation today for as little as $1.