Cooper’s Meat Market Serves Great Steaks in a Casual Setting. It’s Everything Else That Needs Work. 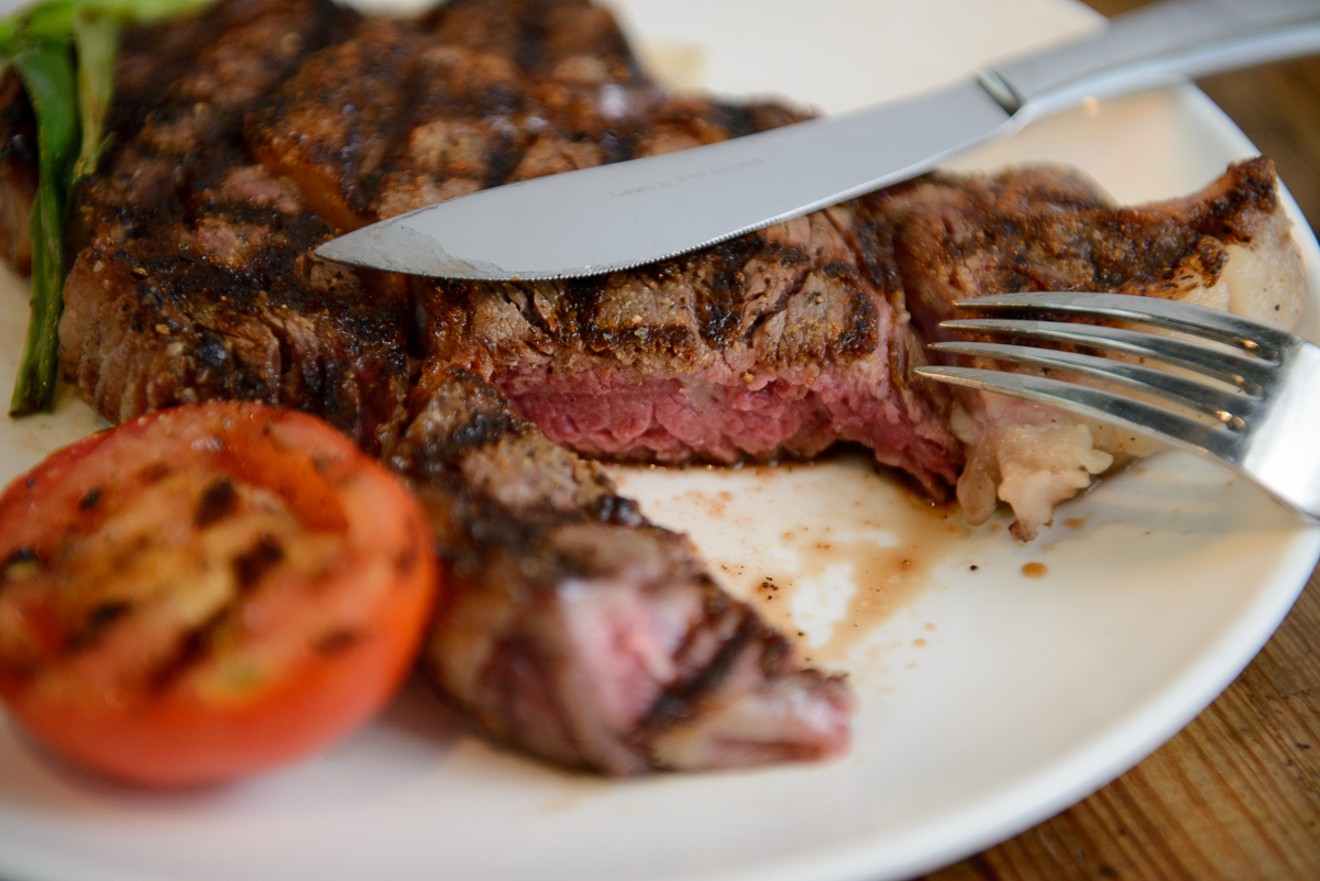 Here, a cut of prime meat and a glass of wine don’t come with pretentious trimmings or high-class condescension. From the design of the space, it’s clear that Cooper’s would like anyone to walk in and feel welcome.

A dozen wooden tables are tucked around the corner from the retail counter, and none of them have linen cloths or fancy floral arrangements. There is no dress code. The service is so informal that one of my waiters called me “kiddo,” and then, a week later, sent me a Facebook friend request. And the menu itself is pared down to the essentials: meats, sides, burgers.

The casual setting here includes fake succulents as centerpieces, a bright TV and the approachability of no tablecloths.
Alison McLean
So far, the results at Cooper’s are mixed, and the pros and cons break down neatly. The market’s foods are almost all terrific, from its house-aged steaks to its sides. But just about everything that isn’t edible is in serious need of improvement.

Let’s start with the good news. Pretty much every single bite of food at Cooper’s is well worth having. Probably the most pleasing part of the menu is its sheer generosity. A first-time visitor might bristle at $9 side dishes and $16 appetizers, but Cooper’s portions are bountiful, and its quality is almost universally high.

Cooper's has a decent selection of meat, should you want it to cook yourself.
Alison McLean
Take that $16 smoked salmon board: It sports a whole fillet of salmon, served warm, plus eight slices of grilled toast and a heaping helping of pickled veggies. Tastes might differ on some of the pickles, like the golden beets or the intensely sweet-and-sour cucumbers, but it’s sheer pleasure to pile salmon on toast with a drizzle of horseradish aioli and a showering of chives. The board is enough for four people to graze on.

The chophouse burger at Cooper's
Alison McLean
Cooper’s serves two burgers at dinnertime, both $15 and both at least five inches tall. These are two-handers, no doubt about it. The chophouse burger, made with a mixture of ground chuck and smoked brisket, is the indisputable champion. It’s topped with house steak sauce, slices of bacon, confetti-like shredded lettuce and a blanket of cheddar. When the burger gets assembled, the cheddar melts onto everything it touches. The fries alongside are modeled after Steak ’n Shake’s.

The black and blue burger could be good, but it has a bit of homework to do. The blue cheese is molten into a sauce, which disintegrates the bun more or less instantly. A more serious problem is the fact that a burger patty coated in traditional blackened seasoning mix can confuse an inexperienced grill cook, who won’t be able to tell when the meat is cooked. We ordered ours medium-rare: When it arrived, the ground chuck was as gray as Soviet architecture.

Rib-eye cooked medium-rare
Alison McLean
Cooper’s forte, of course, is steak. Our $55 bone-in New York strip was, not surprisingly, a great cut of meat. It claimed to be dry-aged, but I’m not sure for how long, because there was no particular aging flavor. (Compare it with a similar cut at Knife.) But the meat was well-marbled, the grilling was superb and our medium-rare request was honored by a steak that stayed a ruddy pink from edge to edge.

Now let’s turn to the bad news. Cooper’s is struggling pretty mightily on the hospitality side of the business. In part that’s because the staff is so tiny. There’s no host, which is fine, but since most of the tables are around a corner in a back nook, my tablemates and I spent the first few minutes of every visit milling around looking lost.

The kitchen staff is also tiny, which can mean prodigious delays when there are more than, say, five people waiting for food. One Friday night, we arrived at 6:45 p.m. and were the sixth party seated. Our appetizer — a board of already-made foods that just had to be assembled — arrived after 30 minutes.

“Your steak will be ready in just a second,” a waiter told us. Then we learned that at Cooper’s, “a second” means 23 more minutes. In total, an appetizer, shared steak and sides took over an hour and a half, which meant we got to watch three episodes of Two and a Half Men on the restaurant’s TV.

The sides may be at the higher price point, but they're plenty big.
Alison McLean
And about that shared steak. I told the staff my girlfriend and I would share a New York strip, and that they could put it in the middle of the table. Instead, the kitchen split the steak for us, which would be thoughtful — if they had split them equally. But my platter had ample steak and the bone, and my girlfriend was handed a sad triangular trimming off the end.

As if waiting an hour for a steak and staring at Charlie Sheen’s perpetually startled face hadn’t been irritating enough, the blatant inequality of the “split” left us steaming. It also left me slicing off an inch-thick chunk of my portion to pass over to my partner.

For the folks in the back, let’s go over a few reminders: Just because a customer is a woman, that doesn’t mean she will eat less meat, or less food in general. Every customer is equal. It’s that simple.

There’s a lot to admire about Cooper’s and its attempt to democratize the steakhouse. But the restaurant portion of the business is only half-developed. The menu is fine, except for that blackened burger and some aggressively salty spinach ($9). But Cooper’s staffing issues imply that maybe this kitchen didn’t really expect to be serving anybody.

A definite reason to go to Cooper's: the meat counter
Alison McLean
Given the quality of the ingredients, it should be no surprise that the butcher counter is great. I’ve developed a habit of stopping by to purchase a prime rib-eye or a hanger steak for once-a-month indulgent nights at home. In my house, there isn’t a 53-minute wait for a cut of meat, men and women get equal portions and only the cat gets called “kiddo.” Also, I pour a pretty big glass of wine.

Cooper's has great meat; but the rest of the business equation needs some work.
Alison McLean
KEEP THE DALLAS OBSERVER FREE... Since we started the Dallas Observer, it has been defined as the free, independent voice of Dallas, and we'd like to keep it that way. With local media under siege, it's more important than ever for us to rally support behind funding our local journalism. You can help by participating in our "I Support" program, allowing us to keep offering readers access to our incisive coverage of local news, food and culture with no paywalls.
Make a one-time donation today for as little as $1.