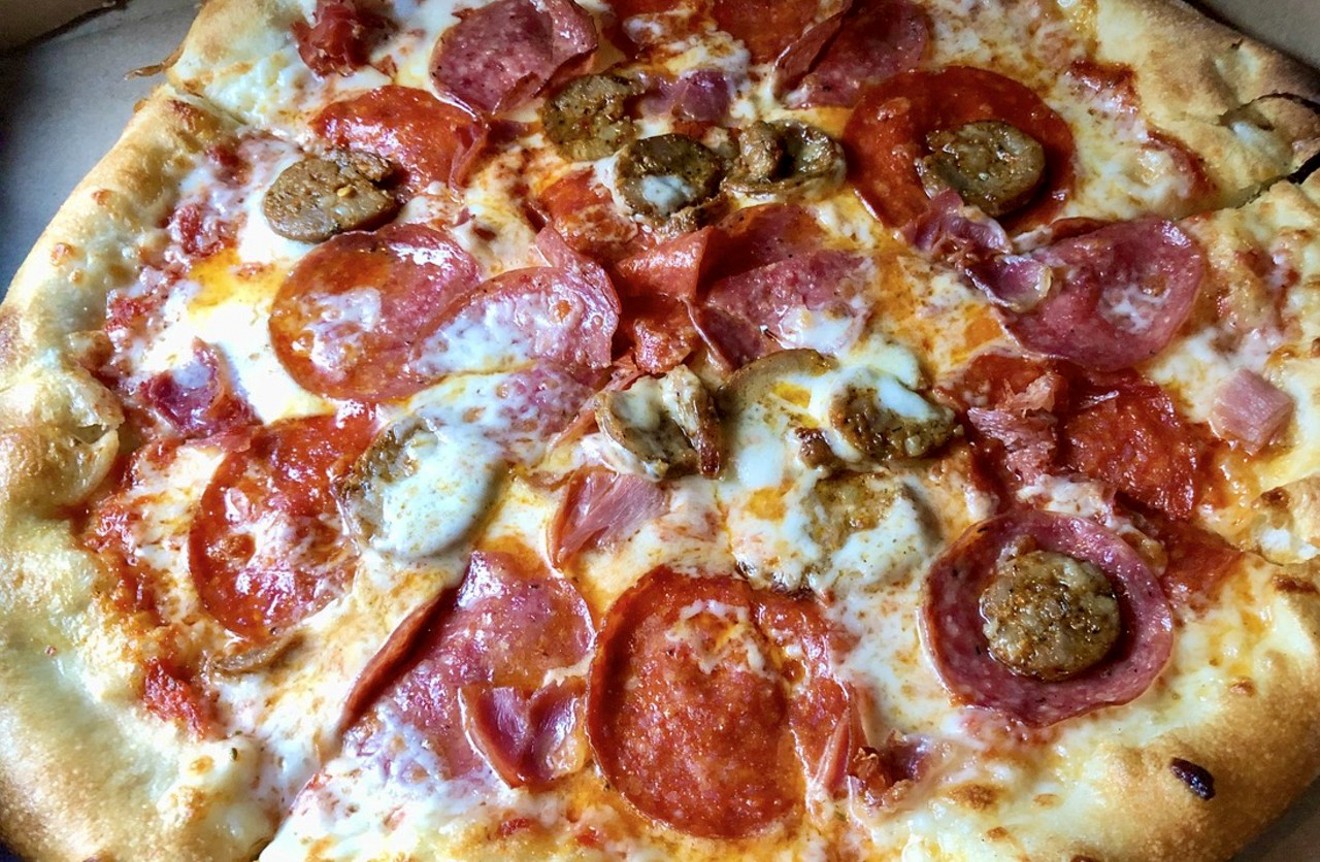 CutiePies' RIP Miss Piggy Lauren Drewes Daniels
Let’s start with a game. Ready? OK: So, what would go in a drink called Dez Caught It?

We’ll get back to that in a minute. First, a new pizza spot has opened in Uptown across from Christies Sports Bar & Grill, at 2916 McKinney Ave., in what was most recently the shiny, silver Shell Shack.

The interior of CutiePies Pizza & Bar has been thoroughly transformed. It's very contemporary, with gray and olive tones, and framed art that's thoughtfully kitschy. The large bar remains, and there's a swanky living room area in a corner, where you can watch an enormous version of whatever show or game is on the large TV.

The restaurant is brought to us by One Entertainment Group, which also owns Theory and Playground in Dallas; Texas Republic and Landmark in Fort Worth. I spoke with one of the co-owners, Steven Buchner, about the place, particularly the pizza.

Buchner spent months with chef David Rodriguez perfecting the pizza dough, which is cooked in a gas-fired brick oven.

“The recipe, especially the dough for the pizza, is a culmination of a lot of different stuff. I really like a thinner, lighter-style dough," Buchner says. "I hate a huge dough ring on a pizza. I wanted something people can enjoy thoroughly. So, we made the dough airy, fluffy and light, especially that outer ring part.”

There are a dozen specialty pizzas, some of which include Jimmy’s Sausage, truffled honey and a buffalo milk-infused mozzarella, which is cow’s milk mozzarella with buffalo milk added to it.

There are also pizza nachos, which are their house-made pizza chips served with mozzarella and pizza sauce, then you can add toppings, just like you would a pizza. All the pizzas can also be made with a gluten-friendly crust.

In addition to the bar, the craft cocktail menu has about a dozen offerings, one of which is the Dez Caught It: "A big F*kn shot of Don Julio because the pain is still real.”

Other cocktails include Man Bun, Casually Judging and Old AF. Yes, of course you can keep playing the guess-the-booze game. Then, check the menu.

It should be noted CutiePies is not open for lunch during the week, but happy hour is from 4 to 7 p.m. Monday through Friday and includes $3 off light drafts, $3 off craft cocktails, $2 off wines by the glass and half-price pizza nachos.

CutiePies Pizza and Bar, 2916 McKinney Ave. (Uptown). Open 4 p.m. to 2 a.m. Monday through Friday, 11 a.m. to 2 a.m. Saturday, 11 a.m. to midnight Sunday.
KEEP THE DALLAS OBSERVER FREE... Since we started the Dallas Observer, it has been defined as the free, independent voice of Dallas, and we'd like to keep it that way. With local media under siege, it's more important than ever for us to rally support behind funding our local journalism. You can help by participating in our "I Support" program, allowing us to keep offering readers access to our incisive coverage of local news, food and culture with no paywalls.
Make a one-time donation today for as little as $1.