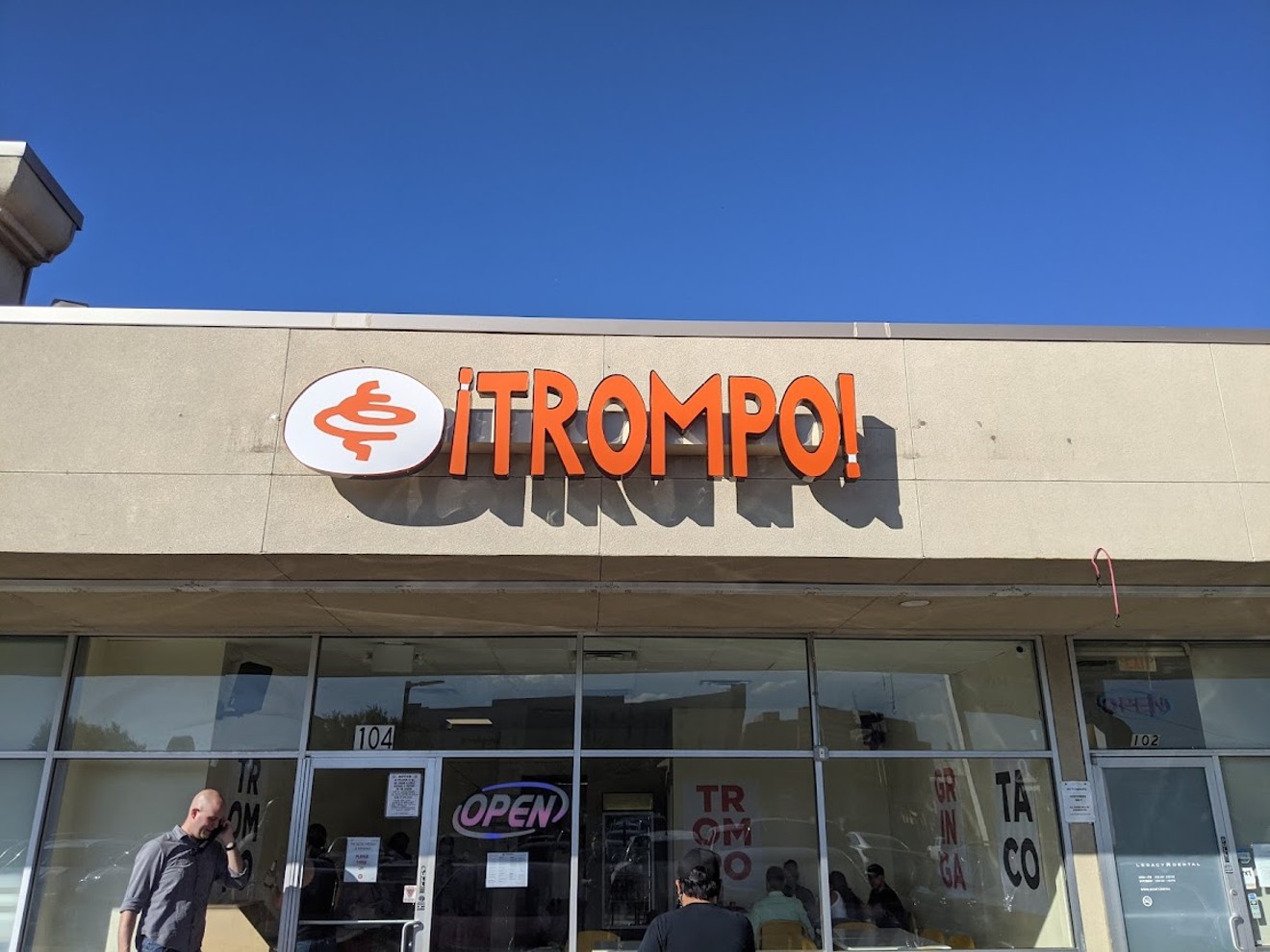 The exterior of Trompo's new East Dallas shop. Brian Reinhart
After months of eager anticipation, the beloved taco shop Trompo has opened its first-ever location north of the Trinity River.

It’s the second location for the business, which started selling its namesake trompo tacos in West Dallas before moving to the Bishop Arts neighborhood. The Bishop Arts spot remains open, and owner Luis Olvera has taken a few creative steps to make his two Trompos a little bit different.

For one thing, the dining area at the Bishop Arts space is almost entirely outdoors in a shaded patio protected from the bustle of the street. The new East Dallas location at 4201 Gaston Ave., meanwhile, is more like the very first Trompo: a modest storefront with a minimalist dining room and a little doorway into the kitchen.

As for interior design: Olvera’s crew printed off giant sheets of paper that say words like “TROMPO” and “TACO,” and pinned them to the walls with thumbtacks. That’s it. It’s perfect.

There are also new menu items at the new location — specifically, sandwiches. The trompo slider special from West Dallas has now been expanded into a full-sized cheeseburger topped with the taqueria’s famous marinated and sliced pork, plus avocados and jalapeños ($10). There’s a slow-cooked pork torta as well ($10) and if you want to be healthy, you can get an order of loaded fries topped with queso, pico, jalapeños and choice of meat ($7).

An East Dallas location of Trompo had been in the works for months, delayed not just by the pandemic but by the city government’s ongoing struggles to issue permits and conduct inspections. Olvera posted a teaser for his new location on Facebook all the way back in January. 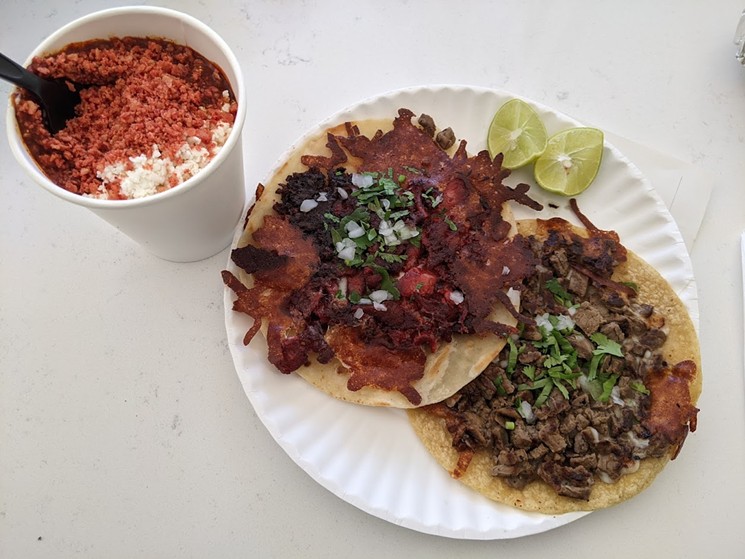 Taki's topped elotes and two of Trompo's classic quesadillas, the gringa (with trompo pork) and pirata (with steak).
Brian Reinhart
In March, he spoke to the Observer about his struggle to open Trompo East Dallas, in the context of an article about his political activism in local elections. Dallas was at the time months behind on its permitting process for small businesses, understaffed in many departments and struggling to keep up with construction permits especially, due to the February ice storm which caused severe damage to hundreds of buildings across the city.

Those delays all had an effect on Trompo, as did the caprices of city staff, many of whom have differing standards in application and inspection processes.

“The city of Dallas is full of bullies and bureaucracy,” Olvera told me at the time, though he also added that city departments are full of good and helpful people, too.

But Trompo East is here now. The taqueria has finally crossed the river, bringing its big vertical spit of bold red pork with it. Take that, bureaucrats.

Trompo, 4201 Gaston Ave., No. 104, 11 a.m.-9 p.m. Monday - Thursday, 11 a.m.-11 p.m. Friday and Saturday, 11 a.m.-7 p.m. Sunday.
KEEP THE DALLAS OBSERVER FREE... Since we started the Dallas Observer, it has been defined as the free, independent voice of Dallas, and we'd like to keep it that way. With local media under siege, it's more important than ever for us to rally support behind funding our local journalism. You can help by participating in our "I Support" program, allowing us to keep offering readers access to our incisive coverage of local news, food and culture with no paywalls.
Make a one-time donation today for as little as $1.