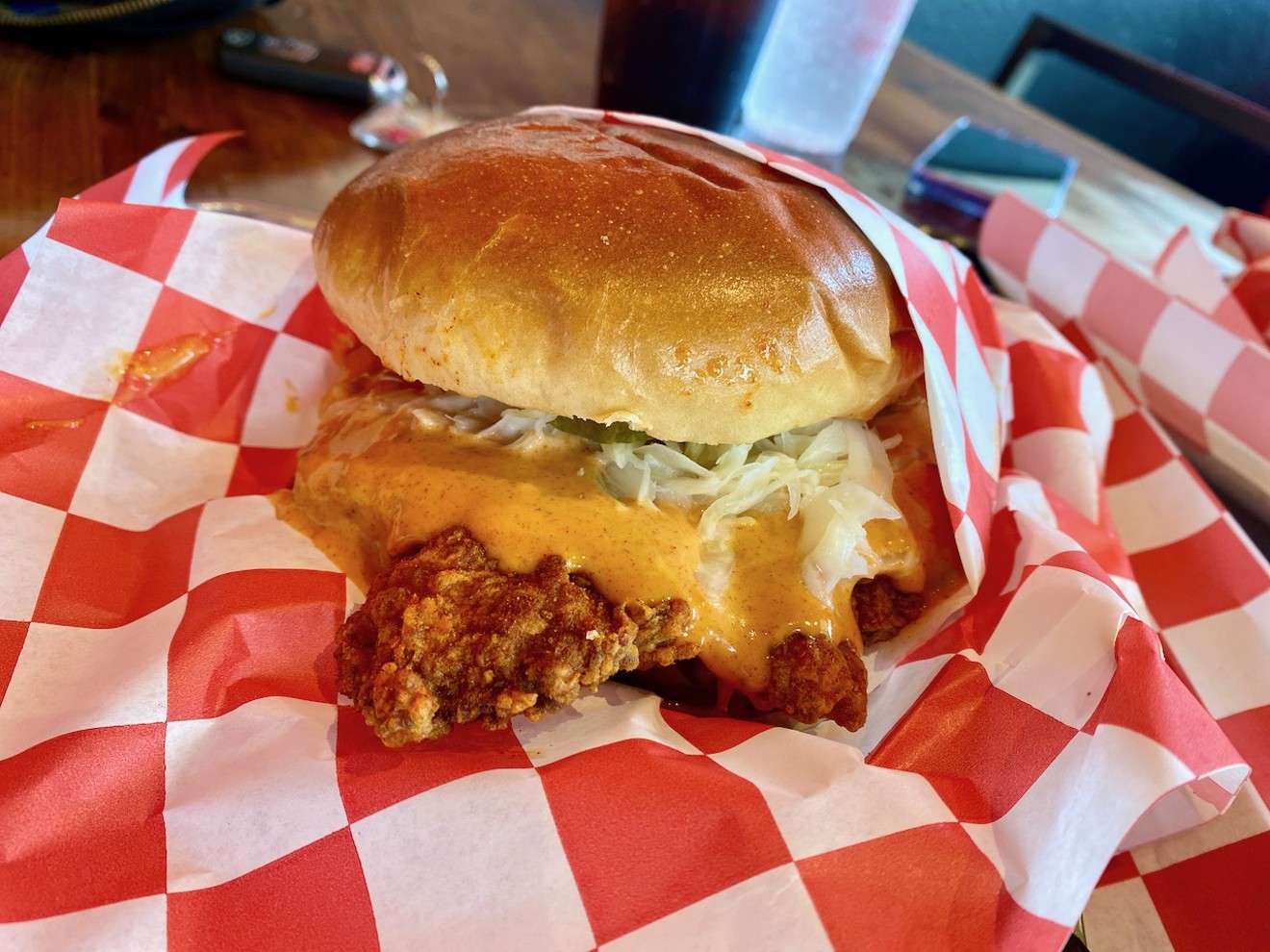 A substantial brioche bun holds this hot mess together nicely. Lauren Drewes Daniels
Hangry Joe’s Hot Chicken is taking root in North Texas. This franchise is from Virginia and founded by Mike Kim and Derek Cha, whose previous food business endeavor was a frozen yogurt spot. According to their website, they visited popular Nashville-style hot chicken restaurants in LA, Nashville and San Francisco to develop their own take on the trending culinary segment. 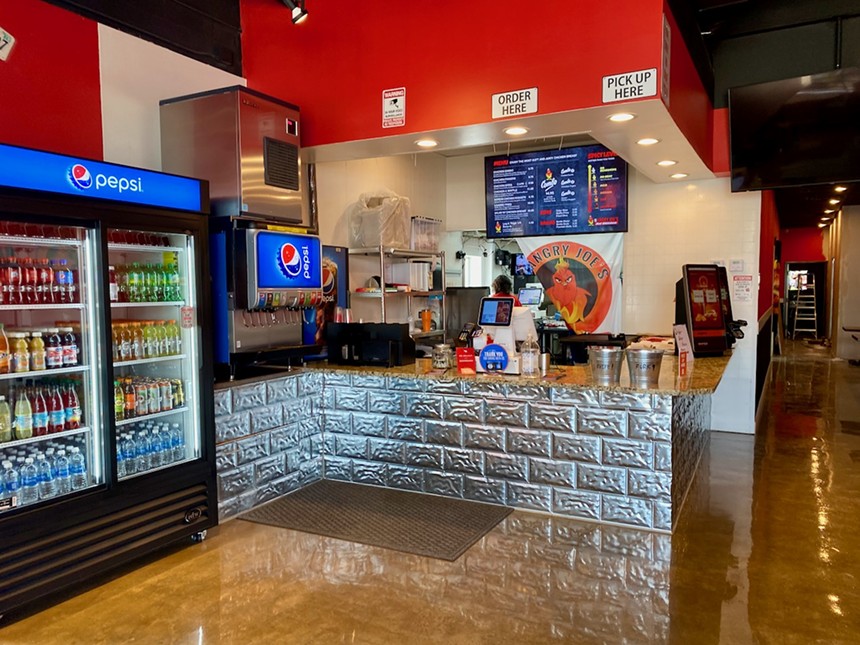 Hangry Joe's recently opened on Camp Wisdom Road and another location is planned for Coppell.
Lauren Drewes Daniels
They have one location in south Dallas in the Redbird area off Camp Wisdom Road. They’re still putting some finishing touches on the interior, which is clean and bright, but are open for business.

The sando is served on a brioche bun ($10.75) with a healthy does of their house-made Hangry sauce, an reddish-orange mayo-based dressing with a tang. A mound of vinegar slaw adds a bit of crunch along with a few thick slices of pickles. The chicken fillet here is fairly flat, rather than plump chicken strips piled onto a bun, which is often the case. The brioche bun is substantial; it holds this hot mess together nicely. We got the mild spice (level three out of six) and it was just that: mild. Discernible, but no sweat or lingering heat on lips. 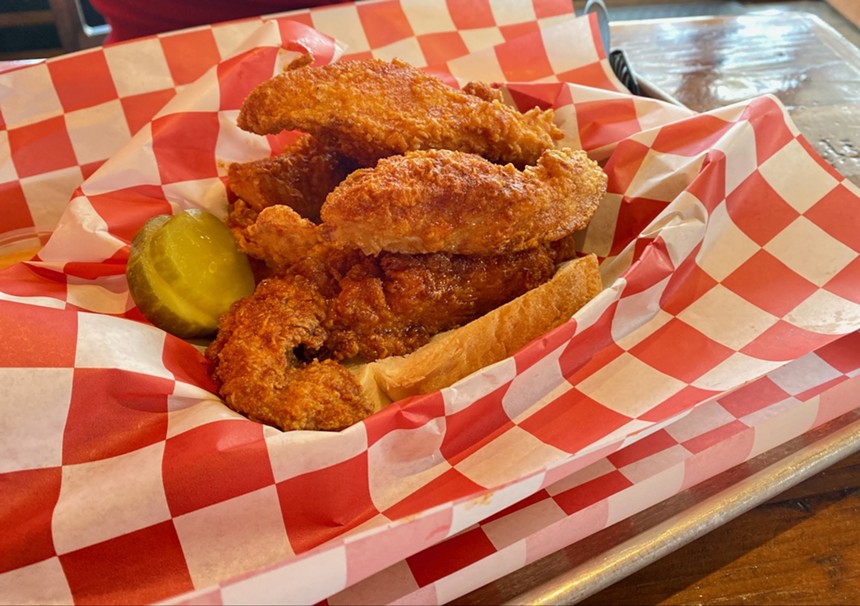 Hangry Joe's also has Korean chicken nuggets ($10.75) that come in a soy garlic sauce along with rice.

The sando, strips and Korean nuggets are all available as a combo meal with waffle fries and a drink for $15.95. 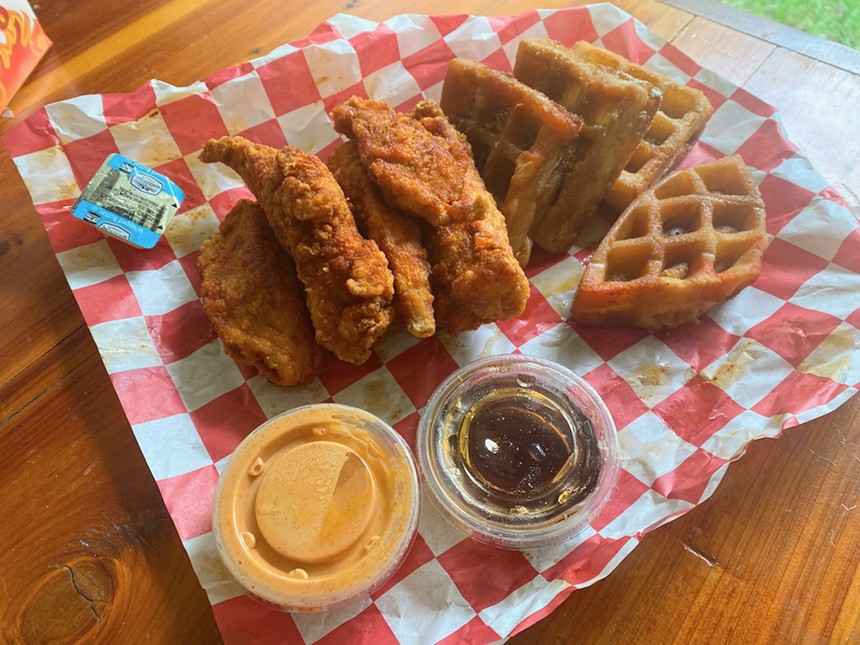 The chicken and waffles were some of the best we've had.
Lauren Drewes Daniels
We also tried the chicken and waffles ($12.95). We’ve had so many dried-out chicken strips and bland waffles, we're often left with more questions than answers on the appeal. Well, now we know. These house-made funnel-cake-like waffles have a light airy texture that is slightly crispier than the typical waffle. An order is served with four slightly sweet waffle triangles and four hot chicken strips along with a packet of syrup, honey butter and their house sauce.

Pull a corner off a waffle and a chunk of a spicy chicken strip and dip it into the container of syrup. It’s a fascinating marriage of flavors and textures. 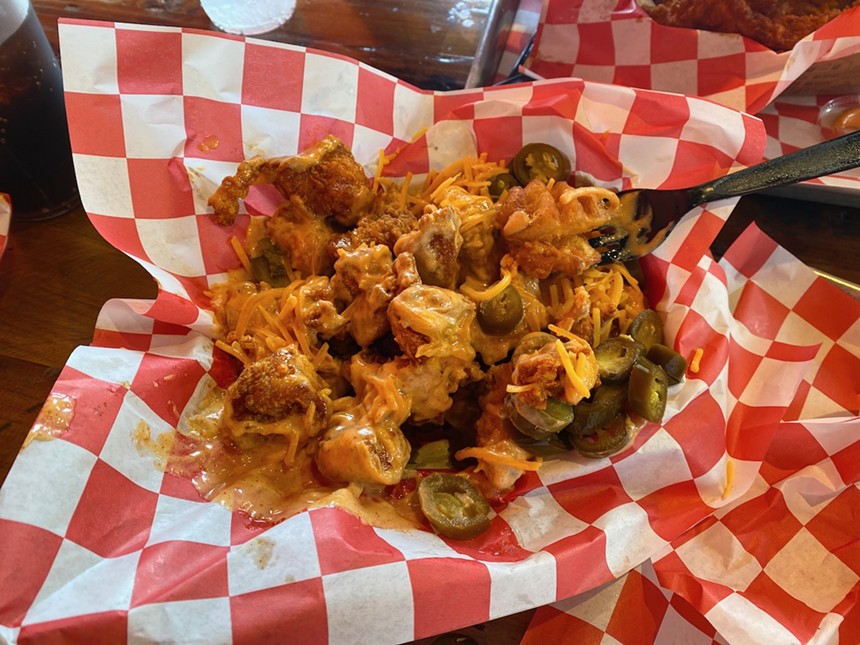 The loaded waffle fries are a full meal with mostly thick chunks of chicken and only a handful of fries at the bottom.
Lauren Drewes Daniels
The loaded waffle fries ($11.95) are a scene. An order is about 80% chicken and 20% waffle fries. You can get the chicken at any heat level, but be warned they come with loads of jalapeños, along with cheese and the Hangry sauce. We got these as a side and could barely make it through half of the order; we took a lot of food home.

There’s a leg and bone-in thigh option for just $4.95, which is served with white bread and their slaw.

Hangry Joe’s is rapidly expanding up north in Virginia and an additional location is planned for Coppell.

They have online ordering with delivery through DoorDash and a drive-thru at the Camp Wisdom location.

4140 Camp Wisdom Road (75237), 11 a.m. to 9 p.m. Monday - Saturday; 12 - 8 p.m. Sunday
KEEP THE DALLAS OBSERVER FREE... Since we started the Dallas Observer, it has been defined as the free, independent voice of Dallas, and we'd like to keep it that way. With local media under siege, it's more important than ever for us to rally support behind funding our local journalism. You can help by participating in our "I Support" program, allowing us to keep offering readers access to our incisive coverage of local news, food and culture with no paywalls.
Make a one-time donation today for as little as $1.