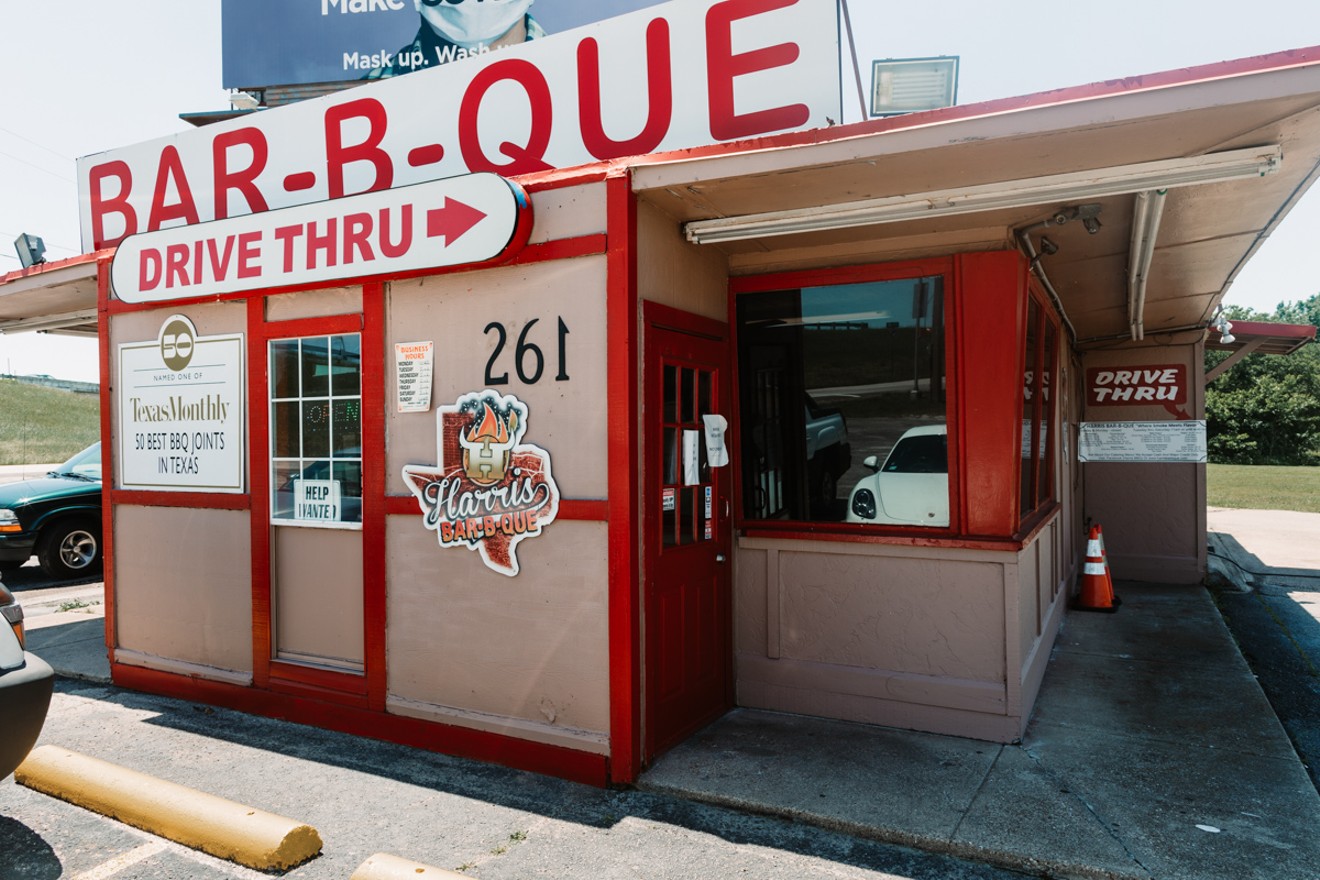 Harris Bar-B-Que moved from Waxahachie to Cedar Hill in 2019. Chris Wolfgang
There's a fair bit of patience required in food writing that most people may not realize. As hungry as we might be, we still need photos of whatever tasty fare we're about to enjoy before we can dive in, because you, dear reader, are visual creatures and pictures of empty plates just don't seem to draw you in.

On this sunny day, our photo obligations met, we devoted both of our hands to the succulent brisket, ribs and sausage from Harris Bar-B-Que in Cedar Hill. We were trying to subdue the urge to go full ham, as we've got a reputation to uphold of being somewhat civilized. Masked up, owner Kelvin Harris appeared next to us as we began to eat at the picnic table next to his eponymous restaurant.

"I saw you taking some photos," Harris says. "Is everything smoked OK?" 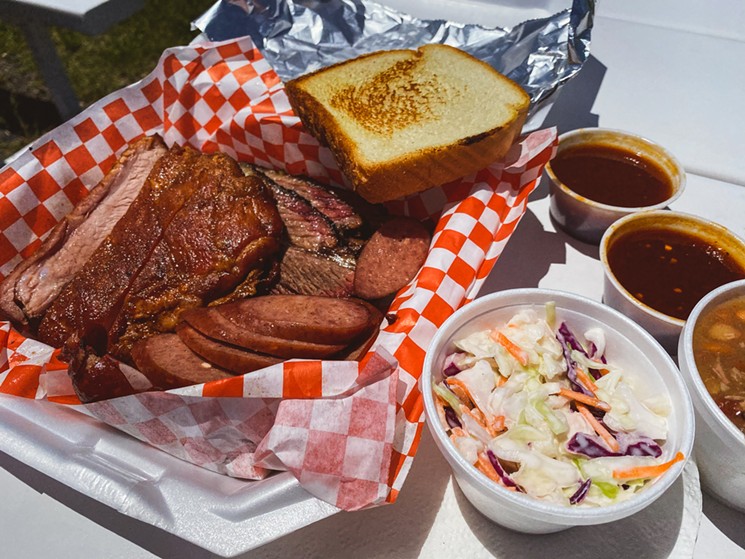 The Texas Trinity of barbecue (brisket, ribs and sausage) courtesy of Harris Bar-B-Que.
Chris Wolfgang
Oh yes, the barbecue here is better than just OK. Harris brought his noted barbecue restaurant north from Waxahachie in November of 2019, after it was named one of the state's top 50 barbecue joints by Texas Monthly. For Harris, the move made sense on multiple fronts.

"I live in Cedar Hill anyway, so I'm five minutes from work now if I hit the traffic lights," Harris says. "Before, I was driving to Dallas for supplies, then back down to Waxahachie. Plus, this place gets a lot more traffic."

Of course, settling into a new location took some work, and just as the kinks were ironed out, the pandemic shut everything down. Fortunately, Harris Bar-B-Que's new location had a feature that worked in their favor: a drive-thru window.

"I didn't want the window, but my wife said we should leave it," Harris recalls. "Then, when COVID shut everything down, it's really kept us going. We've been fortunate." 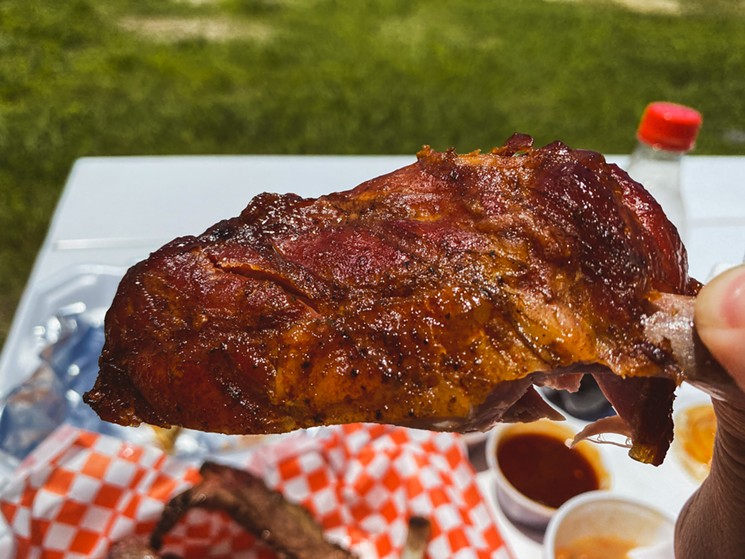 We subdued our carnivore instincts momentarily for a glorious rib photo.
Chris Wolfgang
Despite keeping his dining room closed, Harris has still done a solid drive-thru and to-go business over the last year while catering gigs have been a steady source of work as well. Harris wants to keep his wife, mother-in-law and two employees as safe as possible and doesn't plan to open the modest dining room until he feels it's truly safe, which is something we can't argue with.

We can't argue with any of Harris' decisions on the food front, either. We wanted to try a little bit of everything, so a three-meat and two-side tray fit the bill nicely for $19.50.  Our three slices of brisket were impossibly moist and tender, and the lightly glazed pork ribs were remarkable in their simple execution and flavor. 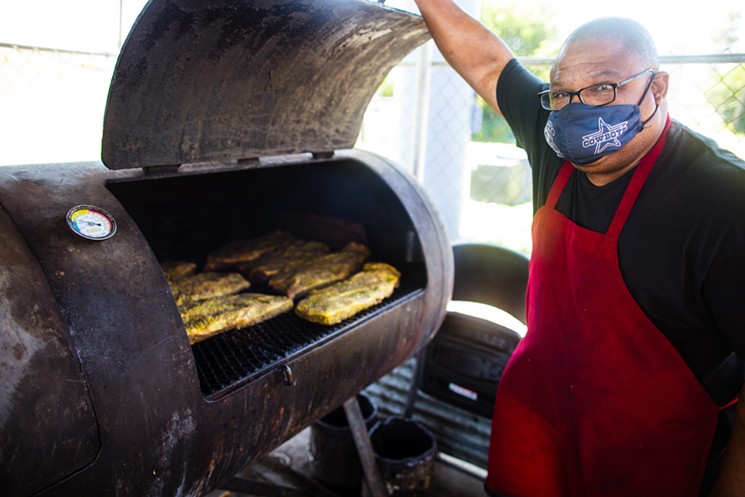 These briskets are ready for smoking under Kelvin Harris' masterful guidance.
Chris Wolfgang
We alternated dunking slices of sausage in Harris' duo of sauces — a tangy traditional version, then a hotter sauce that's kicked up with visible flakes of red pepper. We balanced the heat with crunchy mouthfuls of cool coleslaw. Each bite of pinto beans has bits of beef and pork, all living harmoniously together.

Suitably stuffed, we caught up with Harris, loading his smoker with more post oak for the fire and briskets for the next day. We reassured him that his barbecue was better than just OK, and we're glad that he's found a home in Cedar Hill. His smile was readily evident, even behind his Dallas Cowboys mask.

"Despite everything, we really have been blessed," Harris said.

Harris Bar-B-Que, 261 S. Hwy 67, Cedar Hill. Open Tuesday through Saturday, 11 a.m. - sold out
KEEP THE DALLAS OBSERVER FREE... Since we started the Dallas Observer, it has been defined as the free, independent voice of Dallas, and we'd like to keep it that way. With local media under siege, it's more important than ever for us to rally support behind funding our local journalism. You can help by participating in our "I Support" program, allowing us to keep offering readers access to our incisive coverage of local news, food and culture with no paywalls.
Make a one-time donation today for as little as $1.