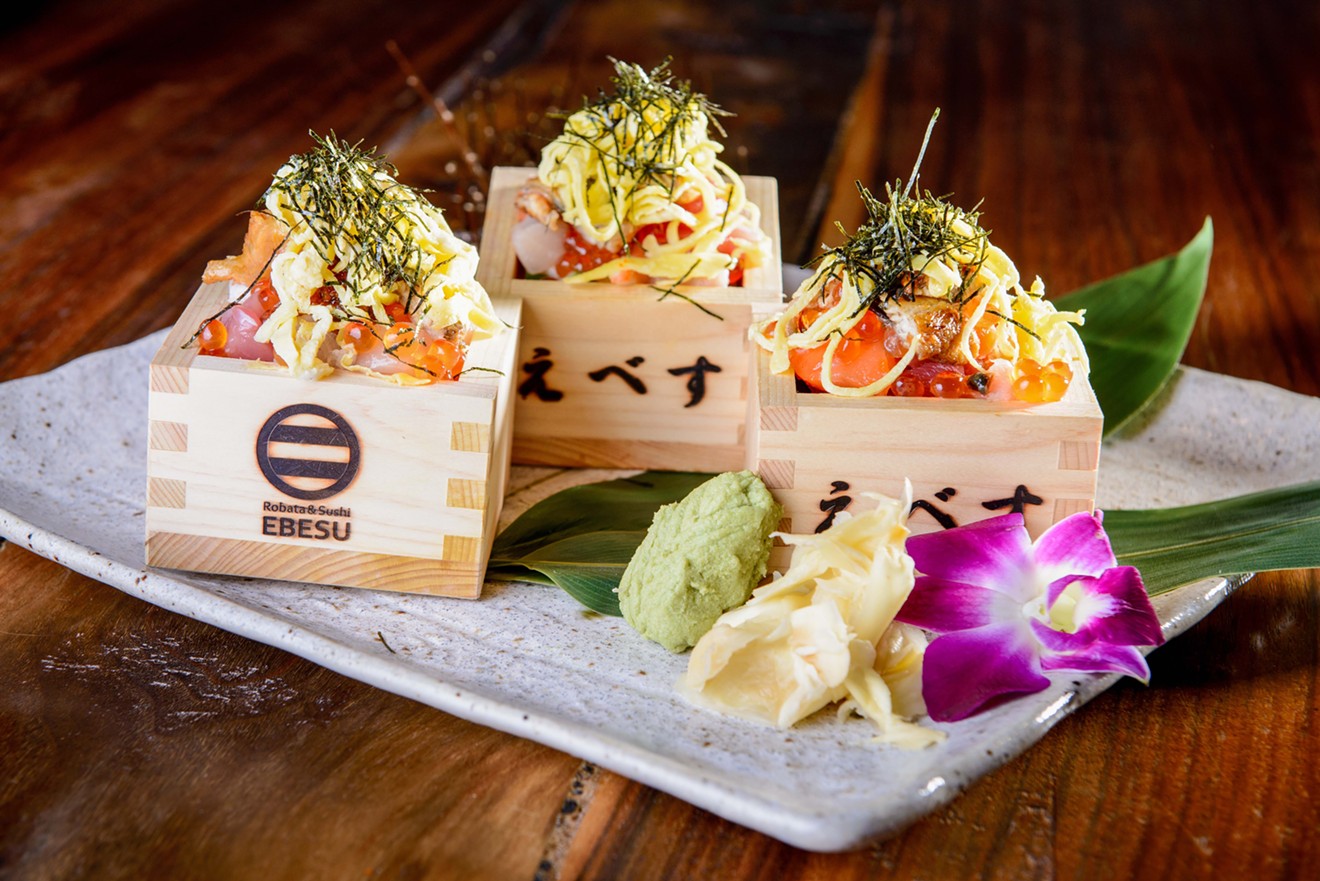 To share or not to share: Ryoshi meshi Alison McLean
While the rest of America was looking elsewhere, Dallas quietly built one of the country’s finest Japanese food scenes. Direct flights to Tokyo, a thriving business scene and the recent arrival of Toyota, Honda, Fujifilm and other corporate offices have all helped concentrate a wealth of sashimi, donburi and katsu on this unlikely patch of hot, grassy flatlands.

Many of the Dallas area’s best Japanese restaurants can be traced back to one restaurant: Royal Tokyo. Employees and associates of Royal Tokyo went on to found Teppo, Tei Tei Robata Bar, Tei-An, Yutaka Sushi Bistro and Mr. Max. Only Sushi Robata seems to have an independent ancestry.

Now a newcomer has arrived, fresh from Japan and catapulting itself directly to the top tier.

It’s located in downtown Plano, in a historic storefront. It specializes in binchotan-grilled foods, elaborate rice bowls and sushi rolls, which are pressed together in long wooden boxes. Its name is Ebesu Robata and Sushi.

Ebesu, in downtown Plano, is exceeding expectations.
Alison McLean
Let’s take the specialties one at a time.

Rice bowls at Ebesu come in varying degrees of splendor, from a $30 offering topped with a mountain of salmon roe to the more rustic, comforting hitsuma-bushi ($16). On the tray bearing the latter dish, diners find a bowl of rice, seaweed sheets and grilled eel; a tiny side dish of garnishes like scallion and ginger; and a tea pot full of dashi. Try the rice bowl as it is, then add the broth to create a simple, flavorful soup.

Even better: ryoshi meshi, a trio of three sashimi-loaded sake boxes ($24). Each box is filled with sushi rice and slices of raw tuna, yellowtail, salmon and white fish. There’s a showering of garnishes, as well, including two kinds of roe.

It goes without saying that the seafood is high quality; more remarkable to me is the rice. One bite of the rice at Ebesu is enough to show how far ahead this kitchen is of the average sushi spot. Rice is supposed to have texture, flavor and warmth; if only it were always this beautifully seasoned with vinegar, this just-above-room-temperature. 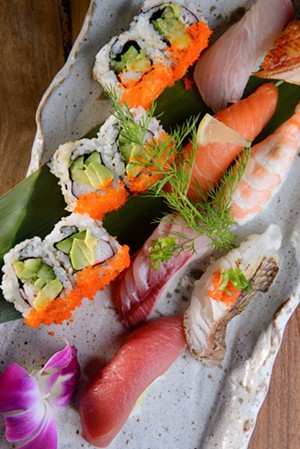 Sushi
Alison McLean
I don’t know why the ryoshi meshi boxes come in threes, but they make a good sharing platter for a group, or an extremely hearty meal for one greedy person.

The second specialty at Ebesu is pressed sushi, in which the rice and other ingredients are assembled and folded into a wooden box. The box has small slats so that the roll inside can be sliced but plated intact. The process is a joy to watch.

Ebesu’s chefs use these boxes to make rolls like the shichimi tuna tataki ($16), five inch-wide squares of flavorful rice topped with thin slices of tuna and serrano pepper, along with a frizzle of shredded daikon. On a piece of sushi this big and fatty, the serrano pepper’s heat is absorbed fully.

But anyone sitting at the sushi bar, watching the rolls get pressed, will inevitably notice one roll that stands out from the rest. It requires an extra-huge box and laborious assembly; the chefs dig their hands into a bowl of fried leeks. It’s served with outrageous flair, as one of Plano’s most show-stopping presentations from any cuisine.

Fully aware of how startling this centerpiece is, Ebesu put an exclamation mark in its name: “Super-Long Niku!” The super-long part is self-evident; its 16 pieces come perched atop a skinny wooden rail.

Super-long Niku(!)
Alison McLean
The real exclamation mark, though, is the Super-Long Niku’s excellence. Thin, smokily char-grilled pieces of hanging tenderloin are lined up on top of a peppery puree of arugula. An avalanche of fried leeks and microgreens finish off the display ($28). The balance of greenery to meat, the slight vinegaring of the rice and the crunch of leeks all hang in perfect balance. Bring friends and make this a centerpiece.

The beef on the Super-Long Niku comes from Ebesu’s third specialty area, the binchotan grill built into the left side of the sushi bar, where an employee grills meats and vegetables to order over charcoal. After cooking, many of the veggies get showered in bonito flakes, including smoky, chopped eggplant ($6) and flawlessly tender okra ($5).

Duck breast ($12) arrived with a layer of crisp rendered fat around the outside, and a salmon collar special ($12) had a combination of gently charred exterior and tender inside, which is only topped, locally, by Tei Tei Robata.

There’s more to Ebesu than those three specialty areas, including traditional sushi rolls, sashimi and a lineup of cocktails that mostly feature sparkling sakes. (The restaurant is reportedly working on its currently rather elementary sake selection, but servers know the list well and make excellent recommendations.)

Keep an eye on the paper menu, which lists daily specials such as a soft shell crab roll in the shape of a large-format makimono, with seaweed on the outside holding the abundance of fried crab, cucumber and shiso leaf ($12). 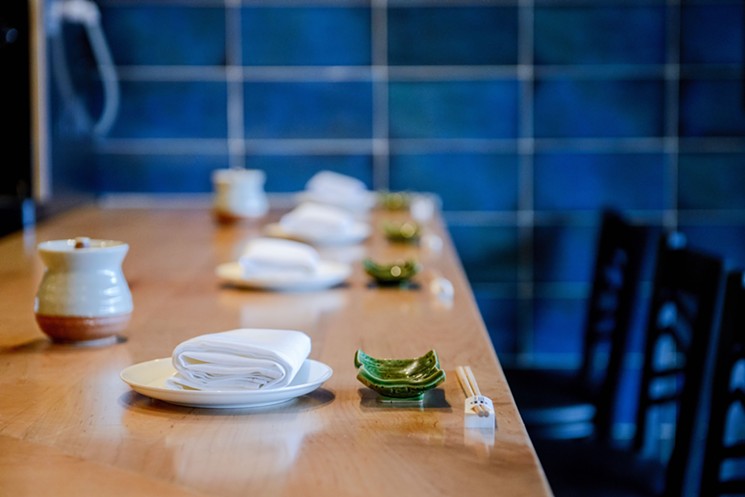 A newcomer restaurant has arrived, fresh from Japan and catapulting itself directly to the top tier.
Alison McLean
We had varying success with appetizers; Ebesu’s shumai dumplings are generously filled and well-made ($8), and its agedashi tofu is some of the best in town ($6). But our tempura sampler showed off excellent technique while lacking in salt or much other flavor ($14).

Still, it’s impressive to visit a restaurant multiple times, order half the menu and come away wishing just one dish was a little different. And, given how good Ebesu already is and how great it could become, it’s remarkable that so few people seem to be making the trip to downtown Plano to try it.

In Dallas, a restaurant this good would be packed every night of the week.

Ebesu Robata and Sushi, 1007 E. 15th St., Plano. 972-212-4564, ebesu-usa.com. Open 5 to 10:30 p.m. Tuesday through Thursday; 5 to 11 p.m. Friday and Saturday; 5 to 9:30 p.m. Sunday.
KEEP THE DALLAS OBSERVER FREE... Since we started the Dallas Observer, it has been defined as the free, independent voice of Dallas, and we'd like to keep it that way. With local media under siege, it's more important than ever for us to rally support behind funding our local journalism. You can help by participating in our "I Support" program, allowing us to keep offering readers access to our incisive coverage of local news, food and culture with no paywalls.
Make a one-time donation today for as little as $1.