Review: Krio Celebrates a Year of Asian-Cajun Classics in the Bishop Arts District

The fried oyster bánh mì at Krio comes on a crusty yet soft loaf and overflows with carrots, jalapeños, cilantro and a spicy sauce. Alison McLean
The Bishop Arts District is endangered by its own success. All around its historic handful of eclectic, walkable city blocks, hulking high-rise apartment buildings are sprouting up. Many of them take up hundreds of feet of curbside space, so the diverse streetscape on Bishop Avenue will never again be possible on surrounding streets.

And, of course, everyone’s rents are going up. This neighborhood is at a turning point. Will middle-class people be able to live here? Will small businesses still be able to thrive?

Those questions go far beyond the scope of the food section. But some of the new restaurants appearing around Bishop Arts give a reason for hope. Sure, there are big-budget investor-led spots like Paradiso. The new Bishop Arts institutions, though, are unpretentious little spots like Taco y Vino and the new location of Trompo.

And then there’s Krio.

In a brand-new space on a major street corner, at the bottom of a five-story residential high-rise, Krio looks like a restaurateur’s fantasy. It has floor-to-ceiling windows overlooking Zang Boulevard, an oyster bar and oysters-only chargrilling station, liquor bar and a partially covered patio. The space has so much teal paint, it can only have been designed by millennials. (I can say that because I’m a millennial too and I like it.)

The menu design is savvily calculated, too; an industry insider will notice with admiration how key ingredients turn up in different places, prepared in different ways, to reduce food costs and prep times. Food at Krio is served quickly, not because it’s fast food, but because the menu is so efficient.

But here’s the thing. Krio has soul. It’s personal and friendly and, most important, delicious. Krio owners Dan Bui (left) and Connie Cheng (right)
Alison McLean
Connie Cheng and Dan Bui use this space to serve Asian-Cajun food, including dishes that keep strictly to one of those traditions and others which blur the lines. There are fried seafood baskets, sandwiches, papaya salads and new inventions like a jambalaya egg roll.

Krio began with Cheng’s annual crawfish boil parties, and it sticks to those roots. On a center (teal) pillar in the restaurant, staff members write out the current market prices for big platters of boiled seafood by the pound and chargrilled oysters. In March, Cheng told the Observer that the restaurant was grilling a thousand Gulf oysters a week.

As good as a seafood boil sounds, I must make a confession: During the pandemic, my thoughts have turned almost entirely to sandwiches. On most visits, my own main decision is whether to get a bánh mì or a po'boy.

Filling them with fried oysters, fried shrimp, blackened cod or andouille sausage is no problem; all the options are good. The fried oysters are my personal favorite, perfectly crisp each time ($13 for either sandwich type). In early June, it was soft-shell crab season, giving the sandwiches an extra crunch ($20). What can I say? I’m a total sucker for claws hanging out of the sides of a bun.

Krio uses the same loaves for its po'boys and bánh mì: crusty but soft, and taking a backseat to the fillings, as it should. The bánh mì overflows with shredded carrots, fiery jalapeños, cilantro and a spicy sauce.

Appetizers exist along a sort of Asian-Cajun spectrum. On the Cajun side, order a creamy, superthick cup of crawfish bisque ($8). On the Asian end, there’s a delightful salad of shaved papaya and carrot in a tart, lemongrass-heavy lime dressing, refreshing on a hot summer day ($8). It’s garnished with cherry tomatoes, for balancing sweetness, and tiny crispy-fried river crabs for crunch. 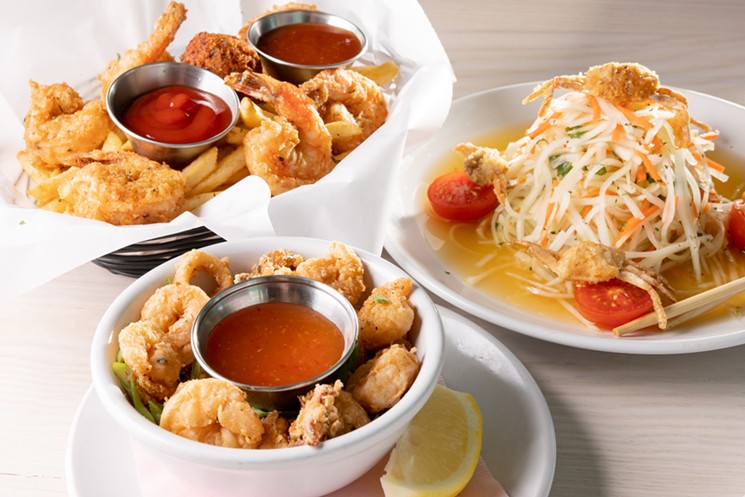 A shredded papaya salad adorned with fried crab alongside a seafood basket and calamari made with Krio's rice flour batter.
Alison McLean
On top of the shredded papaya, one crab, bigger than the rest, sits like a little fried king on his salad throne.

Straddling the Asian-Cajun split are dishes like a tall goblet of shrimp cocktail, generously filled and with a rather sweet tomatoey cocktail sauce ($10). It’s not my favorite shrimp cocktail, because the sweet sauce is underlined by a big handful of sweet cucumber, but the real twist is what comes alongside: shrimp chips. Putting shrimp on a shrimp chip? Simple, yet brilliant.

The jambalaya eggrolls are nicely fried rolls — the smaller Vietnamese kind, not the bigger, thickly wrapped variety at American Chinese restaurants — filled with a mix of chicken and rice that, by necessity, is mostly mushy ($6). I’m a much bigger fan of the calamari, fried perfectly in a rice flour batter, topped with green onions and served with a sweet chili dipping sauce in which hot pepper flakes float like little depth charges ($10).

Krio’s origins seemed cursed: It was scheduled to open right as the coronavirus arrived in Dallas, and, to make matters worse, the restaurant’s furniture order was destroyed in a warehouse fire two days before delivery. The fact that there’s anything here at all is near-miraculous.

But, more than just existing, Krio is thriving and drawing customers from across Oak Cliff. This week the restaurant celebrates its first anniversary with a New Orleans-themed bash and a performance by the Revelers Hall band.

Across all of my visits, I’ve noticed that the crowd here is one of the most diverse in Dallas: People of all ethnicities and ages come here dressed for all occasions. In this town, that’s not always a given.

And that’s a good sign for Bishop Arts, too. This beloved neighborhood has been transformed in the last few years, largely by outside forces. The changes won’t slow down after the pandemic, either. Each new high-rise brings the promise of new residents, but the peril of pushing other people out of the way. At Krio, at least, a new generation of restaurant owner is proving that a great, welcoming neighborhood spot can still be built from scratch.

Krio, 233 W. 7th St., #100. Open 4-10 p.m. Wednesday and Thursday, 4 p.m.-12 a.m. Friday, 11 a.m.-3 p.m. and 4 p.m.-12 a.m.Saturday, 11 a.m.-3 p.m. and 4-10 p.m. Sunday
KEEP THE DALLAS OBSERVER FREE... Since we started the Dallas Observer, it has been defined as the free, independent voice of Dallas, and we'd like to keep it that way. With local media under siege, it's more important than ever for us to rally support behind funding our local journalism. You can help by participating in our "I Support" program, allowing us to keep offering readers access to our incisive coverage of local news, food and culture with no paywalls.
Make a one-time donation today for as little as $1.