Trump and Pence Talk Guns at the NRA Meeting

On Friday, May 4, 2018, the NRA held a members' meeting in Dallas. President Trump and Vice President Pence spoke to the crowd of gun owners and lobbyists. The NRA's Leadership Forum, as Friday's event was officially known, began with the worst imaginable cover of "Baby Got Back" and a song about Billy Graham's Bible and Willie Nelson's guitar by a country artist Joe Nichols. Then there was a series of media-baiting videos, including NRA talking head Dana Loesch's infamous "violence of lies" piece condemning liberal media, the Pledge of Allegiance and the national anthem.

The NRA, Pence told the crowd, is lucky that Trump is in the White House.

"He told you you'd have a friend in the White House," Pence said. "I'm here as his vice president to say that you have two friends in the White House. [While we're in office,] the right of the people to keep and bear arms will not be infringed."

Trump comes to Tulsa. Is the Empire striking back?

All roads lead to Tulsa...2020 is an election year but with the Coronavirus still in bloom President Trump has been notably absent…

Marchers gathered at Belo Garden Park and peacefully made their way throughout downtown Dallas for the ninth consecutive day. Protesters are demanding…

Dallas Rallies for Solidarity in Protest

Demonstrators gathered on Friday to peacefully protest police brutality at Dallas Police Headquarters but after the sun went down, sparks flew and…

On a sunny spring afternoon, March 18, 2020, Dallas is a ghost town due to restaurant and business shutdowns from Coronavirus.  By…

Trump Rallies His Followers in Dallas

It was a night of bashing Democrats and the media at American Airlines Center on Thursday. Supporters crowded the streets at Victory…

Anti-NRA protesters gather peacefully in downtown Dallas as the NRA holds it's convention this weekend. Groups such as Code Pink, Moms Demand… 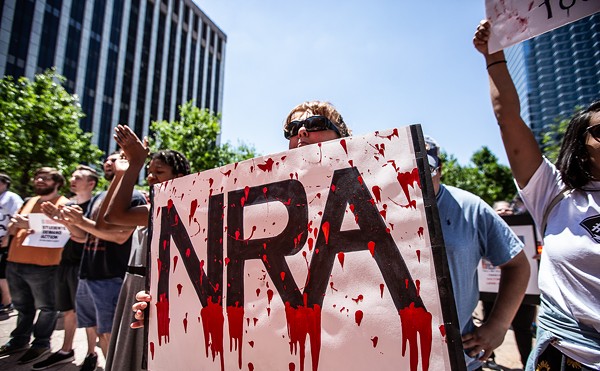