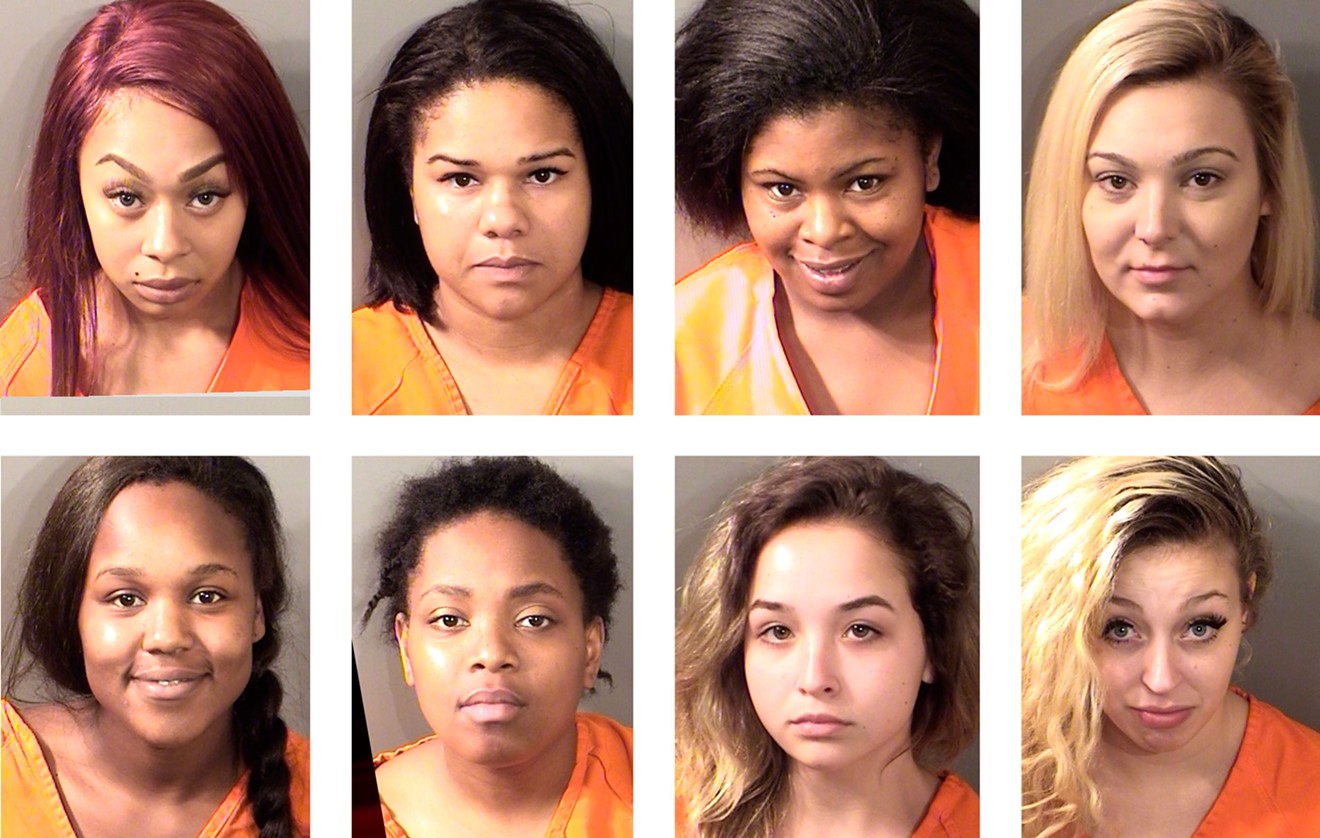 Hinojosa says the Denton County Sheriff’s Office brought in volunteers with Traffick911 to interview the women. Traffick911 is a nonprofit organization dedicated to fighting human trafficking in Texas. Its mission is to free people from sex trafficking, but the group determined that the women were complicit, Hinojosa says.

The Denton County Sheriff’s Office, the Lewisville Police Department and the Department of Homeland Security spent May 18 and May 19 in Lewisville, conducting the investigation out of what they called a “sting hotel” in the arrest warrant affidavits.

Law enforcement officials either responded to online advertisements for adult services or posted advertisements offering adult services on Backpage.com, a website that has been accused of offering a marketplace for sex traffickers. Most of those arrested discussed the terms of their services before arriving at the sting hotel, unaware that they were discussing their business terms with law enforcement officials.

Upon entering Room 207, he told the undercover officer his name, placed cash on the table and took a glass pipe from a small black bag. He was in the process of lighting the glass pipe when the officer gave the “bust” signal and officers stormed the room. They found a small, clear bag containing less than one gram of meth. They charged him with prostitution and with possession of a controlled substance.

“He wasn't hiding it,” Hinojosa says.

From left: Craig Childres, James Allen and Micah Freeman were arrested.
via Denton County Sheriff's Office
In the case of King, Homeland Security Investigations made contact with her after discovering an advertisement for adult services she posted on Backpage.com, identifying herself as “Sky.”  During the course of her conversation, King agreed to engage in sexual conduct with the Homeland Security investigator for a fee. She showed up to the sting hotel in Lewisville in a 1998 Chevrolet with a temporary tag and driven by Freeman, who may or may not have been a pimp or a bodyguard.

As soon as she entered Room 207, she identified herself as “Sky,” which matched the name used in the ad, and she was arrested for prostitution.

After she was arrested, the Denton County Sheriff’s Office's undercover deputy called King’s cellphone to check her availability. Freeman was observed answering the phone and telling the officer that she was available. He left the motel but stopped nearby. He told the the officer that he dropped a friend off at a hotel and was going to work. He was arrested for promotion of prostitution.

A couple of the women, Morris and Harden, showed up together for a “two-girl show.” Both were arrested for prostitution. Another woman, Alycia "Barbie" Red, called herself “Barbie” and showed up at the hotel with a blunt containing marijuana and a 25-milligram tablet of hydroxyzine. Others used names like “Snow,” “Journey” and “Bite Size Kayl.”

All of the suspects’ arrest situations were similar in their execution — found on Backpage.com and captured at the sting hotel — except for Allen. He was arrested in a Macy’s parking lot in the 2400 block of South Stemmons Freeway in Lewisville in reference to the human-trafficking operation, but he was arrested only for possession of drug paraphernalia. The deputy found a small quantity of marijuana from the floorboard of the 2004 Lexus that Allen was driving and some marijuana seeds in the center console.

“This won’t be the last [human-trafficking] operation that we conduct in Denton County,” Hinojosa says.