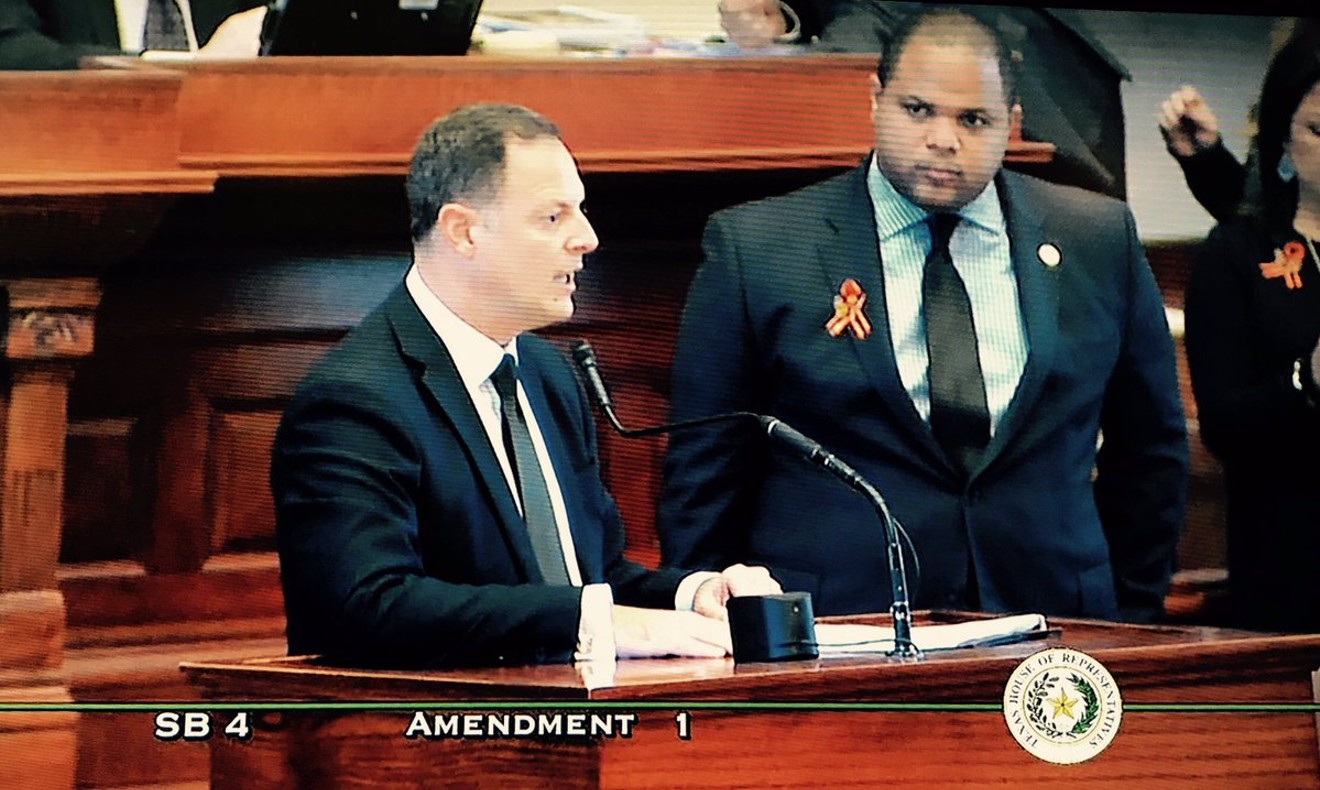 Dallas state Representatives Rafael Anchia (left) and Eric Johnson. Texas House of Represenatives
Despite vigorous opposition from much of Dallas' delegation, the Texas House of Representatives passed legislation banning so-called sanctuary cities  just after 3 a.m. Thursday. The version of the bill passed Thursday is stronger that the original House draft of the bill, more in line with the strong enforcement policies supported by Texas Governor Greg Abbott and Lieutenant Governor Dan Patrick than the compromise version of the bill that initially landed on the house floor.

As passed, Texas' sanctuary ban threatens sheriffs, constables and police chiefs that refuse to cooperate with federal immigration officials with removal from office, forces county jails to comply with detainer request from U.S. Immigration and Customs Enforcement in all circumstances and, most controversially, allows police officers to inquire about the immigration status of anyone they arrest or detain for something like a traffic stop.

The House version of SB 4 initially stripped out the last provision from the version of the bill passed by the senate, but Tyler Representative Matt Schaefer added it back in via an amendment Wednesday night. After repeated attempts from Democrats to kill the amendment via procedure — and a request from Republican Representative Charlie Geren, the bill's author, to vote the amendment down — a coalition led by the House's Freedom Caucus shoved the amendment through.


The state legislation allows police officers to inquire about the immigration status of anyone they arrest or detain.

Rep. Mary Gonzalez told the House that she believes the bill will expose undocumented Texas residents to more crime. "We aren’t exaggerating when we say the people empowered by this piece of the amendment will be criminals," Gonzalez said. "We aren't exaggerating when we say the people who will feel the biggest effects of this are the most vulnerable — the women and children who are victims of rape, sexual assault, human trafficking."

Victoria Neave, the freshman Dallas representative who's fasted since Sunday to protest the bill, told her new colleges about her father's undocumented status. She then pleaded for an amendment that would create a loophole enabling municipalities to ban local law enforcement from assisting in any immigration enforcement at domestic violence shelters. House Republicans rejected the amendment, leading Anchia to defend his fellow Dallas rep. "This is insanity," Anchia shouted.

Neave did, however, win a small concession from the overwhelming majority agreed to allow similar bans on immigration enforcement at places of worship.

Throughout the debate, Republicans were pressed to provide a reason for the bill's existence. Charlie Geren, the bill's lead sponsor in the house, couldn't give Democratic state Representative Carol Alvarado a single example of a sanctuary city in the state. While several Texas counties have loosened some immigration policies over the last two years, it is unclear whether any local government in Texas will be effected by the bill.

In late 2015, Dallas County Sheriff Lupe Valdez changed the way the Dallas County Sheriff’s Office deals with immigration hold requests from U.S. Immigration and Customs Enforcement. She ordered that her office would no longer enforce holds on Dallas County Jail inmates being held for low level crimes. Abbott threatened to withhold some state funding from Dallas County in early 2016, but never did so and the county hasn't actually turned down a request for detention from ICE. Travis County Sheriff Sally Hernandez enacted a similar policy February 1.

"We aren’t exaggerating when we say the people empowered by this piece of the amendment will be criminals." Rep. Mary Gonzalez

That moved stoked Abbott's ire, but Austin Mayor Steve Adler said Tuesday that U.S. Attorney General Jeff Sessions confirmed that neither Austin nor Travis County is considered a sanctuary municipality at a meeting held earlier this month. When Geren insisted that the bill is intended only "to go after the ones that are criminals," Anchia offered an amendment to limit the bill to enforcing ICE detainers. His colleagues voted him down.

Now that the bill has passed the Texas House, members of both of the state's legislative chambers will attempt to reconcile the House and Senate versions of the bill. After that process is over, SB 4 will head to Abbott's desk.