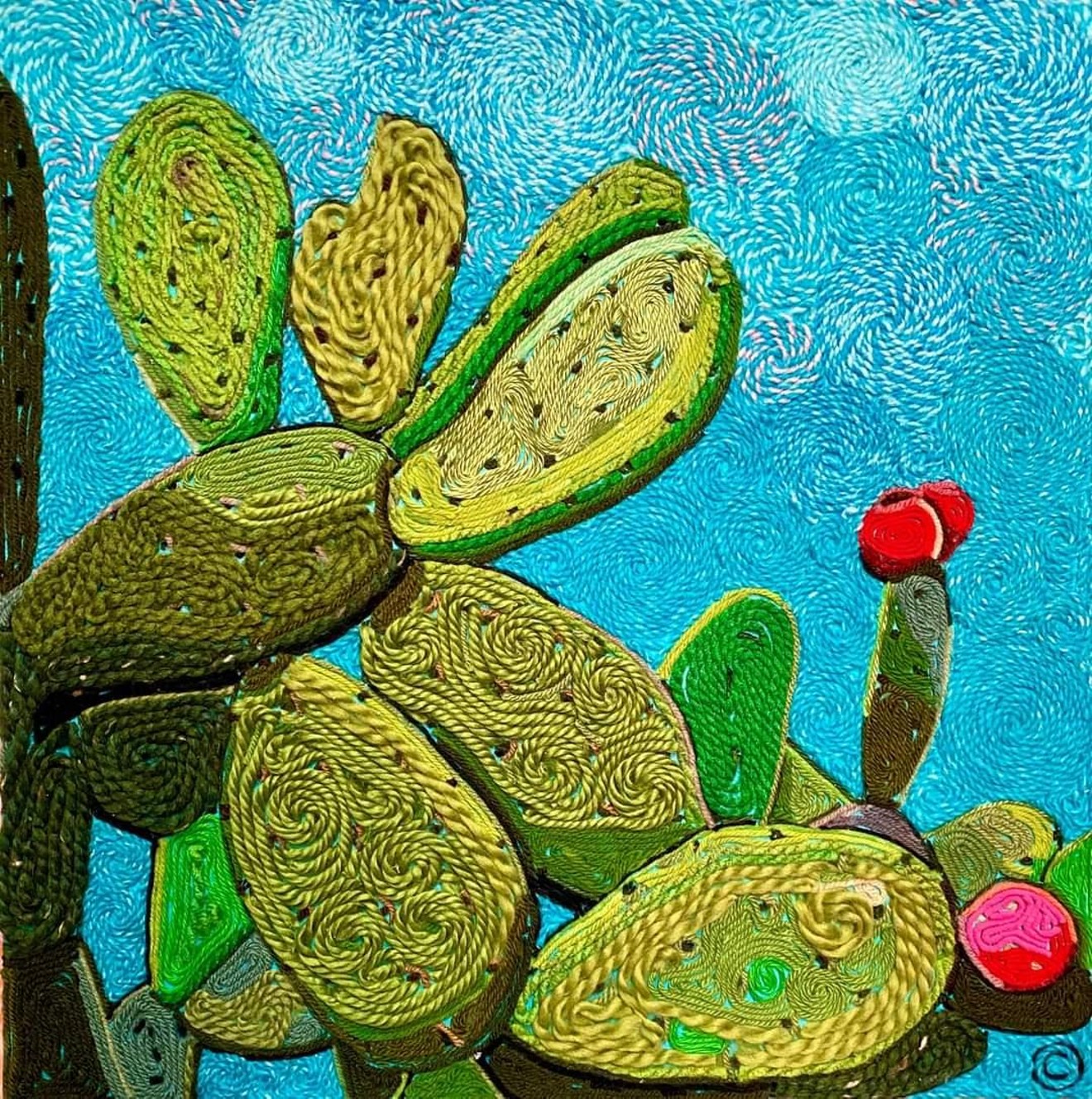 The artwork of Corey Godfrey is one by many female artists whose work will be on display for the Kettle Art Gallery's Mystique showing. Corey Godfrey

Mystique at Kettle Art Gallery
Women's representation in art still has a long way to go. The Kettle Art Gallery (2650-B Main St.) is holding a special exhibition to make sure some of the most promising female artists in Dallas get their shot through its walls. Kettle Art will celebrate National Women's Month with the premiere of its Mystique exhibition with paintings and other works from local artists Corey Godfrey, Katrina Rasmussen, Monica Daucourt, Cathy Krumholz and many more. The exhibition will run until Sunday, April 3. A special artists' reception will be held from 6-9 p.m. Wednesday, March 16.

Spring Break at the Nasher Sculpture Center
You've got the kids home from a school for a whole week. They are driving you crazy. You could just park them in front of the TV until the mind-numbing effect sends them or you into a much needed nap, or you could all get out while the weather's nice and do something more constructive. The Nasher Sculpture Center and Garden's (2001 Flora St.) annual spring break celebration includes a daily schedule of artistic activities for kids and grownups who want to sketch, color, build and paint. There's even a chance to "create your own masterpiece" with a professional guest artist. The Nasher Sculpture Center's spring break celebration runs from 11 a.m.-6 p.m. Wednesday, March 16, until Sunday, March 20. Admission is free. 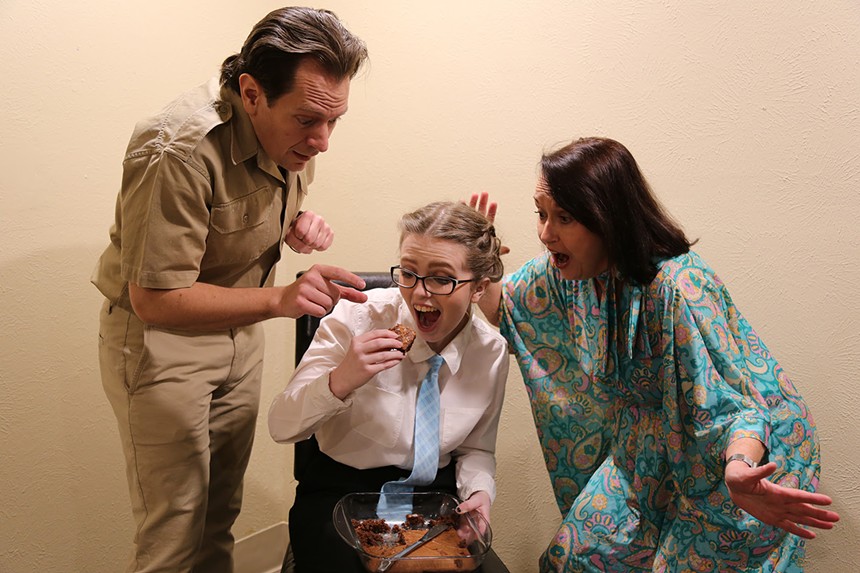 The comedy Sweet Revenge by Julie Zaffarano runs until March 26.
Courtesy of Rover Dramawerks
Sweet Revenge at Rover Dramawerks in Plano
Running a bakery may sound like a delicious way to make a living, but it can create just as many headaches as any other business opportunity. The comedy play Sweet Revenge by Julie Zaffarano shows just how high the flour can fly when you put everything on the line for your vision. Sunny and her sister Joni run a charming bakery in Spring Lake, New Jersey, that deserves more attention than it's getting, so Joni's boyfriend Brian persuades the sisters to invest in some renovations by taking out a huge loan on their family's house and entering the bakery in an online reality show contest. Things get crazier when the contest chooses Sunny and Joni's bakery for a live, weeklong broadcast. Rover Dramawerks will premiere Sweet Revenge at 8 p.m. Thursday, March 17, at the Cox Playhouse (1517 H Ave. in Downtown Plano), followed by additional performances at 8 p.m. every Thursday and Friday and at 3 and 8 p.m. Saturdays  until March 26. Tickets for the premiere night are "pay-what-you-can" with a $10 minimum at the door or online. Friday and Saturday performances are $24 and Thursday and Saturday matinees are $18 with special discounts for teachers, students and seniors.

The Greatest Generation Trilogy at The Core Theatre
Some people long for "the good ol' days" but it's easy to forget just how hard those times could be. A trilogy of plays by playwright Bill Rhoten called The Greatest Generation Trilogy looks back at one of those time periods through the eyes of the Erhard family and their small town community at The Core Theatre (518 W. Arapaho Road, Ste. 115 in Richardson). The first of the three plays opens at 8 p.m. on Thursday, March 17, with My First Date, about the family's daughter Anna and her relationship with her sailor sweetheart Caleb, as they struggle to maintain their love and patience during the rise of World War II. Tickets are $25 for adults and $15 for seniors and students. My First Date as well as the two other plays in the trilogy, Forever and Life's Little Miracles, will run until Saturday, April 9. Visit the theater's website for future dates and ticket purchases.

St. Patty's Day Party at TK's
Just because St. Patrick's Day is on a school night doesn't mean you have to stay at home and wait for the weekend to celebrate it. The live comedy venue and restaurant TK's (14854 Montfort Drive in Addison) is throwing a blowout for St. Patrick's Day. The party starts at 3 p.m. on Thursday, March 17, with a live performance by comedian and musician Pete George, a "pot o' gold" scavenger hunt for a chance at some big prizes and a special St. Paddy's Day menu of corned beef slides, Jameson Jell-O shots and green beer. Guests are required to RSVP online to reserve a table.

Sugar Sammy at the Dallas Comedy Club
Comedian Sugar Sammy has performed his edgy brand of topical humor all around the world, and now he's on his way to Deep Ellum. The Montreal native has a fearless attitude when it comes to entertaining his audience no matter where they sit on the political spectrum. To him, if he's not offending someone's sensibilities, then he's not doing his job. Sugar Sammy will perform live at the Dallas Comedy Club (3036 Elm St.) in Deep Ellum for four shows at 8 and 10 p.m. on Friday, March 18. and 6, 8 and 10 p.m. on Saturday, March 19. Both 8 p.m. shows and the 6 p.m. Saturday show are sold out. Tickets for the remaining performance can be purchased at the box office or online. Godfrey at the Addison Improv
The Chicago comedy legend Godfrey has been a standup whirlwind for more than 27 years, and he doesn't plan on slowing down any time soon. He puts his whole body into his comedy as he morphs physical and observational humor into his own unique brand of stand-up. He'll perform live at the Addison Improv comedy club (4980 Belt Line Road) starting with two shows at 7:30 and 9:45 p.m. on Friday, March 18, 7 and 9:30 p.m. on Saturday, March 19 and 7:30 p.m. on Sunday, March 20. General admission for groups starts at $40 for two people, and preferred table seating for two at $60. Each person is required to make a minimum purchase of two food or beverage items with an 18 percent service charge added to all checks. Tables can be purchased at the box office or online.

Uncolonized: A Vision in the Parallel at The MAC
Artist and sculptor Angel Cabrales of El Paso has a unique view of the world. He uses his eye for sci-fi modeling and imagery to understand and explain the history and sacrifices of Latin America. The MAC (1503 S. Ervay St.) will premiere a new exhibition of Cabrales' work with a showing of Uncolonized: A Vision in the Parallel during an opening reception from 6-9 p.m. celebrating his works that depict the untouched world of the Western hemisphere before its invasion by European colonization. The showing will run through Saturday, April 30.

El Paso artist and sculptor Angel Cabrales' newest collection of works will go on display at The MAC gallery starting on Saturday, March 19.
Courtesy of The MAC

Troma Presents #ShakespearesShitstorm with Lloyd Kaufman at the Texas Theatre
Filmmaker Lloyd Kaufman has been making movies on his own terms for more than 50 years, and he's showing no signs of stopping with his latest work of unapologetic art. #ShakespearesShitstorm is a musical retelling of William Shakespeare's The Tempest except Prospero, played by Kaufman, is a scientist who finds a cure to the opioid crisis and is exiled to the legendary land of Tromaville by the rich who can only make money if the public is hooked on their product. Prospero gets his revenge by sending a literal shit storm to his enemies' yacht and ... well, who the hell knows where it could go from there? Kaufman will be at the Texas Theatre live at 9 p.m. Saturday, March 19, for a screening and a live Q&A with the fans. Tickets are $15 each and can be purchased online or at the theater's box office.

Southwest Review Presents The Last Picture Show and This World Won't Break at The Texas Theatre
The Dallas Literary Festival and the Southwest Review literary journal will host two special screenings of two classics of Texas cinema in a special double feature at the Texas Theatre (231 W. Jefferson Blvd.) in Oak Cliff. It starts at 4 p.m. on Sunday, March 20, with a screening of the late Peter Bogdanovich's small town tragedy The Last Picture Show. At 7 p.m., catch director Josh David Jordan's This World Won't Break, closing with a live musical performance by the film's inspiration, Greg Schroeder. Both screenings are $12 per ticket and can be purchased online or at the box office.

Theatre3's "Light the Way" 60th Season Announcement Party
Theatre3, one of Dallas' most vibrant theaters, is turning 60 this year. Something that momentous requires some special performances, and the folks at Theatre3 (2688 Laclede St.) will announce the shows they have scheduled for the year at a special reception starting at 7:30 pm Monday, March 21. The event is free.

Triple Threat Tuesday at the Plano House of Comedy
Great comedians don't just come to perform in Dallas. Some of them are already here. The Plano House of Comedy (7301 Lone Star Drive) will host three local comics in one show called Triple Threat Tuesday. This rotating comedy showcase starts at 7:30 p.m. (doors open at 6:30 p.m.) on Tuesday, March 22. Tickets are $5 and can be purchased online. A one menu item minimum is required for all guests.
KEEP THE DALLAS OBSERVER FREE... Since we started the Dallas Observer, it has been defined as the free, independent voice of Dallas, and we'd like to keep it that way. With local media under siege, it's more important than ever for us to rally support behind funding our local journalism. You can help by participating in our "I Support" program, allowing us to keep offering readers access to our incisive coverage of local news, food and culture with no paywalls.
Make a one-time donation today for as little as $1.