Comedian and Backdoor Comedy Club co-owner Linda Stogner performs stand-up at her Richardson club, one of North Texas' longest operating comedy theaters. Jan Norton
Comedy clubs are in uncharted territory thanks to the coronavirus pandemic. Places that once attracted sold-out crowds are having to cut their audience limits in half or close altogether.

The Backdoor Comedy Club is a little more familiar with the struggle to stay open. It has opened and closed 12 times since 1988 in spaces with stages all over the city — including a pizzeria, a deli, a hotel bar and a bowling alley.

"We're like the Energizer bunny," says Jan Norton, co-founder and co-owner of Backdoor with comedian Linda Stogner. "We keep going because it was always about the comedy. We weren't trying to lose money."

"But we did lose money," Stogner adds with a laugh. "It was about comedy, and we wanted to share that."

The latest location is in a Richardson strip of stores and restaurants located in an open space in The Line Public House. The Belt Line Road spot still has weekly shows and showcases even as the pandemic leads to smaller audiences.

"At one time, it was open as a disco," Norton says. "It was called the Cuckoo's Nest or something. Nothing else was going on in that room. Backdoor Comedy was the only thing going on. We're in our own little, separate room, like a New York club. It's very intimate."

Backdoor is an anomaly in any local comedy scene. It relies primarily on local talent, who get on the list for Thursday's open mic shows and Friday's and Saturday's "Best Of" showcases. National touring comedians are regularly on the list, but it's the local talent who fuels the venue's content and support — even their fellow comics' sets and talent. "The stakes are low," says comedian Aaron Aryanpur, who first performed a set at Backdoor in 2002 when the venue was stationed in the Shady Side Café and Tavern in downtown Dallas. "Nobody's there from 'the industry' who's scouting anybody unless it's a special event. They want you to do so well to make it harder for the next person to make sure their material works. Maybe not everybody, but there's maybe three or four people you really trust who know what works best for you and you can say, 'Hey, do you mind sitting in and watching this? I've got maybe 80% of it that works.' That feedback is invaluable."

Backdoor came to be during what Stogner calls "the caveman days" in 1988, so she and Norton could have a place to practice and perform their comedy.

"We wanted to get more stage time," Stogner adds. "It was very limited. You'd go up one week, and it might be a month before you go up again."

Their first comedy club started in the Medallion Center along Northwest Highway next to Repo's Pizza and a movie theater and billed itself as Repo's Comedy in honor of its roommate. The venue held shows three to four days per week for a $2 cover charge. It gave local comedians a place to perform and hone their material and even attracted national names who performed at bigger clubs to do surprise late-night shows, including David Spade, Brian Regan and Kathleen Madigan.

"There really wasn't a local scene at all," Stogner says. "We played a part in giving birth to that."

The venue got its name when it moved to Philachi's Deli on Walnut Hill Lane and Northwest Highway. Stogner says they started calling their venue Backdoor Comedy Club because guests and comics had to enter the venue through the backdoor; the front door was located right next to the stage.

"We've since learned to regret that name because of the connotation," Stogner says.

"I've had people calling and going, 'Are there any other gay comedy clubs?'" Norton adds.

The club's popularity among audiences and comedians grew along with Dallas' burgeoning comedy scene. Backdoor gave future comedy stars some of their first shots at stage time, such as Cristella Alonzo, Tone Bell, Dustin Ybarra, Four Day Weekend founder David Ahearn and Johnny Hardwick, who went on to write and voice Dale Gribble for the Mike Judge sitcom King of the Hill.

"We've never had a shortage of comics," Stogner says. "When people like [Paul Varghese] are not working, they'll come up and bring some people from out of town. We had the writers from Conan go up and headliners who stop in, people looking for a real place to perform. We also make room for new people because we want to grow them." 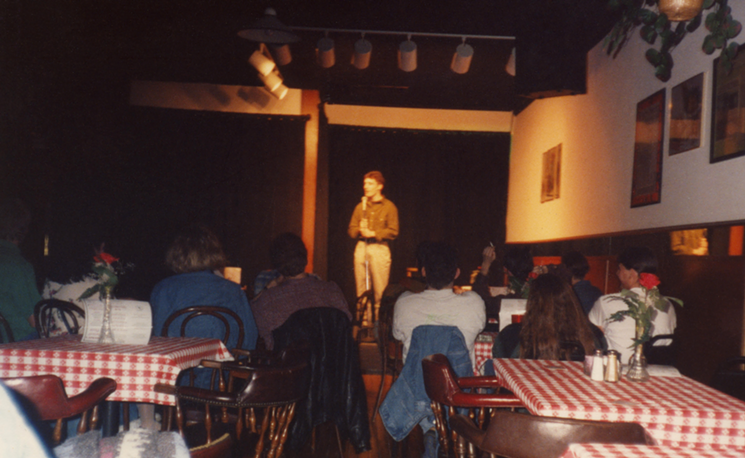 Comedian and Four Day Weekend co-founder David Ahearn performs a set in the early 1990s at the Backdoor Comedy Club.
Linda Stogner
Backdoor has become a proving ground for Dallas comedians because of its focus on developing local talent.

"Backdoor, for those who don't know to a lot of open mic-ers' dismay ... they insist on clean," Aryanpur says. "They want to keep cursing to a minimum. ... They'd rather you be suggestive than gross, and for a number of comedians, it helps you write cleaner material. Backdoor fostered a certain attitude towards writing that helped a lot of people not just generate material but generate material that gets you booked."

It's also become a place for memorable moments and milestones in comics' lives, such as actor and comedian Zach Rose of Albuquerque, New Mexico, who not only got bookings and an agent because of Backdoor, but he also proposed to his wife on Backdoor's stage.

"I have so much I owe them and so much gratitude to them for that," Rose says. "Comics talk about having a home club, and Backdoor has always been like going back home for Thanksgiving. Linda and Jan always understood me and allowed me to do my own thing. There's no expectations of formula."

Backdoor had to sit out on shows since the end of March because of the COVID-19 outbreak and only started holding public shows to half of their previous audience in September, but Stogner and Norton say they're more motivated than ever to stay in operation.

"Honestly, I think it's the love of comedy, and we're comics, too," Stogner says. "We're comics first, and we're just providing a place for people to perform."

"We have a love and respect for the craft and the art," Norton adds. "It's more than just funny guys standing up in front of a bunch of drunks."
KEEP THE DALLAS OBSERVER FREE... Since we started the Dallas Observer, it has been defined as the free, independent voice of Dallas, and we'd like to keep it that way. With local media under siege, it's more important than ever for us to rally support behind funding our local journalism. You can help by participating in our "I Support" program, allowing us to keep offering readers access to our incisive coverage of local news, food and culture with no paywalls.
Make a one-time donation today for as little as $1.