AshleyMadison.com reports that Dallas has many men and women seeking partnerships outside of marriage. Kathy Tran
Ruben Buell speaks quietly. Maybe he isn’t used to media attention, but that's unlikely. Maybe this president of a major company is just soft-spoken. Perhaps Buell doesn’t want to alert everyone in this Starbucks in Grapevine that he’s the president of Ashley Madison.

Yeah, that could be it.

Although he talks softly, Buell is confident as he tries to convince his listener that ashleymadison.com, a dating site marketed to spouses looking to cheat, isn’t as bad as some in the media have portrayed it. It’s not breaking up marriages and families, he says; divorce does that. Wouldn’t it be better if one of those spouses cheated and learned what they needed out of a marriage instead of just giving up and filing for divorce?

Adultery as a learning exercise. Cheating to save a marriage. Put aside questions about ethics, morality, honesty and emotional damage, and that can make a narrow sort of sense.

“I've lived long enough to know that life is not always the fairy tale,” says Buell, president and chief technology officer of ruby Inc., Ashley Madison’s parent company. “There are a lot of different scenarios out there. When people use our service, sometimes they use it without their spouse, and sometimes they use it with their spouse. Sometimes both of the individuals are on the service.

“When you take the job, it seems very black and white. It's, OK, you agree with that or you do not agree with that, and then once you're on, you see all the shades of gray that exist within society and within humanity.”


"You see all the shades of gray that exist within society and within humanity.” – Ruben Buell

Deeper shades of red — on the faces of the website's users — put the site in the media spotlight in 2015, when hackers stole personal information from millions of Ashley Madison users. Politically conservative reality TV star Josh Duggar, one of the cast members of 19 Kids and Counting, was outed for using the site. A few users killed themselves, purportedly for fear of being revealed by the hack.

Ashley Madison, founded in 2002 with the slogan, "Life is short. Have an affair," had prided itself on discretion.The hack led to a shake-up in management that resulted in Buell's hiring. Ashley Madison has hung on, though, signing up new members and refocusing on security.  Earlier this month, Ashley Madison released a list of the 10 U.S. cities with the highest number of users. Dallas came in No. 3, and for every man on the site, there were 1.05 local women. Buell told the Observer then that Dallas women have "backbone," which leads them online to search for affairs.

At a follow-up interview last week, Buell wore a baby-blue blazer and trendy tennis shoes. His black goatee had specs of white in it. He spoke with the Observer the day after his 44th birthday, and the next day he was jetting off for a vacation with his wife, whom he met working at his previous online dating job. They planned to leave their five sons, ages 14-20, at home. 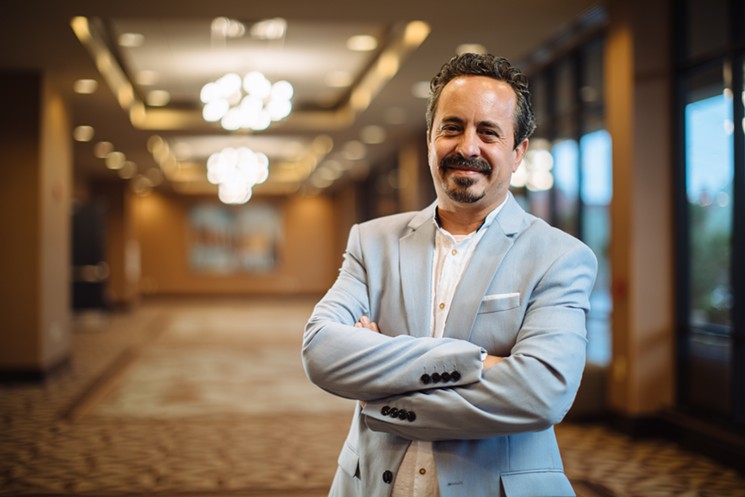 Ruben Buell is the president of AshleyMadison.com
Kathy Tran
Buell mentions the book The Secret Lives of the Cheating Wife, about women who “stray to stay,” seeking sexual fulfillment they're not getting in their marriages. They start to resent their husbands, but when their desires are met, they go back to their marriages refreshed and re-energized.

“If you're going to get divorced, divorce because the two aren't compatible anymore, not because maybe one of them decided to stray for a while,” Buell says. “Society rewards people for wanting a divorce but then is so harsh on infidelity.”

While Buell says he endorses his company's product, he and his wife don’t use ashleymadison.com. But he says they “try to be really, really open about it.” Although he believes the site can help a marriage, he doesn’t think it would have helped his first marriage.

“My first marriage was one that was right out of high school, so I always say we broke up once after dating for six months,” he says. “That’s the exact same reason we got a divorce 10 years later.”

In addition to Ashley Madison, ruby Inc. is the parent company of dating sites Cougar Life and Established Men. Buell was president of True, another dating site that folded in 2014, before ruby Inc. recruited him.

Buell comes from a big Bedford family and has five brothers and two sisters. His parents divorced when he was 5, and he attended Berklee College of Music in Boston before transferring to the University of Texas at Arlington, where he continued to study music. After college, he started a software firm.

Today, he spends roughly three weekends per month in his Southlake home — the other days, he’s at ruby Inc.'s headquarters in Toronto. His days are like any other company executive’s day, he says. There are revenue meetings, product meetings, technology meetings. About half of the firm in Toronto is ruby Inc.'s IT organization, development group and programmers.

There's no underground grotto with women swimming nude, Buell insists, and there's no hate mail. He says the ruby Inc. headquarters never gets hate mail, nor does his DFW home. He believes the parents of his sons’ friends are cool with him and his job. Strangers at a party? They’re just really curious.

“Usually, the first response is a pretty big smile, like an ‘Oh, really?’ Then there's a couple of different things. The biggest response is curiosity. ... People have the impression that it's the Playboy Mansion. We have a grotto there somewhere, or it's a big bunch of guys doing whatever. They don't think of it as a very diverse, high-tech company out of Toronto that operates with some of the best diversity I've seen in a firm.”

After the infamous hack, ruby Inc. went through several changes to rebrand itself and build trust with its consumers. First the media-savvy Noel Biderman stepped down as CEO, and Rob Segal took over. Then the company changed its name from Avid Life Media. Then the company moved offices, and finally, a headhunter recruited Buell from True, the dating site Buell was president of for 10 years.

Security would be tighter. From the receptionist to the developers, everyone’s first priority would be security and privacy. The company even hired HackerOne, a hacker-powered security platform, to explore ashleymadison.com to find its flaws and vulnerabilities.

"No technology is immune to security vulnerabilities," Alex Rice, HackerOne CTO and co-founder, writes in an email. "The most mature organizations are quickly realizing that inviting friendly hackers to collaborate with them on security is one of the best ways to reduce the risk of a security incident. Thanks to the efforts of hundreds of those friendly hackers, ruby Inc. users are absolutely more secure than they were in 2015."

Buell says before the hack in 2015, Ashley Madison was more focused on marketing and getting its name out.

"Noel was the CEO at the time," Buell says. "He was very good at marketing, very creative because of controversy and the king of infidelity. But the focus wasn't necessarily as much on product and technology as it needed to be. And so some of those items were just overlooked a little bit ... and [it] wound up with everything that happened, which for a firm like Ashley Madison was devastating. That is our core product — discretion.


"That is our core product — discretion." – Ruben Buell

A group calling itself The Impact Team was responsible for the 2015 hack on Ashley Madison. In an email interview with Vice, The Impact Team said the security on the site was bad. 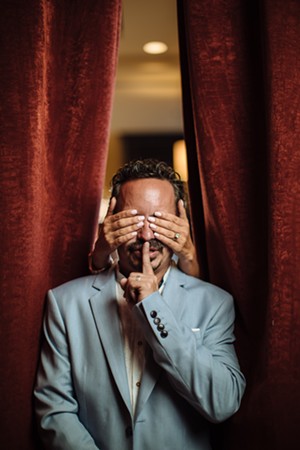 Ruben Buell says that cheating and adultery are a learning exercise that can sometimes save a marriage.
Kathy Tran
"We were in Avid Life Media a long time to understand and get everything," The Impact Team wrote to Vice in 2015. "Finally we watched Ashley Madison signups growing and human trafficking on the sites. Everyone is saying 37 million! Blackmail users! We didn't blackmail users. Avid Life Media blackmailed them. But any hacking team could have. We did it to stop the next 60 million. Avid Life Media is like a drug dealer abusing addicts."

“I do think that Ashley Madison has to be very careful,” Buell says. “A lot of big brands are targets, and Ashley Madison's a very large brand. Obviously, with the business growing and our business being discretion, we have to be more careful.

“I talk a lot about the fact that we have to be more careful than financial institutions. If your credit card number is taken, that's a real inconvenience, right, because you have to call your bank and swap out things. But if your name gets revealed while you're having an affair, it can change your life.”


"If your credit card number is taken, that's a real inconvenience. ... But if your name gets revealed while you're having an affair, it can change your life.” – Ruben Buell

Although Buell says he feels the pressure, he doesn’t show it during his chat with the Observer. He says as president of the company, he’s always on the clock, but as he sits in the Starbucks lounge chair, he never checks his phone as he casually sips his juice, continuing to speak quietly as if he’s always practicing the discretion his company preaches.

He tells a story about meeting a woman on a plane. As the woman was clutching her rosary, he explains, the two swapped stories about what they did for a living. It could be the beginning scene of a bad rom-com — the president of an adulterous dating site and a woman holding a rosary meet on a plane.

Buell ends the story with a nice bow on top — like how preachers do every Sunday, when their stories are somehow perfect metaphors for the week’s sermon, and everyone comes away with a nice lesson.

“I could tell as we started talking she seemed very anxious or nervous, and we talked about the people and what the experience of the users are and different things, and you could just see while she didn't agree with perhaps the ethics or the site in general, that she could certainly see where individuals wind up in their lives and where they wind up where they need a service like Ashley Madison, or where Ashley Madison plays a part,” Buell says. “I just remember at the end of that flight, she just thanked me for a great conversation and that she had learned a ton.”
KEEP THE DALLAS OBSERVER FREE... Since we started the Dallas Observer, it has been defined as the free, independent voice of Dallas, and we'd like to keep it that way. With local media under siege, it's more important than ever for us to rally support behind funding our local journalism. You can help by participating in our "I Support" program, allowing us to keep offering readers access to our incisive coverage of local news, food and culture with no paywalls.
Make a one-time donation today for as little as $1.