This Canceled Theater Season, Satisfy Your Bard-y Appetite With the Best Shakespeare Movies 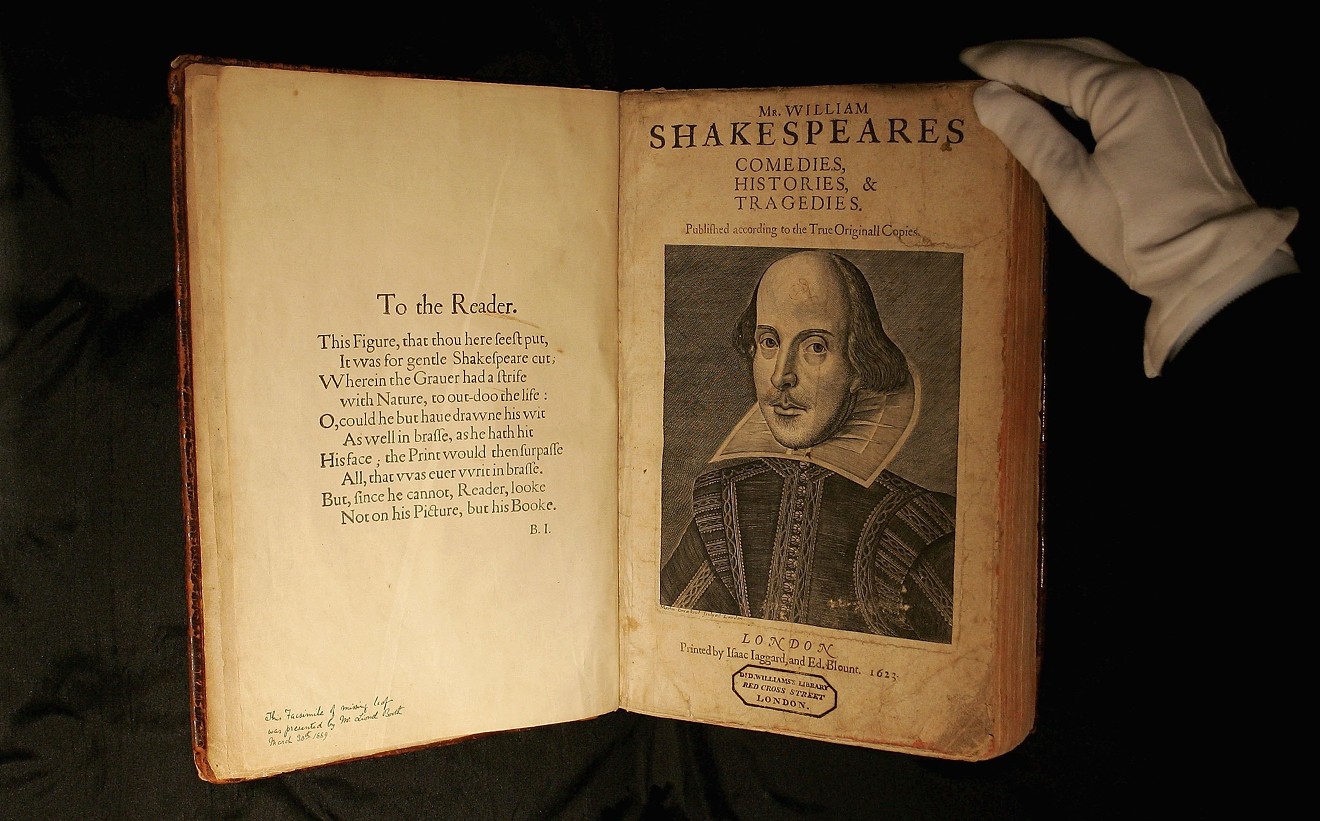 To watch or not to watch? No question. These are the best film adaptations of Shakespeare's plays. Scott Barbour/Getty
Shakespeare Dallas, a staple in the DFW community for decades, would normally be in the heart of its summer season right now. Unfortunately, the 49th season of Dallas’ Shakespeare in the Park was canceled because of COVID-19. Luckily, there are some options at home to help fill the void. While nothing can quite replace the experience of seeing Shakespeare live in a beautiful park on a lovely midsummer evening, consider setting up a picnic blanket in your living room and exploring some of the great Shakespeare film adaptations. Here are some of our favorite film versions of the Bard’s finest works to tide you over until Shakespeare Dallas returns:

Richard III (1995)
Amazon Prime
Shakespeare’s worlds are pliable, unstuck in the time and place they were originally conceived. As such, artists have great freedom when deciding how and where to set his work, and the effect is twofold: It can shed new light on both the text and the chosen setting. The great 1995 film version of Richard III, starring Sir Ian McKellen, is a good example. Much of the original dialogue is intact, but the setting is updated to an alternate English timeline in the 1930s. "A horse, a horse, my kingdom for a horse!" Richard still cries, though this time he’s in an army jeep stuck in the mud. The alternate timeline has clear correlations to fascism and Nazi Germany, and the effect is eerie and urgent: No matter where or how we look at history, something sinister can lurk behind the veil of power and authority.

Much Ado About Nothing (1993)
Vudu
Much Ado About Nothing might be Shakespeare’s funniest and most joyous play. Kenneth Branagh's 1993 adaptation does justice to these attributes in spades; it’s nearly impossible not to leave it without a massive grin on your face. Set in the Italian countryside, the story depicts various lovers and the machinations and schemes by their friends and enemies to bring them together and tear them apart. Branagh and then-wife Emma Thompson share exquisite and hilarious screen chemistry as Shakespeare’s wittiest lovers ever. The impressive cast is rounded out by Denzel Washington, Keanu Reeves, Michael Keaton and a very young Kate Beckinsale in her film debut.

The Merchant of Venice (2004)
HBO Now
Al Pacino is both a subtle actor and one of the great scenery-chewers of our time, which makes him the perfect casting choice to play Shylock in this 2004 film version of The Merchant of Venice. Directed by Michael Radford, the film is clearly sympathetic toward Shakespeare’s controversial money lender who demands a literal pound of flesh if a particular Christian does not satisfy a loan. Shylock is presented as a misunderstood outcast whose circumstances have turned his heart cold and cruel. Pacino revels in some of the Shylock’s angry monologues, but we also get quieter moments where the camera simply fixates on his weariness. This is where cinema can greatly enhance Shakespeare; we see the eyes and the contours of the face, which augment the character and allows us to see them in a more nuanced light.

Macbeth (2015)
Amazon Prime
Unlike Richard III, which details how a person might rise to power, Macbeth considers the effects on the psyche when that power is obtained. Justin Kurzel directs the film with a fittingly dreamlike and fractured style, which amplifies just how strange and unnatural Macbeth’s rise and fall really is. Yet Kurzel knows style alone cannot carry this story. The meat of the play is in the exchanges between Lady Macbeth and her subservient husband, and Kurzel wisely tones down his cinematic flourishes during these moments. And it’s here that we simply observe in quiet awe as the great Michael Fassbender and Marion Cotillard (a dream casting choice if there ever was one) bring this unsettling and tragic marriage to invigorating life.

Hamlet (1996)
Amazon
While cinema offers a great chance for filmmakers to get creative with their interpretation of Shakespeare, some of his plays achieve such perfection that to stray from them would seem almost pointless. So it doesn’t come as a major shock that Kenneth Branagh’s 1996 version of Hamlet fully embraces the text and omits not one line. As such, the movie is long at 242 minutes, and yet because this material is so complex and entertaining, and because Branagh and his team infuse the film with copious visual splendor, it never feels like a slog. It’s a Shakespeare film to sink into and wallow in its endless pleasures. “To be, or not to be. That is the question,” Hamlet muses to himself. To watch or not to watch? That is hardly a question.

King Lear (2019)
Amazon Prime
The role of King Lear is so revered that sometimes when an actor lands a highly sought-after role in general, they will refer to it as their Lear. It makes sense then that when an actor lands the actual role of King Lear, the stakes are high. To see Sir Anthony Hopkins in the role seems like a monumental event, and Hopkins doesn’t disappoint. He balances the ruthlessness, comedic insanity and underlying sorrow of Lear with great care and verbal dexterity. Hopkins played Lear on stage in 1986, but he was too young for the part then. It almost seems like that was practice for this. As a side note, much has been made of the fact that Shakespeare wrote Lear while quarantined during the bubonic plague. So if you’ve never seen Lear, now’s as good a time as ever to experience its wonder, horror and might.

Coriolanus (2011)
Youtube
Most often we experience Shakespeare through his "greatest hits," so to speak. We see or read Hamlet, Lear and Macbeth time and time again, and for good reason. But there are many unsung plays in the Bard’s extensive list of works that also deserve our attention. Coriolanus is one such play. This might be the closest any Shakespeare adaptation has come to being an action movie, and yet for all its visceral impact and mayhem, it’s also concerned with big questions about a leader’s relationship to his people and the fragile and malleable nature of trust among groups and individuals. It’s a taut and muscular bit of filmmaking that’s been put together with obvious care and affection by director Ralph Fiennes, who also stars as the titular Roman general who wars against his own people.

Twelfth Night (1996)
Amazon
If you go to Shakespeare for the elaborate plots, confusions, disguises and jovial trickery, then you ought to check out Twelfth Night, if you haven’t already. This 1996 adaptation from Royal Shakespeare Company veteran Trevor Nunn updates the setting to the late 19th century, but keeps the basic story intact, which we’ll reveal nothing of here. More than any other Shakespeare play, this one is best experienced with no prior knowledge of its labyrinthine plot. It’s a tricky story to pull off, but Nunn knows Shakespeare, and his cast, including Helena Bonham Carter, Richard E. Grant and Ben Kingsley, are completely at home with the challenging rhythms of the dialogue.
KEEP THE DALLAS OBSERVER FREE... Since we started the Dallas Observer, it has been defined as the free, independent voice of Dallas, and we'd like to keep it that way. With local media under siege, it's more important than ever for us to rally support behind funding our local journalism. You can help by participating in our "I Support" program, allowing us to keep offering readers access to our incisive coverage of local news, food and culture with no paywalls.
Make a one-time donation today for as little as $1.