Dallas' 10 Most Expensive Apartment Complexes You Can Move Into Today 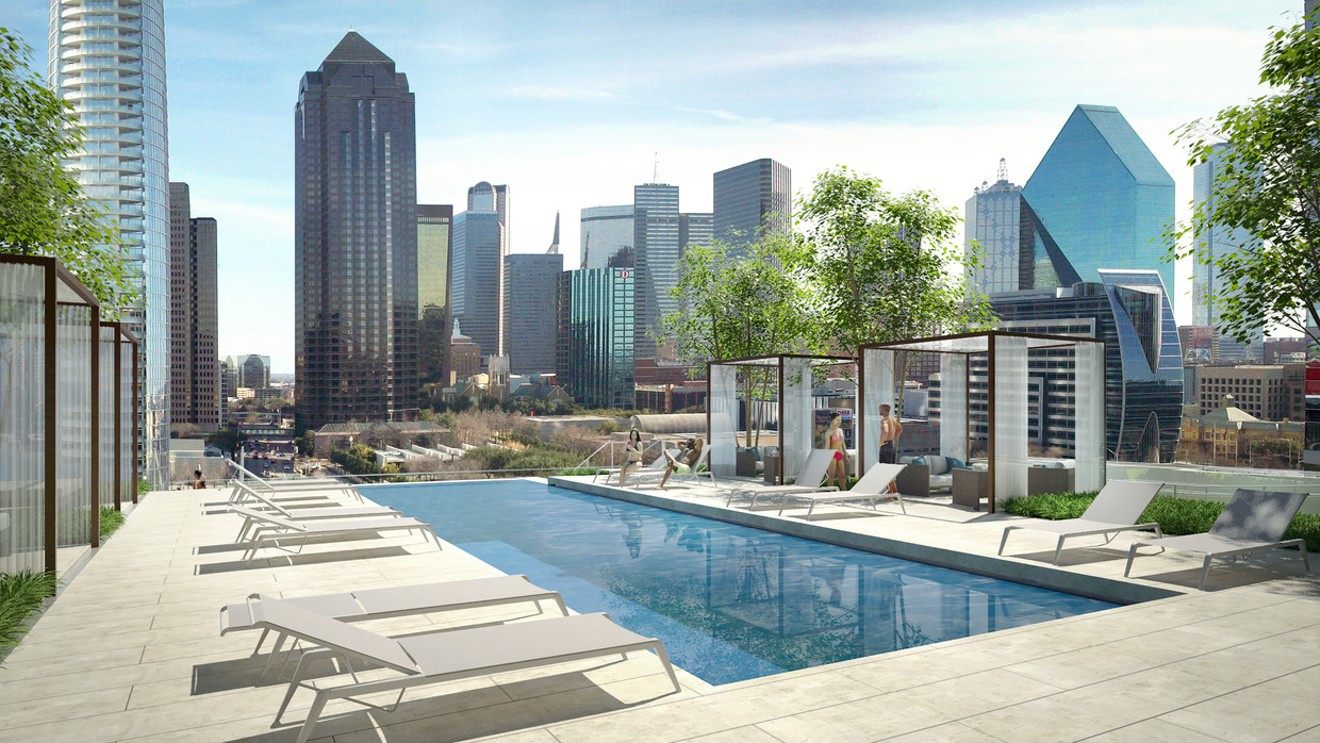 The second most expensive spot on our list, in the heart of the city. apartments.com
Rent prices in Dallas are known to skew high. The August 2018 National Apartment List Rent Report shows Dallas has a median rent of $894 for a one-bedroom apartment. While that’s nowhere near as high as rents get in the suburbs, the near constant rise of new developments such as the 400-unit tower at 2000 Ross Ave. has done much to add high-priced square footage to the local apartment market.

“I mean prices are just ridiculous,” says Kara Zielinski, a local realtor and agent for The Locators Real Estate Brokerage. “If I was to pinpoint it to a neighborhood, I would say Uptown proper and then also the Arts District for sure, and those are like $2,500 [a month] easy. It’s crazy.”

There are a few other Dallas neighborhoods where the rents pack just as pricey punch, and we’ve rounded up some of the heaviest hitters. To make things simple, given that most apartment prices vary from unit to unit and even day to day, we’re basing our list on each apartment complex’s one-bedroom prices, not including studios. The numbers are subject to change and sourced from the complexes’ websites and apartments.com. So, in order, from the least to the most unaffordable, here are 10 of Dallas’ most expensive apartment complexes with vacancies to spare: 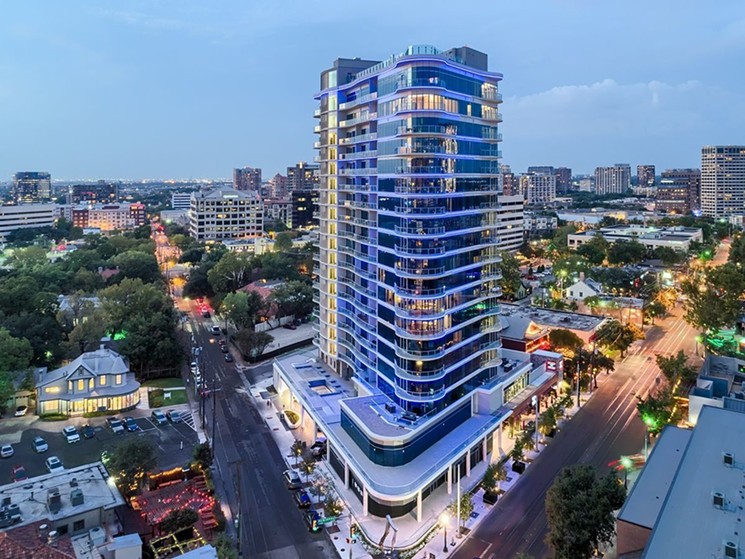 Prices at One Uptown have fallen, just not where the penthouses are concerned.
apartments.com
1 Bedroom $1,599 – $4,950
It's our first Uptown entry to make the list but certainly not the last. At one point rent for a 571-square-foot entry-level unit ran for as high as $1,805. With the recent slump in rent price, $1,600 per month will get you in the building. Not surprisingly the top floor has done a better job of retaining its value. The two one-bedroom penthouses still available both go for well over $4,000 per month. Completely decked out with top-of-the-line appliances and fixtures, One Uptown’s penthouses have enough quality to warrant the arm and leg they’re asking for.

The Renaissance at Preston Hollow 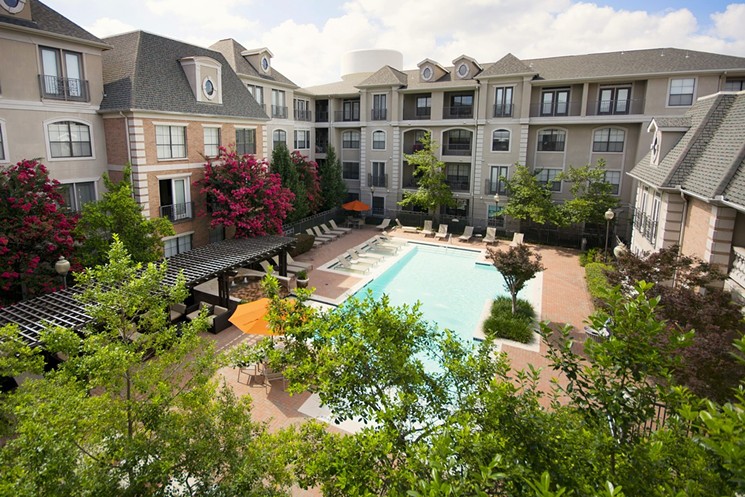 The Renaissance's amenities are a bit underwhelming compared with the rest of the list, but it makes up for it in its location.
apartments.com
1 Bedroom $1,662 – $2,012
Located on the southern edge of the neighborhood, The Renaissance is less than a block away from NorthPark Center. A one-bedroom spot will run you up to $2,000 per month for just less than 1,000 square feet. Some models include granite countertops, private balconies and maple or cherry wood cabinets, while other expected amenities such as a “state-of-the-art” fitness center or the complex’s two resort-style pools help make up for the price tag. But compared with some of the other entries on the list, The Renaissance merely dents the bank. 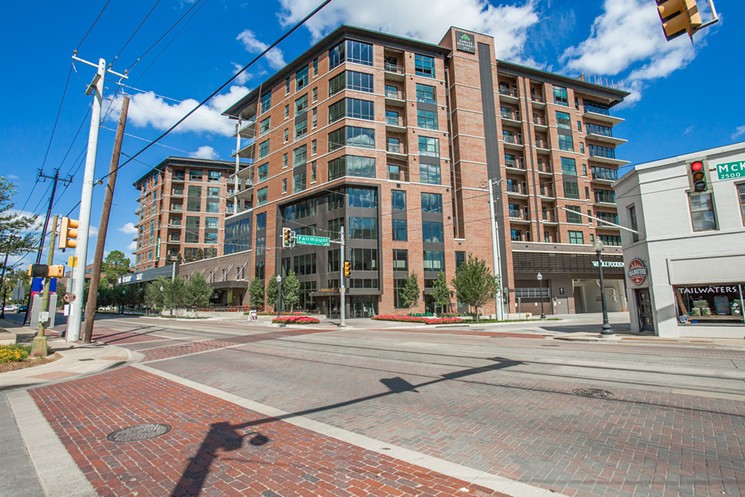 The Gables' many green-leaning features and practices make this place perfect for the environmentally conscious apartment shopper with plenty of cash to burn.
apartments.com
1 Bedroom $1,860 – $3,583
The Gables is perhaps one of the most modern of the complexes to make the list. Residents get access to a theater room, virtual fitness instructors and charging stations for electric vehicles.The Gables has been fitted with energy- and water-saving appliances and fixtures from top to bottom. And their 600-square-foot entry-level units won’t leave much room for an overlarge carbon footprint. No word yet on whether the units facing the Dallas Business Journal’s building have paywalls over the windows.

The Katy at Victory Park 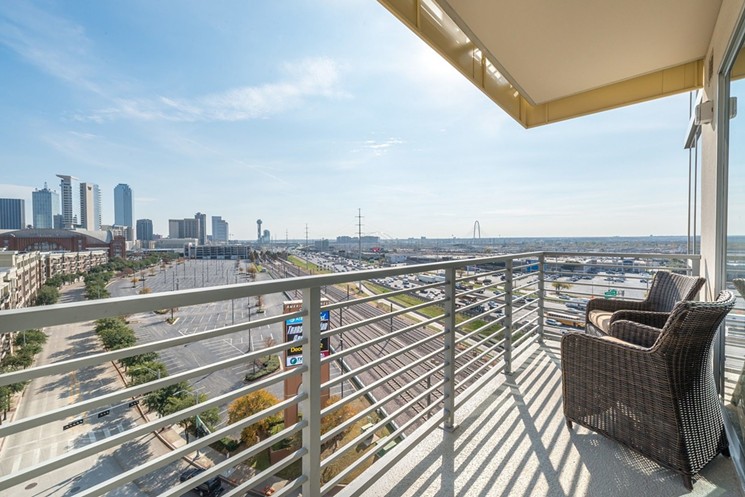 While most complexes on this list include amenities for pets, The Katy makes a point of treating your furry companions as family, or at least rent-paying roommates.
apartments.com
1 Bedroom $1,865 – $3,245
Billed as a “pet-friendly apartment community,” the fine folks running the Design District high-rise go as far as to charge your four-legged friends rent. Its one-bedroom units start at just a little more than $1,800, and at 670 square feet, they'll have you feeling closer to your pets. What they lack in size, they make up for in style and amenities, like in-house pet grooming and a rooftop dog park, which should at least take some of the hassle out of pet ownership. 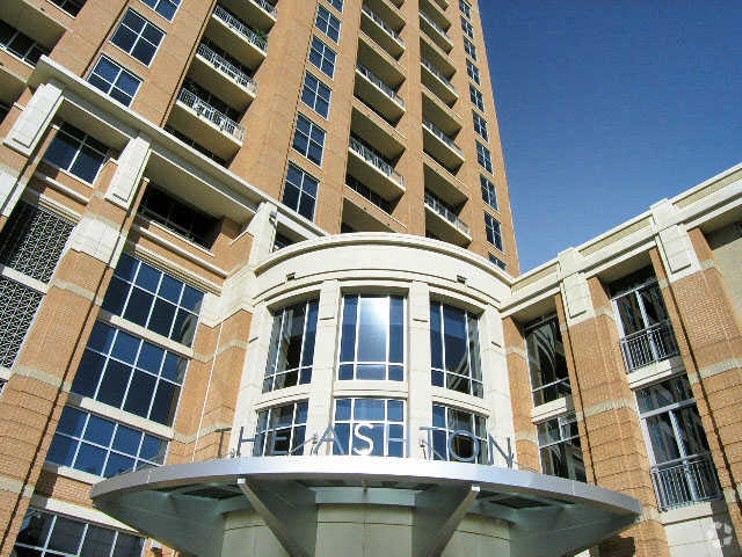 Living at The Ashton feels more like joining an exclusive club than it does moving into an apartment.
apartments.com
1 Bedroom $1,878 – $3,759
While some luxury apartment complexes may be a bit more austere in their presentation, this complex is much more bombastic. Designed to feel more like a luxury hotel than a luxury apartment, The Ashton’s amenities are near overwhelming. Residents get access to more than 200 private clubs across the country, including Canyon Creek Country Club and Gleneagles Country Club. Monthly events, like cooking classes and comedy nights, as well as personal concierge and valet service, are included. What’s more, a baseline unit runs slightly larger, starting at just over 900 square feet. All things considered, this place is downright affordable. 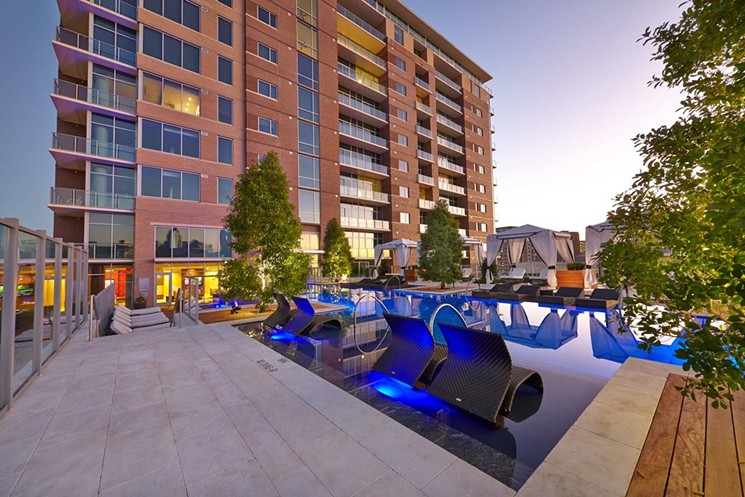 The Brady comes with rave reviews from residents both past and present, but its biggest draw is its location.
apartments.com
1 Bedroom $1,964 – $3,809
Many have called the Brady one of Dallas’ best luxury high-rises. Combining the pet-friendly attitude of The Katy with all the same luxury fixtures one would expect from the neighborhood, this complex sits right along the Katy Trail. Hopefully the amenities and all that access will make up for the 655 square feet that two grand per month gets you. As it stands, the building’s location seems to be its biggest differentiating trait when compared with nearby complexes. 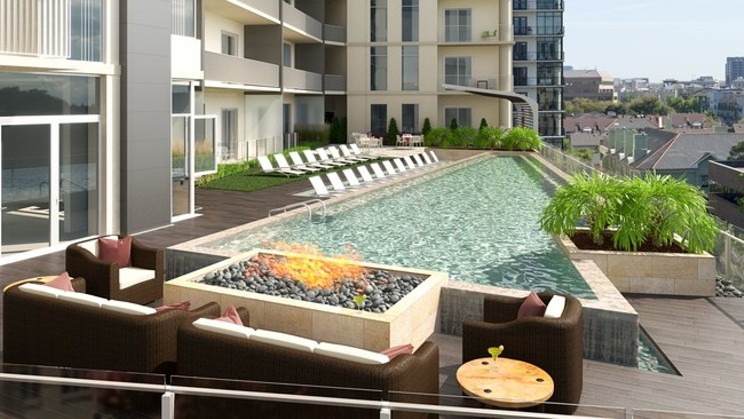 Carlisle & Vine hasn't even officially opened yet but already makes the list as one of Dallas' most expensive spots to live.
apartments.com
1 Bedroom $2,275 – $9,525
One of the newest high-rises to stretch out over Dallas, its 159 units have only recently been up for lease. Scheduled to open this November, the tower is shaping up to be one of the most luxurious properties on the block. The higher end of the price range is reserved for impressive penthouse suites, like the 1,800-square-foot one-bedroom, one-and-a-half bath Penthouse Seven. Their lowest-priced one-bedroom units are around a third of that size. But the combined appeal of a brand new building and a lengthy list of luxury frills (a year of Amazon Prime, pet spa, 24-hour concierge service, etc.) definitely bolster this property.

Melding modern appeal with rustic charm, Ascent Victory Park may come off a bit too anachronistic for some.
apartments.com
1 Bedroom $2,278 – $3,037
While Victory Park has certainly not always been known as a residential hotspot, this building is one of the exceptions. Located at the southern end of the Katy Trail, residents of the Ascent are living in the thickest part of the city. Surrounded by some of Dallas’ most up-and-coming neighborhoods and marked with an elevated yet rustic design, it’s no wonder their smallest available units are able to command top-dollar rents. Some notable amenities like a professional golf simulator and a room dedicated to Texas hold ’em are also on offer. But the complex’s “nouveau cabin” feel may not suit everyone’s taste. 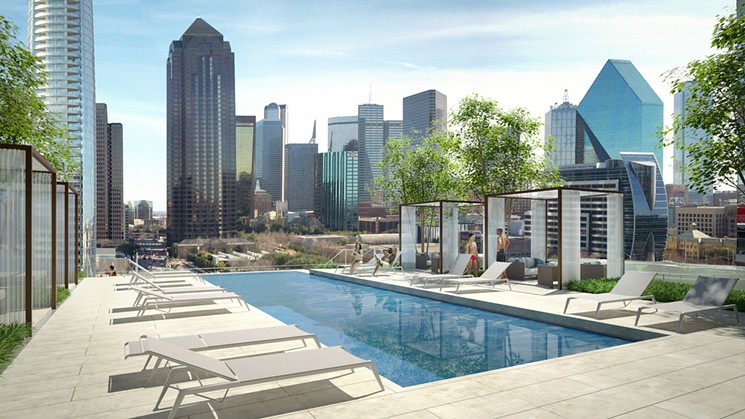 The second most expensive spot on our list, in the heart of the city.
apartments.com
1 Bedroom $2,525 – $4,686
Just barely missing our top spot, the Residences is right along Klyde Warren Park on the Uptown side. By its location alone, it should come as no surprise that a 782-square-foot unit in the building starts at more than $2,500 per month. Having Klyde Warren at your doorstep is pretty cool and perhaps even worth the price these apartments command alone. Luckily these Residences don’t skimp out on the amenities, which, among other things, include one of the coolest rooftop infinity pools on this list.

Don't be fooled by your first impression, The Laurel has some of the highest rents in town.
apartments.com
1 Bedroom $2,560 – $3,800
Now while The Laurel may boast some of the most expensive entry-level one-bedroom unit rents in Dallas, those prices do come with a bit more square footage than your average luxury apartment complex. With entry-level units that at least break 1,000 square feet and have 10-foot ceilings as well, there’s simply more room to grow. The complex is located not far from our previous Preston Hollow entry, just a handful of blocks away from NorthPark Center. So it may be a bit off the beaten path compared with comparable apartments in Uptown. But these apartments certainly still come at a price that rivals the most expensive apartments in Dallas.
KEEP THE DALLAS OBSERVER FREE... Since we started the Dallas Observer, it has been defined as the free, independent voice of Dallas, and we'd like to keep it that way. With local media under siege, it's more important than ever for us to rally support behind funding our local journalism. You can help by participating in our "I Support" program, allowing us to keep offering readers access to our incisive coverage of local news, food and culture with no paywalls.
Make a one-time donation today for as little as $1.