The Most Famous Graves in Dallas-Fort Worth 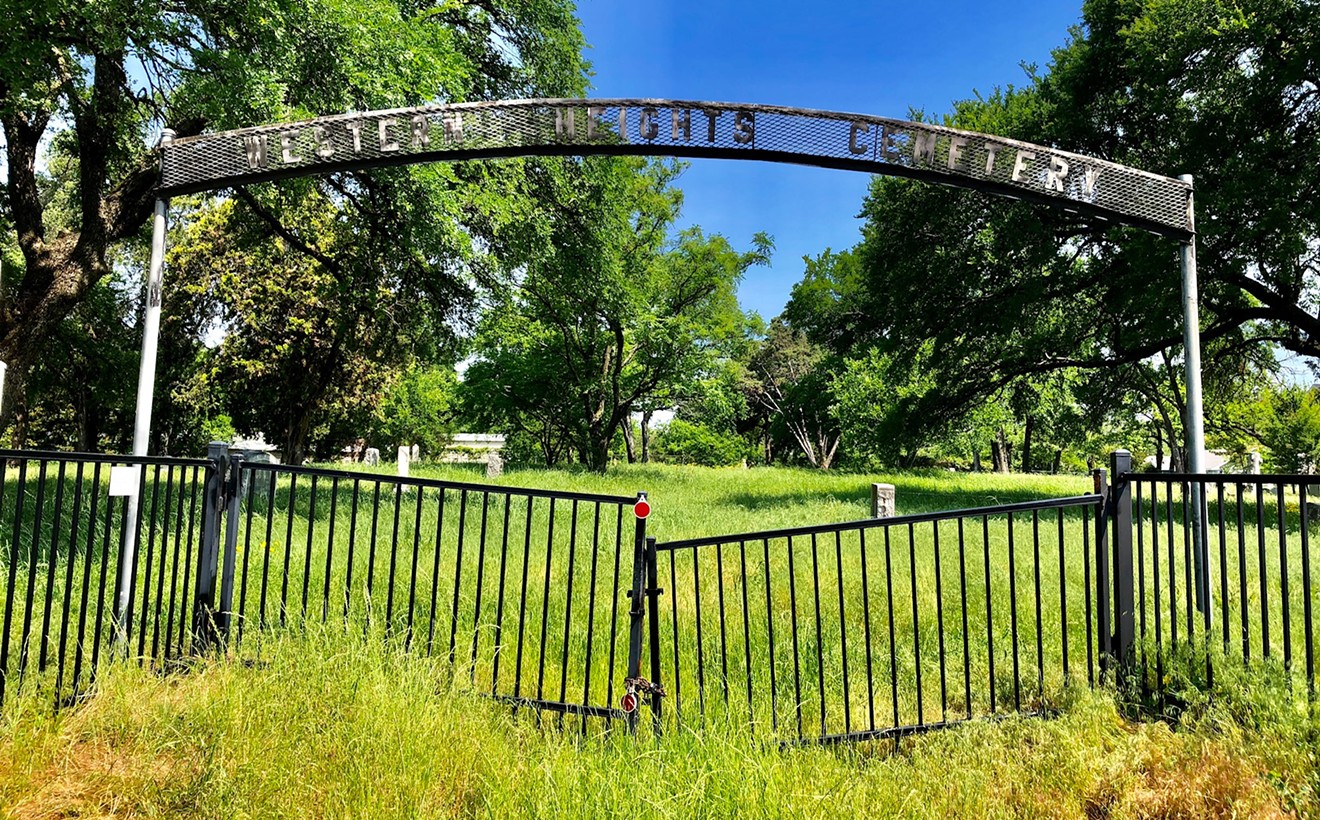 The Western Heights Cemetery in Oak Cliff has a famous resident: Clyde Barrow. Elvis Anderson
Throughout the pandemic, hundreds — and in some places, thousands — gathered daily in North Texas without regard for social distancing. In the trenches they turned a blind eye, a deaf ear and a cold heart to Dr. Tony Fauci’s suggestions; a silent protest of sorts, this group was spaced closer than 6-feet apart. They assembled indoors and outdoors, in the city and countryside. They are the deceased.

The funeral business was one of a few industries unaffected in the past year, as cemeteries never closed. Locally, we can boast of Sparkman-Hillcrest on Northwest Highway, affectionately known by some as “Sparky’s,” known for the hottest plots in town, a who’s-who of people who have made Big D their permanent address.  About 40 different sections (or gardens, as they call them in the death care industry) are spread about the cemetery’s 88 acres next door to NorthPark Center. Plus or minus a few grand, and depending on the deals, a spot for one at Sparky’s starts at around $12,000. They have a climate-controlled mausoleum, too, which will costs you $15,000 and up just to keep your cold body even cooler. Eight miles south of downtown, it’s a little cheaper at Laurel Land Memorial Park. A single plot there starts at around $4,000.

North Texas is home to several high-profile tombstones, whether famous or infamous, running the gamut from guitar gods to crooks. Here are the hottest local plots.
click to enlarge 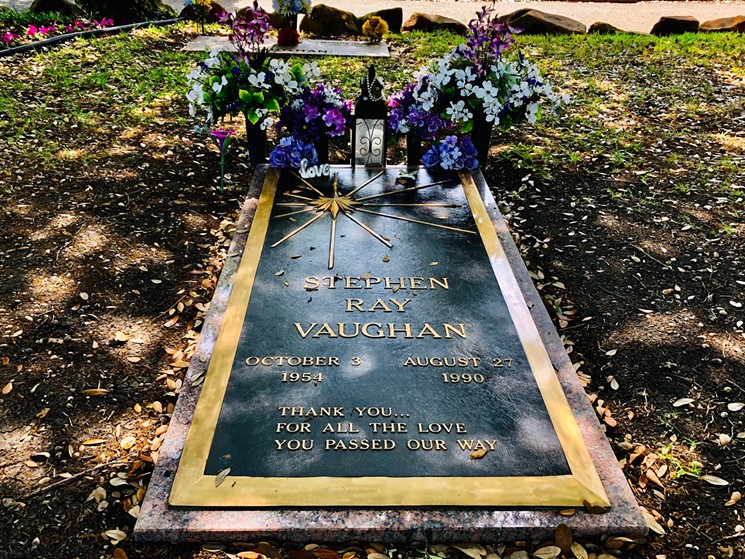 Guitar god Stevie Ray's grave is in his native Dallas.
Elvis Anderson
Stevie Ray Vaughan
Laurel Land Memorial Park, 6300 South R.L. Thornton Freeway
Vaughan’s resting place is an island-like garden bordered by large rocks, shaded by an oak tree and surrounded by blooming flowers. A plaque reads “Vaughan Estate,” and it holds several bandanas left by fans and friends. The musician's parents, Jimmie Lee and Martha Jean, are also there and etched in stone is their wedding date, January 13, 1950. Jimmie Lee was 64 when he died in 1986, Martha Jean was one day shy of 81 when she died in 2009 and Stevie Ray went too soon on August 27, 1990 at only 35 years old.

Local artists still honor SRV on walls in Deep Ellum and all over Texas. The gone-too-soon guitarist's style is undeniably Texan. “I like to play like I’m breaking out of jail,” he once said.
click to enlarge 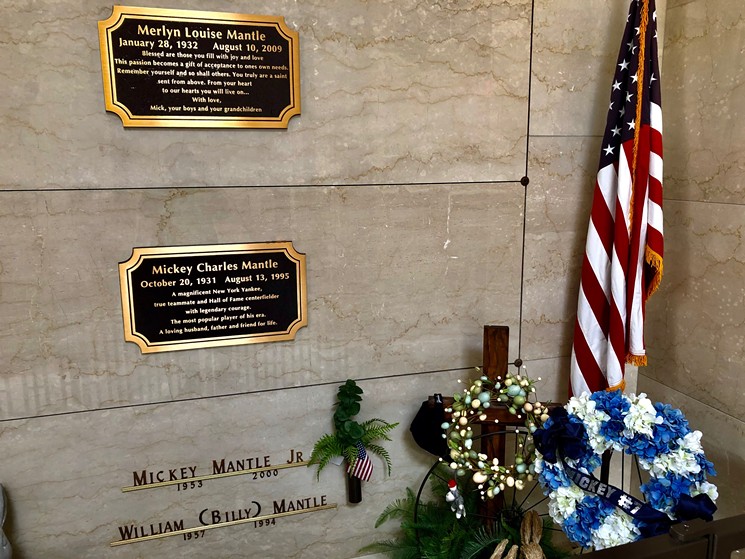 Baseball giant Mickey Mantle is in the uber-exclusive Sparkman-Hillcrest Mausoleum.
Elvis Anderson
Mickey Mantle
Sparkman-Hillcrest Mausoleum, 7405 W. Northwest Highway
The crowd roared and cheered in an unimaginable 10-minute standing ovation for Mickey Mantle when he returned to Yankee Stadium in 1969. He was there for Mickey Mantle Day as his jersey was being retired — no other Yankee would ever wear No. 7 again. It was his first time back in the house where he was a 20-time All-Star, a seven-time World Series Champion and undeniably the world's greatest switch hitter. Mantle was embarrassed as the raucous applause went on for eight minutes — and kept going.

About 25 years after that moment, in an interview with Bob Costas about a year before he died, “The Mick” suggested he hadn’t lived up to his own potential. The “Commerce Comet,” as he was called, was from Commerce, Oklahoma, near the Kansas and Missouri state lines. Just 17 when he joined the Yankees organization, he was a self-described “head-ducking country boy.” Mantle would eventually get comfortable in New York City. With teammates Billy Martin and Whitey Ford, they drank hard, chased women and won baseball games.

Mantle married Merlyn, his childhood sweetheart, shortly after joining the Yankees. She lived in Dallas and raised their four sons while Mantle played for the Yankees in New York for 18 seasons. He visited Dallas often and played golf at Preston Trail Golf Club, a private club in North Dallas. Fellow member and PGA Tour professional Lanny Wadkins has said that most of the rules at Preston Trail are because of Mickey Mantle.

Along with his wife, and two of four sons, Mickey Jr. and Billy, Mantle rests in the Sparkman-Hillcrest Mausoleum. Mounted against the polished marble wall, Mantle’s epitaph reads, “A magnificent New York Yankee, true teammate and Hall of Fame centerfielder with legendary courage. The most popular player of his era. A loving husband, father and friend for life.”
click to enlarge

Top football coach Tom Landry is also honored locally with a stretch of highway.
Elvis Anderson
Tom Landry
Sparkman-Hillcrest, 7405 W. Northwest Highway, Dallas
Tom Landry has a bronze statue outside of AT&T Stadium, a stretch of Interstate 30 between Dallas and Fort Worth is named Tom Landry Highway and he’s one of the top five NFL coaches to ever live.

Under head coach Jim Lee Howell, Landry was a player-coach defensive back and defensive coordinator for the New York Giants in 1954 and 1955. From 1956 to 1959, he became a full-time defensive coordinator and coached in three championships, winning one. When the Dallas Cowboys were established in 1960, Landry was named head coach, a job he kept for 29 seasons. Famous for his fedora, Landry had 20 winning seasons, took the Cowboys to five Super Bowls, winning two and ranking fourth in all-time wins.

In 1988, Landry’s final season, the Cowboys won three games and lost 13. Shortly thereafter, on Feb. 25, 1989, Jerry Jones purchased the team and fired Landry a day later. New coach Jimmy Johnson would win the first of three Super Bowls in 1993. It might've been the right decision, but it’s never pretty firing a legend.

Landry was laid to rest on the east end of the cemetery near NorthPark Center under a monument marked “Landry.” A sculpted fedora hangs from one of its corners.
click to enlarge 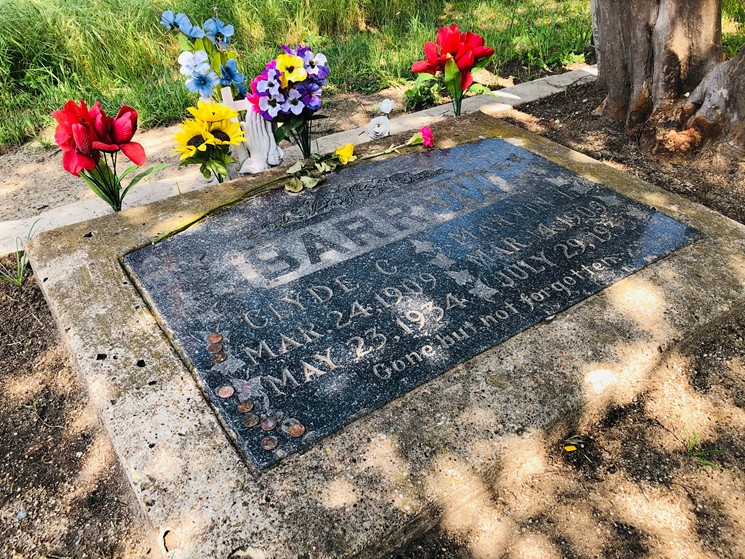 Bonnie Parker and Clyde Barrow
Crown Hill Memorial Park, 9178 Webb Chapel Road
Western Heights Cemetery, 1617 Fort Worth Ave.
Between 1932 and 1934, Bonnie and Clyde lead the Barrow Gang, robbing stores, swiping cars and shooting  anyone in their path. The group stole 30-caliber BAR machine guns from armories and drove the fastest car made at the time, the Ford V-8. Their guns overwhelmed police and their Fords left chasers in the dust. Despite a trail of murders, America became enamored with the outlaws after a roll of undeveloped Kodak film was found in their Joplin, Missouri, hideout. A local newspaper developed the images and Bonnie and Clyde went the '30s equivalent of "viral." 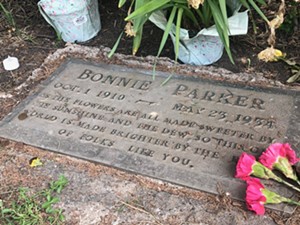 While his ban-robbing sweetheart Bonnie is across town.
Elvis Anderson

On May 23, 1934, Bonnie Parker and Clyde Barrow were ambushed in Louisiana. The police fired more than 130 rounds into their vehicle, killing the pair immediately. Their bodies were taken to the couple's hometown of Dallas. Barrow’s funeral happened first, on May 25, with thousands in attendance. An even larger crowd attended services for Bonnie Parker the next day.

Hollywood keeps the couple's story alive. Along with several documentaries, and biographical movies is the 1967 film Bonnie and Clyde, which starred Warren Beatty and Faye Dunaway and won a few Academy Awards. Netflix released The Highwaymen in 2019, which shares the police's perspective.

Parker’s grave is in Crown Hill Memorial Park, while Barrow is in the Western Heights Cemetery with gang member and brother Buck. Today, their relatives are hoping to reunite their graves.
click to enlarge 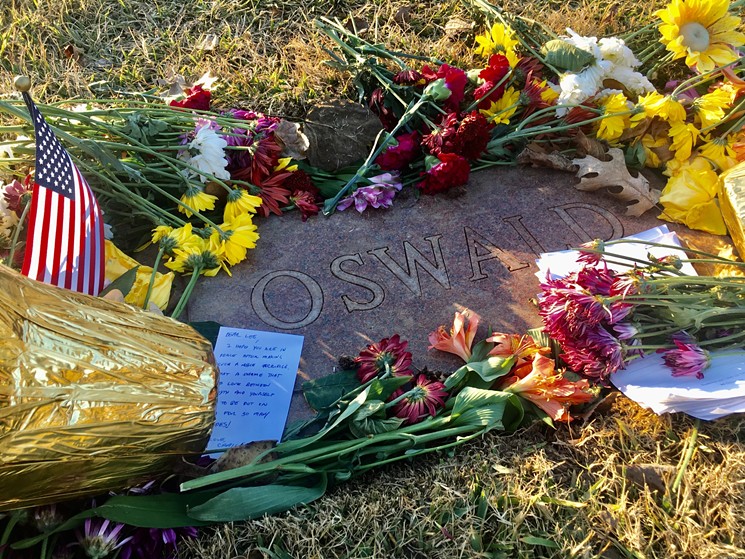 Lee Harvey's grave is a big attraction in Dallas.
Elvis Anderson
Lee Harvey Oswald
Shannon Rose Hill Cemetery, Fort Worth
Of all the high-traffic graves in Dallas-Fort Worth, perhaps the resting place of the man who murdered President John F. Kennedy in 1963 receives the most flowers, mementos and letters. A handwritten note resting on Oswald’s headstone recently read, “I hope you are in peace after making such a noble sacrifice. What a shame that the love between Judyth and yourself had to be put on hold for so many decades!” The note’s message supports the notion of a JFK assassination conspiracy theorists who believe Oswald when he said, “I’m just a patsy.”

Oswald’s lawn-level headstone is simple. There isn’t a birthdate or death date, no epitaph either, it simply reads, “OSWALD.”
click to enlarge 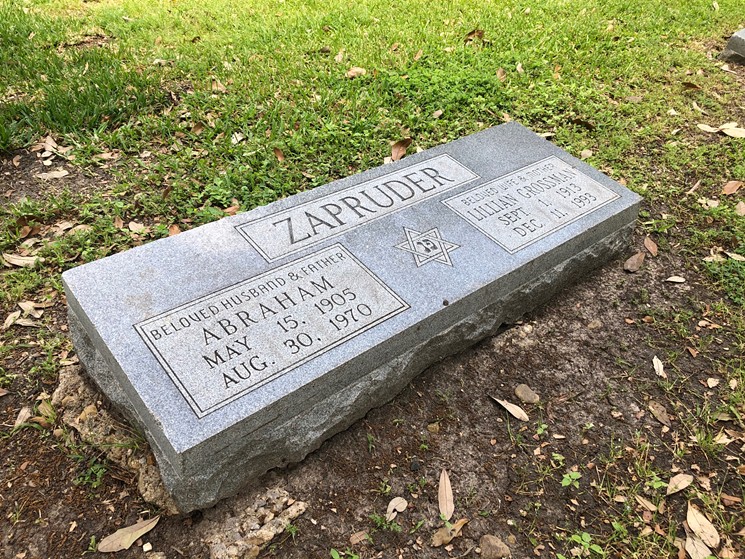 Honorable Mentions
There are other famous graves in North Texas. Ben Hogan is likely the third greatest golfer eve, and he’s in the mausoleum at Greenwood Memorial Park in Fort Worth, which also hosts the grave of Rod Roddy, the famous voice of The Price Is Right. The words “COME ON DOWN” are engraved on his headstone.

An American flag flies above the Perot Family’s beautiful garden in Sparkman-Hillcrest. Seven Perots are there including local business tycoon, philanthropist and politician Henry Ross Perot. Mary Kay Ash, founder of Mary Kay Cosmetics, is also at Sparkman-Hillcrest in the mausoleum.

Another connection to the JFK assassination is Abraham Zapruder, whose home movie of President Kennedy’s motorcade and subsequent assassination is the most thorough footage of the murder. He’s in the Temple Emanu-El Cemetery in Uptown.
click to enlarge 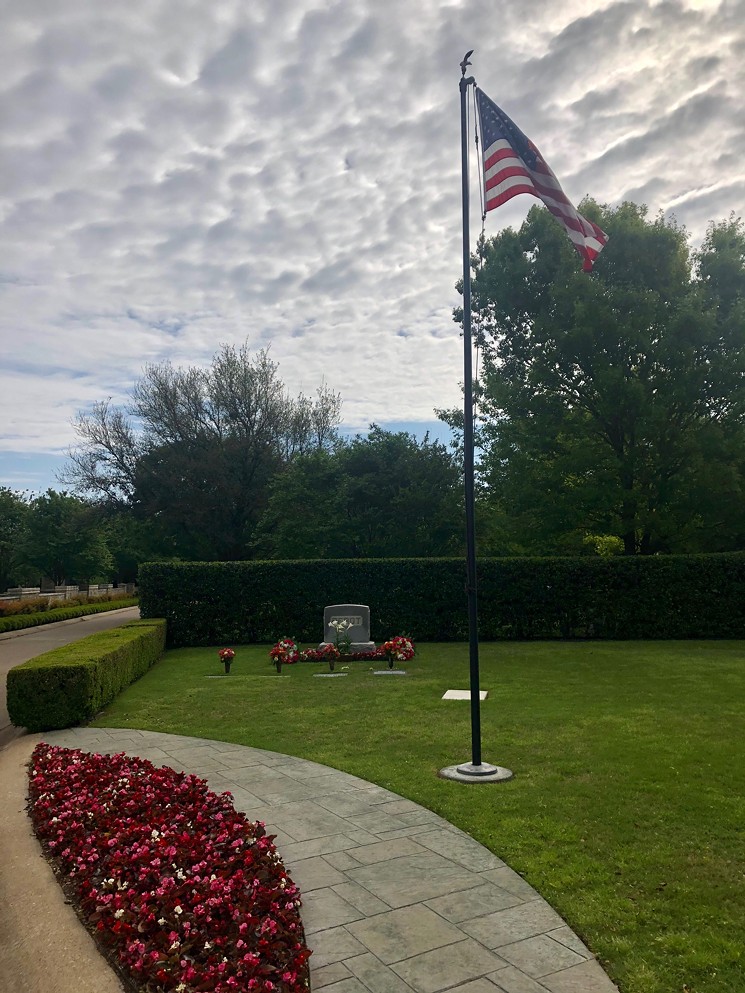 Business tycoon, philanthropist and politician Henry Ross Perot has his own American flag.
Elvis Anderson
KEEP THE DALLAS OBSERVER FREE... Since we started the Dallas Observer, it has been defined as the free, independent voice of Dallas, and we'd like to keep it that way. With local media under siege, it's more important than ever for us to rally support behind funding our local journalism. You can help by participating in our "I Support" program, allowing us to keep offering readers access to our incisive coverage of local news, food and culture with no paywalls.
Make a one-time donation today for as little as $1.