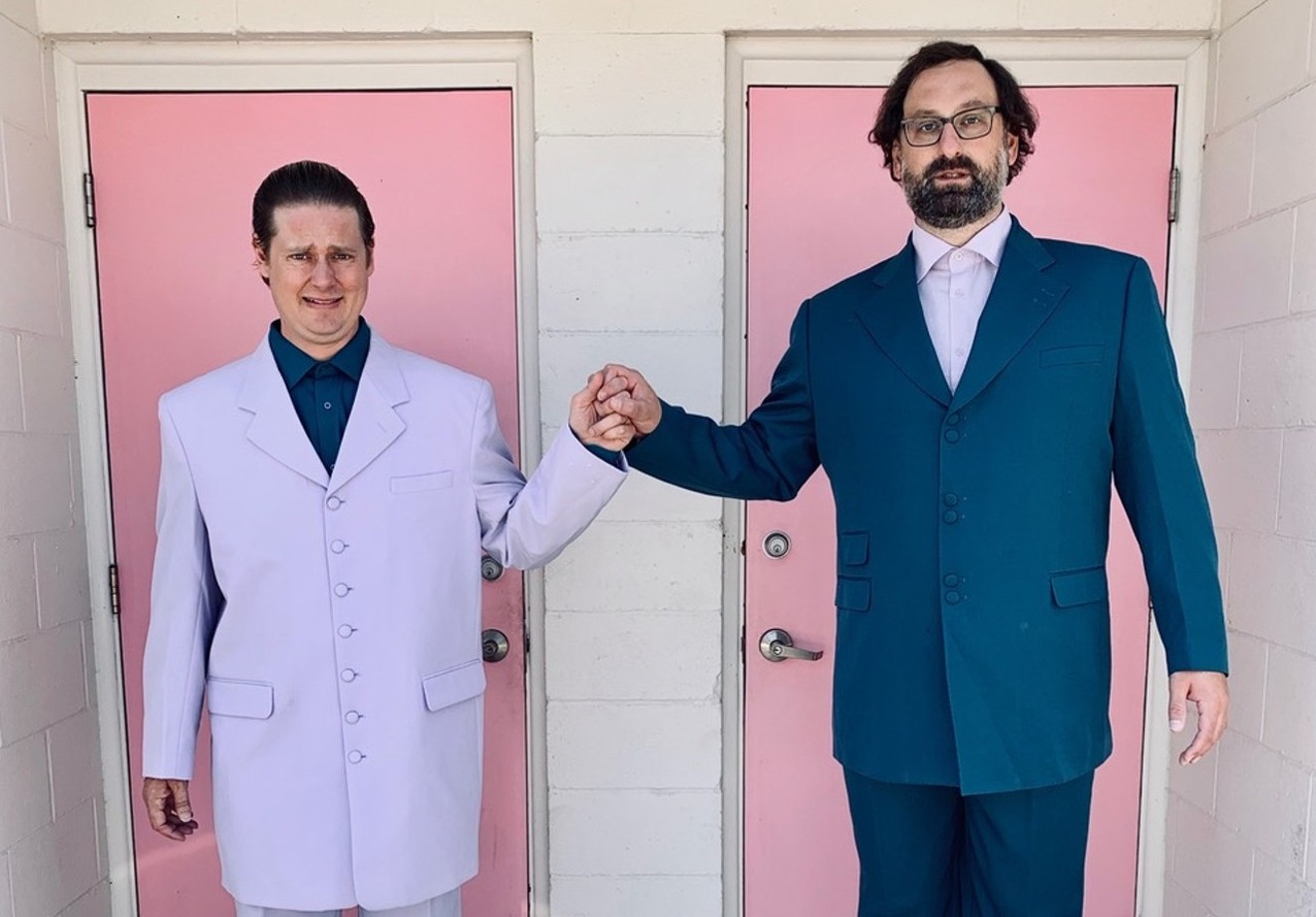 Comedians Tim Heidecker and Eric Wareheim can't even get through work without cracking each other up. Caroline Bader

Terry Jones, the founding member of the British comedy royalty known as Monty Python who passed away on Wednesday, said once in an interview about the team's comic mindset, "We weren't concerned with making anyone but ourselves laugh."

The comedy duo Tim and Eric, also known as Tim Heidecker and Eric Wareheim, embody that idea better than any modern comedian or troupe. They simply do what makes them laugh and put it out on the air or on a stage even if it seems disorienting, gross or just plain incomprehensible to audiences. If it makes them laugh, it will make others laugh.

Heidecker says they recently taped a rehearsal of their new live show, the Mandatory Attendance Tour, and the footage showing them trying to get through some ridiculous scenes and songs became its own form of formless comedy.

"I'm telling you, honest, last week there hasn't been a bit from the live show that we've been able to get through without cracking each other up," Heidecker says, referring to the rehearsal for their Mandatory Attendance Tour that stops in Dallas on Thursday, Jan. 30 at The Majestic. "It's a fun place to be where we're like, 'How are we going to get through this without cracking each other up?' and I'm not saying it's the most brilliant thing or anything. A lot of it is stupid as well. It just kills us."

He says he'd like to do a behind-the-scenes documentary of their shows, but he notes with a laugh that "we're too unorganized."

Tim and Eric's style is fast, colorful, loud and sometimes downright disgusting. It bathes in silliness, awkwardness and absurdity the way that Eric bathed in his "Shrim" bath in their 2012 feature film Tim and Eric's Billion Dollar Movie (don't look it up at work or while you're eating, especially if what you're eating looks anything like gravy). There are moments in their shows that feel like they are daring you to look away, creating tension and confusion that leads to genuine laughter.

Some of the best examples in their cult comedy are in sketch show Tim and Eric Awesome Show Great Job! for Adult Swim. There, a friendly mattress salesman played by Will Forte lies down on one of his star products and dreams images of bloody murder and mutilation and gory destruction. A professional prankster named Spaghet jumps out and scares people as if it's some kind of art form that you'd hire to perform at birthday parties or corporate retreats. Or a commercial for a trivia board game called "It's Not Jackie Chan" contains a handheld buzzer that gets louder and longer the more it gets pushed as one of the players smiles and stares into the camera as though he's trying to penetrate the audience's soul through the screen while his fellow players writhe in aural pain.


"I'm telling you, honest, last week there hasn't been a bit from the live show that we've been able to get through without cracking each other up." — Tim Heidecker

The duo once produced an ad for something called the "Diarrheaphragm."

Thanks to their massive success and huge output of TV, movies and internet series, adding a tour on top of all that might sound like an insane lack of sleep, but it's where Tim and Eric are their most free as performers.

"It's amazing and sort of special," Heidecker says. "Now that we're a little older, we can reflect and appreciate that we can still get together and really, genuinely make ourselves laugh and find new ways to make each other laugh. That was always the fundamental place where we started. We were always kind of doing this for us or our friends."

Tim and Eric have been on TV, onstage or some other form of media for more than a decade. They've become so popular and influential that they've been able to launch the careers of other fresh comic minds, like comedian Eric Andre, who hosts the hilarious anti-talk show The Eric Andre Show on Adult Swim; musician Mike Lutsko, who found fame uploading videos of folksy songs replacing lyrics with quotes from the very large mouth of conspiracy lover Alex Jones; and comedy video editor Vic Berger, who made talk show and game show host Steve Harvey funnier (or sadder, depending on your view).

Heidecker says both Lutsko and Berger worked on the music and videos for the new material in the Mandatory Attendance Tour shows.

"It's fun because these guys kind of grew up on our comedy a little bit, and they're like the new generation but we've been collaborating with them on this tour and it's been really fun," he says. "It's added some fresh faces to our old bones."

The goal of every comic property that Heidecker and Wareheim produce is to stand out and make their own — whether it's their latest TV project, a spoof of the family-friendly sitcom concept called Beef House premiering on Adult Swim later in the year or their latest stage shows.

"I also kind of look at the landscape of comedy out there and not to say that ours is better or worse or anything, but there just still isn't anything quite like it," Heidecker says. "What we're doing feels very unique and if we're not doing it, it wouldn't exist at all and when I say it, I'm talking about really dumb, gross, stupid, juvenile stuff at times but it's also kind of dark.

"Our tour manager was like, 'I think this is your most sinister show yet' which he said to us after rehearsing. It's two hours of us being jackasses. We designed the show to be very musical and of like you're watching some kind of upside-down Broadway show."


The ability to be so bold and brazen and take more risks just comes with having done it for so long and knowing that their fans will love it, he says.

"I think we're more confident," Heidecker says. "I think maybe in the past, we thought we needed to go out and present stuff that people are familiar with or take characters that were popular characters from the show and then use it more as a promotional device. I think we've built a history of trust with our audience. I said to Eric yesterday, 'We've got some big swings in the show that are totally untested and conceptual.' This seems really funny to us, but we have not performed it in front of an audience yet. So it's just a little scary there."

However, Heidecker knows that their confidence and dedicated fans will always be there to help make it work, especially when it seems like it's going out of control.

"The other thing Eric said yesterday when we were chatting about how we feel about the show and he was like, 'I think it's going to be a hit and by "hit," I mean the people that love us are going to love it,'" Heidecker says with a laugh. "'Everybody else is going to be left out in the cold.' I feel like we realized a while ago that the shit we do can really hit hard and be powerful for certain people, and it's never going to be the thing that appeals to a wider audience. So we're just happy that ours is wide enough to keep doing this. I'm happy we have that."
KEEP THE DALLAS OBSERVER FREE... Since we started the Dallas Observer, it has been defined as the free, independent voice of Dallas, and we'd like to keep it that way. With local media under siege, it's more important than ever for us to rally support behind funding our local journalism. You can help by participating in our "I Support" program, allowing us to keep offering readers access to our incisive coverage of local news, food and culture with no paywalls.
Make a one-time donation today for as little as $1.