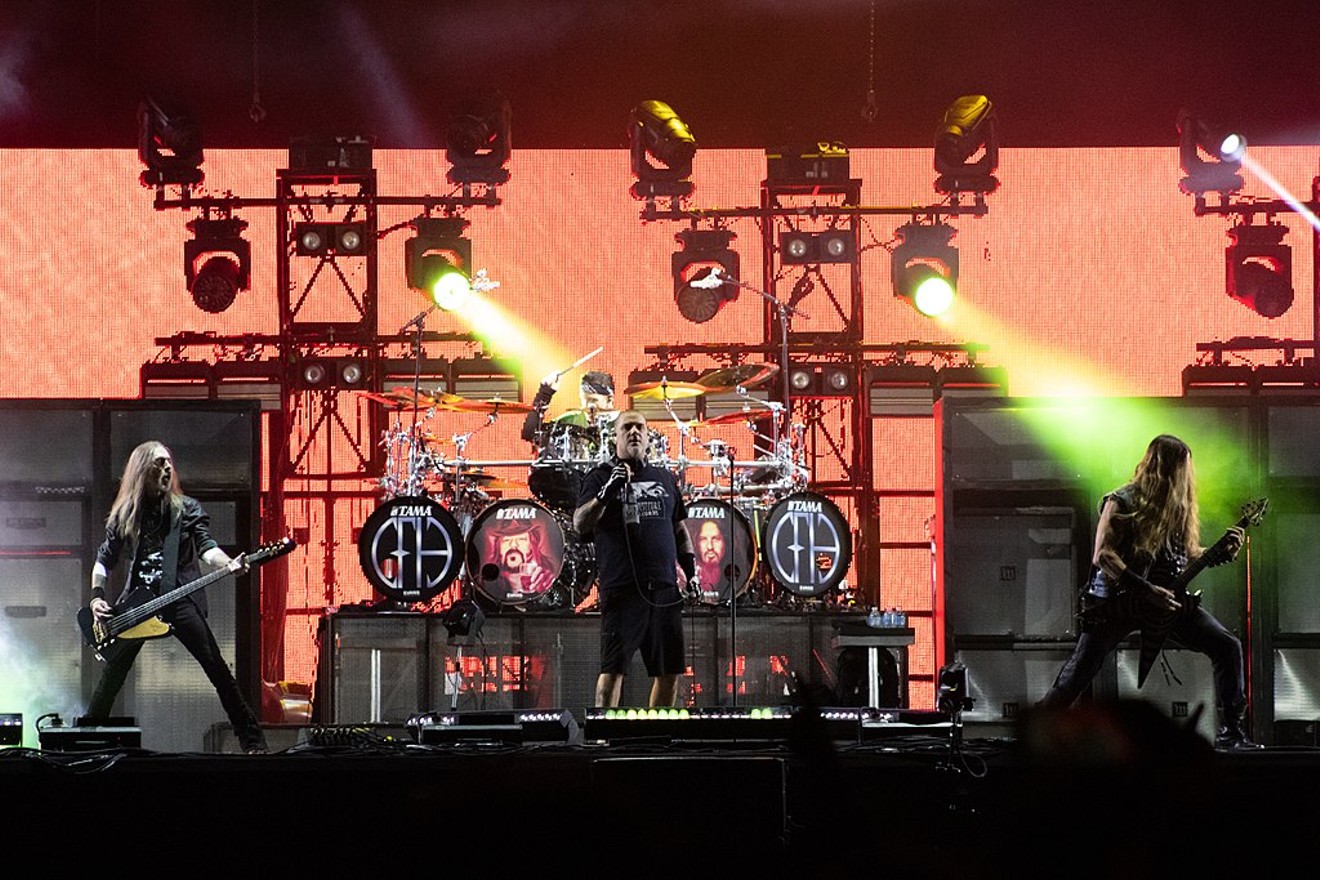 Pantera, pictured here during a 2022 reunion show in Mexico, has been dropped by a pair of German music fests. DiegoVigueras, CC BY-SA 4.0, via Wikimedia Commons
Nearly 85 years since the start of World War II, Germany is still working to atone for its past embrace of Nazi Party leader Adolf Hitler and his vile campaign to exterminate Jews. So perhaps it’s no surprise that two major music festivals there have chosen to distance themselves from a certain North Texas metal band infamous for its offensive, antisemitic antics.

Earlier this week, the festivals Rock am Ring and Rock im Park announced the elimination of the group from their summer 2023 lineups. The decision reportedly comes after organizers spoke with other musicians and fans, who bristled at the idea that Pantera would be taking the stage.

"Pantera will not be performing at Rock in the Park and Rock in the Ring 2023, as announced," reads a statement issued by the fests. "In the last few weeks, we have had many intensive conversations with artists, our partners and you, the festival fans, we have continued to deal with the criticism together and decided to remove the band from the program."

Metal lovers may remember that back in 2016, frontman Phil Anselmo bellowed “WHIIITE POWERRR” after performing a Nazi “Sieg Heil” salute onstage. Afterward, he attempted to blame the racist gesture on having imbibed too much white wine and claimed that he’d meant it as a joke, according to Metal Injection. But vocalist-guitarist Robb Flynn of Machine Head later poked holes in that excuse, alleging that there wasn’t any such beverage backstage.

To be sure, that wasn’t the only stain on the band’s record. Last year, an old video resurfaced showing late Pantera guitarist Dimebag Darrell using the N-word.

Event organizers may be especially worried about welcoming Pantera considering the region's history. For instance, one of the fests is held in Nürnberg (Nuremberg in English), which was host to a slew of pro-Nazi rallies from 1933 to 1938, according to Blabbermouth.

Germany’s Green Party also spoke out against this summer’s Pantera shows, noting during a Nürnberg city council meeting that Anselmo had "repeatedly and deliberately made Nazi gestures and yelled racist slogans." The party then asked that Pantera be removed from both bills.

Rock am Ring and Rock im Park are typically viewed as “one event with almost identical lineup,” and they're considered one of the world’s biggest music fests and the largest in Germany, per Blabbermouth.

So far, Pantera has stayed mum on the ordeal. But in 2019, Anselmo was asked during an interview with Kerrang! magazine for his thoughts on the “white power” controversy.

"I feel like it's ridiculous,” he reportedly said at the time. “I made an off-color joke and 'Boom!' — it's like I'm literally Hitler! I'm not. I take each individual one at a time, in the way that any logical individual will. I have love in my heart.”
KEEP THE DALLAS OBSERVER FREE... Since we started the Dallas Observer, it has been defined as the free, independent voice of Dallas, and we'd like to keep it that way. With local media under siege, it's more important than ever for us to rally support behind funding our local journalism. You can help by participating in our "I Support" program, allowing us to keep offering readers access to our incisive coverage of local news, food and culture with no paywalls.
Make a one-time donation today for as little as $1.