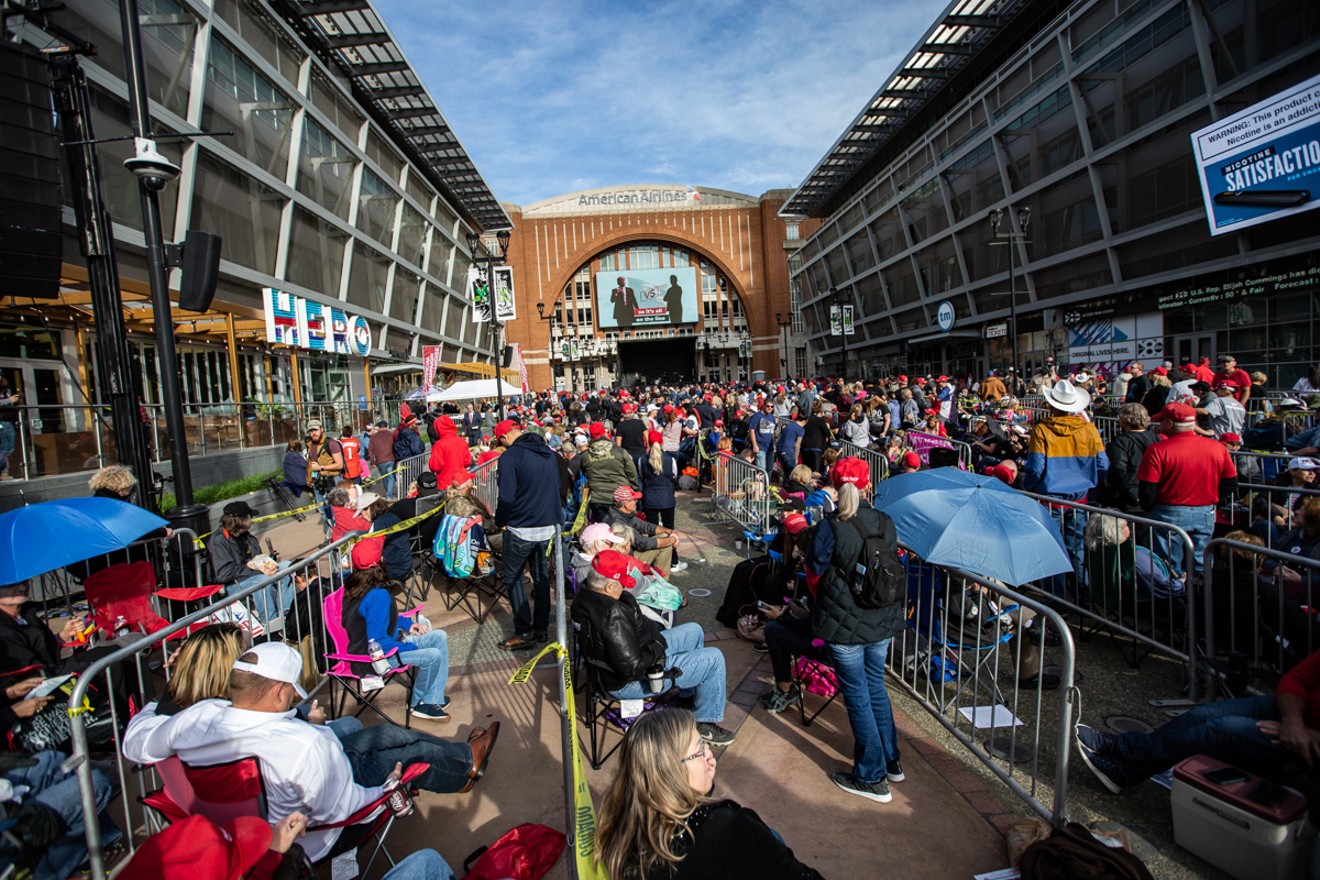 Hey, Red Hatters: Get you some better music. Melissa Hennings
For years, political campaign organizers have used pop music to punctuate their rallies and speeches with familiar anthems. It's such a common practice that the American Society of Composers, Authors and Publishers (ASCAP) has a list of guidelines for proper usage so the artists get paid and can give their approval before being associated with a campaign.

The use of these songs usually goes one of two ways: They either become a clever anthem that speaks to an untapped generation of voices — such as presidential candidate Barack Obama's "Yes We Can" by will.i.am or presidential hopeful Bill Clinton's use of "Don't Stop" by Fleetwood Mac — or they are hilariously unaware choices that spell out the true motives of a campaign better than Bad Religion or Rage Against the Machine ever could. Conservatives have used "Born in the USA," when they really shouldn't, but there are some other really cringeworthy uses of popular songs in politics. Here are some of the best worst choices of those songs:

1. Ross Perot and Patsy Cline
The failed third-party presidential candidate and Dallas philanthropist has done a lot for his city and country. A local play that premiered earlier this year at the Coppell Arts Center called Perot! American Patriot showed a side of Perot that doesn't immediately come to mind, even in the communities he helped build. He created a gigantic tech company from the ground up, spent millions to free two of his employees from an Iranian prison and donated a small fortune to build cultural facilities, civic groups and educational entities.

The less successful parts of his failed campaign for president in 1992 as a third-party candidate often overshadow his achievements and generosity. It didn't help that the song he personally chose for his campaign was Patsy Cline's maudlin country classic "Crazy." Perot even kicked off his campaign with the song, which was performed by a full Dixieland jazz band. It was an unusual, ambitious choice, but it just fed into the narrative used against him as a wild-eyed industrialist who was running only because he had the kind of bread needed to fund a presidential campaign. If Perot hadn't chosen the song, though, we're sure Ted Cruz would have for his own doomed presidential campaign.
2. Donald Trump and Pharrell Williams
If you're surprised that former president and possible future felon Donald Trump used an artist's song without paying for it or even asking for permission, then you really don't pay attention. Trump has built his career on not paying for stuff — including contractors, partners and even his own employees. How does a guy who doesn't pay his own people the money they deserve STILL find a way to bankrupt an Atlantic City casino? Trump must've been literally eating the money because it's the closest he'll ever get to trying anything green.

The list of artists who complained and threatened to take legal action against Trump for using songs at rallies is long: Adele, Aerosmith's Steven Tyler, Neil Young, Queen's Brian May, The O'Jays' Eddie Levert. The dumbest instance, however, goes to the time Trump used Pharrell Williams' catchy summer hit "Happy" in 2018. Trump's people chose to play "Happy" at an Illinois rally on Oct. 27, 2018, just hours after a mass shooting at a synagogue in Pittsburgh. Williams demanded the campaign stop using his song with a cease-and-desist letter. Trump, who would rather hack off a limb (or hire someone to do it for him and then not pay them) than admit he made a mistake, defended the use of the song to Fox News' Laura Ingrahm, saying "rallies are meant to be fun."
3. Bob Dole and Sam & Dave
Few musicians have had such a huge impact on the industry and the culture as the soul duo of Sam Moore and David Prater. They brought future geniuses to prominence, working with such artists as Isaac Hayes and Booker T. and the MGs, and they influenced some of the biggest names in modern music. The pair bridged a deep racial divide with their ability to speak to any music lover.

Their music also gave us one of the most hilarious attempts from a politician to seem cool, the likes of which we haven't seen since Hillary Clinton danced "The Macarena." U.S. Sen. Bob Dole ran against President Bill Clinton in 1996 after Clinton's first term. He must have known that the success Clinton's team had with Fleetwood Mac's song would be hard to top, but Dole tried with Sam & Dave's mega-hit "Soul Man." But Dole didn't just adopt the song as is — which would've been funny enough. Instead, he Weird Al-ed "Soul Man" into a campaign song called "I'm a Dole Man." The song didn't even have lyrics beyond the refrain, with the words "I'm a Dole man" being played over and over until he made it to the podium and started to speak. It's still a wonder that "Weird Al" Yankovic didn't threaten to sue Dole for sullying the good name of song parody.

4. Saddam Hussein and Whitney Houston
Not even unchecked dictatorships are immune to this trend of misappropriating musical artists' work to tell a really different story. In fact, the use of Katy Perry music in the politically marred 2014 film The Interview starring Seth Rogen really wasn't that big a joke. Murderous dictators love diva pop ballads for some weird reason.

Hussein's 2002 "election" (or whatever you call a rigged system where the "winner" has complete control over the voting process) had a campaign theme chosen by his party: Whitney Houston's 1992 hit cover of Dolly Parton's "I Will Always Love You," released as a single for her film The Bodyguard. Just imagine a tyrant walking out on a stage to a crowd of sycophants and hearing Houston's tearjerking love song blare over the loudspeakers. Hussein must've been a huge crybaby.
5. Angela Merkel and The Rolling Stones
Germany's former leader may have ushered in a new age of female empowerment in politics as her country's first female chancellor, but she's still just as vulnerable to making mistakes as the rest of us.

Merkel's first campaign in 2005 was successful, but it hit a huge road bump when her team chose The Rolling Stones' "Angie" as its campaign theme solely because the song and the candidate have the same name. If they had listened to the song instead of just reading the 1973 single's album cover, they would've understood why some of the song's lyrics weren't so campaign-friendly. Among those less-than-helpful lyrics: "Angie, you're beautiful, yeah, but ain't it time we said goodbye?" and "With no lovin' in our souls, and no money in our coats, you can't say we're satisfied." You know someone screwed up when a Helen Reddy song is the smarter choice.
KEEP THE DALLAS OBSERVER FREE... Since we started the Dallas Observer, it has been defined as the free, independent voice of Dallas, and we'd like to keep it that way. With local media under siege, it's more important than ever for us to rally support behind funding our local journalism. You can help by participating in our "I Support" program, allowing us to keep offering readers access to our incisive coverage of local news, food and culture with no paywalls.
Make a one-time donation today for as little as $1.