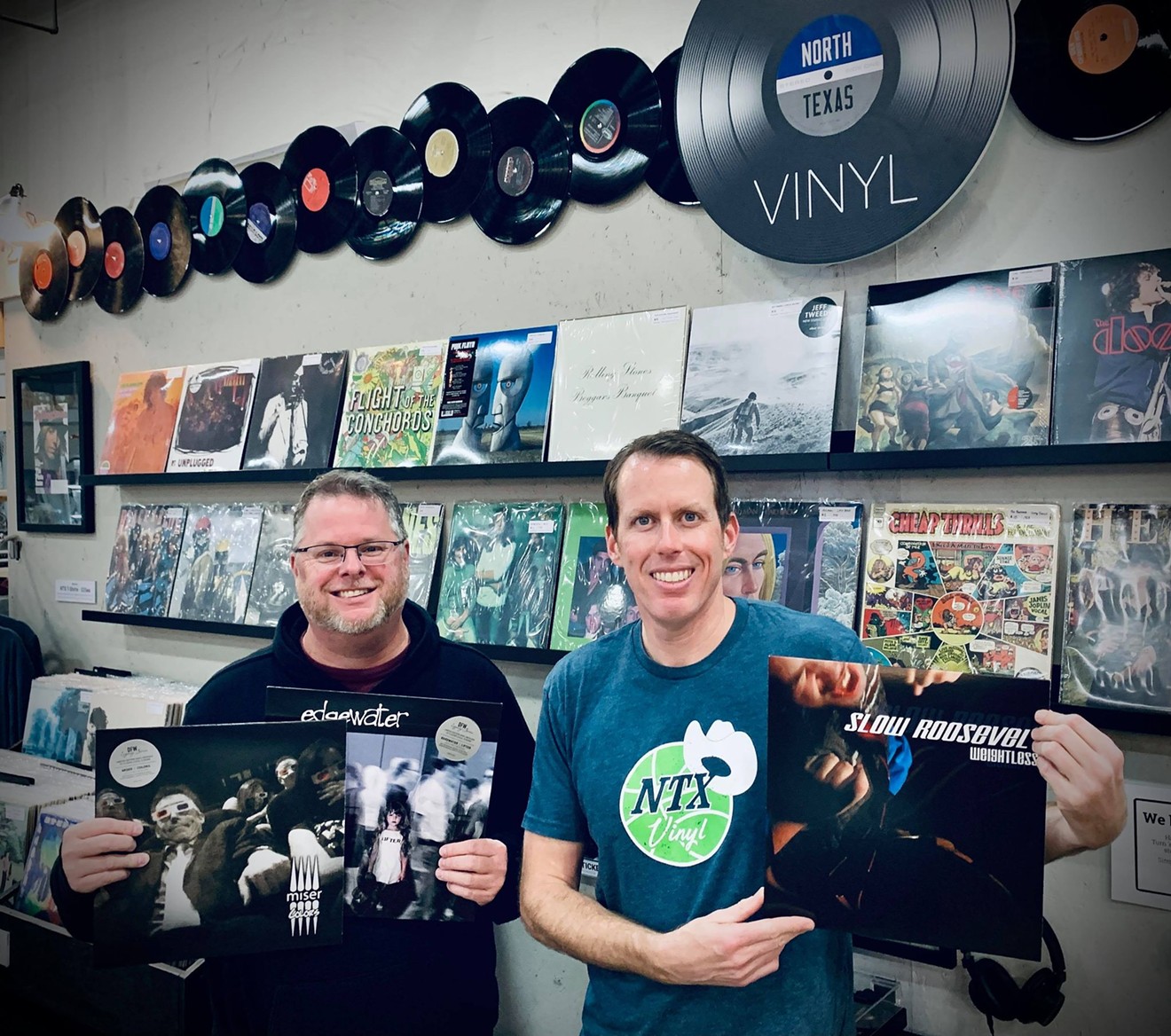 Travis Hill (left) and GI Sanders, at NTX Vinyl, are helping local nonprofits through rereleases of local albums from the early 2000s. Ben Sanders
On Wednesday, Feb. 10, the members of SouthFM met via Facebook Live to announce the re-release of their 2003 album Drama Kids, which will be available for the first time on vinyl on May 7.

But that’s not the story. This is.

One of those members, former guitarist G.I. Sanders, has grown up quite a bit since the days of being signed to (and ultimately dropped from) labels and becoming a family man with a boutique record shop called NTX Vinyl located inside the Painted Tree Marketplace antique mall in Highland Village.

After a chance meeting with an old acquaintance turned partner, Travis Hill of Broken Artist Management, Sanders has been on a mission to re-release music not only from his band, but albums that defined the DFW music scene in the '00s.

“Eight months ago, [Hill] came to me about that record by Miser [2006's Colors], which he’s managed,” Sanders says. “I had been thinking about taking the NTX Vinyl shop and doing a little label side of it as well, but I didn't really know what that was going to be.”

After talking the idea over with their friends, Sanders and Hill decided that if they could do the Miser record, they could also go through the same process for other bands from that period in Dallas music history. The micro-independent label NTX Records was born.

Both record collectors, Sanders and Hill wanted the newfound record label to release albums with a timeless quality — in terms of the music itself and the quality of the medium on which it is released.

“Now we’re talking about the DFW Legacy Series; instead of just doing one record, we decided to call it a series because then it becomes a little bit more collectible,” Sanders explains. “They're not on their own because, when someone comes to buy the fourth release, there's the other ones available and we want them to pick those up as well.”

In addition to the SouthFM record, the DFW Legacy Series has announced the re-release of Doosu’s Aqua Vita (1999), Slow Roosevelt’s Weightless (2001) and Edgewater’s Lifter (2001).

“It's not about pumping out as many records as possible ... It’s about creating something really unique, really cool that someone will really affect that person who saw that band at Trees in ‘99 or whatever.” – G.I. Sanders


The Edgewater album release has a special significance to Hill, who managed the band’s radio promotion at one point in their career. On the album’s sleeve, one will find a memorial for singer Matt Moseman who passed away in 2016 at the age of 43.

Additionally, proceeds from the album’s sales will be donated to a charity that means a lot to Moseman’s surviving family members.

“We’re about to write a pretty decent check to Journey of Hope, which is the organization that helped Matt’s widow and their kids to get through that time in their life when they lost him,” Hill explains.

But it’s not just the Edgewater release that is giving back. Sanders and Hill explain that they want the entire DFW Legacy Series to be a nonprofit.

“With Slow Roosevelt, once we hit profit, a cut goes to the Foundation 45, which is a foundation that [singer Peter Thomas] is huge on,” Hill says. “My day job is corporate fundraiser for the SPCA of Texas, so that's going to be a charity that we want to help out.

“When we do make a little bit of money, it's not falling in our pockets. We want to find causes that we can help and that will actually benefit from that help.”

So far, Sanders and Hill are excited to see the overwhelmingly positive response the series has garnered from local music aficionados and from folks who happened to meet at a SouthFM show.

In less than 24 hours, SouthFM hit their target sales number in pre-orders alone. All signed copies of the series’ current releases have been sold out or are about to be sold out. The series’ Facebook group is at about 1,000 members.

Sanders, in part, credits the stay-at-home orders for the success of the series.

“I've talked to so many people who, not necessarily started collecting during quarantine, but they actually started listening to records and that got out and started buying more,” he says. “It has snowballed! There's a whole bunch of people who, a year ago, owned 10 records and a crappy little Crosley Cruiser who now have a real system and 250 records because they’re at home all day long and already burned through everything on Netflix.”

While the label is currently focusing on re-releasing music by North Texas bands that was recorded between the mid-90s and mid-00s, they are looking to expand their artist roster with new artists as the label grows and live music becomes a thing again.

“It's not about pumping out as many records as possible,” Sanders says. “It’s about creating something really unique, really cool that someone will really affect that person who saw that band at Trees in ‘99 or whatever.”
KEEP THE DALLAS OBSERVER FREE... Since we started the Dallas Observer, it has been defined as the free, independent voice of Dallas, and we'd like to keep it that way. With local media under siege, it's more important than ever for us to rally support behind funding our local journalism. You can help by participating in our "I Support" program, allowing us to keep offering readers access to our incisive coverage of local news, food and culture with no paywalls.
Make a one-time donation today for as little as $1.