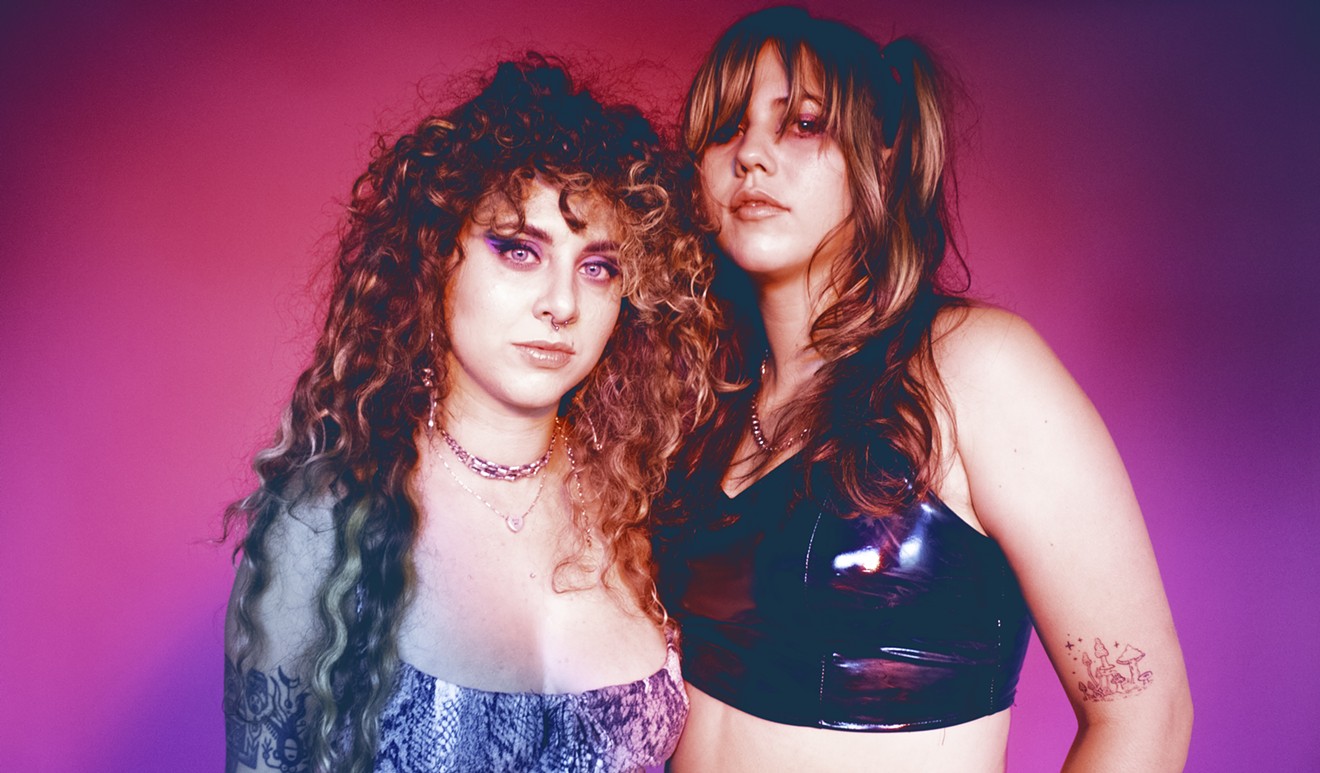 No matter what their name means, King Clam is on a rampage. Will von Bolton
It's open mic night at the Free Man in Deep Ellum. For Dallas-based rock-and-roll band King Clam, it's an adopted practice spot away from rehearsal space. The venue pulsates in a near fervor with the energy from the band. The crowd begins to chant after the group's impromptu set: “King fuckin’ Clam!”

“Basically, after a few practices, Austyn Williams, our bassist, signed us up randomly for the open mic over there," says singer Scarlett McPherson of their recurring, unofficial gig. "Then we noticed that we could probably just play our songs there so we could see how it works out with a crowd.”

Two months after they started using the open mic night as a marketing test space, King Clam already had a good few shows under its belt — including one at Trees in Deep Ellum, a bucket-list venue for many a band.

“I’m amazed that it happened this fast,” guitarist Skyler Chilton says. “We just got together six months ago. We got together near the end of quarantine with everything slowed the fuck down, so we had time to buckle down and focus.”

With the specter of COVID increasingly fading in our rearview mirrors, King Clam is on a rampage.

“I thought it was from a conversation Austyn and Scarlett had at the bar talking about their love and interest for vaginas," she says with a laugh. "That’s all I knew, but when they asked if I’d join I said 'Fuck it, I’m in.'”

The band’s sound falls somewhere between CBGB’s old punk rock and '70s rock and roll, like Janis Joplin fronting The Stooges. McPherson says her unique tone and timbre has been a part of her since before birth.

“My dad was in a rock n' roll band in the '80s into the '90s," she says. "My mom got pregnant so I was literally just in the womb listening to all this metal.”

The group's first release was a live studio session at their drummer Josh Davis’ studio (Davis Street Studios), and it perfectly captures King Clam’s relentless style, jamming six songs into 16 minutes. The lyrics range in theme from deadly women: “Deadly lady / lay it on me / got me feeling the thrill of lechery / seductress of the century,” to the joys of simultaneous oral sex in their song “69”:  “I’m gonna spend my time / in a passionate 69 / don't have no time for swine / I’m gonna hit the town / I’m gonna turn them all out / It’s my time to be alive.”

The band plans to release future material as a single release recorded with Ryan Michael, luminary frontman for Dallas rock band The Roomsounds, whom they also met at the Free Man.

"When we’d hit a snag and the band got too tense about being in the studio with all these mics on them ... I’d tell them, 'Play this next take like you’ve just had a couple tequilas at Free Man and you’re about to play open mic.'" – producer Ryan Michael


“He’s the best bartender around and after we played one night he looked at us with some wacky Einstein-type energy and said he wanted to record us," Chilton says. "Knowing how talented his band is, I was stoked that he liked our songs enough to want to record them.

“One week they showed up and played this song 'Rabbits' that blew my fuckin’ head off," Michael says. "It started with this Iron Man-type pounding drum pattern and then Scarlett and Skyler break into this haunting, witchy harmony vocal. I lost my shit. There’s something magic about the way Scarlett and Skyler’s voices intertwine. It’s reminiscent of the way Layne Staley and Jerry Cantrell from Alice and Chains sang together.”

Michael says that when King Clam finally got to his studio space "they already had the arrangements all figured out so I just put up mics and tried to capture what they do live, which is easier said than done."

"When we’d hit a snag and the band got too tense about being in the studio with all these mics on them," Michael says, "I’d tell them, 'Play this next take like you’ve just had a couple tequilas at Free Man and you’re about to play open mic.'”

Just as with their recording sessions, the feel of live performance is intrinsic to the band. The King Clam train shows no signs of stopping, and when you catch it be sure to get straight upfront of the stage to clam out with your jams out, yelling “King fuckin’ Clam.” That's the only way they do it.

“It’s been a blast," Chilton says. "We hope to have that released within the next few months, and in the meantime keep doing what we’ve been doing — playing tons of shows with killer local bands and just do what we love and have fun doing it with people who do what they love and have fun doing it.”
KEEP THE DALLAS OBSERVER FREE... Since we started the Dallas Observer, it has been defined as the free, independent voice of Dallas, and we'd like to keep it that way. With local media under siege, it's more important than ever for us to rally support behind funding our local journalism. You can help by participating in our "I Support" program, allowing us to keep offering readers access to our incisive coverage of local news, food and culture with no paywalls.
Make a one-time donation today for as little as $1.