Deep Ellum's Community Center Will House Historical Artifacts, But What Should Be Preserved? 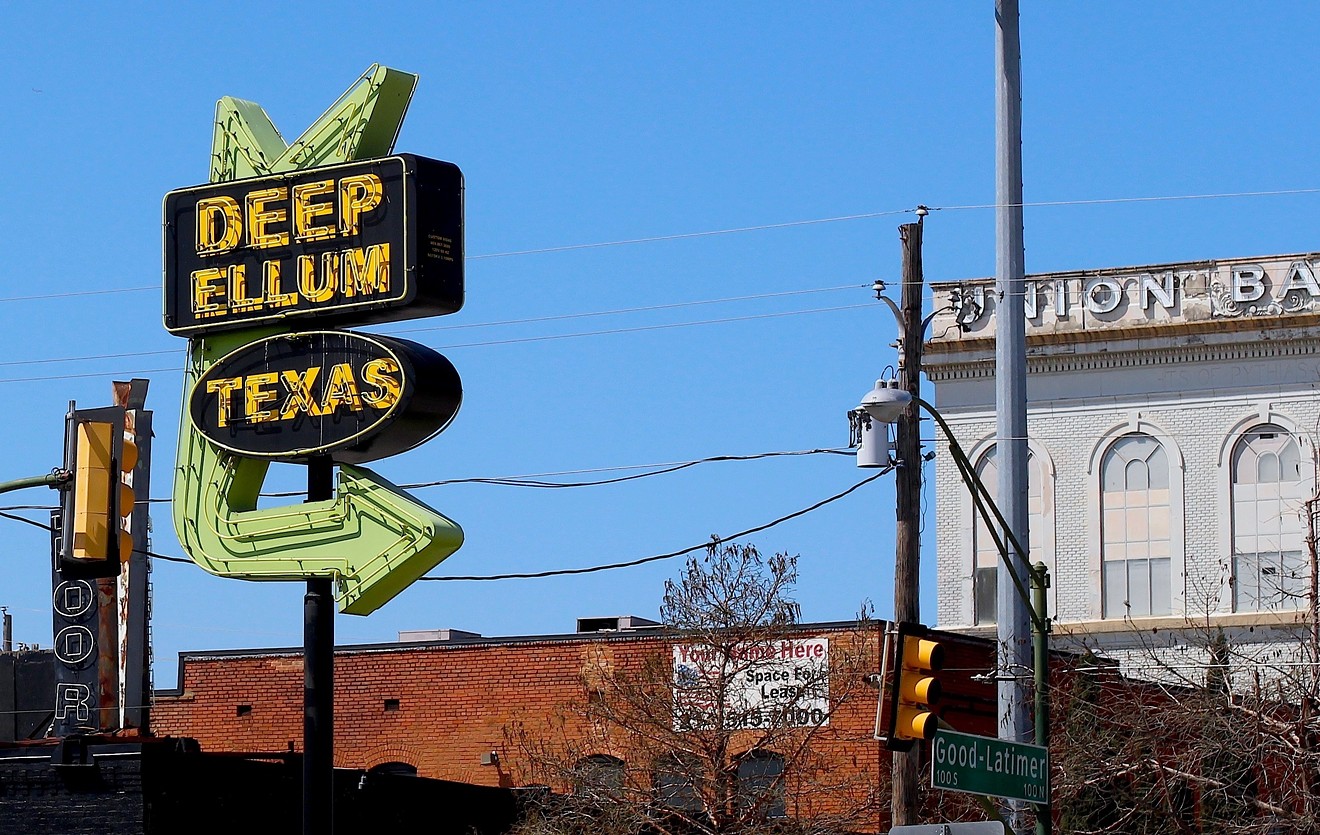 The Deep Ellum Foundation announced on Instagram that it's renting a two-story space on Elm Street to turn into "a multi-functional community and cultural center" in honor of the neighborhood's 150th anniversary.

One of the more interesting aspects of this new public space is the call on social media for "items of historical or sentimental value that tell a piece of Deep Ellum's story."

"Any kind of historical district with that much heritage, I think it would be cool to have something like that," says Kessler artistic director Jeff Liles. "We should pay homage to the people down there going back to the Depression era."

So what kind of stuff should go behind a thick wall of paned glass for future generations to observe?

"I have a ton of stuff out of my Mom's house that's just kind of sitting out there in storage," Liles says. "I'd be happy to go through it for them."

Pat Bywaters is a KNON radio host, the former executive director of Encore Park Dallas, which founded the 508 Park historic preservation project, and the grandson of "Dallas Nine" artist Jerry Bywaters. Pat Bywaters says the artifacts should cover Deep Ellum's rich musical history and acknowledge the neighborhood's complete history going back to the turn of the last century.

He cited Alan Govenar and Jay Brakefield's comprehensive history books Deep Ellum: The Other Side of Dallas and Deep Ellum and Central Track: Where the Black and White Worlds of Dallas Converged as two good starting points. The latter book's publisher, UNT Press, describes it as a chronicle of "the stories of remarkable individuals, including professionals, pawnbrokers and other merchants, police officers, criminals and the blues and jazz musicians who had a lasting impact on American popular music."

"Probably a good way to start is going through that history book because it covers other aspects of Deep Ellum and how the community came about," Bywaters says.

"It's the beginning of the music scene down there," Liles says. "It's basically an empty warehouse district. The kids who came down were all from the suburbs. It was kind of like their place to hide from their parents or school crew." – Jeff Liles


Deep Ellum's history goes beyond the live music and entertainment that helped lay its modern cultural foundation. Deep Ellum was founded in 1873 as a residential and commercial neighborhood that was "literally on the other side of the tracks," as Bywaters says, of the famed Texas and Pacific Railway that made Dallas a destination city in the state.

Deep Ellum still houses several historic spots such as one of the first Ford automobile plants from 1914 on Canton Street and the Knights of Pythias Temple building on Elm Street. The latter was designed by Texas' first African-American architect, William Sydney Pittman, and it served as an office hub for Black-owned medical and law practices.

There are several periods of Deep Ellum's history that parallel the changing economic climates in Dallas over the last 150 years.

"The story of Deep Ellum is boom and bust," Bywaters says. "It's had really sleepy times and really prosperous times. It always kind of sat there in the shadow of downtown and always had a bit of a mixed use by the community. It's mixed from a racial perspectives a bit and that might be the core of the story there."

The neighborhood started to grow its roots as a musical destination in the 1920s, hosting blues and jazz legends such as Robert Johnson, Huddie "Leadbelly" Ledbetter, Blind Willie Johnson and Bessie Smith. Deep Ellum's status as a community canvas for creatives in a variety of media continued to take different shapes through the decades — like its momentum as a major host to the punk movement in the 1980s. Liles suggests that artifacts connected to notable musicians like New Bohemians guitarist Kenny Withrow, whose group started developing its sound in Deep Ellum, should be included.

"It's the beginning of the music scene down there," Liles says. "It's basically an empty warehouse district. The kids who came down were all from the suburbs. It was kind of like their place to hide from their parents or school crew."

Bywaters says finding historical artifacts worthy of preservation isn't as daunting a challenge as it might seem. Some important pieces can be found in places you might not expect.

"eBay is a pretty amazing place, and if somebody's got a budget, stuff shows up," Bywaters says. "Someone might step up and say, 'Oh, my grandfather's business was there and I've got this, this and this.'"
KEEP THE DALLAS OBSERVER FREE... Since we started the Dallas Observer, it has been defined as the free, independent voice of Dallas, and we'd like to keep it that way. With local media under siege, it's more important than ever for us to rally support behind funding our local journalism. You can help by participating in our "I Support" program, allowing us to keep offering readers access to our incisive coverage of local news, food and culture with no paywalls.
Make a one-time donation today for as little as $1.