Elton John said goodbye to North Texas with a final show at Globe Life Field. Bailey Orr
So, the first question you may be asking is, why?

Why is the Observer covering Elton John's final concert at Globe Life Field, when we covered the Farewell Yellow Brick Road Tour's first two shows the first time he came to town in 2018 and the next two shows at the same venue earlier this year. Not to mention the extensive coverage of the tour by way of lists of deep cuts and concert previews, whether he was coming to town, canceling the show due to COVID-19, coming to town again or yet again.

Well, besides the fact that it's Elton-freaking-John, Friday night's concert was the last time The Rocket Man will grace the stage of a North Texas venue. And while Houston and San Antonio will have their last chance to see John in late October and early November before he says goodbye to Texas forever, we thought it only right to see what Sir Elton had in store for his final tour through our region.

However, seeing Elton John's show three different times from three different perspectives offers us a chance to really dive into the magic that is an Elton John performance. Rather than focus on what songs he played (the setlist is widely publicized and, save for the addition of "Sorry Seems to Be the Hardest Word," hadn't changed from his last show in Dallas) or the elaborate set design (read the review from earlier this year if you're curious), we wanted to look at what has kept fans coming back again and again after six decades — before Pnau remixes, arenas, jumbotrons and teams of sound techs. After all, before he was Sir Elton Hercules John CH, CBE, before he was even "Elton John," Mr. Reginald Dwight was just a guy on piano.
click to enlarge 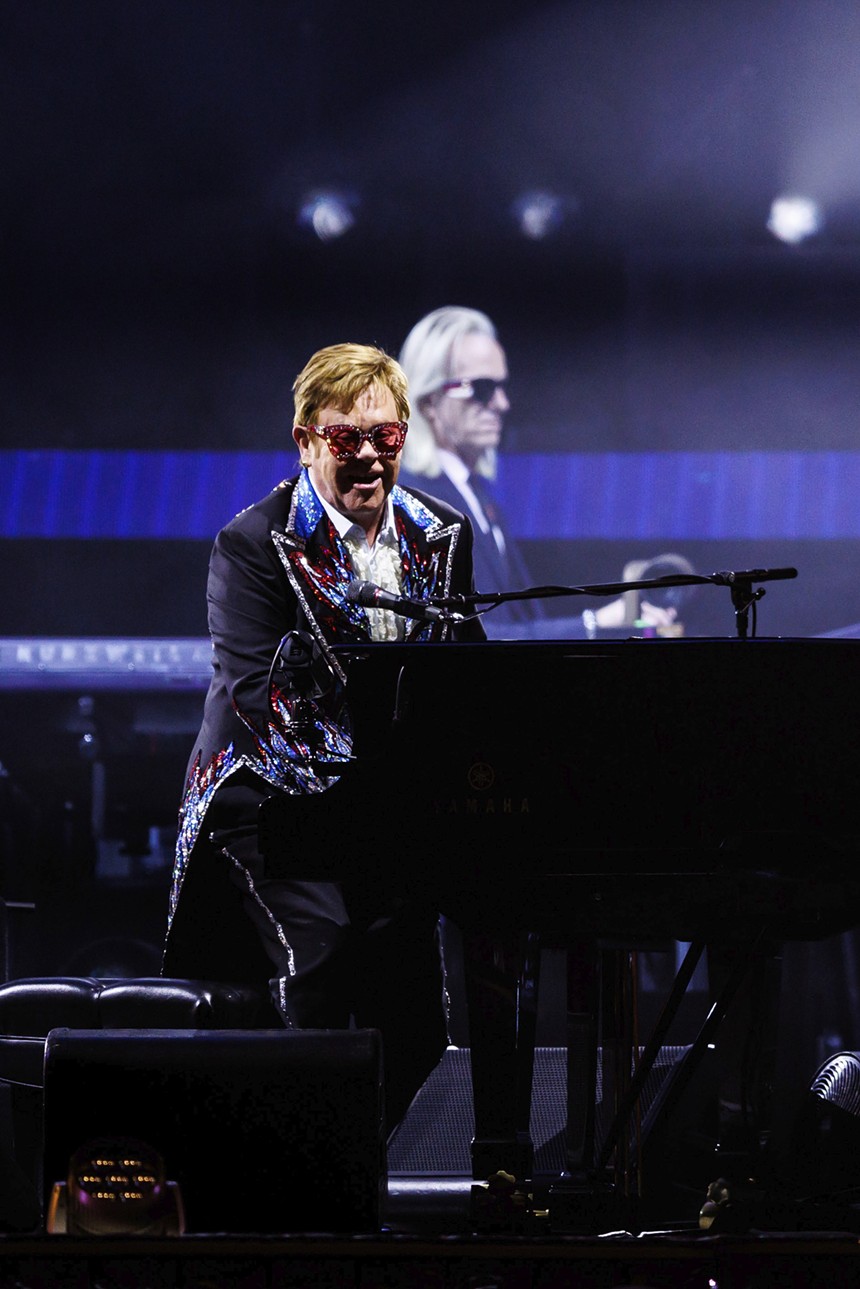 This is a review of how Elton John did as one of the greatest rock pianists to ever command the stage (apologies to John's former tour mate, Billy Joel).


Just a couple of songs into the night, John told the audience he had just tested negative for COVID after catching it once again in New York, and assured the audience that, while his voice may not be at 100%, he was “not missing tonight" like he did back in January "and not letting you down.” Ultimately, it would really affect only his high notes.

In front of familiar visuals and stage layout, John remained illuminated throughout the show while his band was glad to play in the shadow of the man in sequins.

For someone who has played virtually the same set for four years now, John sang each note with conviction, putting every molecule of air he had into each word as if this were the very last time he’d be playing at all.

As John played the familiar piano part of “Tiny Dancer,” one could make out the pianist glancing down at his fingers, making sure every note was played with precision.

However, when it was time for Davey Johnstone to take the lead guitar for “Have Mercy On the Criminal,” John faded gracefully into the background to keep the rhythm going on the piano.

And, of course, with the end of every song, John rose to his feet to blow kisses and wave to different sections of adoring fans from the front to the very back, at times having them compete for his attention by raising their voices. Sir Elton John went out on a high note on Friday.
Bailey Orr

John did a bit of showboating at the end of “Rocket Man,” demonstrating that he can still vamp and scat with the best of them, and the cameras were there with close-ups of the master’s fingers as they glided across the keys of his Yamaha grand piano.

It’s worth noting that, while John played the show as if it were his first big show, his fans, too, sang along to every note as though they had been waiting a lifetime to see him. Even with the set list memorized, die-hards looked at each other with great anticipation, knowing the song they had come to hear would be next.

John appeared breathless at the end of a staggering, extended version of “Levon” only to rise to his feet again and flex his arms for the audience before playing “Candle in the Wind” as his piano moved about the stage and the band behind him disappeared. After the song, John himself disappeared for a trademark costume change — still in sequins, but trading his black coat for pink.

Elton John is the ultimate showman, and his final show in North Texas proved to be the most compelling of the five he has performed here on his final tour.

The venue made no difference, nor did the fans or the band. What made the show most compelling was knowing that while this may be the last time we see Elton before the tour concludes next summer, he is going to fight through whatever tries to take him down.

Elton John really is still standing after all this time, and he will be long after he says goodbye. Elton John played five North Texas shows in his last tour, and packed stadiums each time.
Bailey Orr
KEEP THE DALLAS OBSERVER FREE... Since we started the Dallas Observer, it has been defined as the free, independent voice of Dallas, and we'd like to keep it that way. With local media under siege, it's more important than ever for us to rally support behind funding our local journalism. You can help by participating in our "I Support" program, allowing us to keep offering readers access to our incisive coverage of local news, food and culture with no paywalls.
Make a one-time donation today for as little as $1.