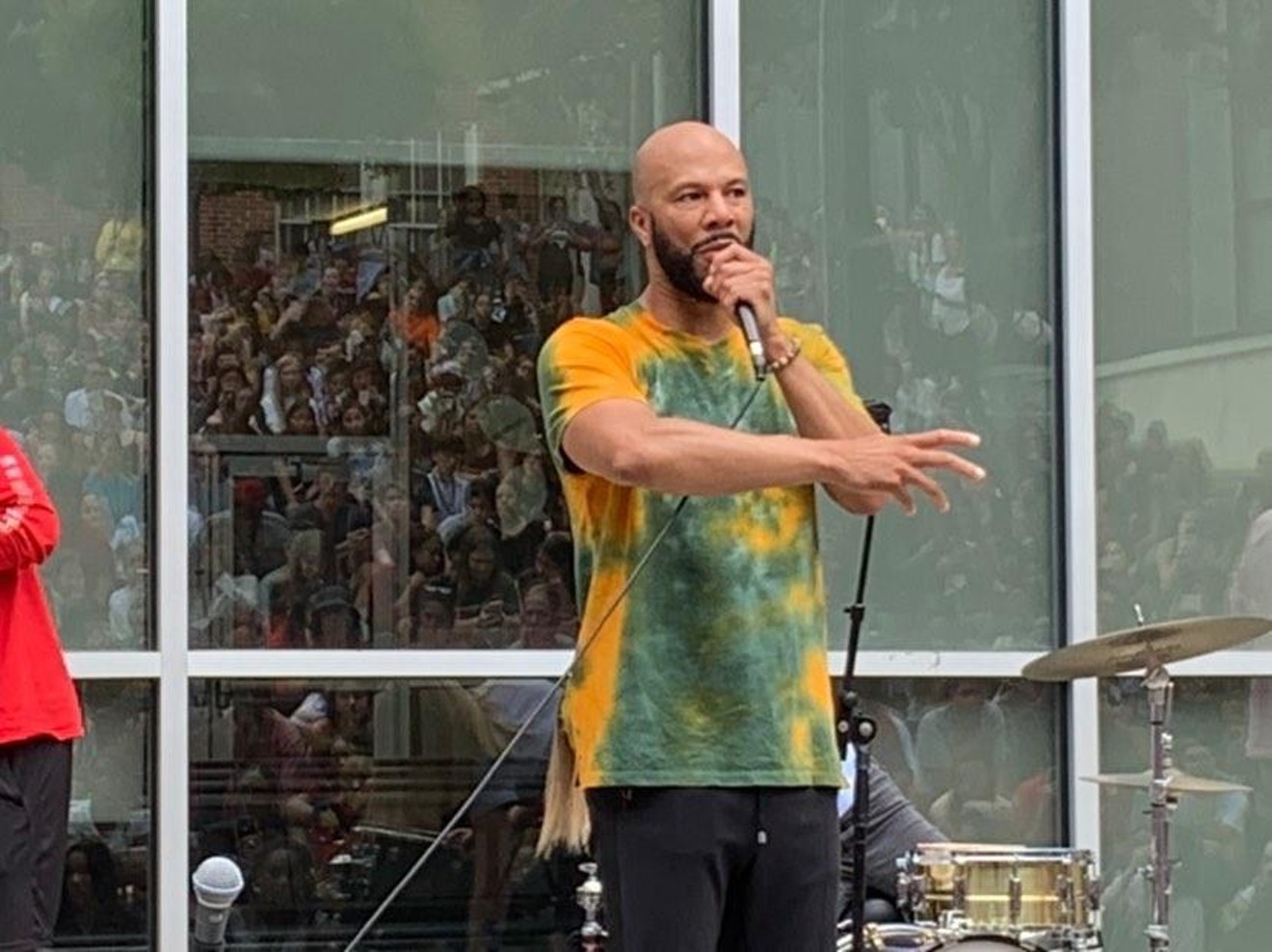 Rapper Common paid a visit to Booker T. Washington High School in Dallas to motivate the students. Ja'Von Mitchell
With summer in the books, Booker T. Washington High School for the Performing and Visual Arts found a way to negate the bittersweet feeling of starting classes again. Dallas music legend and 1989 Booker T. graduate Erykah Badu stepped back on her old campus with one goal in mind: to motivate and inspire the younger generation of artists.

Badu’s presence was enough to inspire the youth, but the singer's longtime friend and rapper Common also tagged along on the visit and played the role of a motivational speaker to the students. He and Badu used to date years ago and have maintained a professional relationship in the music industry.

Badu’s sister, Koryan Wright, who works at the high school, helped lead a Q&A session, in which students got to ask Common and Badu questions. Sophomore Jaden Mitchell said, “He touched me when he talked about being on a journey in life. But I also loved the way he talked about his relationship with God.” Badu and Common did perform a splash of tunes with a band made up of Booker T. students. But the day wasn’t focused around music. It was about youth development.

He talked about how he found his purpose early in his love for hip-hop and even spit about 12 bars from the first verse he had ever written at the age of 12. “I wrote my first rap just because I loved to rhyme. I loved hip-hop culture and I loved what writing brought,” Common said.

He shared stories of some of the failures he had along this journey, and it displayed a human element to the students that celebrities rarely share with the public. “Without struggle there is no progress,” he said. Common recalled the time he was turned down for his first movie role and was faced with the same choice that the young Booker T. students will have to face at some point in their lives: The choice to either give up or decide to get better. He told the students that he then auditioned for Smokin’ Aces and "killed it."

He then went on to talk about the 2006 Grammy Awards and how he was nominated for five awards that year. He had written three different speeches in anticipation of a presumed victory in at least two categories. But he didn’t take home any hardware that year.

Common said he was discouraged, but the next day he got back in the studio and straight to work. He returned to the Grammys in 2007 and won an award for a song he said he didn’t expect to win one for. There were lessons to be learned in his stories, Common said.

“I bring this to you because you are going to be challenged," he said. "And even when you get to certain levels and think everything is going to always be great, it is not.”

The main message to the students is to enjoy their journey. Take your failures and learn from them. “I am encouraging each and every one of you to take your purpose and believe in your path," he said. "Live that path so it shines on the world in the greatest way."
KEEP THE DALLAS OBSERVER FREE... Since we started the Dallas Observer, it has been defined as the free, independent voice of Dallas, and we'd like to keep it that way. With local media under siege, it's more important than ever for us to rally support behind funding our local journalism. You can help by participating in our "I Support" program, allowing us to keep offering readers access to our incisive coverage of local news, food and culture with no paywalls.
Make a one-time donation today for as little as $1.