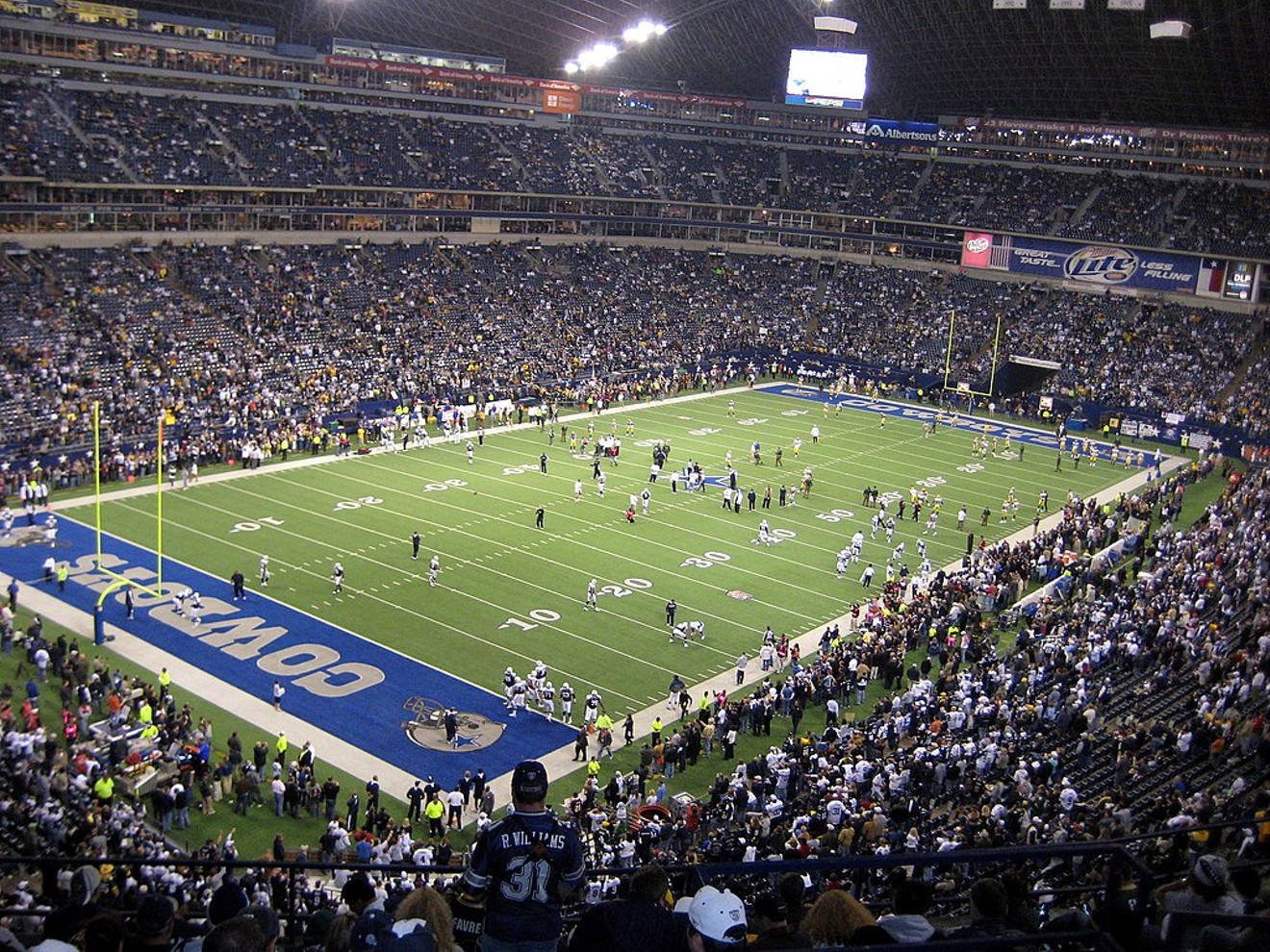 You're probably wondering who the trumpet player is for the Cowboys. grantlairdjr, CC BY 2.0, via Wikimedia Commons

Trumpet player Freddie Jones makes the word "casually" seem too studious an adjective. He sits inside a coffee house in Carrollton, cutting off golden, flaky morsels of apple pie as he remembers getting a call from the Dallas Cowboys. A trumpet player by trade, Jones plays the national anthem before each of the team's home games at AT&T Stadium. He's the first person in seven years to earn that privilege on an exclusive basis.

See also: Smack Yourself Into Shape for Freddie Jones Jazz Group at the DMA

Jones, a native of Memphis, Tennessee, a city rooted in a vibrant history of rhythm and blues, has been playing trumpet at a professional level since the age of 15. The band he started at the age of 13 stayed together throughout high school, playing Catholic jazz mass at church on Sundays, and whatever they could get their hands on over the weekends.

"I just wanted to play it with no tricks. And it's fun," Jones explains of his gig with the Cowboys. "I didn't wake up one morning and go, 'Oh my god, how cool would it be to play the national anthem?' Nah, I didn't do that. It was the last thing I would think I was gonna be doing."

His attachment to the trumpet, his musical weapon of choice, has never wavered. For Jones, there could be no reason to ever consider a different instrument.

"I didn't know there was another instrument. Is there another instrument?" he asks, in a serious tone. "Seriously, my mom bought me a trumpet; by my junior year in high school I bought myself a new one from playing. I never thought about it all."

Jones recounts his early days and at the mere mention of his roots, he always ends it with the same sentiment: "No, I like playing trumpet."

A Dallas resident since 1983, Jones graduated from the University of North Texas with a degree in jazz studies, at which point he was somewhat forced to take up another instrument besides the trumpet. "I played bass. When you go to college, you have that secondary instrument. So somebody made me do it," says Jones with a laugh.

Jones is dressed in a slick, dark suit, and his thin dreads maintain a subtle sway as he laughs and shares his stories. He has an impressive knowledge of world music, but he also admits he is a fan of pop music contemporaries such as Bjork, Lorde and Mos Def, the only hip-hop artist he truly enjoys. His conversation is composed and thoroughly interesting as he describes his history with the Dallas Cowboys.

Tommy Loy was the first trumpet soloist to helm the national anthem duties for the Dallas Cowboys, and did so for an impressive 22 years. After his death seven years ago, the tradition ended. And perhaps it was the subsequent soloists and singers that filled those shoes, but the national anthem became vocalized, and the audiences eventually stopped singing along.

"That was the original intent. It was to get the people to sing the national anthem again," explains Jones. "When they have someone singing the anthem, you're either quiet and you listen, or you laugh."

A call was made to local producers who then submitted the names of 10 trumpet players, including Jones, to be considered for auditions for filling that vacant solo brass section, a lost tradition after seven years.

"I was so nervous about doing it I left my mouthpiece at home, and had to borrow somebody's mouthpiece. That's pretty funny," says Jones, chuckling. "I was like, 'Do I really want to do this?'"

As someone with a resume that would impress any musician, critic or anyone within earshot of his performances, Jones easily won over the producers. He's since been the official national anthem soloist for every home game this season.

"I enjoy it quite a bit. I enjoy it more because all my family lives in Memphis. So that Monday night game that they did, you know, everybody in my family could see me play, which was cool," says Jones. "How many does a stadium hold, 80,000? Something like that? So you know, that's kind of cool, because it was packed."

Whether it's a capacity stadium bursting with the subtle energy of an aircraft carrier, or a regular gig around town, Jones feels equal amounts of pressure.

"Every time I pick up my horn I get nervous," explains Jones. "Because, (with) the trumpet you gotta be conscious of a lot of things. You know, it's really, can you imagine, it's just wind and metal."

The first game Jones performed, he was welcomed with a ceremony of grandiose proportions. Tommy Loy's daughter was even present. But it was at the second game where Jones was truly welcomed, as he could hear his name being chanted from within the tunnel. As it so happened, a woman who was running for a local office texted her constituents before the game about Jones, thus sparking his cheering section that would continue on to the end of his performance, much to his dismay.

"That Monday night game had 16 million viewers around the world. That's a lot of people," says Jones, rather nonchalantly. "I mean, I didn't see them. All I can see is the end of my trumpet. We know what each other look like."

When Jones is not leading "The Star-Spangled Banner," his horn exploits have been an impressive mainstay throughout Dallas' long-standing jazz traditions. He's finishing up two recordings, one of which will be a Christmas CD he hopes to be released December 15. He's performed with such artists as the Texas Gypsies and has participated in several jazz festivals within the last year alone. He also founded Trumpets4Kids, a foundation that provides trumpets to students that apply and who are unable to afford them.

"The trumpet is not an easy instrument to play, so you got to practice," Jones explains. "So we sign an agreement with the kids. Not with their parents or with the school, but with the person. And nine times out of 10, when you give somebody that kind of responsibility they usually do it. Because it's for them, so that's why we do it, and it's worked so far."

It may seem every breath Jones takes is either spent sounding through his trumpet, or working to get to play it more. His influence is now resonating through a new generation of trumpet players through his foundation, and at the slightest suggestion that his hard work and tireless efforts make quite an impression, he still insists otherwise.

"You just gotta keep on 'em," Jones humbly maintains. "Got to eat, you know. You got to do all the music you can do. I'm trying. I play trumpet."

50 Signs You've Been Partying Too Long in Denton Florida Georgia Line Danced on the Grave of Country at Gexa on Saturday What Your Favorite North Texas Band Says About You Does Dallas Want Its Own Austin City Limits? The Best Places in Dallas to Go When You're Stoned

KEEP THE DALLAS OBSERVER FREE... Since we started the Dallas Observer, it has been defined as the free, independent voice of Dallas, and we'd like to keep it that way. With local media under siege, it's more important than ever for us to rally support behind funding our local journalism. You can help by participating in our "I Support" program, allowing us to keep offering readers access to our incisive coverage of local news, food and culture with no paywalls.
Make a one-time donation today for as little as $1.
Aaron Ortega
Contact: Aaron Ortega