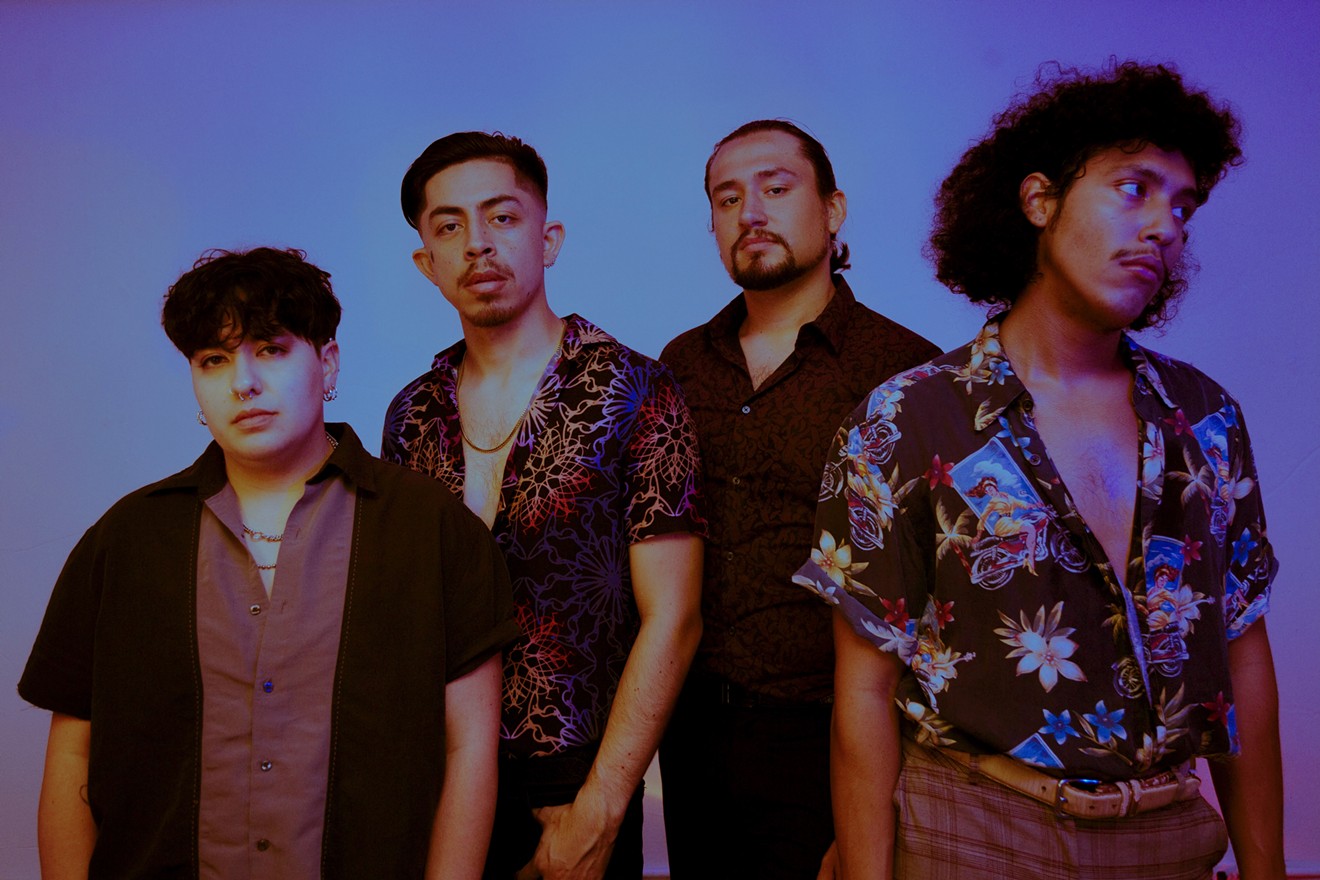 Dallas band Luna Luna is blossoming with its new album Flower Moon. Ash Rosas
It’s been two years since Dallas-based Luna Luna last released an EP. And what a two years it’s been. You know the story by now: The pandemic caused venues around the nation to shutter, and shows and festivals across the country to be canceled, upending the everyday routine of every band everywhere. One of the first major festivals cancelled due to COVID-19 was SXSW, where Luna Luna was scheduled to perform.

“Pretty much all our live performances for the year went off the rails,” says Kevin “Kavvi” Gonzalez, the band's vocalist and co-producer. “But it did provide us the time to really work on the songs more and not have to have to be bouncing from city to city so much, so we could actually get together pretty often and put together this project that we’re going to come out with.”

The four-member Latinx band is dropping Flower Moon, its first full-length album, on August 13. It's the group's first album released with Los Angeles-based distribution label Independent. The record bears the stamp of the pandemic and a new production process, but is still quintessentially Luna Luna — lush, dreamy, poppy, dramatic, crooning.

According to Kavvi, Flower Moon is an evolved version of the band’s two previous EPs, For Lovers Only and Carousel — in the same family, sonically speaking, but longer, better executed and more personal.

“This is the first time we are releasing music with someone behind us,” Kavvi says. “We had to work with a deadline, and that was kind of different. Because before we were just dropping whenever we wanted to drop.”

“As far as the music, I think it’s a bit more personal,” he continues. “I think the other albums had more general lines. But this one, we got a little bit more personal, for sure. I think maybe that came through because of COVID and everything. Maybe you’re more in touch with your emotions at the time. Like, being isolated and being alone, you really get to feel what you’re actually feeling.”

Flower Moon came together through a combination of organic growth and methodical craftsmanship. Some of the songs on the album were written during the long months of quarantine and isolation. Others — such as “Call Me Up” and “A Different Color Doesn’t Stay,” both lush, mellow, low-key bops — were crafted in a day.

“We’re always just making music,” says Danny Bonilla, who sings, plays the keys and co-produces. “I don’t think there’s ever a time where we’re not just thinking about songs. Like, even in public, Kavvi will come out with his phone and record something. So, it’s a lifestyle … I guess over time we stockpiled these songs and we were like, ‘Alright, let’s drop a project.’”

“There’s not many times where we just didn’t know what was going to happen going into a studio session and we just make a song in that one day,” Bonilla says. “We did that twice [for Flower Moon]. That’s not something we usually do. But I think that’s a testament to our growth, and who we’re becoming and where we’re going as musicians.”

"We got a little bit more personal, for sure. I think maybe that came through because of COVID and everything. Maybe you’re more in touch with your emotions at the time." – Luna Luna Kevin “Kavvi” Gonzalez

Luna Luna collaborated with Dallas-based rapper and producer Dustin Cavazos to produce Flower Moon. But Kavvi, Bonilla, drummer Kaylin Martinez and bassist and backup vocalist Ryan Gordon are the nucleus of the project.

Starting in November, Luna Luna will take their show on the road, traveling across Texas, throughout the Southwest and around the West Coast for their Flower Moon Tour. They play in Dallas on December 14. The band members are ecstatic to start touring again.

“We had a little mini three-day tour, just to get our feet wet after a long time,” Gordon says of touring states such as Kansas and Missouri. "It was really cool just being able to get out there and [tour] again after so long of not doing it. We’re definitely itching to go back out … We’re ready just to take it on.”
KEEP THE DALLAS OBSERVER FREE... Since we started the Dallas Observer, it has been defined as the free, independent voice of Dallas, and we'd like to keep it that way. With local media under siege, it's more important than ever for us to rally support behind funding our local journalism. You can help by participating in our "I Support" program, allowing us to keep offering readers access to our incisive coverage of local news, food and culture with no paywalls.
Make a one-time donation today for as little as $1.