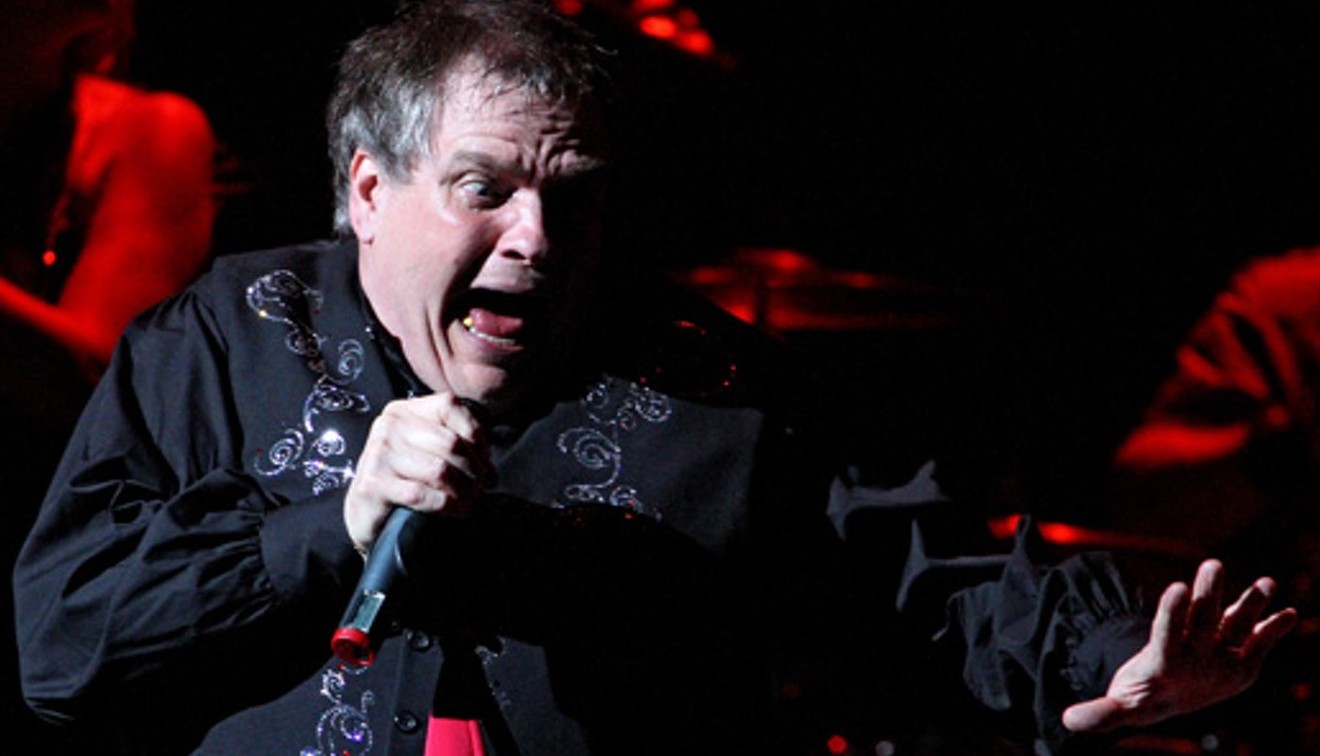 Meat Loaf performing at Dallas' House of Blues in 2010. The singer died on Thursday at age 74. Rachel Parker
There can never be another Meat Loaf.

The artist, who was born in Dallas in 1947 as Marvin Lee Aday and died Thursday at the age of 74, was a singular cultural icon whose talents ranged wide but shined brightest in his own artistry. If you live in the United States, there’s a 1-in-20 chance that at his moment, there’s a copy of some form of Bat Out of Hell in your music collection. That album, the fourth best-selling of all-time, is a monument to Meat Loaf’s unique approach to inhabiting any performative medium.

Unlike some other all-time best-selling albums like Fleetwood Mac’s Rumours or Pink Floyd’s Dark Side of the Moon, Bat Out of Hell is sort of trapped in its own ambition. Its artwork does not adorn T-shirts and college dorm rooms, nor have album's songs gained new life through TikTok. Meat Loaf often gets relegated to the status of one-album wonder, a blatant falsehood proven through a zoomed-out glance at his work as a singer, actor and stage performer. He held an extraordinary aptitude in nearly every facet of his career.

Meat Loaf was not a songwriter; most of his material was either composed by others or drawn from the contemporary rock songbook (see his gorgeous take on “California Dreamin’” from 2012’s Hell in a Handbasket), but he was still able to wrench blood from a stone with his operatic tenor, something that will undoubtedly be the focus of many a Meat Loaf obituary. If anything, his voice was a tool to facilitate his attitude toward rock ‘n’ roll and performing in general: Have fun, don’t take it too seriously, but don’t treat it as a joke either.

If there’s anything that is entirely unique to Meatloaf, it’s the essence of rock ‘n’ roll as a form of theater. He was part of the original Broadway cast of The Rocky Horror Show (and later reprised one of his two roles when the musical was adapted into a film as The Rocky Horror Picture Show) and was part of the original Los Angeles production of Hair. Cutting his teeth in live theater added a bombastic flair to his stage persona that fit well when he befriended songwriter Jim Steinman after starring in one of Steinman’s musicals. The duo eventually decided to commit to music and put their heads together to make a record.

Steinman, who died in April 2021, had taken Bruce Springsteen’s fist-clenched songwriting ambitions and ran with them, writing songs that could only be brought to life by Meat Loaf’s voice and stage presence.
While shopping around for record labels, Meat Loaf was constantly lauded for his vocals but asked to jettison Steinman, whose songs were considered too goofy for the "serious" musical landscape of the mid-'70s. Meat Loaf stood by his friend and was eventually able to cut a record with the help of producer Todd Rundgren.

Rundgren initially took on the project facetiously, recalling in Paul Meyers’ book A Wizard A True Star: “…the songs were just so comically over the top that I didn’t see it as a rip-off [of Springsteen]; it just seemed more like parody.” Eventually, the team gelled, with Rundgren bringing in The E Street Band members Roy Bittan and Max Weinberg on keys and drums, respectively, to increase a sense of musical earnestness, while bringing in his own Utopia bandmates Kasim Sulton, Roger Powell and Willie Wilcox for levity. Rundgren also ended up playing all the guitar parts on Bat Out of Hell.

The result was a commercial smash and a critical shrug. After a period of limbo in which Meat Loaf lost his voice to exhaustion from touring and drug use, label interest faded and his and Steinman’s subsequent projects went relatively unnoticed. Steinman penned hits for other artists, including Bonnie Tyler’s “Total Eclipse of the Heart,” while Meat Loaf ventured into acting with a starring role in the 1980 cult comedy Roadie featuring Alice Cooper and Deborah Harry.

Despite the commercially hit-or-miss nature of Meat Loaf’s other projects, his commitment to tongue-in-cheek levity was always present. See the film Black Dog, in which Meat Loaf plays the villain to Patrick Swayze’s truck-driving hero and compare that with his 90-second role in Wayne’s World as a bouncer. For Meat Loaf, any role, on stage or on camera, was an opportunity to exhibit that essence of rock ‘n’ roll theater.

At the risk of sounding like Dr. Strangelove’s Gen. Jack D. Ripper, that essence is epitomized on the chorus of “You Took the Words Right Out of My Mouth (Hot Summer Night)” when, Meat Loaf shouts “You know there’s not another moment, Not Another Moment! NOT ANOTHER MOMENT TO WASTE!” It’s easy to give credit to composer Steinman or producer Rundgren for making that moment work — bells, chorus and all — but place that song in the mouth of another vocalist, no matter how skilled, and the result is either laughably over-the-top or uninspired.

Steinman or Rundgren were not the "heart" of Bat Out of Hell — that title belongs solely to Meat Loaf.  Rundgren has made dozens of records, many of which flash a facetious set of teeth without cracking a laugh, but none of them have that sense of earnest desperation that launches from Meat Loaf’s throat. Steinman made records on his own, with the same knife-edge wit carried on his songs on Bat, but none of them come close to carrying the weight the way Meat Loaf did. Try singing “We were glowing like the metal on the edge of a knife” and sounding as sexy as Meat Loaf. It’s impossible.

In that sense, the essence of the album was, and always will be, Meat Loaf’s. His subsequent records may have lacked Steinman’s turn of phrase, Rundgren’s gilded touch, or The E Street Band and Utopia’s instrumental finesse, but they always had that larger-than-life bombast that was in fact, the exact  amount of life needed. Nobody has ever been able to replicate the unique crosshatching of camp and sincerity that Meat Loaf channels on Bat Out of Hell.

Not even Springsteen, the main sonic inspiration for Bat Out of Hell, was able to recreate Meat Loaf’s spirit. The Boss’s MO was to depict pure, youthful desperation and escape in the face of societal pressure. His stories were dramas, not melodramas. There’s no skull-gazing or soliloquizing on a record like Nebraska. For Springsteen, life was too serious. For Meat Loaf, life was only as serious as the manner in which he sang a song.

Funnily, the melodrama that Meat Loaf telegraphed on Bat Out of Hell in 1977 became the template for the specific type of power ballad that populated radio at the twilight of the '80s and the wee hours of the '90s —Not the "rock" power ballads of MTV’s heyday, but rather the pop ballads that now exist solely in Time Life informercials, post-“Total Eclipse of the Heart” and pre-“How Am I Supposed to Live Without You.” Even then, there’s a lack of earnestness in those ballads that Meat Loaf had a surplus of in his own music. It’s appropriate that Meat Loaf’s second biggest commercial success was a sequel in 1993 called Bat Out of Hell II: Back Into Hell with the number-one smash hit single “I’d Do Anything for Love (But I Won’t Do That).”

It brings just a mile-wide grin of pure satisfaction to think of the song, whose title is silly enough to make you chuckle but is sincere enough that when you listen to the record, there’s not a chuckle to be found.
That is what made Meat Loaf a singular artist — his defining ability to cultivate a sensibility no matter what material he was given. This is the guy who in a span of only two years was able to play both a grieving cancer patient-turned underground fighter-turned radical terrorist in David Fincher’s Fight Club and played the Spice Girls’ tour bus driver in their schlock-fest motion picture Spice World in which he makes a show-stopping joke about one of his own songs. Amazing.

None of the other stadium-filling acts of the '70s and '80s were able to do what Meat Loaf did: offer the youthful thrill of getting lucky, the terrifying excitement of driving too fast into an unknown future. Queen was too populist, Springsteen was too genuine, Madonna was too sexy, Michael Bolton was too weepy.  Only Meat Loaf could find paradise by the dashboard light.
KEEP THE DALLAS OBSERVER FREE... Since we started the Dallas Observer, it has been defined as the free, independent voice of Dallas, and we'd like to keep it that way. With local media under siege, it's more important than ever for us to rally support behind funding our local journalism. You can help by participating in our "I Support" program, allowing us to keep offering readers access to our incisive coverage of local news, food and culture with no paywalls.
Make a one-time donation today for as little as $1.