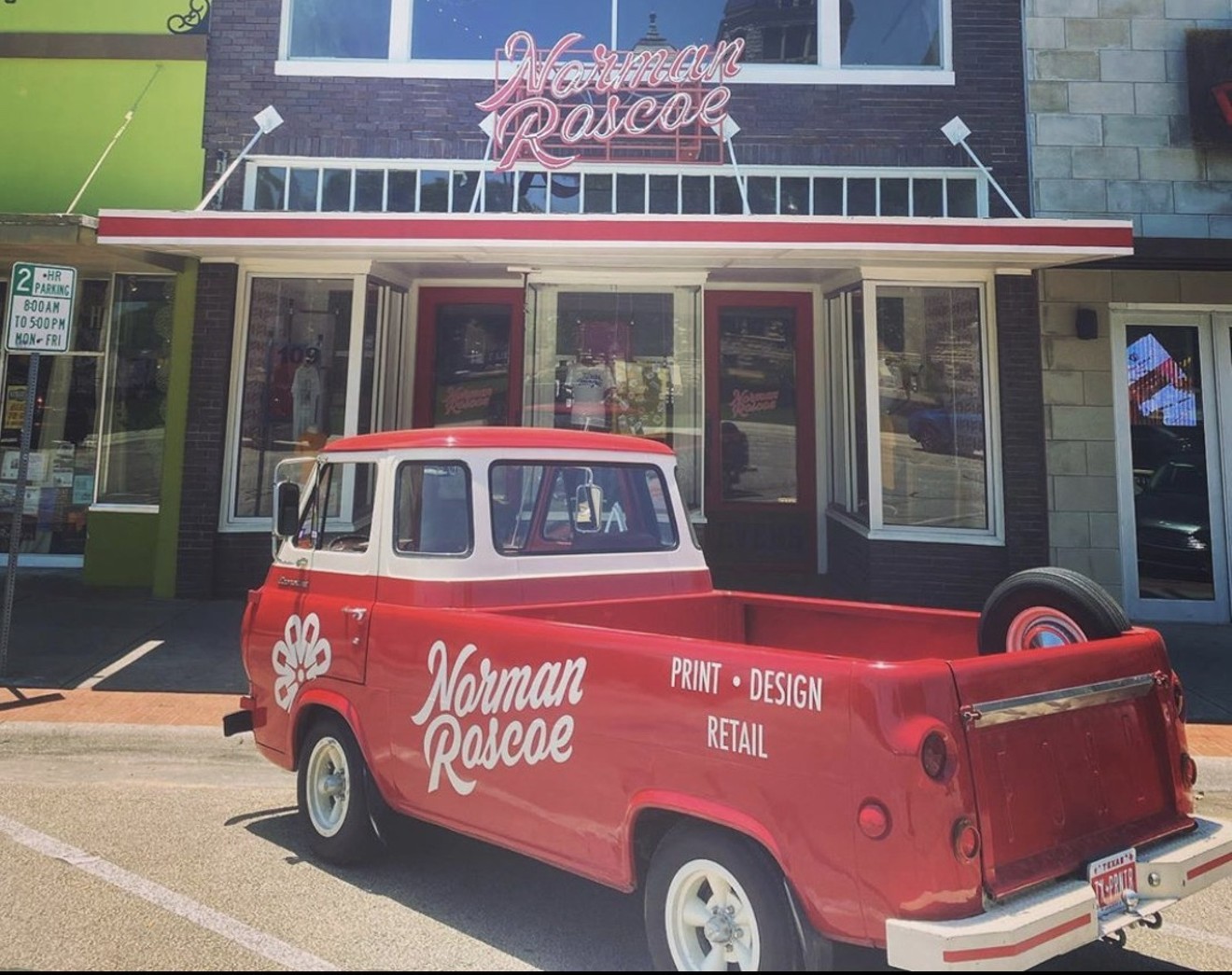 The Denton shop owned by Midlake's Eric Pulido and Ranger Ewing has been a great neighbor. Ranger Ewing
Eric Pulido and Ranger Ewing knew years ago they wanted to go into business together, even if it was just in a dimly lit garage for several hours a day. It would still mean time spent outside of their then full-time jobs elsewhere. Today, though, they’re thankful for more light and more space. Pulido, the Midlake frontman, and his college buddy Ewing run Denton’s favorite “friendly neighborhood” screen-printing company complete with a retail store selling shirts, stickers and décor.

But the times, they have changed, and what makes their shop, Norman Roscoe, unique is not just its hyper-local knick-knacks and collaborations with local and mainstream artists, but its ability and willingness the past several months to help other small, local businesses receive some much needed moola to help keep their own doors open.

“We want to help, and we want to keep our lights on too,” Ewing says. Turns out, karma pays. The friends’ initiative to help others has helped their own business too.

Pulido and Ewing are good friends who go way back to their college days at Texas A&M in the late ’90s. The pair moved to New York together in the early aughts for about a year, before moseying back to Texas. Ewing opened a vintage attire shop in College Station called North Gate Vintage, and later owned a second store on Denton’s downtown square for a while. Those shops mainly sold quality soft fabric T-shirts with vintage 1970s and ’80s designs. It’s during that time that, Ewing says, he knew he wanted to brand his own tees. He’s always looked back for inspiration, not ahead. He says nostalgia is what got him into this whole screen-printing biz to begin with.

“As much as we can, we try to replicate the things we love that pushed us into what we’re doing today,” he says. “We love vintage culture.”

Pulido eventually persuaded Ewing to move to Denton, where the two spent what should have been their sleeping hours working on small screen-printing projects in Pulido’s basement, and eventually in Ewing’s garage. They churned along, screen-printing designs as a hobby, eventually printing a couple hundred shirts for Midlake’s European tour — the second time the duo printed designs for Pulido’s band. That’s when it hit.

“This time it felt more like the genesis of a business,” Ewing says. The two then officially started their company, Norman Roscoe, a name derived from the two friends’ dogs, Norman and Roscoe (an idea credited to Ewing’s wife, Megan).

The flagship store, inside the two-story, historical Evers Hardware building on Denton’s downtown square, has been operating for a handful of years. Before that, in 2014, they moved into a fully functional warehouse, which they recently moved inside the downtown shop. Customers can now see exactly how the shirts get made, something that, Ewing jokes, attracts “a lot of kids and old guys.”

“You see retail products that we sell, but you look through the looking glass, literally, and you can see the making of it,” Pulido says. “It tells the story of where the products come from.” Norman Roscoe’s shirt and sticker designs range from throwback ’80s styles to their original Texas-centric series of designs, Texas Tee House, and other comedic pieces like “I Hate 35” (Interstate 35, that is).

And it feels a lot like a family-run business. Pulido’s wife, Kristen, maintains picturesque storefront displays, and you’ll notice their beautiful, red 1961 Ford Econoline sitting out front on most days. (Yes, it works, they use it to deliver orders to locals. No A/C, though). They’ve got a modest staff who always give a friendly “hello” as you walk in the doors. You could say that Norman Roscoe looks a lot like a Norman Rockwell painting. And it feels just as inviting.

The screen-printing company has also been a relatively successful business during its time. But like most small, local businesses, the past several months during the COVID-19 pandemic have been tough. They depend on events, artists and other local businesses for their own success. Once the lockdown began earlier this year, “all orders were halted,” Ewing says. They had a lineup of orders for church events and South by Southwest, among other things. But instead of closing up shop for the time being, they thought, why not help out some other folks?

“We thought we’d team up and partner with others on an effort for a bigger picture,” Pulido says.

So, they began their Give Back series. Norman Roscoe teamed up with other staple local businesses, like Dan’s Silverleaf, Oak Street Drafthouse, West Oak Coffee Bar and others to help raise money for them through T-Shirts. Pick the shirt, the size and the business you want to support in the dropdown menu on their website under “Give Back,” and $10 goes to the business of your choice. They’ve also teamed up with artists including Shakey Graves, John Paul White, Grandaddy, Sarah Jaffe, Nicole Atkins, Rufus Wainwright, Wild Child, Alejandro Escovedo and others as part of the series.

Pulido and Ewing started the Give Back series in late March and in the first month raised almost $60,000 for 30 local businesses. The second month, they raised another $60,000. Pulido adds that they have also worked with artists who had designs made for their touring merchandise for this year but no longer thought they had a reason to print them. Pulido says he’s glad they have been able to connect these artists with their fans through their screen-printed shirts and help the artists out financially along the way. The company has also seen financial success they likely otherwise would’ve missed, and was even able to hire on a new employee to help fulfill the charitable orders. Goes to show, nice guys don’t have to finish last.

And that’s not where Norman Roscoe’s charitable efforts end. Amid today's Black Lives Matter movement, they’ve also teamed up with Portland artist and friend Laura Veirs who, along with her son Oz and poet friend Anis, helped create the “Black Lives Rule” shirt sold on Norman Roscoe’s website. All proceeds from sales of the T-Shirt, embellished with a design of three unique flowers, goes to social justice groups in Portland.

“This community has really tried to get on the other side of this,” Pulido says of the pandemic. “It’s cool to see our little family pulling together, keeping positive and hopeful.” For now, Norman Roscoe’s shop is open Monday through Friday, 9 a.m.-5 p.m., and their website is always accepting orders.

As far as what they think makes Norman Roscoe unique, Ewing says, “We feel like things were just better in the older era. We wanted to nod to that era. Maybe expose somebody to something they may not be exposed to at other printers."
KEEP THE DALLAS OBSERVER FREE... Since we started the Dallas Observer, it has been defined as the free, independent voice of Dallas, and we'd like to keep it that way. With local media under siege, it's more important than ever for us to rally support behind funding our local journalism. You can help by participating in our "I Support" program, allowing us to keep offering readers access to our incisive coverage of local news, food and culture with no paywalls.
Make a one-time donation today for as little as $1.