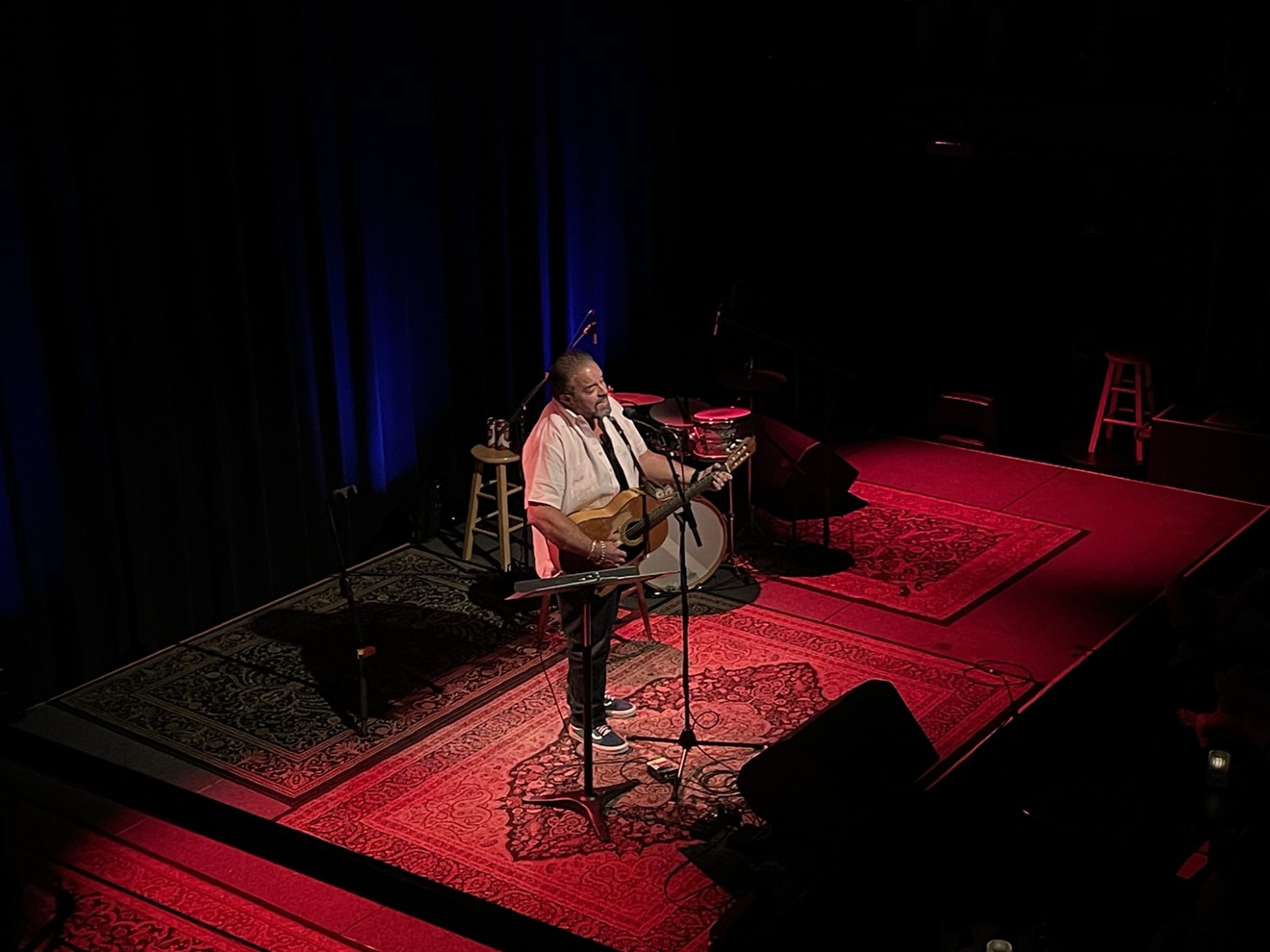 Raul Malo was a lone maverick on Saturday night at the Kessler. Preston Jones
Perhaps it’s pointing out the glaringly obvious, but the energy at a Raul Malo concert is markedly different than that of a Mavericks concert. But maybe it’s not so apparent, as Malo explained Saturday night during one of the many amusing asides over the course of his 112-minute set.

The 56-year-old singer-songwriter relayed an anecdote from a recent Virginia performance where, within Malo’s earshot, two attendees were complaining that Malo performing solo was not Malo with the Mavericks, the country band he fronts.

Adding insult to injury, the gripes extended to Malo’s insistence on playing several Spanish-language tunes in a row.

“If he plays one more song in Spanish, we’re out of here,” Malo said. Grinning widely, Malo launched into the same song he played Saturday — “Sabor a Mi” — and recalled watching as the ingrates “got up and got the hell out.”

The capacity crowd on hand at the Kessler Theater Saturday, for what’s becoming an annual appearance by Malo (he last appeared on the Oak Cliff venue’s stage in April 2021), roared its approval as Malo began playing the selection from En Español, the Mavericks’ masterful foray into Spanish-language songs.
Saturday’s performance was rich with that sort of intimacy, enabled by the proximity of performer to audience, giving the night the feeling of an evening among friends, the off-hand brilliance of a skilled musician in a cozier setting proving to be casually dazzling again and again.

Opening with “Make the World Go Away,” which Malo said, most days, was his default reaction to hearing the news, Malo spent the evening more or less assembling a set list on a whim, plucking whatever song caught his fancy from either the binder on the music stand before him, or from one of the many shouted suggestions emanating from all corners of the darkened room.

Malo’s son Dino joined him on drums for a satisfyingly loose rendition of Jimmie Dale Gilmore’s eternal “Dallas,” a tune Malo said he and his son had heard on Spotify in the car on the way to Saturday’s performance.

“We’ve never played the song before, ever,” Malo said, before cracking, “Plus, if we screw it up, who cares? We have your money already.”

The sight of father and son collaborating — Dino remained onstage for the duration of the main set, anchoring a modest drum kit and taking slugs from his Lone Star beer — was a moving one, particularly as Dino brought his own particular flavor to beloved Mavericks staples such as “Every Little Thing About You” or “Come Unto Me.”

That easy familial chemistry was just one more pleasurable undercurrent of Saturday’s showcase, anchored, as always, by Malo’s sonorous voice, the quality of which could make real estate listings come alive. It’s a bewitching instrument — one of the finest in the music business — and the opportunity to savor it in such a setting is one which should never be passed up.

“Music is the beautiful thing bringing us all together — look at this room. It’s so important when you leave here, take this energy out into the world — this country needs it.” – Raul Malo


And it was Malo’s voice — and the notion of a show’s energy — which brought everything full circle for the last song of the evening, amid an encore which was protracted purely based on the audience’s affection for his gifts. Malo, his guitar slung around his back, held in his hand a piece of paper, containing the lyrics to the Japanese composer Kyuu Sakamoto’s “Sukiyaki.”

“You’re taking in what’s going on in the world, and it’s hard to get up here and pretend nothing’s going on,” Malo began. “Music is the beautiful thing bringing us all together — look at this room. It’s so important when you leave here, take this energy out into the world — this country needs it.”

“Sukiyaki,” Malo explained, was written by Sakamoto in response to his home country becoming “unrecognizable” in the wake of World War II.

“In many ways, we’re becoming unrecognizable,” Malo said. “We need to heal the wounds that are wide open and gaping.”

With that, Malo, standing alone in the spotlight, performed a transcendent, acappella rendition of “Sukiyaki.” The aching sense of empathy and compassion in the words Malo sang needed no translation. It was, as had been all night long, a vivid display of the incandescent energy — whether backed by his Mavericks bandmates or standing solo Raul Malo brings to the world every time he opens his mouth to sing.

Equally pleasing was singer-songwriter Sunny Sweeney’s opening set, a too-brief collection of songs which showcased her rapier-sharp wit, open heart and fantastic voice. The Austin-based musician will be back in North Texas July 10 at Fort Worth Brewing, and fans of sophisticated, melodic country music would do well to seek her out.
KEEP THE DALLAS OBSERVER FREE... Since we started the Dallas Observer, it has been defined as the free, independent voice of Dallas, and we'd like to keep it that way. With local media under siege, it's more important than ever for us to rally support behind funding our local journalism. You can help by participating in our "I Support" program, allowing us to keep offering readers access to our incisive coverage of local news, food and culture with no paywalls.
Make a one-time donation today for as little as $1.