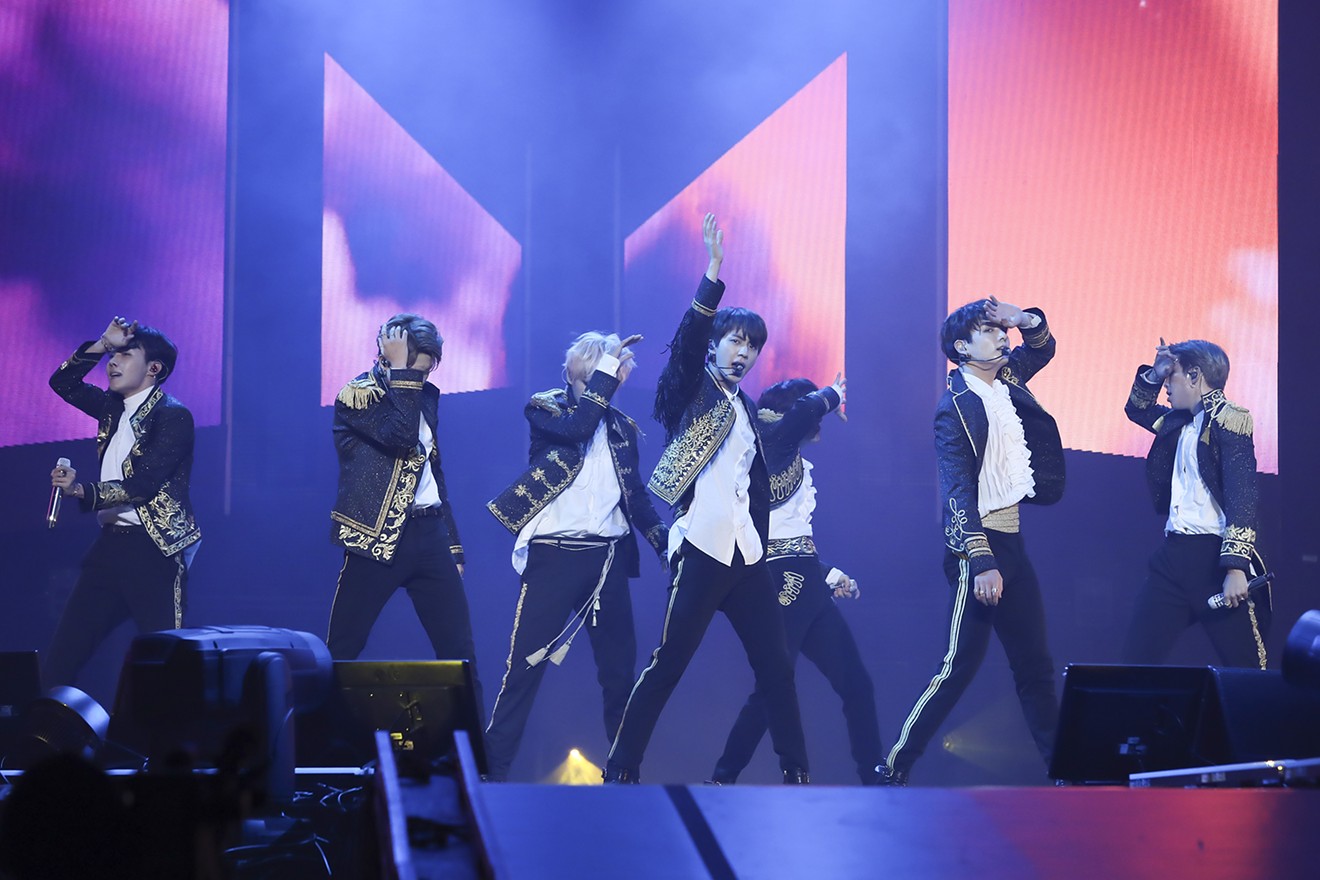 BTS performed in Fort Worth for the first time. Big Hit Entertainment


If boy bands have taught us anything, it's that well-rehearsed choreography set to pop music will always attract hordes of frenzied teenagers dubbed as fans. Such was the case when Korean pop band BTS hit the stage Saturday at the Fort Worth Convention Center, the first of two consecutive sold-out shows at the venue.

These two Texas shows were the only exclusives given to the state as part of BTS' ongoing Love Yourself world tour, which spans 33 dates and eight countries. The tour began Aug. 25, a day after the group released Love Yourself: Answer — the last installation of the Love Yourself album trilogy started in March 2016. Featuring guests like Nicki Minaj and Steve Aoki, the album incorporates elements of traditional Korean music and expressions mixed with modern music production that mold a unique sound — enough to result in commendable feats.

Since its release, Love Yourself: Answer has reached the Billboard 200 at No. 1 — the second time the K-Pop group has achieved this in 2018 alone — and sold 1,933,450 album copies the month of its release, according to Gaon Album Chart, a South Korean national chart. These accomplishments come as a result of support from a devoted fan base, self-labeled as ARMY — an acronym that stands for "Adorable Representative MC for Youth" — and worldwide critical and commercial praise. They were even once listed by Time magazine as one of the 25 most influential people on the internet.

Due to this international popularity, BTS shows tend to sell out less than an hour after tickets are publicly released. Having two or more performances per city might improve chances of attending, but nonetheless, the high demand for tickets and the rate at which they sell create fierce competition for first grabs. For reference, both Texas dates sold out within minutes when tickets were released in May.

BTS performed in Fort Worth for the first time.
Big Hit Entertainment

Because BTS is one of the most sought-after groups in the world, their tour merchandise also sells out quicker than expected. Unlike other acts who have an open booth inside a venue only hours before the concert, BTS' merchandise area opened at 10 a.m. for both shows. It was open not only to ticketholders but to the public as well, which guaranteed posters, shirts, bags and various miscellaneous exclusives would sell out.

By 8 a.m. on this sunny morning, lines for merchandise had already snaked multiple times next to the convention center's south side through to the Fort Worth Water Gardens. Groups of people could be seen playing BTS songs on their phones while waiting. One bystander commented to another that when she arrived at 5 a.m., there were already more than 500 people waiting in line. Some had camped the night before in spite of the discouragement from city officials and the Fort Worth Police Department.

Around the same time, the general admission line on the other side of the venue was likewise packed but less organized. People were left without specific directions for lining up and there were also some who cut in line, causing a few verbal brawls. Eventually, venue personnel took control of the situation by the time it started pouring rain, a few hours before show time.

Once inside, masses of people in their seats could already be heard singing along to BTS music videos projected on the stage screens before the concert. Many were practicing fan chants they had probably spent hours memorizing specifically for a live performance like this.

It should be noted that the Fort Worth Convention Center is not the biggest venue in the metroplex, holding roughly 13,500 seats, so it’s unknown whether staff was fully prepared for an extensive audience. In fact, its size incited a meme online between ARMYs once attendees shared photos of the place. Arenas usually tend to look bigger than they really are in photos, but that didn’t seem to adhere to this venue; rather, the opposite applied. The size actually looked larger in person and nevertheless still kept an intimate touch to the show.

y’all the fort worth convention center is small and comfy, but joke is on you boo boo the fools. those armys are gonna be so close to the boys. plus they’re probably just testing to see how well they do here in texas since they’ve never been here before. #BTSFortWorth


The fortworth arena is tiny as hell so I don't wanna hear no excuses for silence when yoongi busts his ass to seesaw, I wanna hear LOUD ASS FUCKING CHANTS FOR THE KING THAT DESERVES IT#BTS #BTSForthWorth

Me and intellectual: BITCH IM GONNA BE SO CLOSE AND PERSONAL WTH THEM! THE TINY VENUE WILL MAKE IT EVEN MORE BEAUTIFUL AND OUR CHANTS WILL BE LOUDER! #BTSFortWorth https://t.co/HGocPAAfTW


Prior to show time, the main stage held a tall, erected BTS logo in white lights and had a ramp that ran to another diamond-shaped stage placed at the center of the general admission area. The band would intermittently use the secondary stage all night.

As for the crowd, who excitedly waited for the show to begin, most carried an official BTS light stick, which looked more or less like a goblet with a full, clear sphere for a top. A video with instructions on how to synchronize the light stick with a phone prompted fans to activate the device quickly. A person’s ticket was to be scanned on an app that controlled the light stick so that it was configured to the specific seat on the ticket. Having done so meant that the light stick, when enabled to a "concert mode" feature, would virtually work as part of a complete lighting system along with other light sticks that were also connected. Throughout the crowd, the clear tops of all synched light sticks illuminated cascading rainbow patterns or rhythmic flashes to songs in the live set. They would be waved back and forth for the entirety of the concert.

A few minutes after 8 p.m., the BTS logo onstage opened horizontally like two doors, and BTS rose up from a floor trap in the main stage. There was a cumulative roar from fans. To describe the shrieks as noisy would be an understatement. The volume of the crowd was arguably louder than the music itself, relentlessly showering ear drums with unwanted vibrations. Some people were visibly concerned, which was seen when they placed a finger in their ears through all the yelling. However, unsafe decibels were not enough to stop the racket.

All seven members — RM, J-Hope, V, Jungkook, Jimin, Jin and Suga — showed off their urban dance skills when they went through the first song, “Idol.” Additional choreographers joined the septet outfit in the middle of the song, something they would do in other songs later on. Movement after movement, BTS and their performers reminded the audience that this was the result of hours upon hours of dedication to perfecting those routines, those smiles, the times to face the official cameras recording them and the moments to wave to the audience. Surprisingly enough, it all felt authentic — even after seeing the teleprompters with scripts situated onstage facing the band.


The audible nuisances of audience screams began to be forgotten once stage effects were used, such as small pyrotechnics displays and confetti launchers shot toward the crowd.


The audible nuisances of audience screams began to be forgotten once stage effects were used, such as small pyrotechnics displays and confetti launchers shot toward the crowd. The in-performance video projections onstage also shifted the attention to every member’s face with close-up angles as they danced passionately.

Once they finished “Idol,” BTS took some time to acknowledge the audience, introduce themselves and mention how excited they were to be in Fort Worth for the first time. Every chance they had between words to pause for breath was filled by unstoppable cheers from fans. It seemed like every time a band member muttered a word or moved a muscle, there would be waves of deafening screeches — and it didn't stop.

A few songs into the set, the first blackout occurred for a short interlude. A video popped up onscreen showing the group lighted in pop art colors, acting silly or smiling at the camera like actors would in an Old Navy commercial. This would happen a lot throughout the concerts for two reasons: to distract the crowd from costume changes and to introduce the next band members who would be doing their solo songs once the video was over. Each second of these videos also incited a plethora of screams.

It would be a while before the band made full use of the secondary stage. About 30 minutes into the show, song performances began to gradually move to the center once more outfits were given the spotlight. At center stage, the focus seemed to shift from appearances to full-group dance routines, though this didn't degrade the quality of BTS' performance. Fashion was still a priority, which their numerous dress changes supported, and each member’s image constantly sustained a delicate look.

In keeping with such image, a few band members took turns slightly lifting the bottom of their shirts when they danced to songs near the end of the set, which prompted the audience to deliver more high-pitched cries. History has shown that pop stars attract wider audiences when they revel in this behavior, and perhaps this was unintentional of BTS, but there was no denying that this evoked chill-producing reactions from repressed libidos all around. Following the steps of countless predecessors, BTS followed that ancient slogan ruling pop music: show it off but just enough to tease.

As with all transient experiences, the concert soon came to an end once confetti launchers shot the audience several times in celebration of a successful night. The seven singers stood on the center diamond stage, giving their last goodbye speeches. Some BTS members spoke their native Korean and had an announcer translate for them while other members spoke in Pidgin English. One of them even made a joke with the city's name, saying, "I hope these two and a half hours were Fort worth it." The last of the confetti launched, the band members left the stage waving, and flood lights brightened a satisfied audience, which made its way outside the venue where many parents were waiting for their kids to exit.
KEEP THE DALLAS OBSERVER FREE... Since we started the Dallas Observer, it has been defined as the free, independent voice of Dallas, and we'd like to keep it that way. With local media under siege, it's more important than ever for us to rally support behind funding our local journalism. You can help by participating in our "I Support" program, allowing us to keep offering readers access to our incisive coverage of local news, food and culture with no paywalls.
Make a one-time donation today for as little as $1.