FIT Is Not A Supergroup 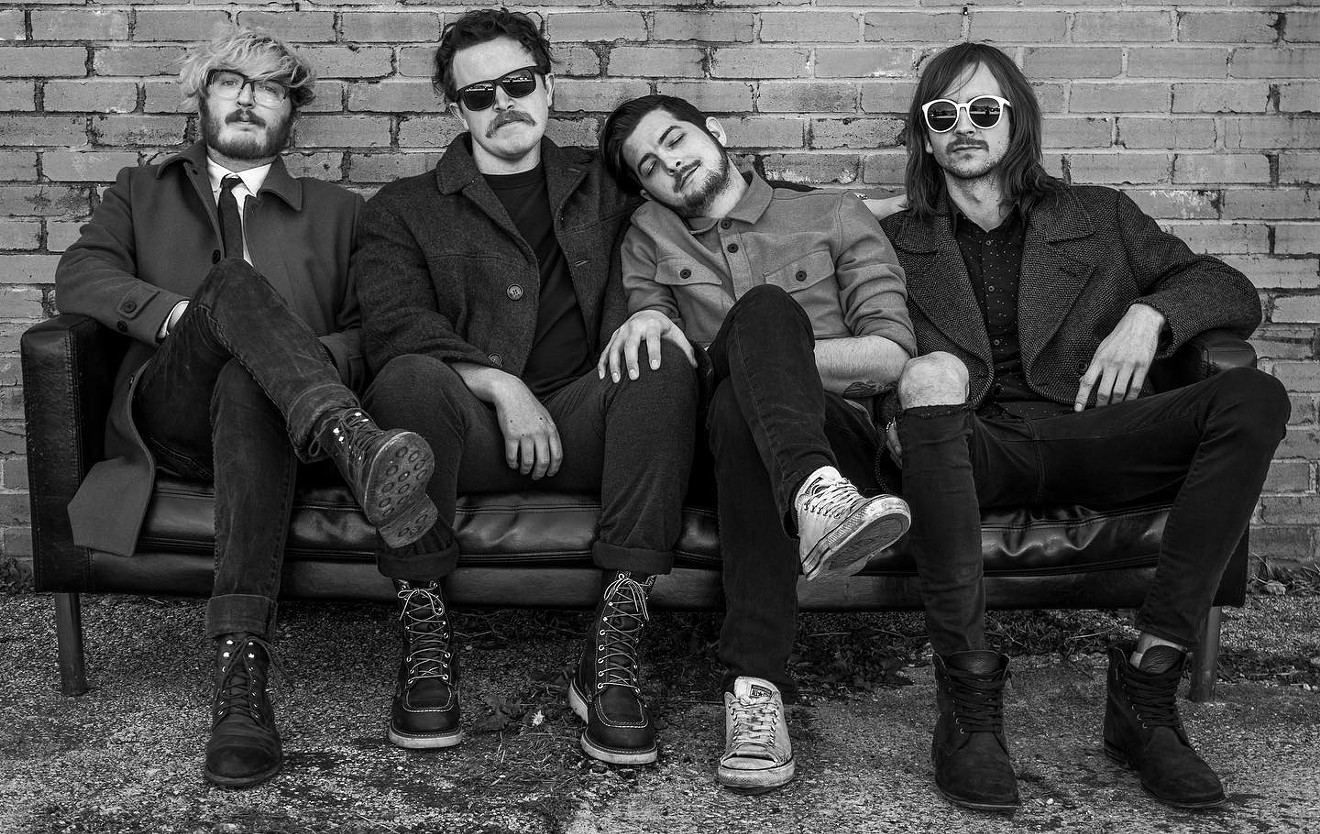 You may recognize the members of FIT from other bands around town, but don't call them a "supergroup." Caitlyn Lennon
FIT began as a conversation between two Hunters.

For some time, Hunter Moehring had been wanting to do a project aside from his work with Sealion to do something with his friend Hunter Cannon of Coywolfe, The Birds of Night and Strokes tribute band Different Strokes.

“Hunter and I had talked about doing a project together for a while, and I wanted Hunter to play guitar,” singer and lead guitarist Moehring says of Cannon, who's typically a drummer. “We were listing off bands that we like, and it felt like we were in the right place.”

Moehring and Cannon had tossed around names from the top of the indie charts: The National, Interpol, St. Vincent as well as dance-rock bands like Hot Chip and LCD Soundsytem.

Sitting around talking about what kind of band you’d like to start with your same-named friend is great and all, but for an idea to really grow, it sometimes takes the right set of circumstances on the right day.

One day, Moehring and Cannon had the day off and decided to actually play some music together. Moehring called up his old drummer from Sealion, Alex Poulos, to come jam with them. Poulos had been doing some collaborative work with Joel Bradley of Adam & The Figurines and Naked Furs, who decided to tag along with a bass to round out the sound of this spontaneously created band.

“I really want to do something more like what [Bradley] did with the Naked Furs because it was more intricate and actually had like a lot of depth to it,” Poulos explains. “Once you guys said we want something a little more, like subdued. I was like, oh, I know the perfect person. And we just kind of came together.”

“That first day ended up being the lineup,” Moehring adds. “It just felt right.”

Even with a sense of direction, the band’s sound grew organically beyond the scope of any of its members’ previous bands.

“It didn't really necessarily end up being what we at first imagined it,” Cannon says, “but it definitely has a bunch of those influences in it.”

There is something inherently early-Radiohead-esque about how the band has developed, playing its first experimental show at No Fest in November 2019.

“It just happened. I noticed for sure,” Cannon says. “I love that early Radiohead. I mean, they have the same kind of lack of genre that we have. It's like each individual song sort of plays in a different genre. I think that's how we maybe approach stuff a little more. It's like song-by-song, not necessarily the whole set or the whole sound.”

The variation in FIT’s songwriting approach comes as much from taking in inspiration from wherever it can be found as it does from actually working together as a collaborative effort.

"We listen to a lot of modern pop music and top 40 stuff like Charli XCX, and I'm really into the new Olivia Rodrigo album right now,” Bradley says. “It's so good! Just whatever's big, whatever's happening right now, whatever people are just really into. I think it's important to have your finger on the pulse of those things, too. It’s important to know what's really going on a global level.”

While each member of FIT is well known in North Texas for their roles in other bands, the members chuckle at the idea that they are a supergroup.

“Obviously none of us will be like the Traveling Wilburys. So, it's not like we're taking the biggest talents anywhere. It's just four friends that got together and created a band, and we just happened to play in other bands.” – Hunter Moehring


“I feel that's like a Hard Times headline: ‘They're Super Within a Half-Mile Radius,” Moehring says with a laugh. “Obviously none of us will be like the Traveling Wilburys. So, it's not like we're taking the biggest talents anywhere. It's just four friends that got together and created a band, and we just happened to play in other bands.”

FIT has more interest in striving to make the band something greater than the sum of its parts.

So, perhaps “supergroup” isn’t FITting, but the time each member has spent developing their talents elsewhere has given them the drive to be a better band without the young musician’s need for individual glory.

“We set the bar high for ourselves on purpose because we know when we can clear it and we can keep raising it,” Poulos says. “We’re getting better and better and better because we’re working with veterans and people we really admire. We don't take it for granted, and we totally appreciate what we're doing now because it's growing at an almost exponential level.”

“And,” Bradley concludes, “that's how you stay fit, baby!”
KEEP THE DALLAS OBSERVER FREE... Since we started the Dallas Observer, it has been defined as the free, independent voice of Dallas, and we'd like to keep it that way. With local media under siege, it's more important than ever for us to rally support behind funding our local journalism. You can help by participating in our "I Support" program, allowing us to keep offering readers access to our incisive coverage of local news, food and culture with no paywalls.
Make a one-time donation today for as little as $1.