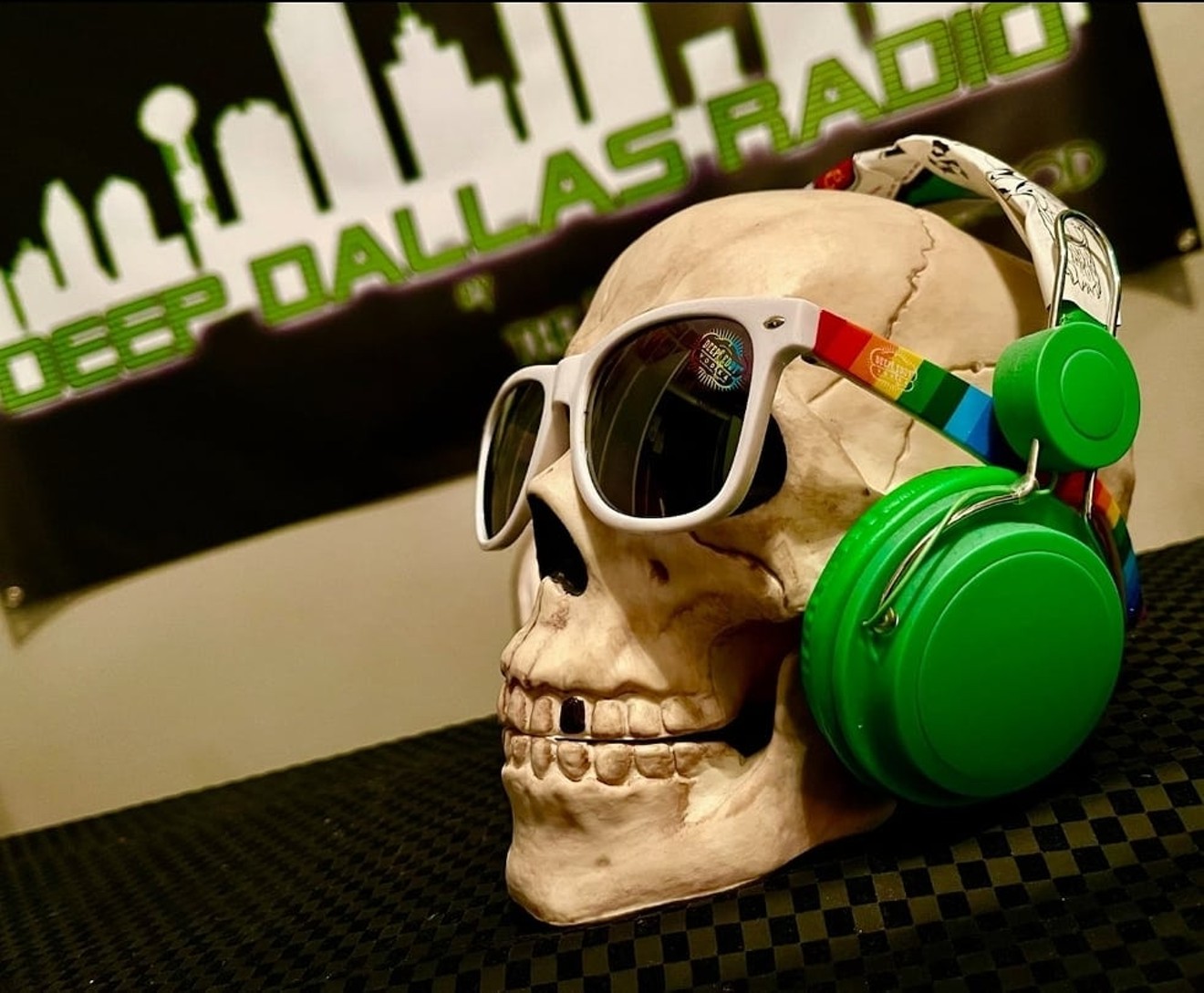 Deep Dallas Radio is blasting local independent artists through the airwaves. courtesy Deep Dallas Radio
Traditional radio is alive and well, even if streaming is overtaking the way we consume music. While being able to stream our favorite songs on demand with no interruption is great, there’s something magical about hearing enthusiastic radio personalities share their takes on music in between cuts and playing songs we have yet to discover.

That’s the exact feeling Bradley Amos sought to convey when he launched Deep Dallas Radio in August 2017. Out of an apartment in Deep Ellum, Amos, along with Amy Cook and Mike Bernal, created an online radio station showcasing the best of Texas' independent artists.

Amos was inspired to launch Deep Dallas Radio after attending a concert by one of his friends.

“I noticed that a lot of other musicians were there, watching the show, and then I got to talking to some of them,” Amos says. “A few had to leave early to get to the other side of town to go watch another show, and it really brought this picture in the light of this network of local musicians supporting each other. I know that's not frequent or common everywhere, but it really stood out to me.”

He later got together with Cook and Bernal and brainstormed the idea of a radio station giving airplay only to independent musicians and musicians from Dallas. Over the first two years of Deep Dallas Radio, much of their time was spent building the repertoire and connecting with local musicians.

Now, Deep Dallas Radio’s collection has expanded beyond Dallas, playing artists from various parts of Texas. While many of the artists Amos and crew play are actively present online, Amos built the station’s collection with tangible music formats he’s purchased at concerts and shows over the years.

“I thought radio specifically gives an opportunity for some of these bands to be heard,” Amos says. “Not all of these bands are out there on streaming services. You're going to find them on small servers like Bandcamp, some might be on a Spotify playlist, but they're kind of all over the place.”

You can listen to Deep Dallas Radio online at Live365, Apple Radio or Tune In. At all hours of the day, you'll hear music from several artists, as well as radio shows from personalities throughout Texas.

One of these shows is Metal Mayhem, hosted by Metal Goddess Jen. On the syndicated show, Jen plays new music from Texas-based metal and rock bands and offers exclusive interviews.
click to enlarge


“[Deep Dallas radio has] been very supportive in allowing my show to air on their station,” she says. “I really love indie and unsigned artists, and that’s the bulk of the show I syndicate ... It’s a pleasure to be able to play these bands, show them support while introducing them to listeners. Deep Dallas Radio is an excellent platform, and I’m honored they air my show.”

Deep Dallas Radio is committed to giving artists a platform to share their stories outside of music and promote their works. Singer-songwriter Remy Reilly says the station has been supportive of her since the early stages of her career.

“[I am] grateful to be a part of the community they serve,” Reilly says of Deep Dallas Radio. “I love their variety in music and content; they have promoted my shows, music and given me a platform to speak about life.”

Deep Dallas Radio plays mostly rock, alternative and indie sounds, but not a lot of hip-hop or country, though Amos says he has considered launching separate stations for the abundance of talent in those genres.

On Aug. 13, Deep Dallas Radio will celebrate its fourth anniversary at Six Springs Tavern in Richardson. Amos and crew are currently working on putting together a "bill of four or five” local bands and setups from local partners, including children’s music academy School of Rock.

“School of Rock is bringing up that next generation of rock stars,” Amos says, “and we want to support and promote them.”
KEEP THE DALLAS OBSERVER FREE... Since we started the Dallas Observer, it has been defined as the free, independent voice of Dallas, and we'd like to keep it that way. With local media under siege, it's more important than ever for us to rally support behind funding our local journalism. You can help by participating in our "I Support" program, allowing us to keep offering readers access to our incisive coverage of local news, food and culture with no paywalls.
Make a one-time donation today for as little as $1.