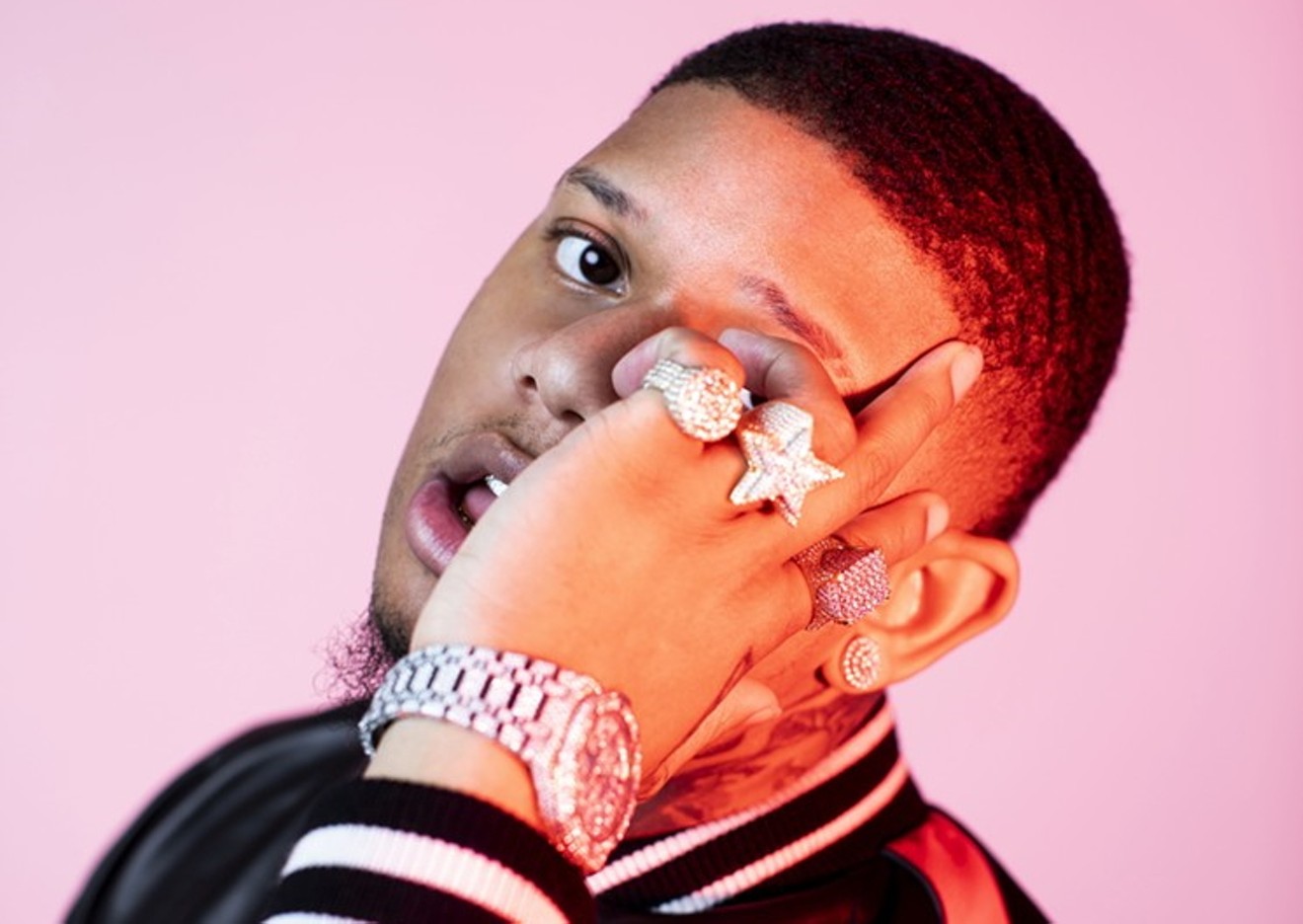 Yella Beezy rose from Oak Cliff to the top of hip-hop, and he's ready to help pull up other Dallas rappers behind him. Cam Kirk
In less than a year, 26-year-old Deandre Conway, better known as chart-topping recording artist Yella Beezy, has become one of the biggest new stars in music. His meteoric rise includes No. 1 hit "That's On Me," a stint as an opening act on Beyoncé and Jay-Z's "On The Run II Tour" and collaborations with Pharrell Williams, Chris Brown and T.I.

"I be wanting everybody to make it. If you from where I come from, especially from my city and my set ... it's enough money to go around. I ain't the type who's stingy with the spotlight or tryna keep people in the background, nah. It's cool when one person doing it, that shit look good when it's a team doing. Clique gonna look better when you all shining together."

So who's next? In no particular order, here are 10 Dallas rappers on the verge of becoming the next superstar.

A longtime Yella Beezy collaborator, Trapboy Freddy has already been selected next up by the "That's On Me" star himself. An Oak Cliff representer like Beezy, Freddy manifested his signature sound with his in-ya-face first hit, "Halo." Foundation laid, Freddy built a cult-like crowd of 355,000 Instagram followers with gritty raps and a charismatic look amplified by slick dance moves. His catalog includes trendsetting visuals like "Goin Straight In," "LA" and "Where I'm From."

He appears on Beezy's new project, Baccend Beezy, on the track "Baguettey." This year, expect to see Freddy come into national prominence with the late-2019 release of his highly anticipated next project led by the single “Trap” with popular rapper Young Dolph (“Pulled Up”).

“He [Trapboy Freddy] gon’ continue to do his thing as long as I’m doin’ mine and vice versa,” says Yella Beezy to DJ Vlad. “We got some more people up under us whose about to go off.”

In September, Freddy accomplished the biggest moment of his career yet as he made his major television debut in an introductory performance for Boxing’s WBC/IBF Welterweight World Champion and fellow Dallas-native Errol Spence Jr. for his unification bout victory over Shawn Porter. Freddy was exposed to an attending audience of 20,000 at Los Angeles’ Staple Center and 350,000 pay-per-view buyers worldwide.

Trapboy Freddy’s new audience was instantly reflected in his streaming numbers. Last week, he released the video for his latest single, “Lil Quita” which has soared beyond 700,000 views on Youtube in only a matter of days.
Tay Money

Not too many rappers in Dallas or in the U.S. can bring the whole city out for their own day like Tay Money did on her inaugural “Tay Day” last April at the Granada Theater, birthing the massive fan base “Tay Money Army.”

She's now at the top of Dallas' hip-hop scene, and her stock continues to skyrocket with potentially her biggest hit yet in “High School.”

This year’s Dub Show headliner closes out 2019 with a trio of videos for buzzing singles “Imax,” “Ride Around,” and the YNW Melly-featured, “Left Cheek, Right Cheek,” which has  1.3 million views. 2020 promises a star-studded follow up to DUH!.

Fort Worth’s Go Yayo has been given a second chance at a first impression.

Making noise since 2016, at his peak Go Yayo received offers from several high-profile label executives, which he declined to further explore his free agency. In 2017, Yayo became mostly known for his violent altercations rather than music, and he disconnected from fans. Taking time to reestablish his Super Sayian sound, with the release of his 1.6 million-viewed hit single "Countdown" (2018), Go Yayo skyrocketed back to the top of the local scene.

The past behind him, with major co-signs from today's hottest acts DaBaby and Stunna 4 Vegas and a new song coming out weekly, Yayo will be back in label negotiations soon.

We recognized the Oak Cliff native in 2018 as our potential choice for XXL magazine's annual Freshman Class. T.Y.E. (The Young Enlightened) embodies all the traits of a next ASAP Rocky, J.Cole and Kendrick Lamar: superior lyrical abilities, real-life storytelling and comic relief. His use of personal traumas as artistic therapy made his debut album, 32, a millennial must-have and made him a breakout star.

Now a high-profile artist, T.Y.E. uses his platform to bring attention to the severity of mental health problems in the urban community.

T.Y.E. legitimizes his Oak Cliff roots by showcasing his mixed personality of “Oak Cliff or Nothing” street talk and introspective wordplay he calls “voices.” Able to tap into various styles of rap at will, backed by his steadily growing 13,400 Instagram followers, T.Y.E. has found his own fast lane to the top.

With Tr:32 (Empty the Clip), 32, Tr:32 (All About Money) and 2019's Tr:32 (Voices), T.Y.E. has created a catalog of essential material. Secure in his artistry, vision and direction, he is moving through the city on his own terms and will land a major deal in no time.

Splurge's music is Dallas' worst nightmare unleashed. Last year, the Arlington native released his mixtape Splurge GO! to stellar reviews, which labeled the project rowdy, hostile and ruthless. The project introduced us to a series of breakout visuals like "Tear It Apart," "Steve Nash" and "Intro Part 2." In February, Splurge earned his first million-viewed video for his single "UK Talk."

Critics identify Splurge as the next Chief Keef because of his similar youthful high jinks and street mentality. He displayed those traits to a sea of fans at his first sold-out show in Dallas in October 2018 at The Curtain Club. The gun-toting wild child has accumulated over 287,000 Instagram followers.

From the Allen suburbs, Sadfacethuggin is doing 100 in the wide-open emo hip-hop fast lane right now. In 2018, he sparked buzz with his debut effort, sadface, a four-track story of drug abuse and heartbreak over moody trap production, led by the hit "Fuck Luv."

After a big push, Sadfacethuggin turned a critically acclaimed original into a captivating trilogy (Sadface II, World of Sadface), with a collection of heavily streamed hits like "illuminati," "detonator" and "2 cancer," making Sadfacethuggin a rap force.

Riding a popular and lucrative new wave in emo hip-hop. Sadface is merely minutes away from having a “breaking the internet” moment. Stay tuned.

Most new artists focus on their hip-hop starter kit (chains, fashion) upon finding success. Fortunately, Camp Zeroo is not just any rapper. His commanding stage presence, exuberant style of rap and lyrical prowess have shared the stage with Drake, Wale and Rick Ross.

He found notoriety with his 2018, 3 million-stream No Pressure series. The rising star puts his music earnings back into the community through various donations, including school supplies, lunch money and emergency relief funds.

Currently on his 11-city Streets Most Wanted Tour, Zeroo’s new hit “Busy,” powered by Dallas’ HalfpintFilmz, is the No. 1 added club song in America.

He's best known for his 2008 Billboard hit “Rack Daddy” (which peaked at No. 14). In the last decade, Oak Cliff’s Fat Pimp has endured monumental highs and career-damaging lows in the music industry. Once signed to Warner Bros, the deal fell apart over contractual disputes, and Pimp found himself starting over as an artist in 2014.

Even with setbacks, Fat Pimp has always been regarded as a talented wordsmith and producer. Combined with a comedic persona, he found resurgence in 2015 with the 2 million-viewed video “Uh Oh.” After successful tour runs with Lil Ronny MothaF and YG, Fat Pimp rose again earlier this year with his single, “Wax On, Wax Off,” which accumulated more than 100,000 streams.

He's respected and recognized as an artist to follow by 97.9 The Beat. His album Still Fat Pimp is another standout filled with high-energy, thought-provoking lyrics and life lessons. Deal or no deal, this artist’s comeback story is already paying off immensely.

The Observer has followed veteran trap rapper Lil Ronny MothaF for years. Ronny's 2013 hit "Circles" made him a mainstay with recognition from Beyoncé, T-Pain and YG. Once Queen B sampled the song during her festival performance, Lil Ronny's social media presence skyrocketed to 146,000 followers.

Born Ronny Wright Jr., he released his debut album, The Mothaf'n Legacy, in 2017 following a 16-mixtape library that he started building in 2010. His popularity stems from his lyricism and fast-paced delivery. He has collaborated with most of Dallas' brightest stars, and his music is frequently used by professional athletes.

With his astonishing résumé, niche sound and lucrative regional touring circuit, it's incredible that majors have not called up this top prospect from the minors already. But hip-hop has a lengthy history of indie artists finding chart-topping success without signing to a major label (Chance the Rapper, Tech N9ne).

On the rise, Mo3 distinguished himself with violent crime stories and an onslaught of diss tracks aimed at fellow Dallas rappers. Best known for his absurd hit "Hold Ya Tongue" (2014), Mo3 rose to prominence with his breakout Shottaz mixtape series (Shottaz Reloaded, Shottaz 3.0). Living life on the edge has paid off handsomely for the new sensation with 369,000 YouTube subscribers and 168,049 monthly listeners on Spotify.

Now on the road, Mo3 is headlining his very own 20-cities, “Osama Tour”. With a highly-anticipated collaborative project with Lil Boosie, titled, Bad Azz Mo3, Mo3 campaigns with his new single, “Ride for Me”

Yella Beezy's Baccend Beezy is available on all major streaming platforms via Hitco.
KEEP THE DALLAS OBSERVER FREE... Since we started the Dallas Observer, it has been defined as the free, independent voice of Dallas, and we'd like to keep it that way. With local media under siege, it's more important than ever for us to rally support behind funding our local journalism. You can help by participating in our "I Support" program, allowing us to keep offering readers access to our incisive coverage of local news, food and culture with no paywalls.
Make a one-time donation today for as little as $1.